The other day while picking up a few things at Target I was drawn to the card aisle, and for some reason my usual will power when it comes to avoiding retail wax let me down.  The result was this value pack ending up in my checkout basket: 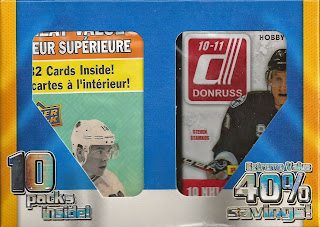 I'm sure you've seen these before, or at least something similar.  10 different hockey packs for $11.99, not a bad deal for just over a buck per pack.  I usually stretch wax packs out quite a bit, so it should take me weeks before I get through all 10 of these.  So far I've only opened the first pack, which was the 2012-13 O-Pee-Chee rack pack visible on the front.

I think this rack pack was probably what drew me to the purchase (it certainly wasn't the other visible pack of Donruss!).  I don't really chase too many modern sets anymore, but I kind of view O-Pee-Chee hockey like I do Topps baseball, meaning I'll gladly accumulate any base cards as well as select inserts.

If nothing else, these rack packs definitely provide some value at 32 cards (originally priced at $4.99), and I'm generally a fan of the retro parallels that are included in the set each year.

This was the perfect pack to end up in this mix as far as I'm concerned, given that I have only a handful of 2012-13 O-Pee-Chee cards, just a couple of base cards that came from a re-pack and one or two parallels/inserts that I've bought as singles over the years.  As it turns out, I didn't have even one of the 32 cards included in this pack, so I was happy with that.  A few of the cards on the bottom of each section were damaged due to the way it was packaged up, and another base card got sent off in a package to Douglas from Sports Cards from the Dollar store.  I ended up with about 25 cards for my collection when all was said and done.  I won't bore you with scans of every single base card from a set that's now a few years old, but I did pick out a few select favorites. 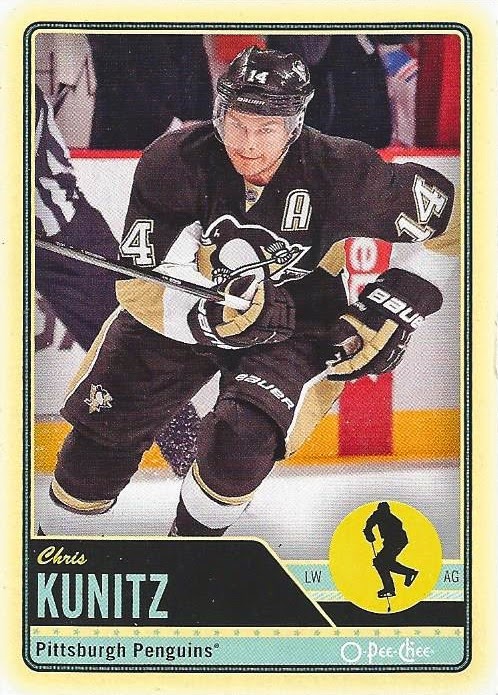 This pack was chock full of stars that are still playing with the remaining 8 teams in this year's Stanley Cup playoffs.  The design isn't the most exciting, but it's better than some years and at least the word O-Pee-Chee is relatively small on the card fronts in this release.

In retrospect I probably should have dropped this one in the envelope for Douglas as well since he's a goalie mask guy and this is an interesting one.  Douglas, if you don't have this card let me know and I'll put it in your stack for next time. 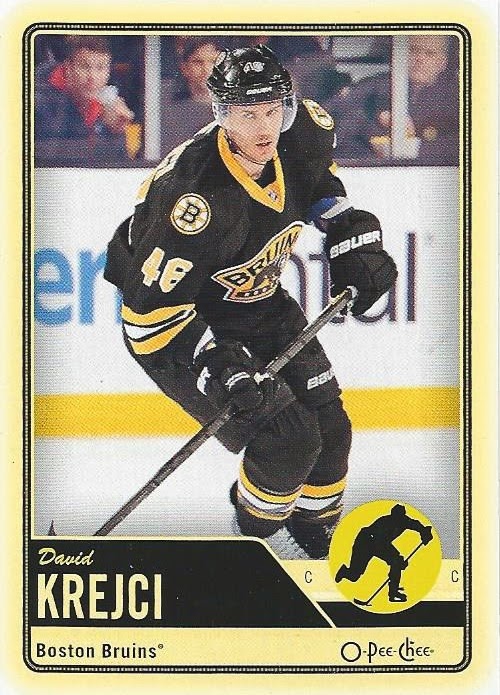 The highlight of the pack for me was a brand new David Krejci card.  I don't consider myself a player collector really, and abandoned my hardcore Krejci collection long ago, but it's still nice to pick up a new card of the guy who's been my favorite NHL player for a few years running now.  David needs to wake up and pick up his play in the 2014 playoffs though for sure... 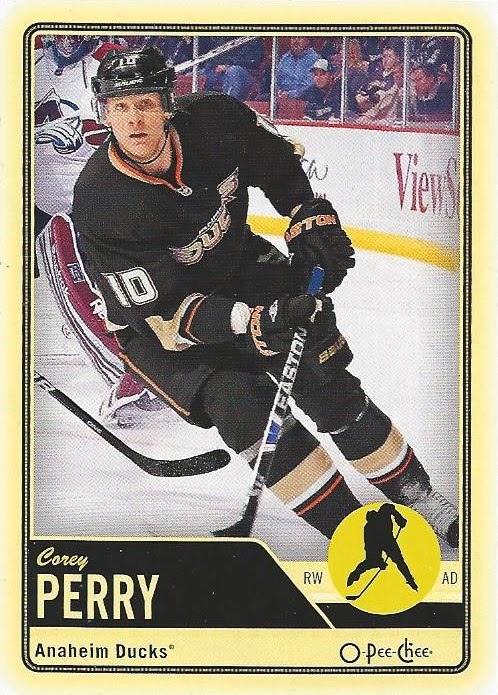 I'm rooting hard for the Ducks in the West, mostly because I'm sick and tired of the Blackhawks always winning and secondly because I wouldn't mind seeing Selanne raise the Cup. 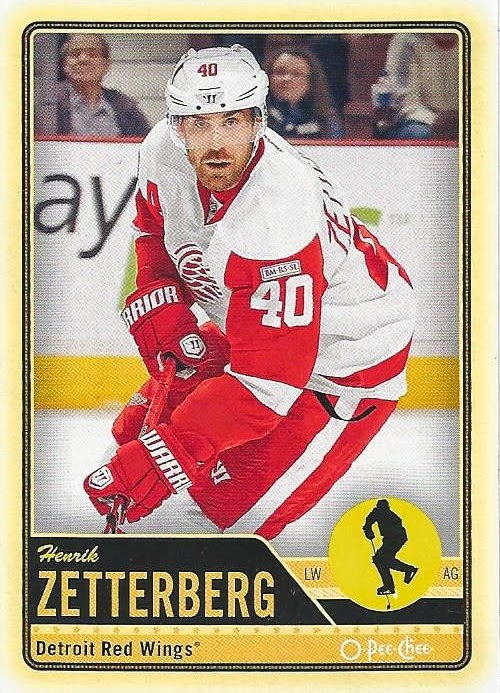 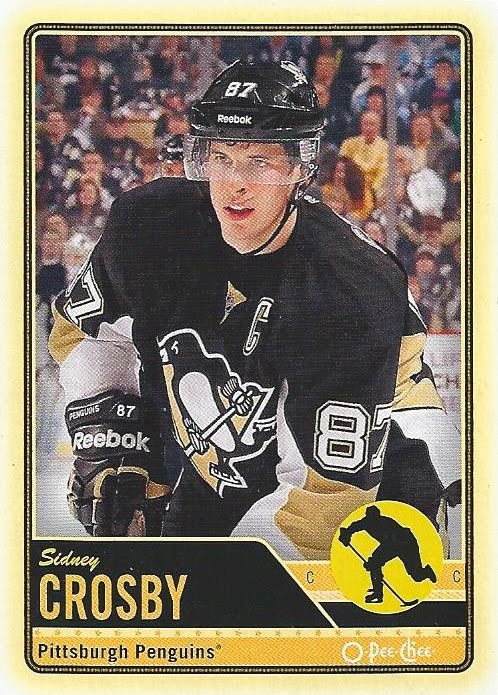 Any time I pull a Crosby or Ovechkin I consider it a win since odds are I would never find those guys on the cheap like in a dime or quarter box. 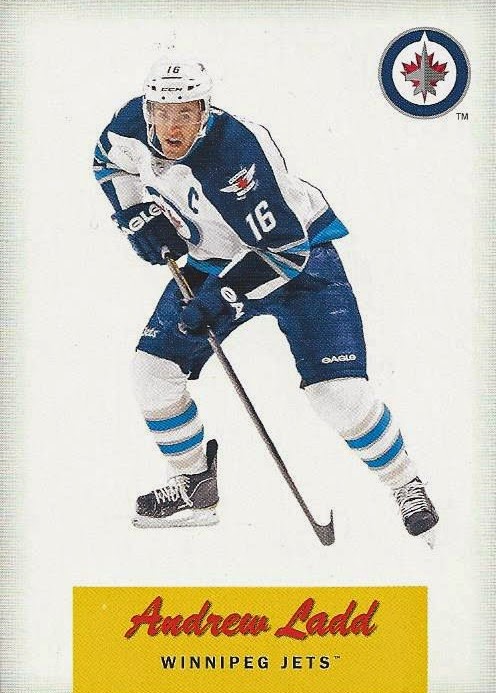 Finally, my inserts.  My retro parallel was Andrew Ladd of the Jets, not really one for my collection so I'd be willing to send this off if anyone wants it.

Same for my other insert, this Stephen Weiss sticker.  Love the concept of the sticker insert, don't really love the Florida Panthers.  Would be happy to trade this away as well.

That's it for today, I'm off to Fenway Park to soak in my first MLB game of the 2014 season!  I'll have some of the other packs posted in the coming weeks when I get the urge to rip...
Posted by shoeboxlegends at 2:18 PM

Yup so far I'm satisfied, we'll see how the other 9 packs play out!