If you read many of my posts, you might get the impression that all I do is buy vintage singles, and that I'm against purchasing modern product.  The truth is, I love the anticipation of ripping open a pack as much as the next collector, I just feel that often times the value isn't there, and I then suffer from buyer's remorse.  My solution to that is to keep a stash of unopened product (obtained on the cheap) in my card room so that I've got packs at the ready whenever I get the itch.  The top shelf of  my bookshelf is dedicated to this, in fact here's how it's looked for the past 2-3 years now: 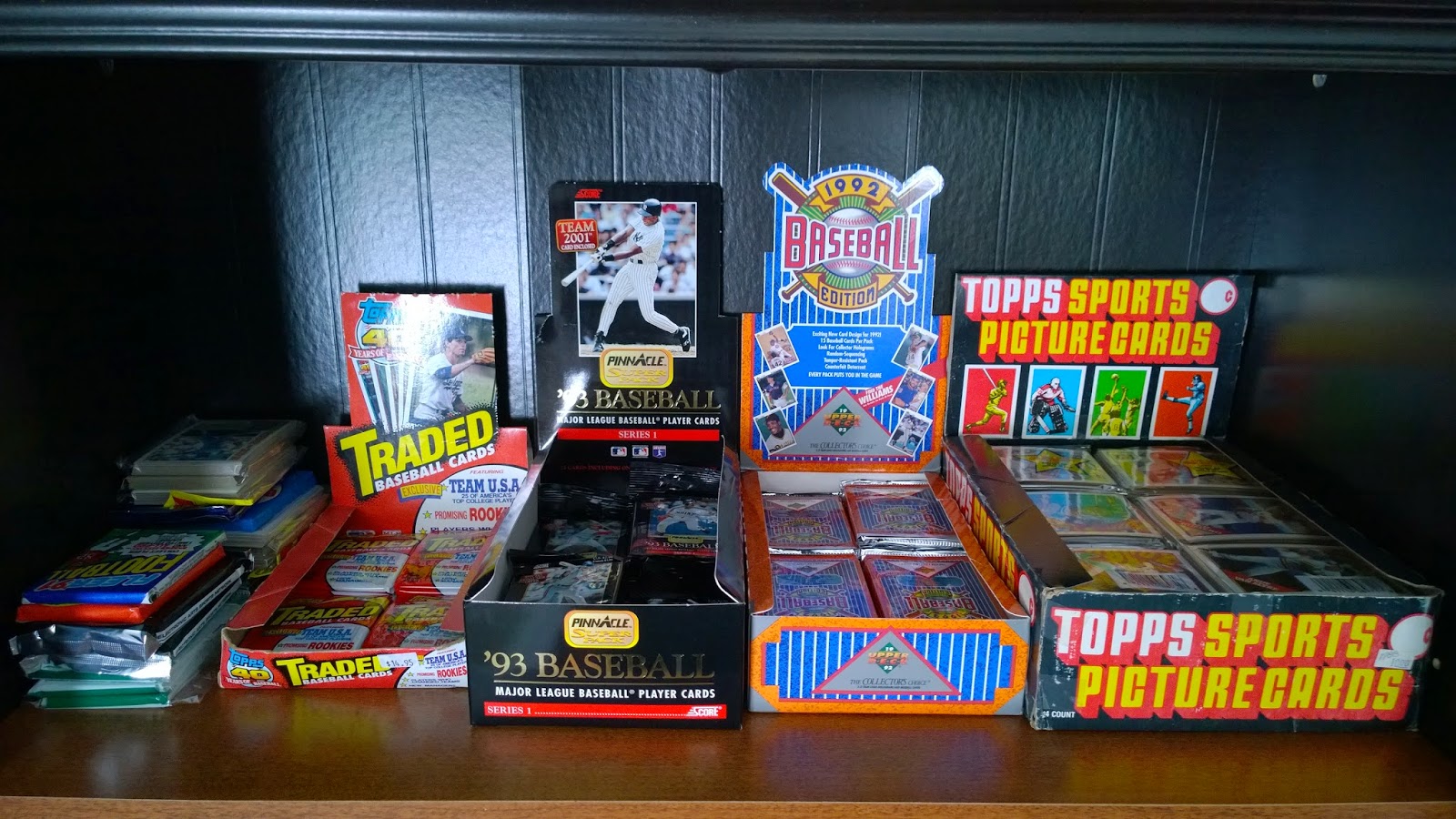 If it's a bit tough on the eyes you can click for a larger image.  At the far left, we've got a couple stacks of random packs, everything from an '84 Topps baseball rack pack to 1991 Fleer football to 1995 Topps Embossed baseball, and some hockey thrown in too.  Continuing to the right is a wax box of 1991 Topps Traded baseball plucked from the hobby shop around 3 years ago for $5.  Next in line, a box of 1993 Pinnacle fat packs, which I've been sending out to other bloggers in trade packages.  After that, my current favorite go-to option, a wax box of '92 Upper Deck baseball, a set I'm working on hand collating.  Last but not least, to the far right a box of '88 Topps rack packs.  Paid $10 for this about 5 years ago at a hobby shop and have opened exactly 2 packs so far.

I'm grateful that I have the space and will power to keep something like this, but I have to say I've been a little bored by the selection lately.  At this point I'm really just sending the Pinnacle stuff out to others, don't plan on opening any more of it myself, so I decided to remove that and find a replacement.  Well, it just so happened that last weekend Dave & Adam's Card World had some pretty unreal prices on a lot of their unopened wax as part of their Memorial Day sale.  Here's my replacement for the Pinnacle box: 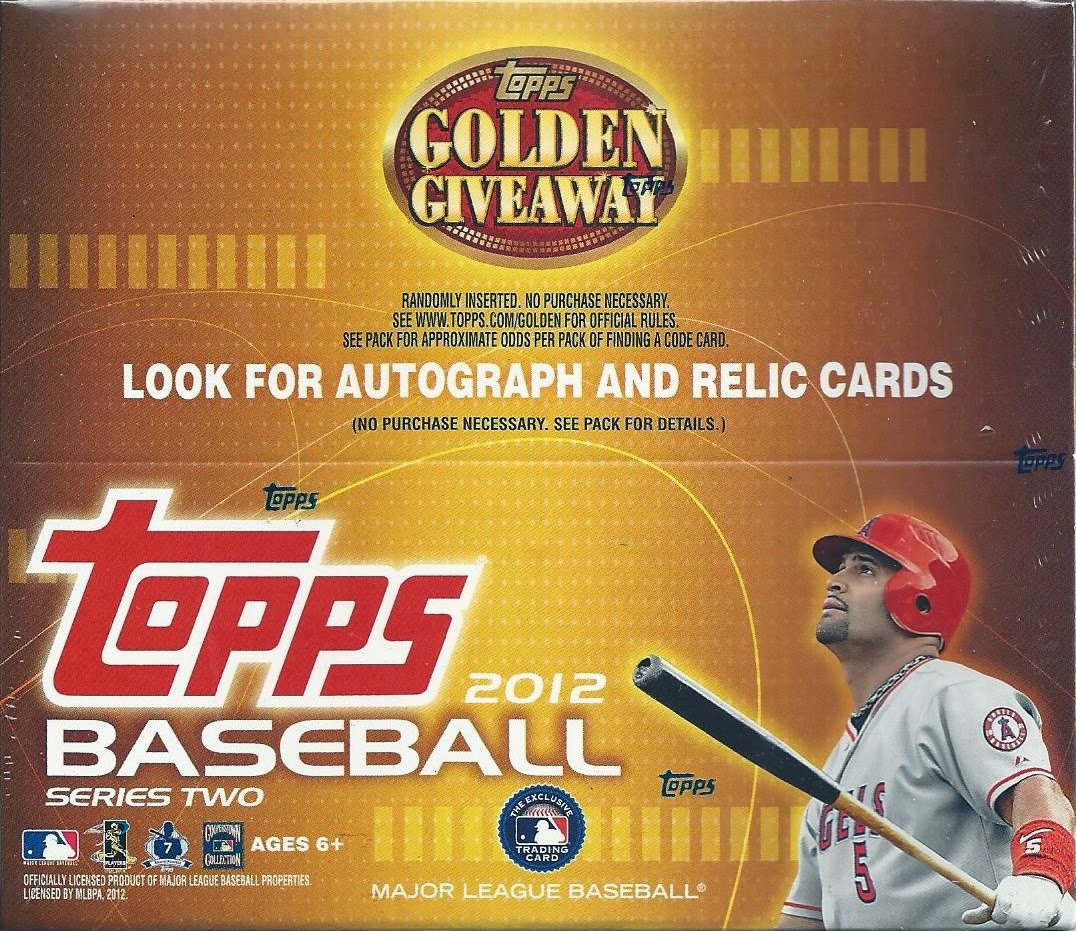 This is a retail box of 2012 Topps Series 2 baseball.  24 packs in all, and unlike many sets it has a decent pack size of 12 cards per.  This is basically the display box you'd be buying your single loose pack from in your local big box store back in 2012, here it is opened up: 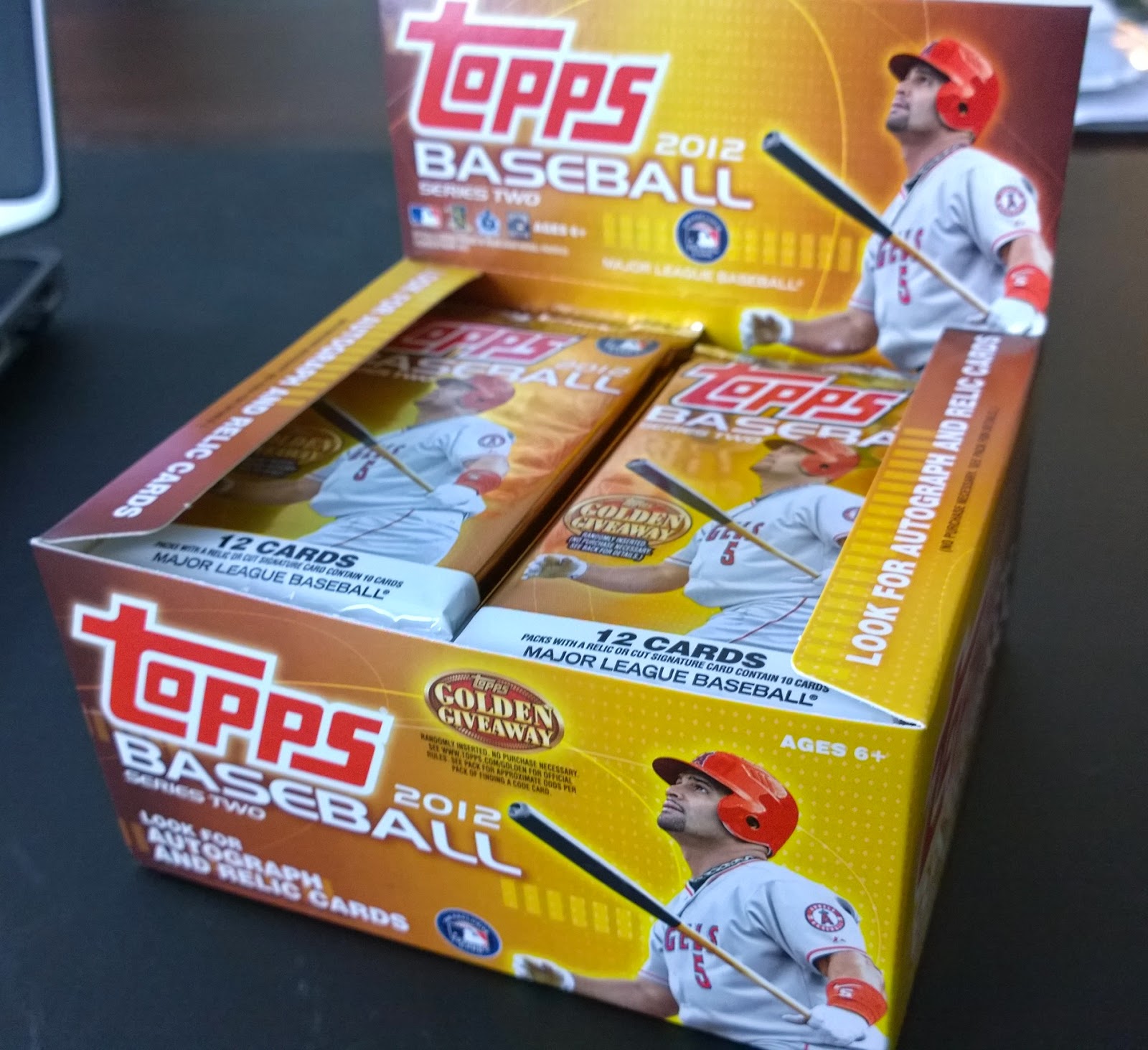 I chose this for a couple of reasons.  First of all, I'm sort of a classic collector in that I'll always gladly accept nearly any flagship base card that I don't already have.  I have next to nothing from the 2012 base set (6 total Red Sox cards obtained in trades, only 2 from Series 2), so I know that virtually every card from this box will be a keeper for me.  Secondly, the price was $14.95!  For $5 less than a blaster I've got 24 packs to rip through over time.  That's $.62 per pack, so if I get a total dud I can forget about buyer's remorse since you pump more than this into a vending machine for a candy bar nowadays. 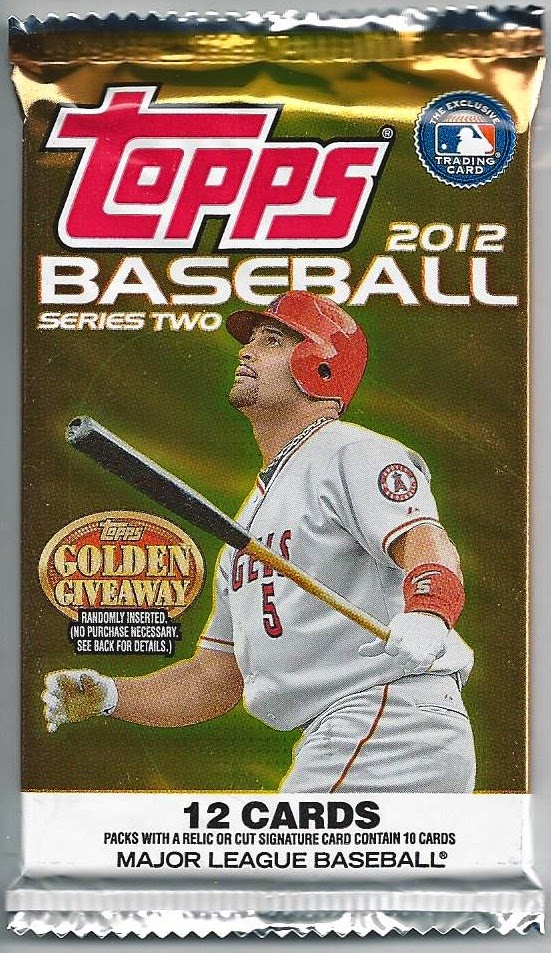 I do have a tradition where anytime I plop a new box on my shelf I have to open that first pack, so here's a sample of what awaits me in the future with the top pack from the box... 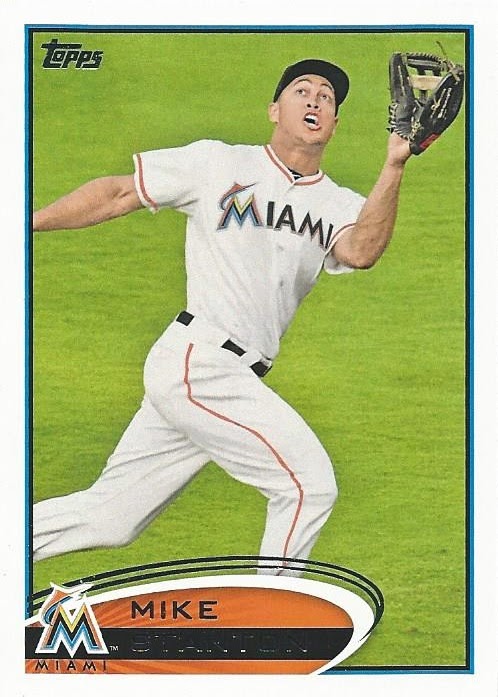 Can't get off to a much better start to the box than this.  This is Stanton's last flagship card on which he's referred to as Mike, beginning with the 2013 set it's Giancarlo.  Whatever he wants to go by, he's crushing it this year to the tune of .317/16HR/51RBI and an OPS over a thousand. 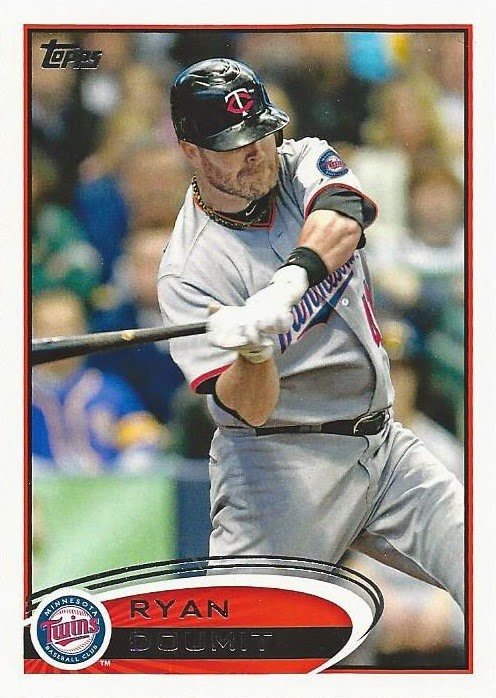 Don't know much about Ryan, he's now with the Braves.  One gripe about this set is the lack of player position on the front. 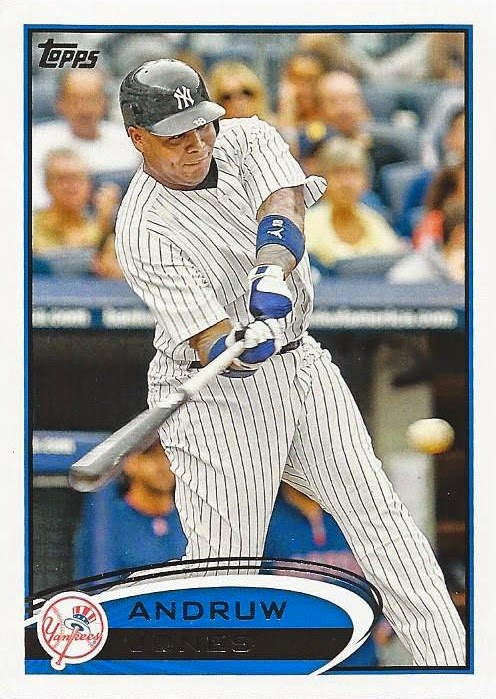 Kind of a cool card, since it looks like 2012 was the end for Andruw Jones.  He's 37 now and playing over in Japan.  This is not his proper "sunset card" though, since he did appear in the 2013 flagship set. 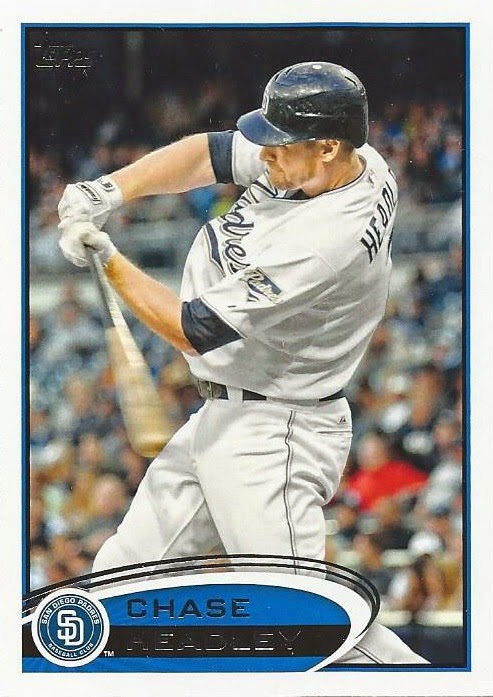 Boy has this guy been in a decline the past couple of seasons.  I like that this card is from his career monster season, which it appears as though he may not come close to achieving again. 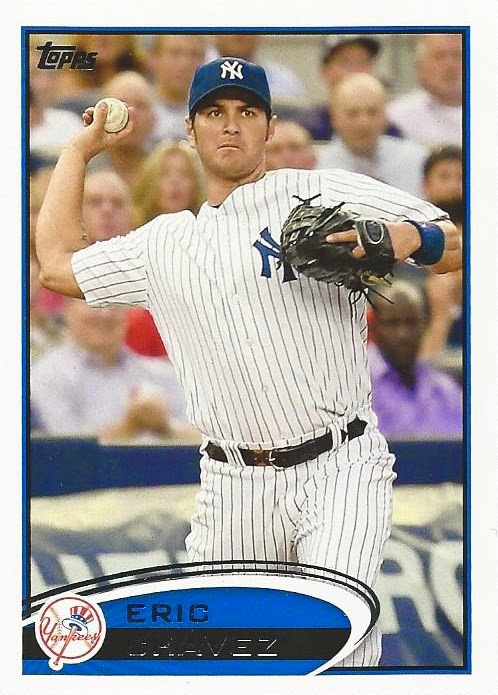 After all those years in Oakland, and all those Chavez A's cards pulled from packs, it's weird to see him in another uniform, especially the pinstripes.  He's with the D-Backs now... 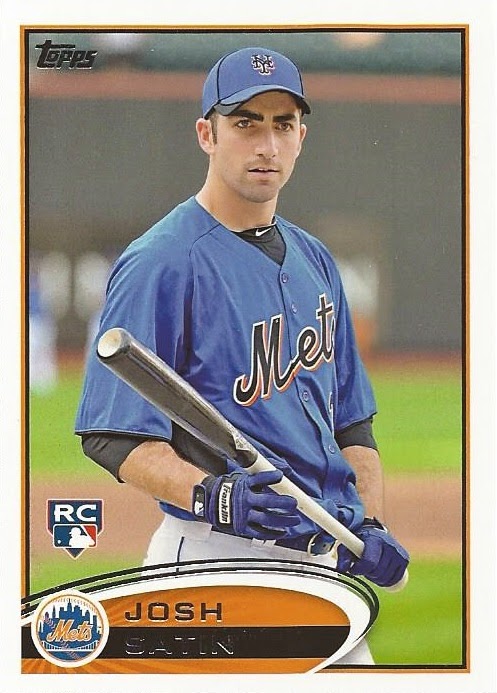 Had a decent 2013, appearing in about half of the Mets' games, but has struggled mightily in limited time this year.  Just 3 hits in 34 plate appearances, yikes. 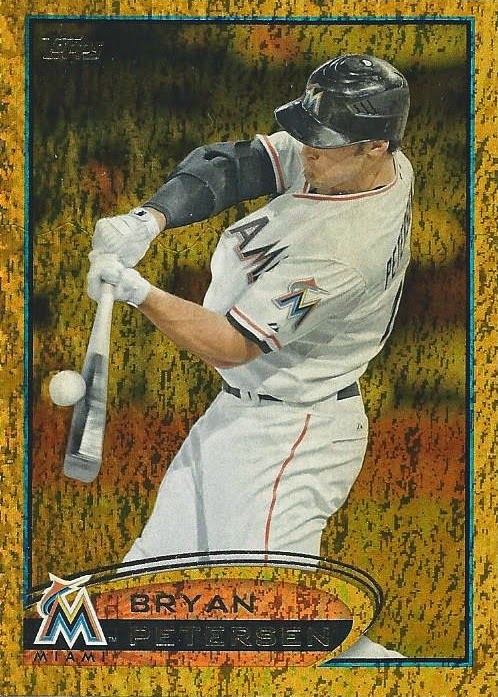 I forgot about these Golden Sparkle parallels.  Bryan hasn't played an MLB game since 2012.  He signed a minor league deal with the Rangers this off-season and is currently playing with their AAA affiliate.  This one's now on my Zistle trade list. 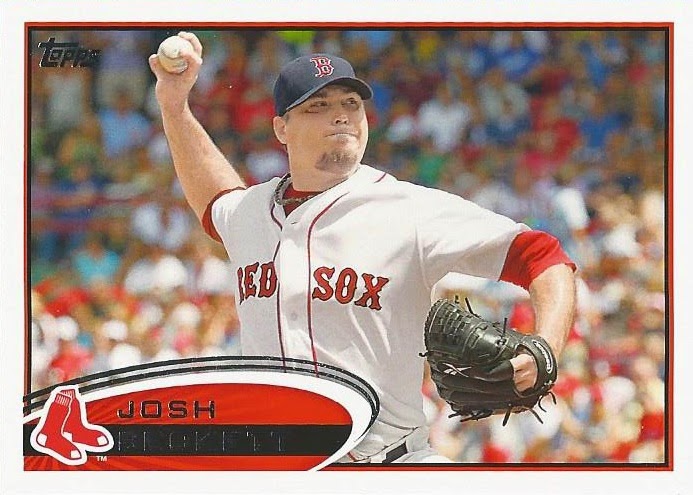 Awesome, a new Red Sox card for me, and of the most recent guy to throw a no-hitter no less!  Still glad the Sox made the trade, there would be no 2013 World Series Championship without that deal. 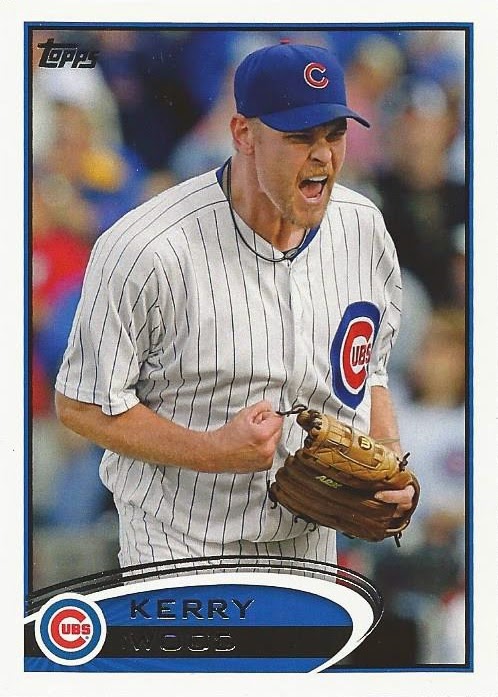 Great shot of an electrifying pitcher.  Wood's career ended after 2012, and this is actually his final Topps base card, he wasn't in 2012 Update and was only on an insert in 2013 Topps, no base. 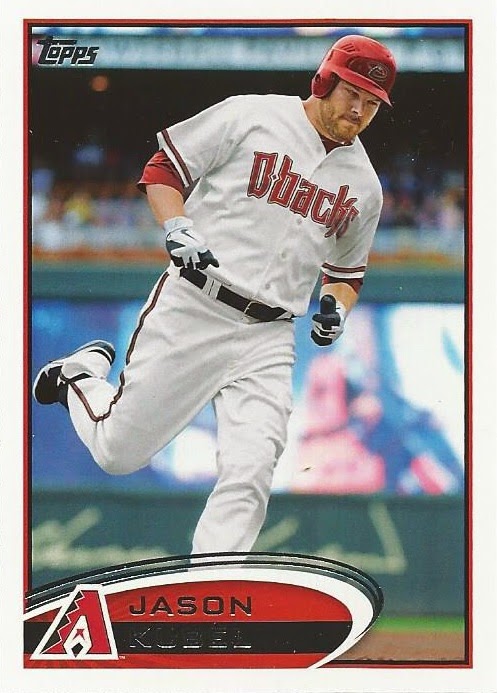 To me, the most boring card in the pack.  I don't catch as much NL baseball as I should, and couldn't really tell you much about Jason Kubel.  Looks from the stats on the back like he had a couple of monster years in 2009 and 2012. 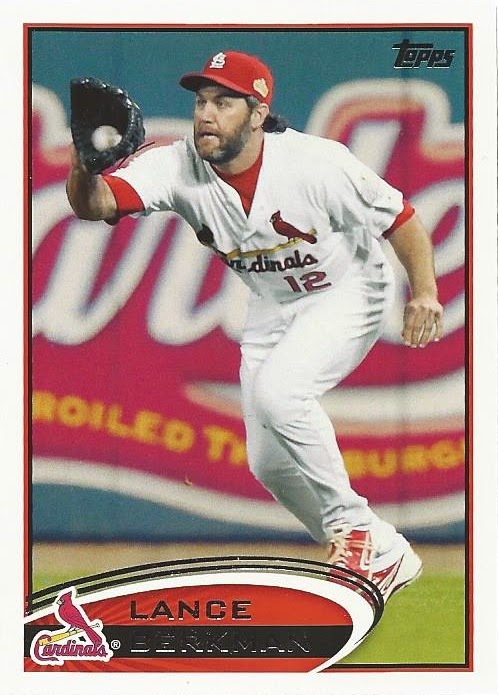 Great shot of Lance making a catch in front of an ad for broiled turkey burgers that looks oddly like the Cardinals logo. 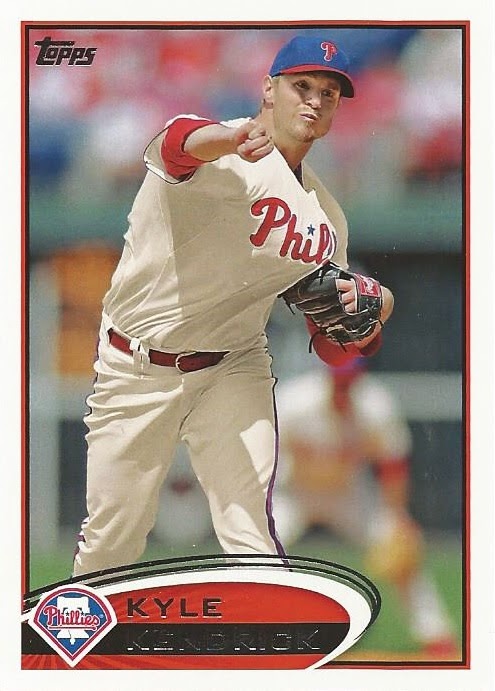 Don't know much about Kyle, career-long Phillie who's about a .500 pitcher with an ERA over 4.00.

That was a very solid first pack, hopefully a sign of things to come.  If I rip this box at my usual rate I'll be done sometime in 2020. 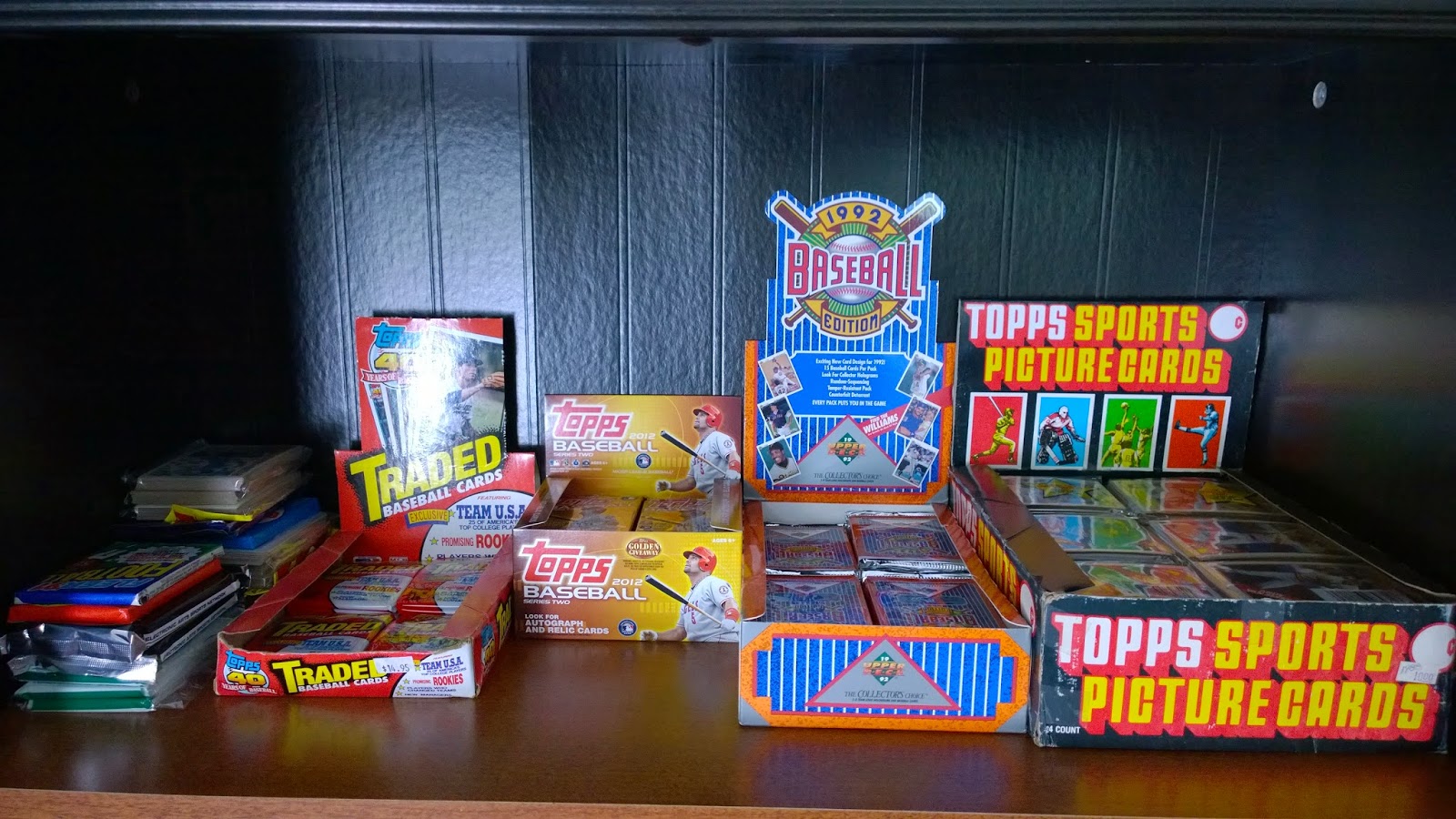 There we go, much better!
Posted by shoeboxlegends at 11:30 AM

Great deal on the box and a nice pack to start it off.

Wow, nice stash! I'm not sure if I would have the discipline to not open them.

View From the Skybox said...

Jones smacked a 3 run walkoff home run last night in a 3-0 win for the Rakuten Eagles.

Congrats on a good deal!

Very cool. I'd totally steal your idea if I had the following two things...

A. Willpower
B. The Space