Each year I tend to pick up just a single retail blaster of Upper Deck's flagship hockey release around the holidays.  I guess it's habit more than anything, I haven't completed this set in years but I like to get a small sampling and it's always fun to rip open some packs for a change of pace. 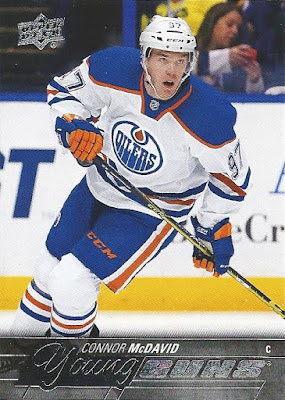 Last year my luck was absolutely incredible, as the very first pack I opened contained the card everyone was searching for, Connor McDavid's Young Guns rookie!  Would my hot streak be extended?  Was there an Auston Matthews or Patrik Laine Young Guns waiting for me in this year's blaster? 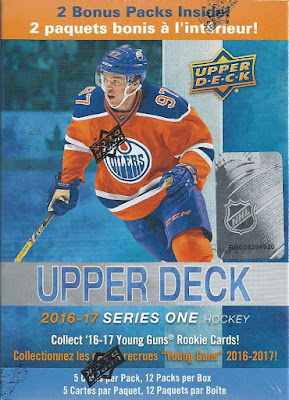 Here's the blaster I grabbed.  More Connor McDavid, as he's the poster boy for the flagship release this season.  Twelve packs in a blaster, so you're paying less than $2 per pack... 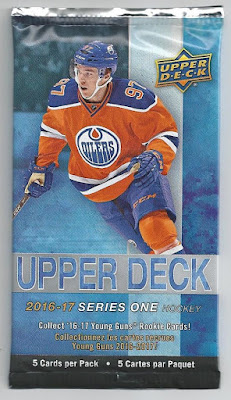 ...however as you can see here you get just five cards per pack.  So, 60 cards in a blaster, or 3/$1 essentially.  These have been out for a few weeks, and I'm sure you've probably already seen them elsewhere, so I'll skip showing every single card and instead just pick one favorite from each pack. 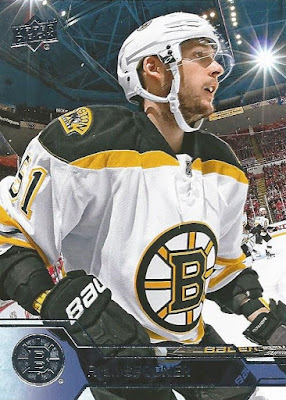 The very first card to greet me from the blaster was Bruins forward Ryan Spooner.  You'd think this would be a good omen for a B's fan like myself, but as you'll see below you'd be wrong.  I do like the design this year.  The foil makes the player names difficult to read when scanned, but in hand they're not so bad. 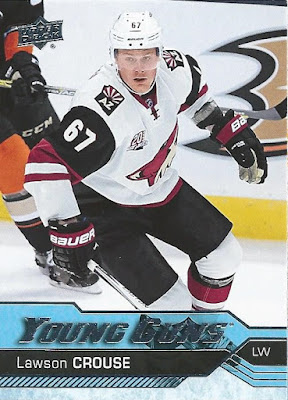 Pack 2 yielded my first Young Guns rookie short print, left winger Lawson Crouse.  I admit that I am not familiar with Lawson, he's a -11 with 3 points in 31 games with the Coyotes so far this year.  Yikes.  In fairness, this kid is still just 19 and I guess I should be grateful that I pulled someone who's logging regular NHL playing time. 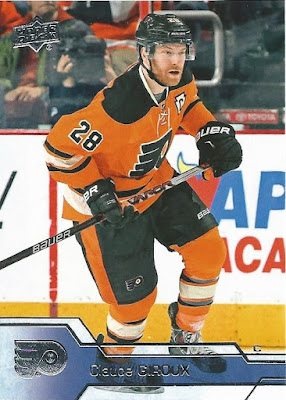 Pack 3 was somewhat of a dud.  I settled on this Claude Giroux because he's one of my favorite players, and because I love this Flyers sweater.  Maybe it was just my blaster but I feel like there were a lot of standard, tightly cropped photos like this and less of the creativity I've come to expect from Upper Deck. 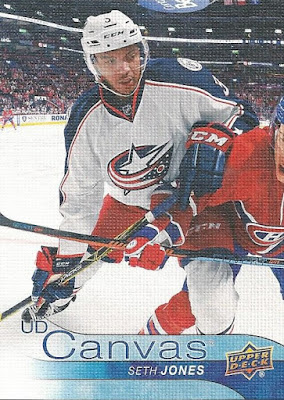 Pack 4 yielded my lone Canvas insert of the box.  I look forward to these every year and will gladly accept any that I don't have, so I was bound to be pleased with this one.  And I was.  I think the added color along the bottom really brightened these up, good decision by Upper Deck if you ask me. 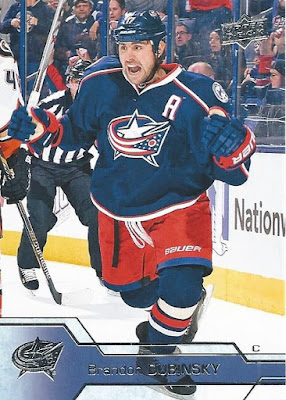 Back to back Blue Jackets cards?  Well, this Brandon Dubinsky was the best photo to spill out of pack 5.  I don't think many fans could possibly have predicted the year that Columbus is enjoying to this point.  They're just 1 point behind Pittsburgh for the top spot in the entire Eastern Conference, and have four games in hand on the Pens.  Crazy. 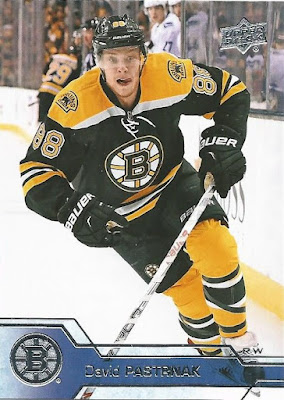 We hit the halfway mark of the blaster with David Pastrnak, who has really turned up his game for Boston this season.  Even after a recent slowdown, he's still got as many goals as any player in the NHL this season not named Crosby. 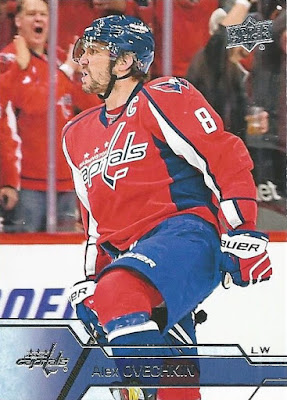 Alex Ovechkin quietly has 16 goals of his own this year.  You just know he's going to be close to 40 by season's end.  This nice celebration photo was my favorite card of pack 7. 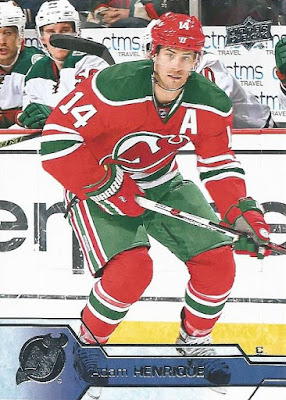 Pack 8 was nothing spectacular, but I do like this retro Devils sweater. 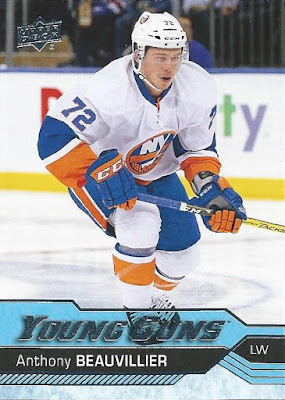 In pack 9 I found my other Young Guns rookie, Anthony Beauvillier of the Islanders.  Anthony is just 19 as well, and has 9 points in 25 games with New York this year.  I could have sworn you got three Young Guns rookies in a blaster, but I guess not.  Last year, Connor McDavid.  This year, Lawson Crouse and Anthony Beauvillier.  Can't win 'em all. 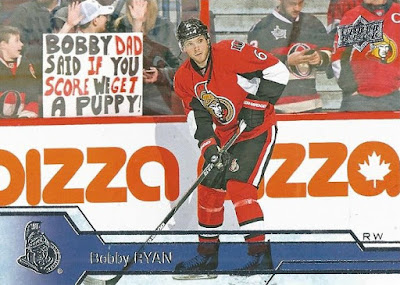 Pack 10 yielded the Bobby Ryan card that you've probably seen a hundred times by now.  It really is a great card, nice job by Upper Deck with this one. 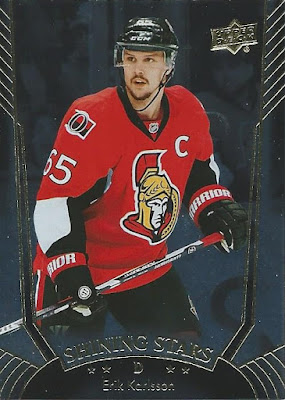 The inserts, as usual, didn't do it for me.  This Shining Stars Erik Karlson that slid out of pack 11 will probably be shipped out to a trade partner at some point, if there's anyone out there that even wants it. 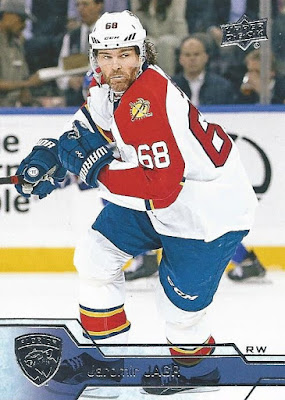 The last pack of the blaster provided me with a new Jaromir Jagr card at least.  I never get tired of acquiring new cardboard featuring the man who is now the second leading scorer in league history.  For me, a nice ending to an otherwise dull blaster.

So yeah, two less than exciting Young Guns and a pile of cards that are already nickel box fodder.  Until next year Upper Deck!
Posted by shoeboxlegends at 9:54 AM

I pulled my Matthews YG from a blaster. Still looking for the karma for the McDavid.

Those old Devils uniforms were great. Not being from Canada, I had no idea that Little Caesers there have the maple leaf placed in the letter "a". Nice touch.

Nice cards! I'd buy some Upper Deck hockey myself, but it's gotten to the point where I can't find hockey cards in my neck of the woods. Guess I was the only one buying them.

If it makes you feel any better, you were never going to pull a Laine from that blaster as he's in Series 2 haha.

Thanks Greg, yeah I realized it's only his Canvas YG card that's included in Series 1. Not sure if that makes me feel any better though! ;)

You're suppose to get 3 Young Guns in those blasters - looks like you were shafted.