Getting Back on the Horse with a Very Red PWE

Aside from my buyback franken-set project, I've been in a bit of a funk when it comes to collecting the past couple of months. On top of that, I haven't had much time for scanning in cards with the busy holiday season upon us.  This combination has left me woefully behind in thanking folks who have sent me cards recently. 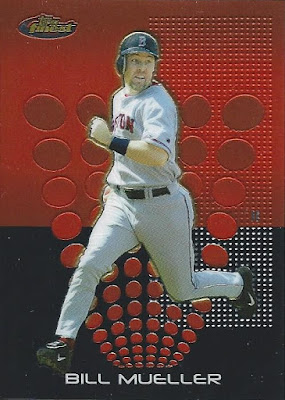 Today I begin to get back on track with a very red PWE from my good buddy Mark Kaz.  We've been enhancing each others' team collections nine cards at a time for at least a couple of years now, maybe more. 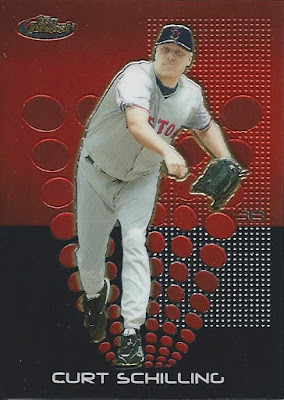 These red beauties are from the 2004 Topps Finest set, which I don't believe I've ever laid eyes on before.  Topps did a great job matching the background color to the team colors in this release.  Finest sets are hit or miss for me, this is one I'd consider a hit. 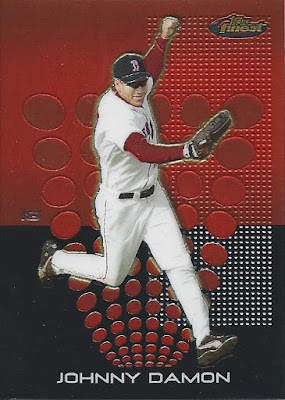 These are even cooler given that the 2004 team will go down in history as the club that broke the curse and brought a long-awaited World Series championship to the city of Boston. 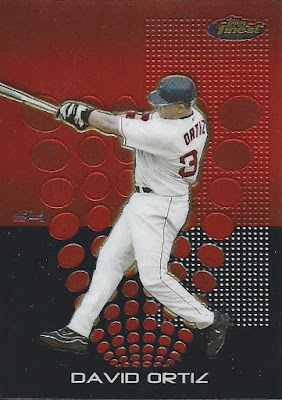 Here's the last of the '04 Finest quartet that I received.  It's gonna be strange watching the team play without Ortiz in the lineup next spring. 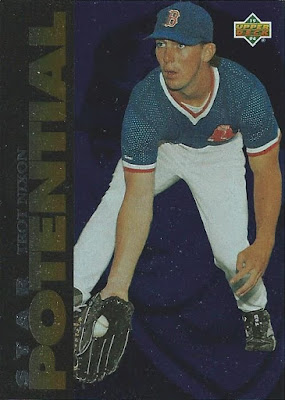 Mark shot me a new Trot Nixon card this time around as well.  This one is from the 1994 Upper Deck Minor League set, specifically the Star Potential subset.  I'm not sure Trot turned out to be a "star", but he certainly played the game the right way and is a fan favorite to this day in Boston. 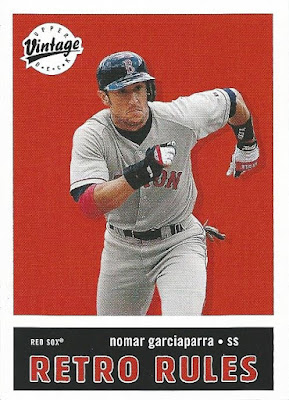 Here's the other card that gave this PWE its very red feel.  I wasn't collecting around the time when the Upper Deck Vintage sets came out, but if I had been these would have been right up my alley.  There's something about the solid-color background on this Retro Rules insert that's very 1958 Topps-ish. 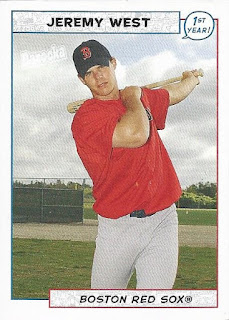 From 2005 Topps Bazooka, a mini of first baseman Jeremy West.  Jeremy fizzled out in AA and never made the big league club. 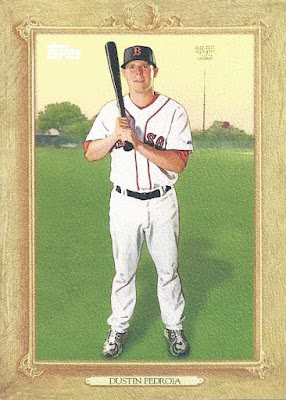 When I first got back into collecting around a decade ago, I picked up a decent amount of Turkey Red when it was its own release.  Looking back on it now, they're not my favorite cards as some of the "paintings" are a little odd.  I think Topps did a much better job with the Turkey Red inserts from the 2010 flagship set though, like this Dustin Pedroia here.  Awesome card! 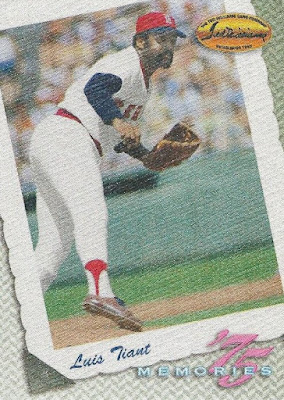 Finally, my favorite card from this delivery, a Memories insert of Luis Tiant from the 1994 Ted Williams set.  Until I received this package I had no idea this insert set existed, but what a great card.  These have a lenticular feel to them, almost like '70s Kelloggs cards sans the 3D effect.

Mark, thanks again for this great batch of Sox, and for motivating me to get caught up here.  I plan to get a return PWE ready this weekend to be sent your way next week!
Posted by shoeboxlegends at 11:50 AM

As always, my pleasure, good buddy! I'm also a fan of that year of Finest. For some reason, I've found them tough to come by at shows, etc. Anyhow, glad you enjoyed!

Those Finest cards at the time are sweet. Love the red backgrounds.

I don't think I've seen most of those cards, definitely not the 04 Finest. The red background goes great with the Sox - I'm always on the lookout for color matching cards. The Pedroia and Tiant cards are very cool, too.