When Connor McDavid is the Second Best Card... 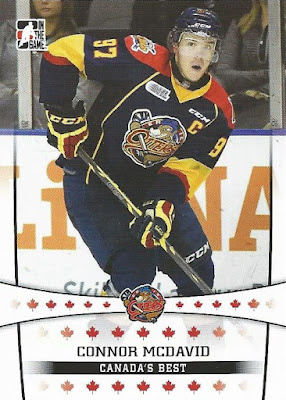 I recently received this Connor McDavid card from my good friend Dave H, who writes over at Wax Stain Rookie.  It was one of the centerpieces to a very thoughtful and much appreciated holiday care package.  I don't recall having seen this one previously, but it's from the 2014-15 Leaf In the Game CHL Top Prospects Canada's Best set.  Quite a mouthful.

Normally, a card of the hottest name in hockey (who just so happens to be pacing the NHL in points at the time of this post) would be the highlight of any trade package.  There was one card that topped even this one however.  Before we get to that let's take a look at a few other goodies Dave sent along... 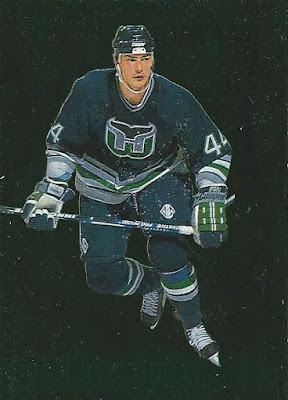 A new contribution to my ever-growing Hartford Whalers collection in the form of this Parkhurst International "Emerald Ice" Gerald Diduck card.  Diduck played two unremarkable seasons with the Whalers towards the end of the team's existence, with the team missing the playoffs during both years.  A cool parallel regardless, and I've never met a Whalers card I didn't like. 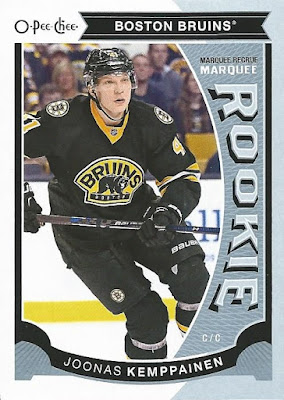 Here's a nice OPC Update card of a guy who was a flash in the pan for Boston.  After less than a year in the United States, Joonas signed a contract to play over in the KHL.  I'm always fascinated by cards of guys who were short term stops with a franchise, so this rookie card is a nice addition to my collection. 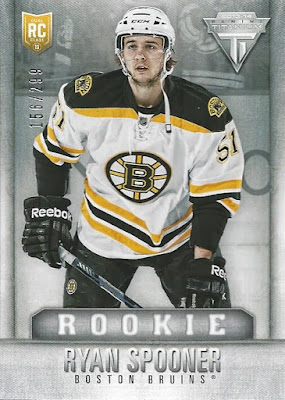 Speaking of nice rookie cards, here's a Ryan Spooner from 2013-14 Titanium.  Spooner is still with the Bruins, and has been the subject of some trade rumors this season.  I'm not sure how much the Bruins would get in return, but maybe some team out there thinks he could bloom in a more offensively-minded system.  Either way, a cool card here numbered to /299. 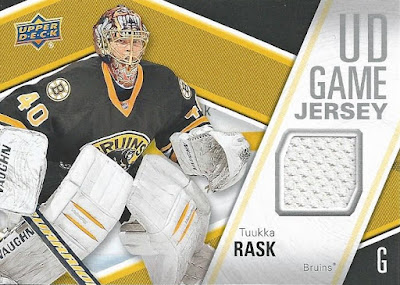 Dave seems to have an endless supply of hockey relic cards, and I got a nice pair in this package.  First up is Tuukka Rask, who's been very solid between the pipes so far in 2016-17.  He's one of a half dozen goalies in the league with a sub-2.00 GAA so far this year. 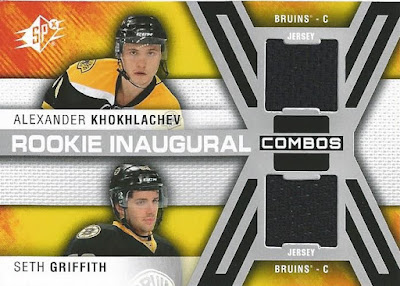 The other relic is from 2014-15 SPx, and features swatches of a couple of young centers.

Alexander Khochlachev is playing over in the KHL these days.  Seth Griffith was a 2012 draft pick of the Bruins.  He showed some good potential in his limited NHL playing time, and was a big scorer at the AHL level (second in points in the AHL last year).  He was claimed off of waivers by the Leafs earlier this year, then after appearing in just a few games was again scraped off of waivers by the Panthers.  He's recorded three assists in his last five games with Florida, so maybe he's found a home at last.  He's still just 23 years old, and clearly has the offensive skills to make it in the NHL, so I'll be watching his career unfold with interest.

And now, for the card that really blew me away...behold! 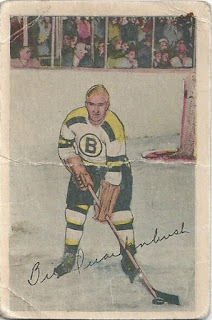 This beauty is just my second card from the 1952-53 Parkhurst set, featuring defenseman Bill Quackenbush.  I'm humbled that Dave would think to ship me such an awesome piece of cardboard, especially since this is now the second time he's bestowed a '50s Parkhurst card upon me!  These cards are just so interesting to hold in hand, their smaller size reminds me a lot of the '50s Bowman baseball releases.

I'm astounded that Dave was kind enough to send this my way, because Quackenbush was no slouch.  Known as a very nice guy, Bill was actually the first NHL defenseman to win the Lady Byng Trophy (awarded for sportsmanship and gentlemanly conduct).  Bill's 14-year NHL career was impressive enough that it landed him a spot in the Hockey HOF! 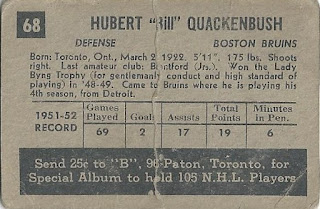 It's not every day that you get a card from the '50s featuring a HOFer in the mail by complete surprise!  Dave, you are far too kind, thank you very much for the great batch of cards.  Once we get past the holidays here I hope to find something to send in return that will hopefully bring you half as much joy as this package brought me!
Posted by shoeboxlegends at 11:01 AM

That Quackenbush is incredible!

Great stuff! Any day you get surprise vintage in the mail is a good day.

Wow. Nice mail day there. Quackenbush is over the top.

I am so pleased they made it there and were well received. It was entirely my pleasure and when I found that lot of 52-53 Parkies at the LCS with a spare Quackenbush, I knew you were the perfect person to receive and appreciate it! Merry Christmas Shane!