Today we return to my buyback franken-set project.  I've got so many of these still to process that I'd love to get another ten cleared off the desk here.  Today's post culminates in probably the hardest card I've had to reject from the set thus far.  Before we get to that though, let's evaluate the other nine... 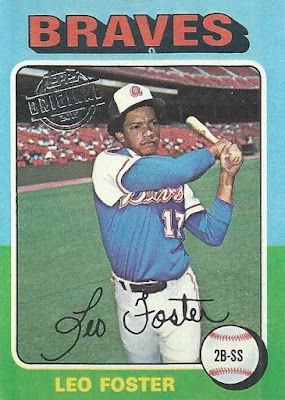 A nice '75 Topps card out of the gate, and one that makes the cut without contest in slot 418.  Don't have a whole lot to say about Leo though, whose 5-year MLB career added up to less than a full season's worth of games.  Let's keep moving... 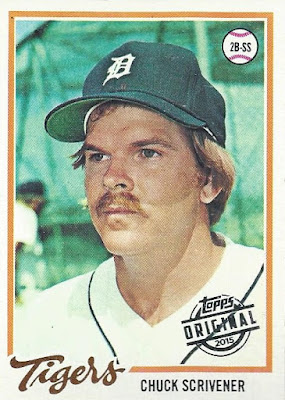 Chuck Scrivener's entire MLB career came between the years of 1975 and 1977 with the Tigers.  He's pictured on a '78 Topps card here, but never played in an MLB game in '78, or in any year after.  Unlike Leo Foster above, he's got some competition for the franken-set as well... 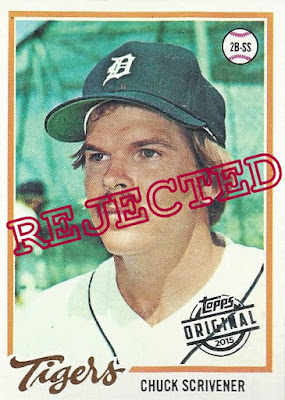 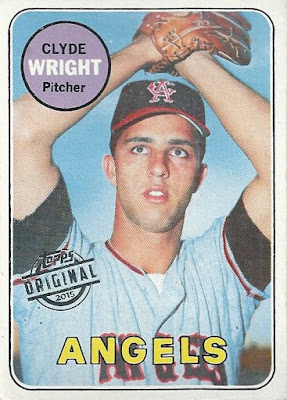 Next up, hurler Clyde Wright, whose 1970 Topps card is already in the set.  That one is much more significant given the impressive season that Wright enjoyed in 1970, including a no-hitter.  I figured this card would be an automatic inclusion anyway with a number as high as 583, but it turns out I've already got one of those in the binder: 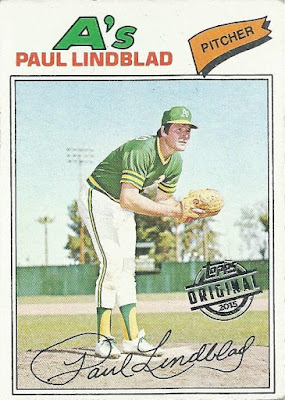 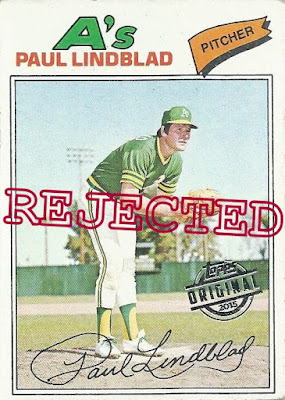 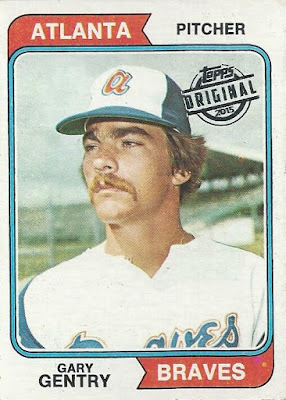 Next up is a late-career card of Gary Gentry, who most fans probably associate more as a starting pitcher for the 1969 "Miracle Mets" during his rookie season.  This particular card isn't anything too special in my eyes, and unfortunately it has a pretty rough match-up when it comes to the franken-set in the form of one of the older buybacks in the binder to date: 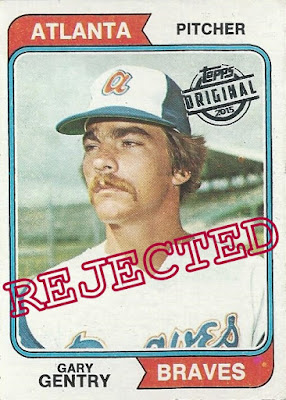 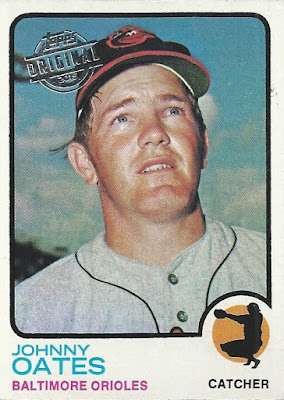 Johnny Oates carved out an 11-year big league career, despite being more known for his fielding prowess than for his ability to swing the bat.  He's better known for his time as a manager with the Orioles and Rangers, and was at the helm when Texas achieved its first ever playoff berth.  This card is blocked though from sliding into the lower right corner of the first page of the franken-set... 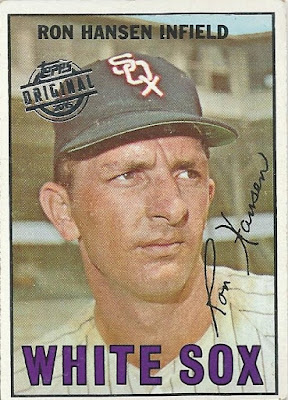 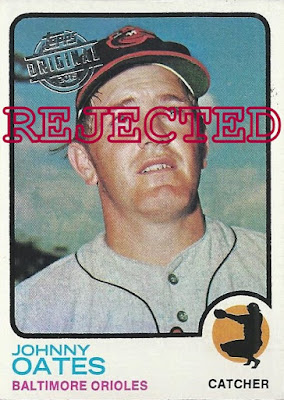 I guess I just enjoy the '67 set too much, poor Johnny! 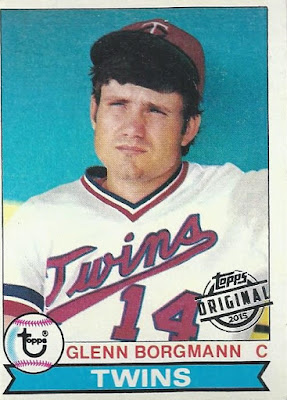 Glenn Borgmann's '75 Topps card was already bounced from the franken-set (and will be shipped to Greg at Night Owl Cards at some point in the near future).  Will his '79 card fare any better?  It's not looking good, as I already have a much more interesting card in slot 431:

There's just no way I could give this awesome, dusty catcher card the boot in favor of Glenn. 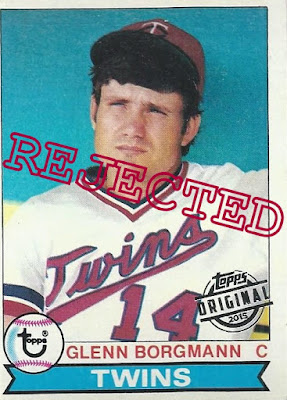 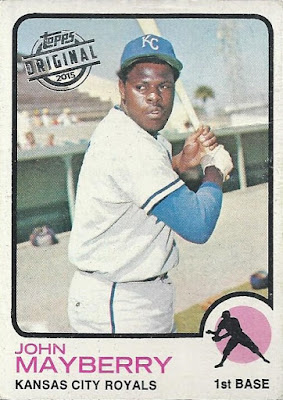 Another '73 up next here.  Looks like a photograph taken at a half-empty Spring Training facility.  1973 was really John Mayberry's second full MLB season, and he topped the 25 HR/100 RBI mark for the second consecutive year.  While he put up some good power numbers, he also displayed a pretty impressive batter's eye, leading the league with 122 walks and a .417 OBP.  He was selected as an All-Star for the first time in his career, and even earned some MVP votes.  He has a card blocking his path as well though... 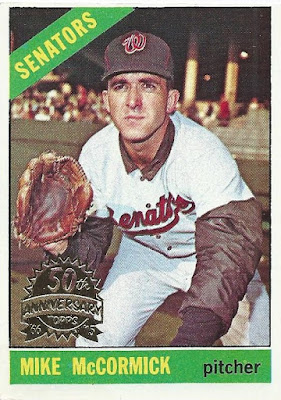 Love this Heritage buyback of Sens pitcher Mike McCormick.  Plus it was sent to me by my collecting buddy Joe Shlabotnik. 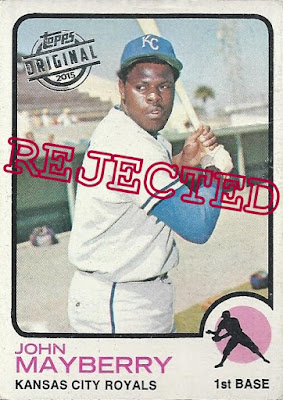 I decided to keep the McCormick when I prepped up this post, but after reading more into John Mayberry's career I'm second guessing this one to say the least.  I think when I get a little more caught up I might do one "reflection" post where I revisit a couple of the choices I've made to date.  When that time comes, this John Mayberry will be at the top of that list. 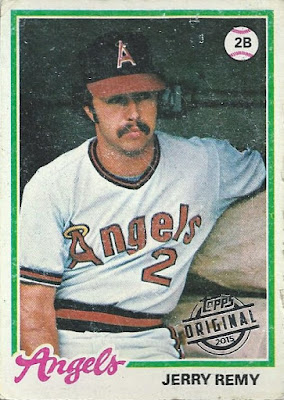 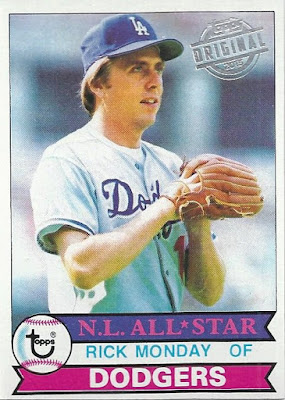 Rick Monday's 1979 Topps release makes the binder by default as well, which isn't surprising with a card number as high as 605.  I believe this is the first '79 Topps buyback I've landed that features the additional All-Star banner. 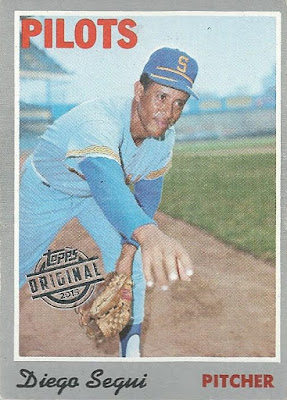 Finally, as teased at the outset of the post, the most painful card from this lot.  Like so many baseball fans, I'm fascinated by the Pilots, and I think this 1970 Topps Diego Segui would probably rank within my top 30 favorite buybacks, period, at this point in time.  I really, really, really wanted to include this one in my set, but there's a big conflict here to be settled as I current have this card in slot 2: 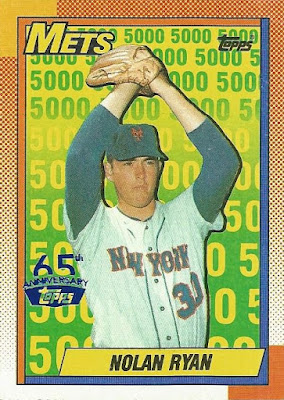 I know I'm in the absolute minority here, but I adore 1990 Topps as it was the first baseball card set I collected heavily as a kid.  I sought this buyback out specifically towards the beginning of this project.  It's so full of childhood memories and nostalgia for me that I simply can't oust it from the franken-set, at least not at this point.  So... 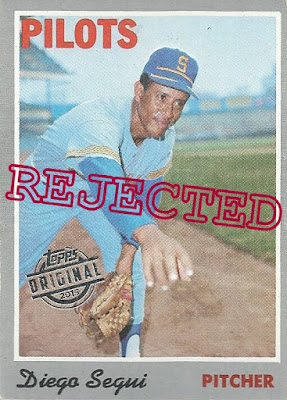 ...Diego comes out on the losing end of this one.  Of the close to 50 buybacks that are in the rejected box I'd have to say this one hurts the most.  Maybe I'll re-evaluate this match-up some day as well.  Hell, maybe at some point I'll get really crazy and start up a second "B-team" franken-set.  If that day ever comes Segui will have a spot, without question.

A lot of conflicts in today's post, so the set completion only got bumped up by 3 cards.  I'm sitting at a tidy 220 cards in the binder now...

A painful rejection indeed, but an understandable one. As fascinating as the Pilots are, it's hard to beat good, old fashioned nostalgia.

Why do they stamp buybacks right over the name like that '64 rookies? It seems like the stamps can only go in one of four quadrants, but on some cards, it is in slightly different places. So why can't they stamp it right in the middle so it doesn't cover up the name? I have one that has the rookie cup trophy covered by the stamp.

GCA, I've wondered this myself! You want to see the worst example I've seen so far? Check this out!

I'm glad Moses made the cut

Hope my batch has no bumps!!!

Tough call, but you made the right choice keeping the Nolan Ryan in slot #2. And the blue stamped buybacks are rare, yes?

I don't suppose you need a buyback for #81, do you? I saw one on COMC dirt cheap and couldnt pass it up. Can hold it for you if you need it.