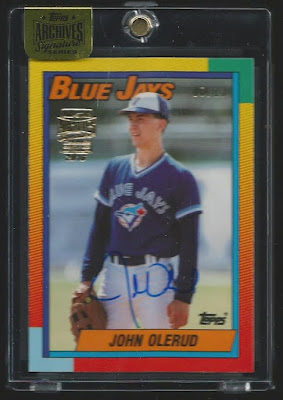 Why did I bother picking this one up?  Well, as I've said probably a hundred times now over the course of writing this blog, I'm all about 1990 Topps.  This John Olerud auto is from the traded set, but that's fine with me.  I was always a big fan of Olerud's, I think largely due to the fact that I was at a very impressionable age during his monster 1993 season.

As the lone bidder at less than $10 I was happy to scoop this card up, especially because there are only 13 copies in existence.  Another satisfying, cheap autograph courtesy of Archives Signature Series.  The signature doesn't show all too well against the dark Blue Jays jersey, and I've already got a couple of Olured cards I like better than this one.  I'm still pleased with it given the low cost combined with the relative scarcity. 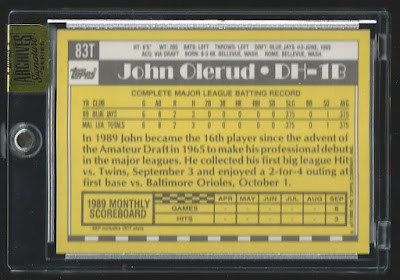 On a side not, now that I have a handful of these Archives autographs, I'm considering busting them from their holders and including them for evaluation in my buyback franken-set.  Not this one in particular since it's a traded card, but maybe some of the others.  After all, they are buybacks of original cards just like the rest of the franken-set, and why should I hold the fact that they're autographed against them?  If anything I think they might make the set even more interesting...

What do you think?
Posted by shoeboxlegends at 5:13 PM

I'm in the camp of those who would leave them in the holder, but I can understand the desire to bust them out for storage purposes.

I have a couple copies of that non-archived/signed..

Beautiful card. I'm honestly not a huge fan of the 1990 Topps design, but the more I see them signed (for Archives), the more I like it. As for setting the Olerud free... if I know I'm going to hold onto the card forever, I free it. I recently picked up the 1990 Topps Biggio auto and released it from its plastic cell. On the other hand, most of the other Archives I have picked up, I kept intact... just in case I eventually pass them on to others.

GREAT buy, Shane! That's one of my favorite Topps cards of all-time!