It's been many months since I previewed a new card towards my slow burn set build of 1950 Bowman, having last shown Jim Hearn and the mystery man in a tie.  Today's example is one I've actually shown on the blog before, way back in 2011, but haven't officially previewed for this project. 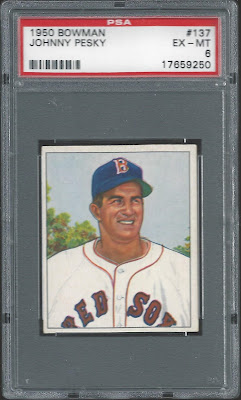 It's Red Sox fan favorite, Johnny Pesky!  It's easy to see why Pesky was so beloved in Boston that he's got a foul pole in Fenway Park named after him.  An under-rated player and a class act of a human being for sure.  While I haven't made it a point to add to it in recent years, there was a time when I was building a small collection of his playing-era cards.

I tend to forget just how effectively Johnny swung the bat early in his career.  Check out these stats courtesy of Baseball Reference:

The man led the American League in hits in 1942, 1946 and 1947.  It's interesting to think about how things might have differed had Pesky not given up three seasons to serve his country in the military.  Could he have led the league in hits during his age 24, 25 and 26 seasons as well?  We'll never know, but if he had, he'd have been the only player in league history - to this very day - to do so.  The closest anyone's come to that mark are Jose Altuve, who led the league in hits for four consecutive seasons (2014-2017), or the great Ichiro Suzuki, who did it for five years running (2006-2010). 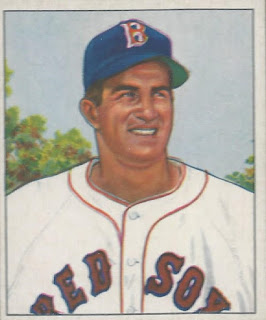 Here's a better look at the card, though a bit fuzzy due to the plastic slab messing up the scan.  A little off-center, but a great-looking example, and one of my favorite Johnny Pesky cards. 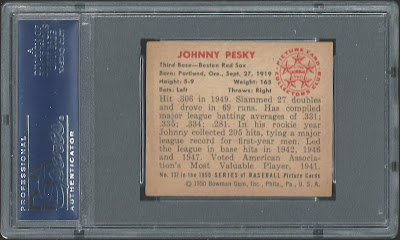 That's all for today, and I finally hit double digits on this project with ten cards profiled now.  I've already got the next two of these queued up in draft format, so I'll make sure I don't go nearly as long between posts this time.

Thanks for stopping by, and have a great week!

Beautiful card! Love those early 50's Bowmans. Always fun to speculate how a lot of these players careers would have turned out had they not served in the military during wartime.

I didn't realize Mr. Pesky had such a great batting record. Thanks for sharing that info!