One of my lifelong collecting goals is to someday complete a 1950 Bowman baseball set.  It's not exactly at the top of my priority list, but something I plan to slowly plod away at over the course of my lifetime.  Today I'm reviewing my ninth pick-up towards that pursuit... 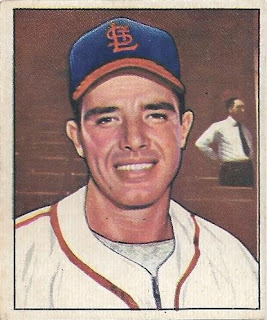 ...and it's tall left-handed pitcher Jim Hearn.  Jim played 13 seasons of Major League Baseball for the Cardinals, Giants and Phillies.  You don't hear much about him these days (at least I don't), but he seems to have been a somewhat under-rated player.  He won over 100 games in his career, many more than he lost, and finished with a respectable career ERA of 3.81.

This particular card is a favorite in my early set build here for a couple of reasons.  First and foremost, Hearn had one of his better seasons in 1950.  The Cardinals had placed him on waivers early in the season, but when the Giants claimed him in mid-July he was an absolute stud for the latter half of the season.  In 16 starts for New York, Jim went 11-3 with a 1.94 ERA  In 11 of those 16 starts he pitched a complete game, and 5 of those were shutouts to boot!  Jim's resurrection with the Giants was so impressive that he was even named on at least one MVP ballot that year.

The second reason I love this card though is obvious...the lurker in the shirt and tie.  It's just so bizarre and so out of place.  The interesting backgrounds are one of the things I enjoy most about this release, and this one certainly doesn't disappoint.  Is that Jim's agent, or accountant?  Maybe a Secret Service agent?  We'll never know, and in all likelihood it was just an average fan given that folks used to actually dress up to attend ballgames back then. 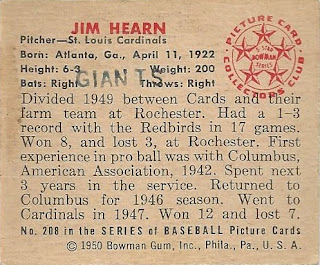 I got this card for $3, and I bet one of the reasons I picked it up so cheap is that some baseball fan almost 70 years ago took it upon himself to stamp "GIANTS" on the back.  I don't mind, in fact I kind of like it.  The reason Hearn was on waivers to begin with in 1950 was that he got off to a  horrific start with St. Louis, to the tune of a 10.00 ERA after 6 appearances.  All of his success that season came after the Giants claimed him, so it's a rare case where I think I actually prefer my stamped card to a clean one.

Whoever the man in the tie is, I'll bet this is his rookie card!

Put a random guy on the other side of Hearn's shoulder and you'd have that classic angel-devil thing going like in the movies.

That is a great card for that mystery man alone, but the 'Giants' stamp on the back gives it some provenance. Nice pickup for $3!