Fred Hutchinson was "really happy inside, only his face didn't know it" - Joe Garagiola 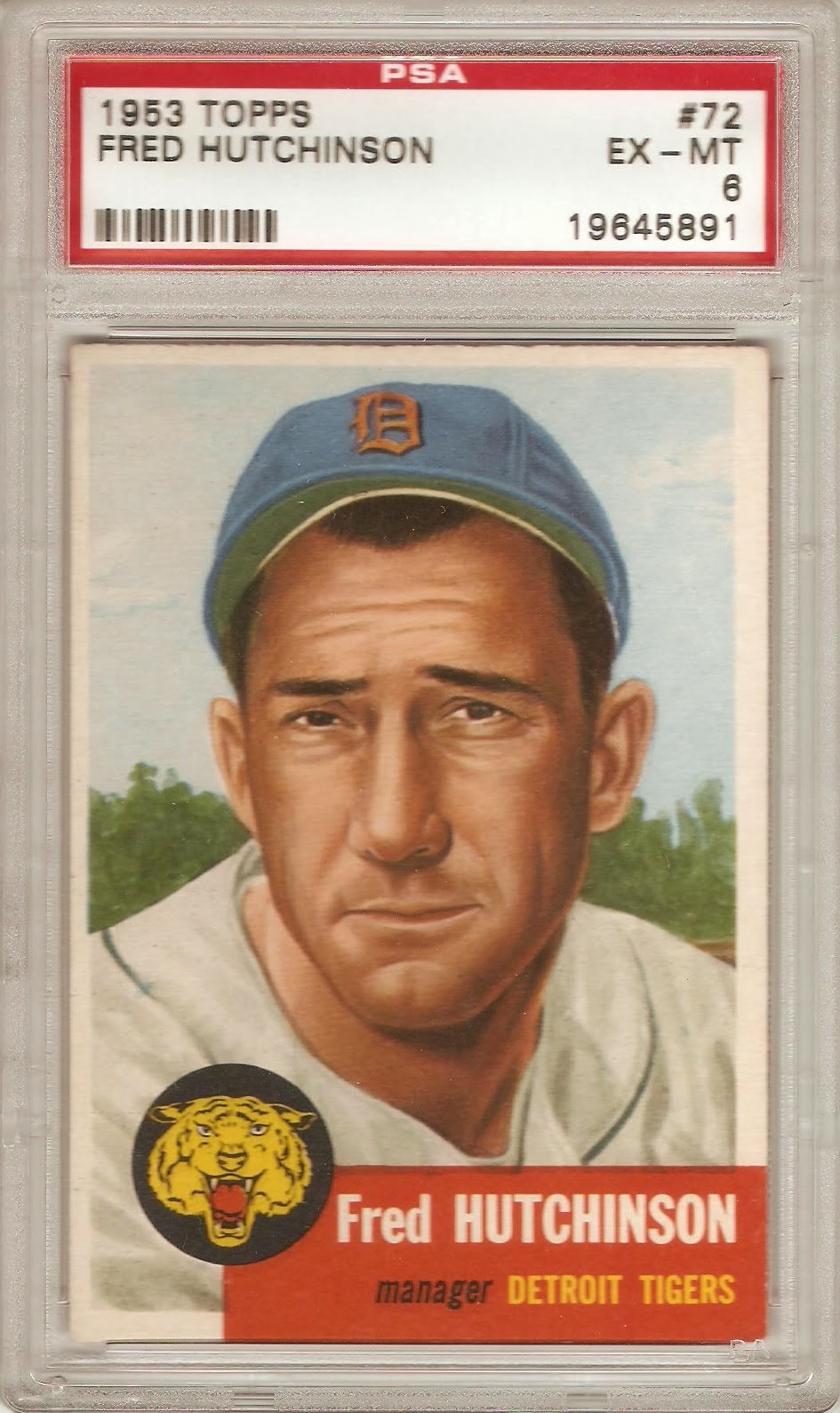 I think the quote above fits perfectly with the expression on this 1953 Topps card.  Fred was a starting pitcher who got off to a blazing start in minor league ball in the late 1930s.  He was first promoted to the big league Detroit Tigers in 1939 at age 19, but was less than successful in his first two seasons (combined 6-13 with an ERA well above 5.00) and was sent back to the minors both years.  At that point, like so many players of his generation, he spent some time away from the game serving his country in World War II.  Hutchinson missed four seasons ('42 through '45) while serving in the Navy, and rose to the rank of lieutenant commander during that time.

Fred returned to the game at age 27 with renewed vigor, and went on to enjoy some successful years.  He won at least 10 games for 6 years straight between 1946 and 1951, and only once in that stretch did his ERA creep above 4.00.  Hutchinson even garnered some MVP votes in 1947, and was named an All-Star in 1951. 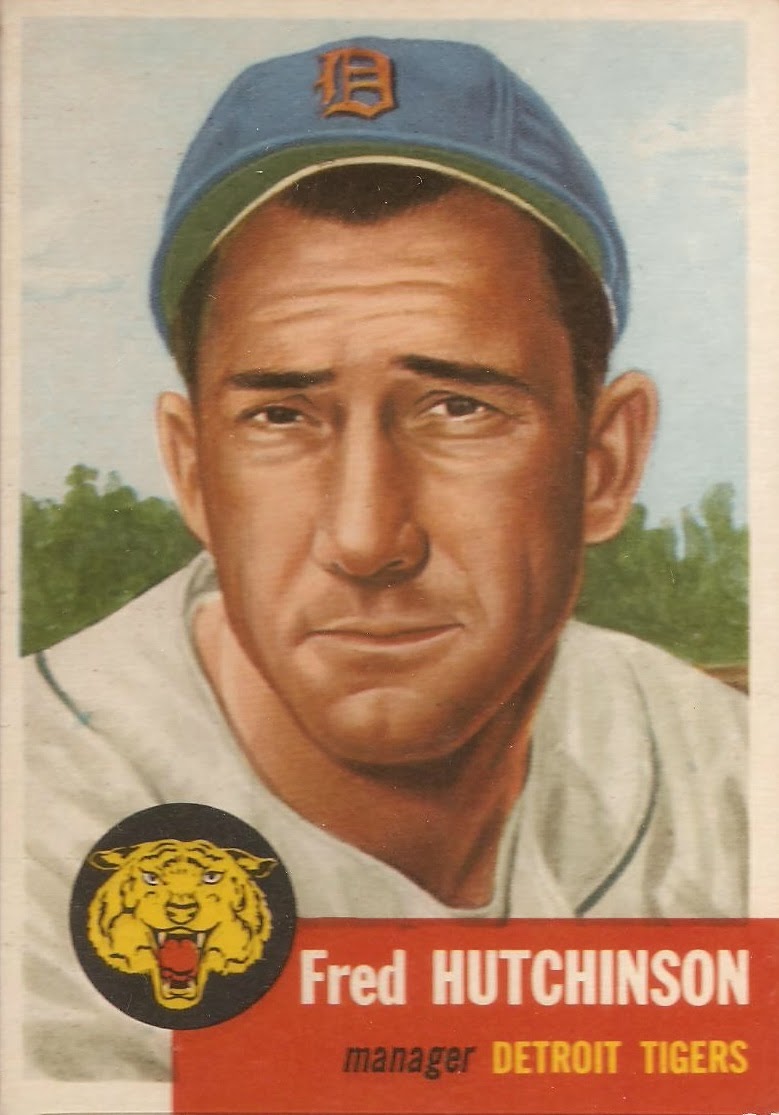 As Fred's playing career began to wind down the Tigers, realizing his great leadership potential, decided to transition him to manager.  In the middle of the 1952 season Detroit fired their manager and supplanted him with Hutchinson, though he was still an active player on the roster.  He returned as player/manager for the '53 season, which is why you see the 'manager' designation on this card.

Hutch, as he was affectionately called, would go on to manage a few years with Detroit, and also spend some time behind the bench at St. Louis.  He really found his managerial success though when he landed with the lowly Cincinnati Reds in 1959.  By '61 he had won the NL pennant and turned them into World Series contenders, but unfortunately they ran into the buzz saw that was the '61 Yankees in the Fall Classic that year.  Fred was in as manager of the Reds after that season though and would stay with the team for a couple more years. 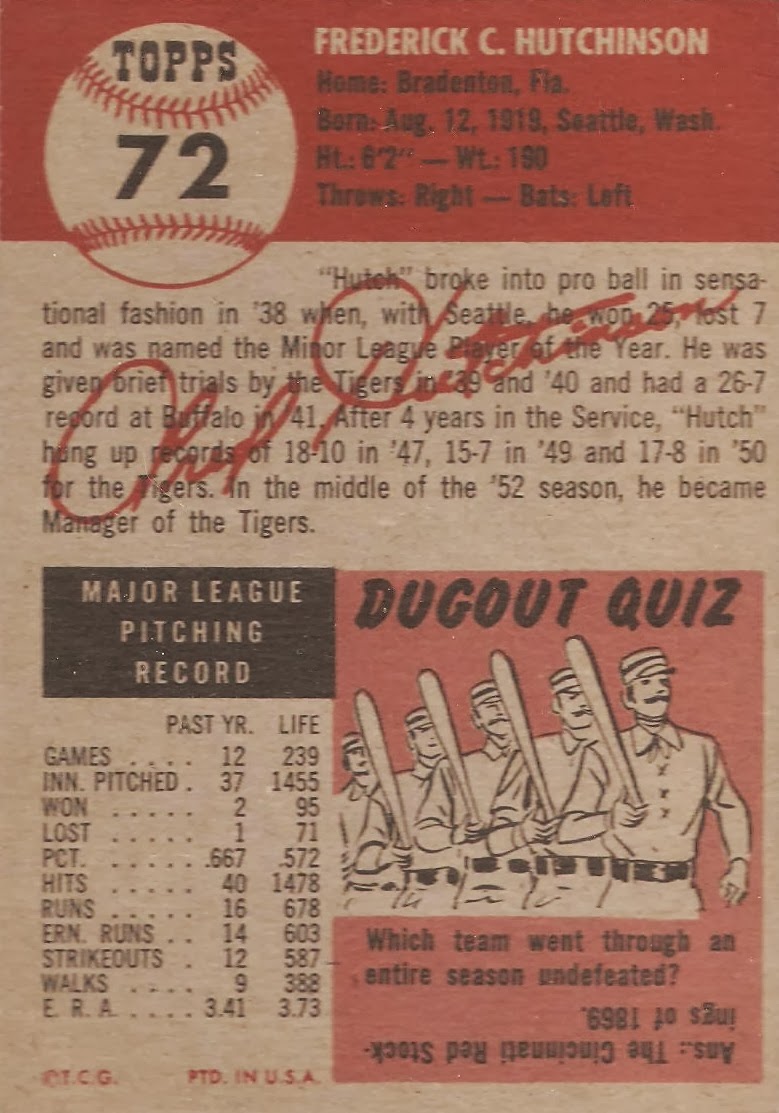 Tragically, in the off-season before 1964 it was revealed in a medical examination that Hutch had some tumors in multiple places, including his lungs.  The prognosis was grim, but Fred made an awe-inspiring effort to manage the club despite his illness.  He made it all the way to the end of July before he had to be hospitalized.  He made another brief return in August but had to turn over the team after just a few days.  Sadly, Fred would pass away in November of that year from the disease.  He was just 45 years old.

There is some silver lining to Hutchinson's story though, as his brother founded the Fred Hutchinson Cancer Research Center in Seattle the year after his death.  They're generally regarded as one of the top cancer research facilities in the world, and have helped an untold number of people deal with this terrible illness in the decades since Fred's death.  In addition, MLB presents the Hutch Award anually in Fred's name.