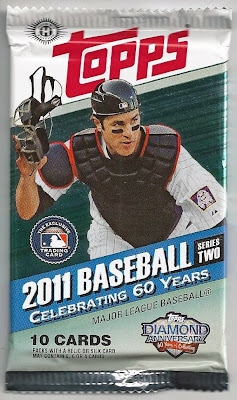 Here's the fourth of five packs I received as a gift this past holiday season.  I've had pretty good luck with the first three, resulting in some good trade bait, some set needs, and even a couple brand new Red Sox cards.  Today I'm opening a 10-card hobby pack of 2011 Topps Series 2.  I do have about 50% of the Series 2 set already, so I'm interested to see how I do in terms of set needs.  Knowing how Topps' collation can be I have a feeling I'll be getting either all dupes or all cards I needed... 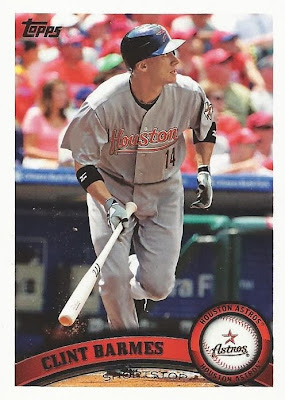 Interesting start to the pack, in that I pulled Clint's base card from my 2010 Topps pack as well, which also shows him running out of the batter's box... 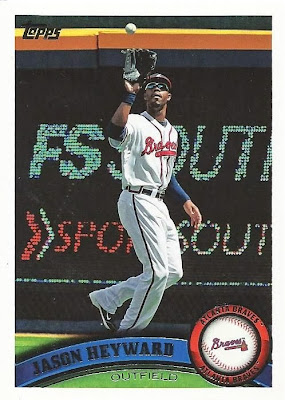 A little bit of star power with Jason Heyward, who missed close to 60 games due to injury this past season.  Will be interesting to see what kind of numbers he can put up if he stays healthy in 2014... 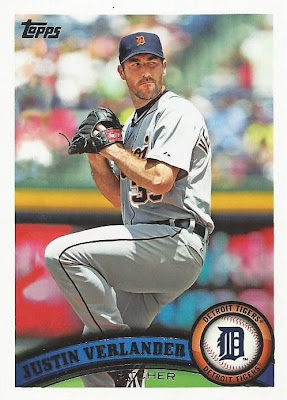 Justin Verlander, giving the ol' stink eye.  If the Tigers could have produced any kind of run support for Justin this past post-season they might have found themselves World Series Champions. 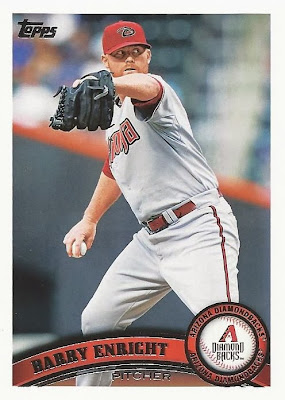 I admit that I've never heard of Barry Enright, and after looking up his stats I can see why.  He was dealt to the Angels in 2012, made just 7 total appearances with them over 2012 and 2013 to the tune of a 13.50 ERA, and is now a free agent.  The good news is that I needed this card for my set, along with the first three! 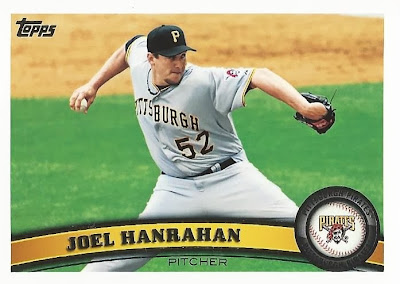 I don't mean to sound insensitive, but thank God this guy got hurt after just 9 appearances for Boston in 2013, or else maybe Koji Uehara never would have gotten a shot at the closer role.  He's currently a free agent, and considering what kind of heat he had, at least before his injury, I'm sure someone will give him a shot this coming season. 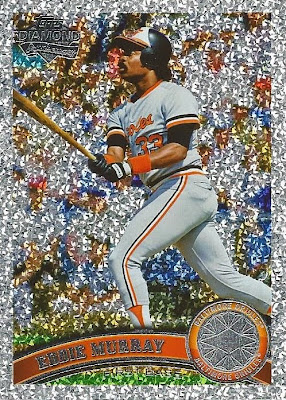 Pure awesomeness.  This Diamond Anniversary parallel of the short-printed legends variation is just fantastic.  These are actually a decent pull from flagship Topps, the cheapest I can find this card on either eBay or COMC is $6.  Barring some miracle pull in my final pack, this will probably turn out to be the single best card from these gifted packs. 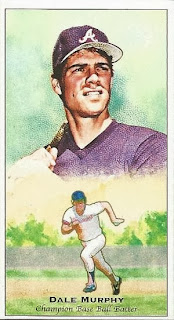 Don't care much for the Kimball Champions minis, so this one is off to my Zistle trade list. 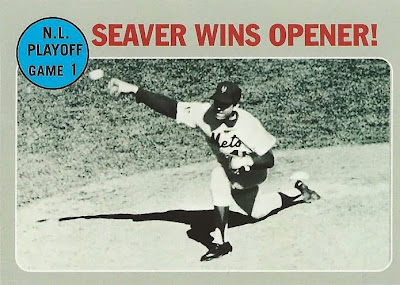 Same with this 60 Years of Topps reprint.  I'd love to own a copy of this '70 Topps card one day, but this reprint is going to my trade box. 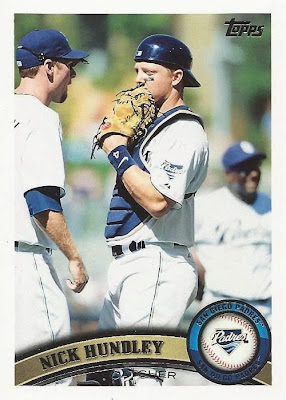 Hundley is still the primary backstop in San Diego, and he set career highs this past season in starts at catcher (102), at-bats, hits, doubles (19) and home runs (13). 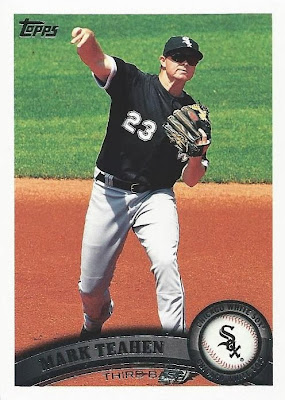 Teahen was traded to the Blue Jays in the summer of 2011, and after finishing out the season with Toronto mainly spotting as a defensive replacement or pitch hitter, was released by the team.  He's signed a few minor league contracts since, but has never cracked a big league roster and is now playing in the Atlantic League.

Well, that was a very solid pack.  I needed every one of the base cards, scored a killer Eddie Murray parallel, and even got a couple of inserts to use as trade bait.  I'll have another rip with my final gifted pack up sometime in the coming days...
Posted by shoeboxlegends at 9:38 AM

For a random pack that's not bad at all!

Thanks Hackenbush! Yeah, I was pleasantly surprised, was not expecting much out of that.