Here's the third of five packs I received as a Christmas gift a week ago, just got to cracking it this morning... 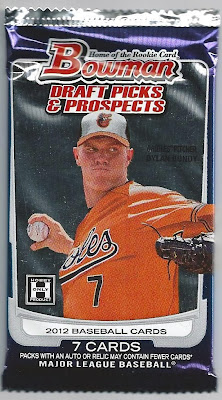 Today we're looking at 2012 Bowman Draft Picks & Prospects, which according to the wrapper was apparently a hobby-only release.  All these Bowman products generally confuse the hell out of me, and I'm often challenged even identifying what it is I'm holding half the time.  Let's see where these 7 prospects are at nearly two years after this set was released... 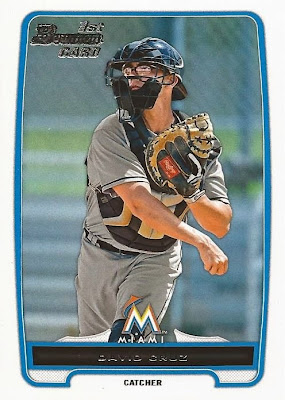 David Cruz appeared in just 13 games for the Gulf Coast League affiliate of the Miami Marlins in 2013, although he did swat 3 home runs and 8 RBI in those appearances. 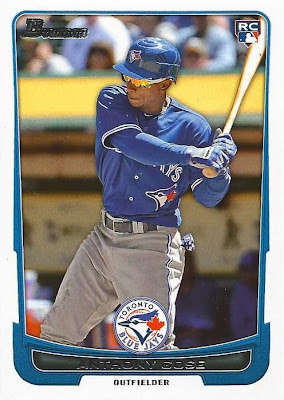 Gose is one of the top prospects in the Jays organization, and has been back and forth between AAA and the big league club the past couple of seasons.  I think we'll be seeing more of him in 2014, and I have a feeling I might be sending his rookie card here north of the border. 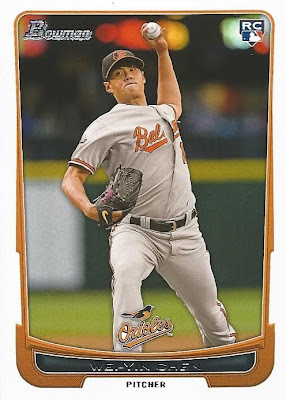 Wei-Yin Chen, who hails from Taiwan, has become a steady arm in the O's rotation over the last two seasons, although he did spend his first time on the disabled list in 2013. 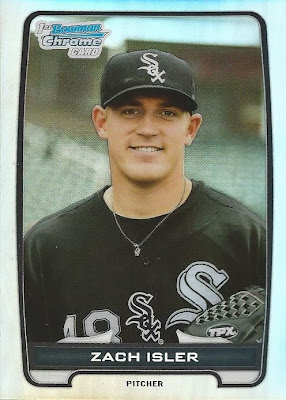 This one confused me but it's actually a Bowman Chrome Draft Picks & Prospects card inserted into a non-chrome pack.  And it's a refractor.  I don't think we'll be seeing Zach here in the pros given that he tossed to the tune of a 5.65 ERA at A ball this past season... 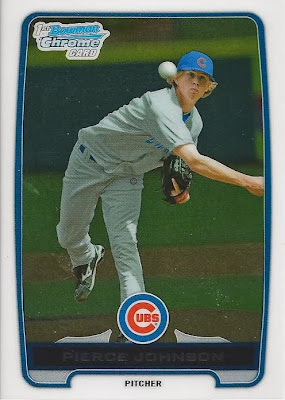 Another Chrome card, but not a refractor.  Pierce had good success in A ball last year, the kind of numbers that I would think would see him promoted to AA to start 2014.  He's actually listed as the number 6 overall prospect in the Cubs organization entering 2014, probably the brightest potential future of any prospect in this pack. 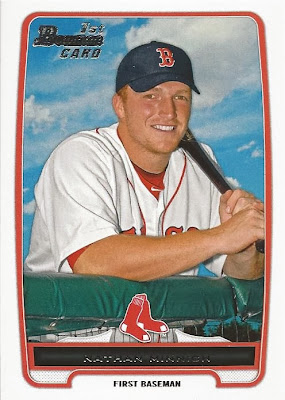 Awesome, a new Red Sox card!  That's the best thing I could hope for out of a pack like this.  Nathan spent last season with the single-A Lowell Spinners and will have to improve his numbers significantly this year if he expects a promotion to AA Portland. 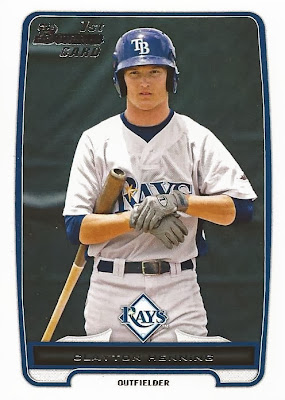 Clayton has been toiling in the Gulf Coast League the past two seasons, but is still very young at just 20 years old.  He's apparently 6'3" and was a two-sport star in high-school, doubling as a mean wide receiver.

That was an interesting look at a product I would never pick out myself, but that I have to say was fairly entertaining to open.  Researching these players was more fun than pulling my 15th Yankees insert of the year anyway.  Happy New Year!
Posted by shoeboxlegends at 9:14 AM