An Exchange with Fuji

Recently I completed my very first trade with Fuji, whom you all know from his great blog The Chronicles of Fuji.  I've been reading his blog for years, in fact he's even inspired some of my cardboard purchases, so I'm not sure what took us so long to get around to a trade, but I can definitely say it was worth the wait.

It all came together when I posted about the 1990-91 O-Pee-Chee Premier hockey set a few weeks ago.  I mentioned that I had a spare set available and Fuji expressed some interest, so I shipped the cards off to him.  I was happy just to purge 150+ unwanted cards from my hobby room and didn't ask for anything in return, but being the gentleman that he is I received a great bubble mailer just a few days later. 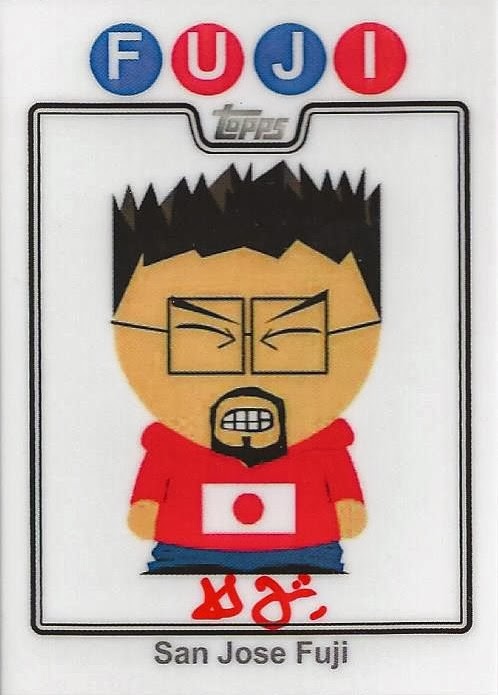 Included was one of the coolest custom cards I've ever seen someone create.  This card is a really well printed homage to 2008 Topps and truly looks professionally done.  Even the card stock is very high quality.  There were 5 Red Sox hits in the package to accompany this Fuji card... 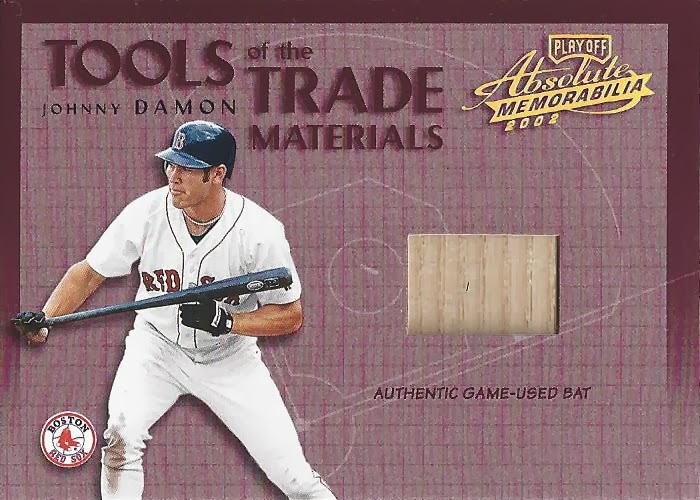 This 2002 Absolute Memorabilia Johnny Damon game-used bat kicks things off.  This is from an age in the hobby where relics were a much more significant pull, and is serial numbered to /250 on the reverse.  I love this card because Damon is very under-represented in my collection.  Of the close to 15,000 baseball cards I've scanned and cataloged so far, he appears on a total of 10, if you include this one, and this is my first hit.  I have a lot of fond memories of watching Damon make some big plays in person at Fenway Park. 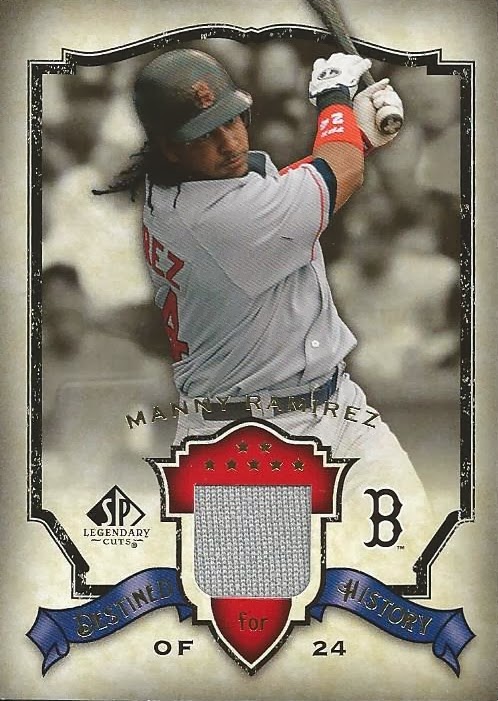 Talk about a fall from grace.  Manny was on top of the world in 2007, and his reputation has literally plummeted since.  Nowadays in Boston he's most remembered for his immature antics, failure to leg out ground balls, steroid use, and for pushing an elderly Red Sox employee to the ground.  After he left he got even worse.  This is a really nice looking card nonetheless, and the grey swatch really fits. 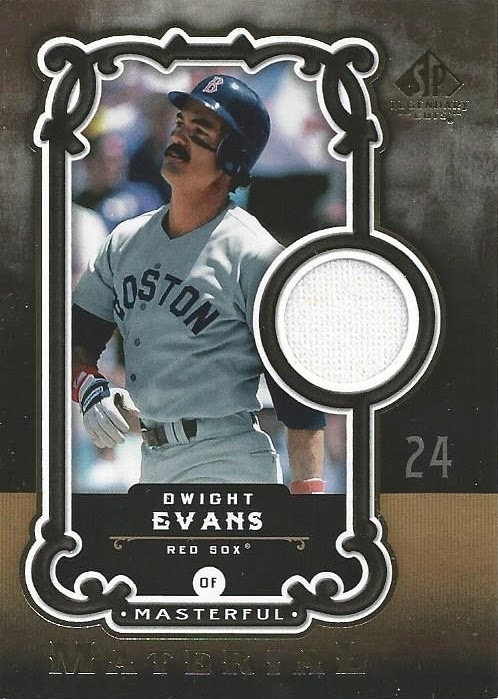 Here's a guy who's much easier to appreciate than Manny.  Dewey played his entire career in Boston except the final 101 games, time he spent with Baltimore in 1991.  3 All-Star appearances, 8 Gold Glove wins, 2 Silver Slugger awards, and twice in the '80s he led the AL in home runs.  Not too shabby!  This is actually my very first Dwight Evans relic as well. Closing out the game-used cards is the only guy still with the team, David Ortiz.  This is from the 2009 Upper Deck Icons set, which I don't have so much as a single other card from.  I now have over 120 unique Ortiz cards without really even trying.  He's just in so many sets, subsets and insert sets.  Only three of those cards are hits though, with this being the third. 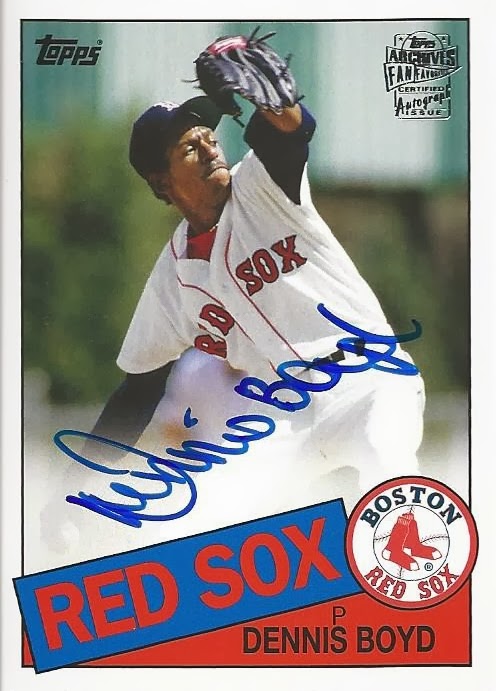 Finally, one of my favorite new baseball cards from last year, the Dennis "Oil Can" Boyd auto from Topps Archives.  Every Red Sox fan who collects should have a copy of this great card.  I know Fuji's already got one, as he completed this entire autograph set.  I've got one as well, having grabbed all four Red Sox autos over the course of last year.  As much as I'd like to keep this as a second (and get a third, fourth and fifth!), I think I am going to pay it forward and send this to another collector to enjoy rather than hoard it for myself.

Anyone interested?  Thanks for the awesome trade Fuji, your package was very much appreciated and definitely brightened up my week!
Posted by shoeboxlegends at 10:11 AM

If you have no Red Sox fan takers, I'll take it off your hands. I know someone who could use it.

Greg, I just got your PWE yesterday (you're my next trade post up) so your timing is perfect. It's yours! Will try to find a couple other cards to put with it and get it out this coming week...

Glad the package arrived safely. The custom card was actually created by a company that is licensed by Topps, hence the professional look. As soon as I run out of these... I'm planning on producing a second series with either a 1972 or 1975 design.

Thanks Mark! Fuji, can't wait to see the next one, we'll have to arrange a trade once you've got it printed up so I can see it in person.