I promise I'm going to start showing some autographs that aren't from this set soon, but with about a foot of snow on the ground, temperatures in the teens, and the NHL season in full swing, it just feels like the right time of year for more great hockey autos from Panini Classics Signatures... 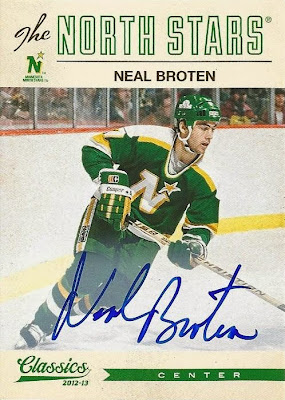 With Sochi just around the corner, it seemed like a fitting time to show Neal Broten's autograph, since he was a member of the 1980 'Miracle on Ice' US Olympic team.  He went on to enjoy a solid, 17-year NHL career that included a couple of All-Star appearances, a 105-point season, and scoring the Cup-clinching goal for the New Jersey Devils in 1995. 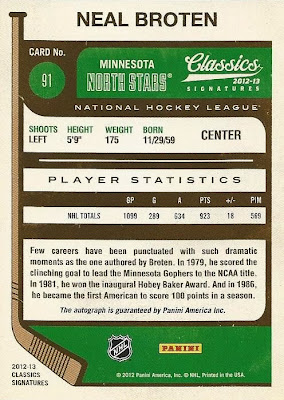 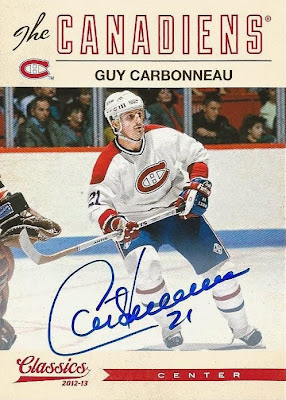 Guy Carbonneau was a very good defensive forward, and was key to the Canadiens' championships in 1986 and 1993, and even went on to win a third Cup with the Dallas Stars later in the '90s.  He won the Selke Trophy three times over a five-year stretch in the late '80s/early '90s, pretty damn impressive. 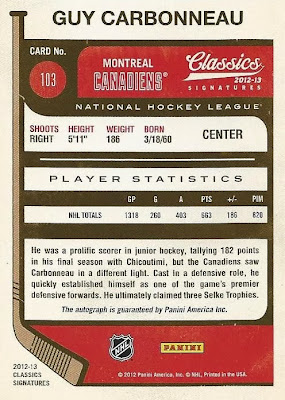 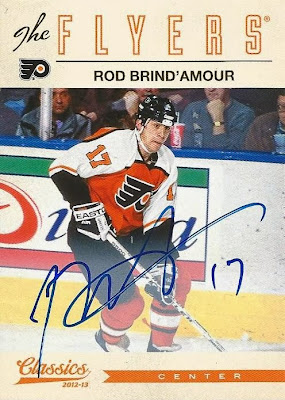 Speaking of the Selke Trophy, here's a guy who became known as one of the best shut-down centers in the game, and won the award back-to-back in 2006 and 2007 with the Hurricanes.  Rod also captured a Cup, as team captain with the Hurricanes in 2006.  While he may not be a Hall-of-Famer, 450+ goals scored and close to 1,200 career points isn't too shabby by any standard. 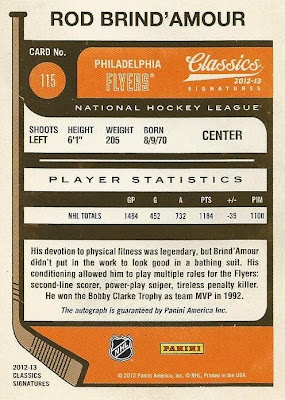 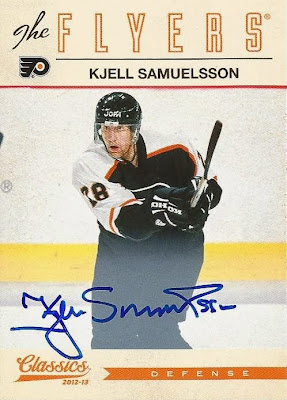 Kjell Samuelsson was drafted by the New York Rangers, but after playing just a scant 39 games with the club was dealt to the Flyers, where he'd enjoy the most successful years of his career.  Luckily for Kjell, he was traded to the powerhouse Pittsburgh Penguins in 1992 (the trade that brought Mark Recchi to Philadelphia) and won a Stanley Cup with that team just a few months later.  He'd end up back with the Flyers a few years later, and wrapped up his career with the Tampa Bay Lightning in 2008-09. 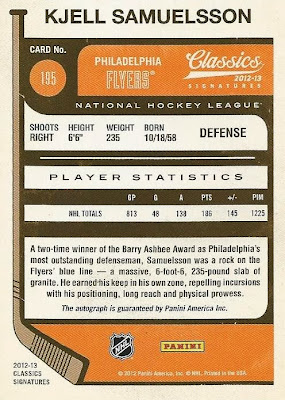 Finally, Rob Blake.  Rob played many years in Los Angeles, where he lost in the Cup finals in '93, became the 11th team captain (after Gretzky departed for St. Louis) and won a Norris Trophy.  He finally got to hoist the Cup in 2001 when, like Kjell Samuelsson, he was the beneficiary of a late-season trade that sent him to the Colorado Avalanche.  Blake is one of a small number of players who won Olympic gold, World Championship gold, and the Stanley Cup. 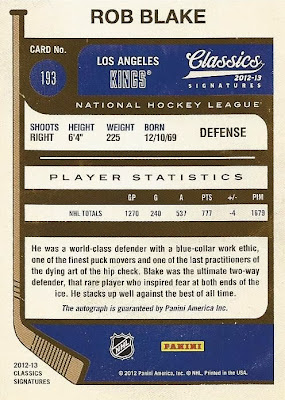 Well, that's a wrap.  I think it's great that five guys who lifted the greatest trophy in sports all held and signed these hockey cards.  This lot brings me to an even 80 autographs and counting from this set...
Posted by shoeboxlegends at 10:07 AM

That is hands down one of the best designed autograph sets I've seen in the past decade. Seeing you build the set almost makes me want to be a hockey collector.

Thanks Mark! There are actually a couple of Penguins on the checklist so definitely stay tuned!

I like the Guy Carbonneau autograph. The loops remind me of the top of a Hostess cupcake. mmmmm...cupcakes!

Very nice. The Broten and Carbonneau are my faves out of this round!