Vean Gregg and the Case of the PSA Mis-Grade

Late last year I sold off a whole bunch of cards I didn't want any longer on eBay, and used the funds I raised in that endeavor to purchase my very first vintage Cracker Jack card.  It was easily one of the top 3 coolest cards I landed all last year, and really made me want to pursue one or two more Red Sox cards from the set. 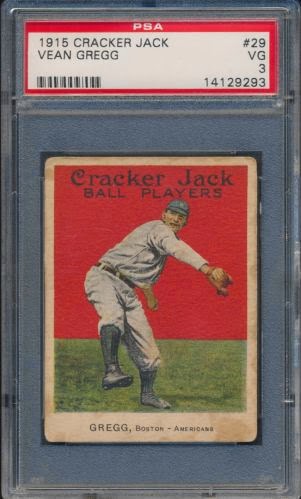 One card that I had my eye on for some time was this Vean Gregg, graded a VG-3 by PSA.  I don't care about the low grade, in fact I'd prefer it since I'm only buying authenticated to ensure I'm not ripped off on the 'Bay.  As far as condition goes, the worse the better (as long as it's halfway presentable) as it brings the cost right down and makes attainable a card that would otherwise be unreachable.  I thought a grade of 3 was fair for this card, since it's got well rounded corners and some staining, but very good overall visual appeal.

Unfortunately the seller wasn't willing to stray very far from his $195 asking price, which is unreasonably high in my opinion.  So, I added it to my watch list figuring maybe someday in the future he'd come to his senses.  I stayed on the lookout and as luck would have it I was able to land myself a copy for way less just a few weeks later.  As in just over half that price.  Take a look: 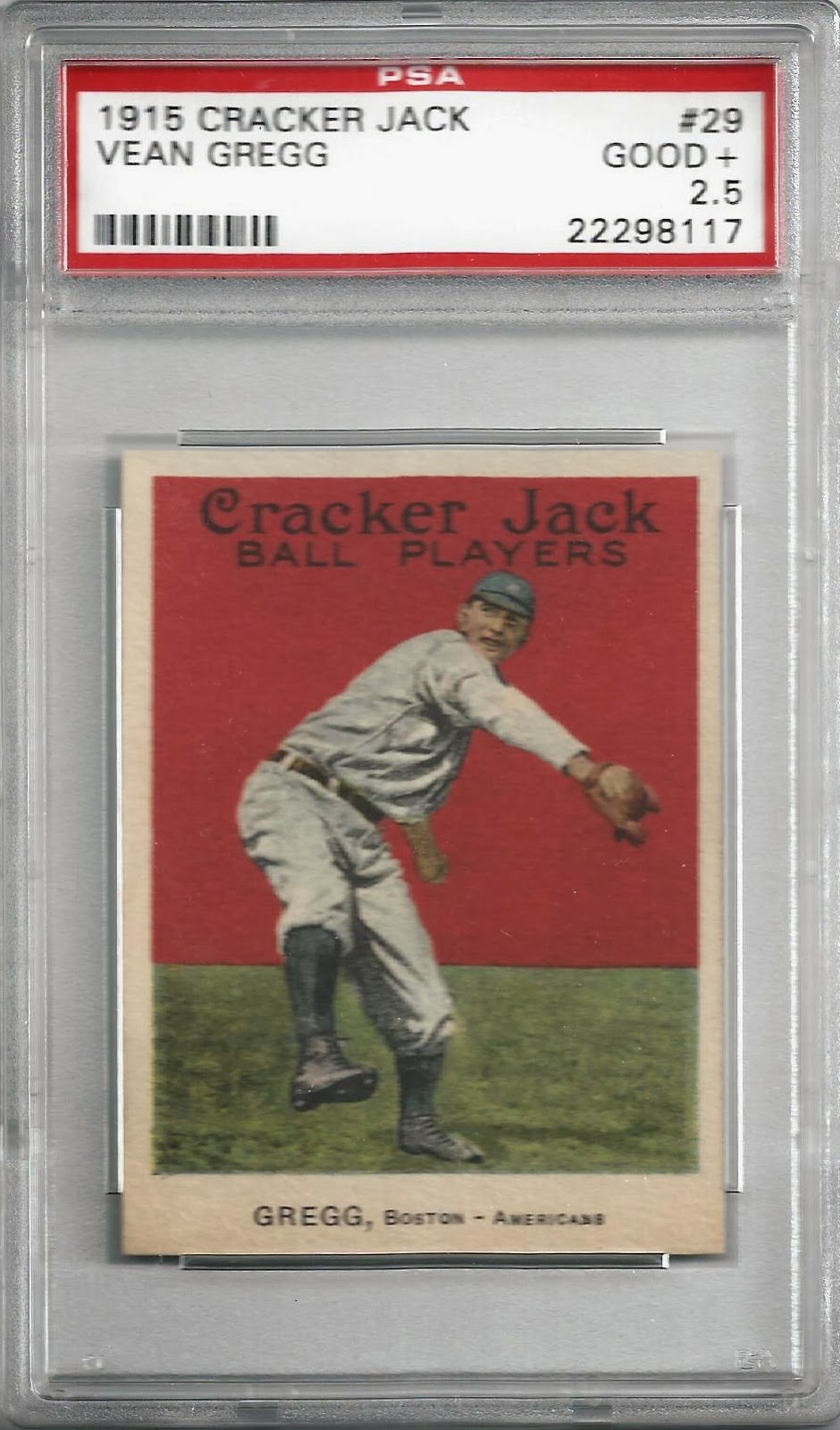 What a beauty!  Here's the thing though, this card got a lower grade than the one I'd been watching, despite seeming to be superior in every way.  A 2.5 Good+, really?!?!  I mean this card looks amazing, in way better shape than I could have ever hoped for in a nearly 100-year-old card.  Good, clean color, amazingly sharp corners, crease free and no paper loss.  If you had asked me blindly, I would have guessed this card would have scored a 6 (EX-MT) or 7 (NM) easily.  I don't profess to be a professional grader or anything, but just look at these two side by side: 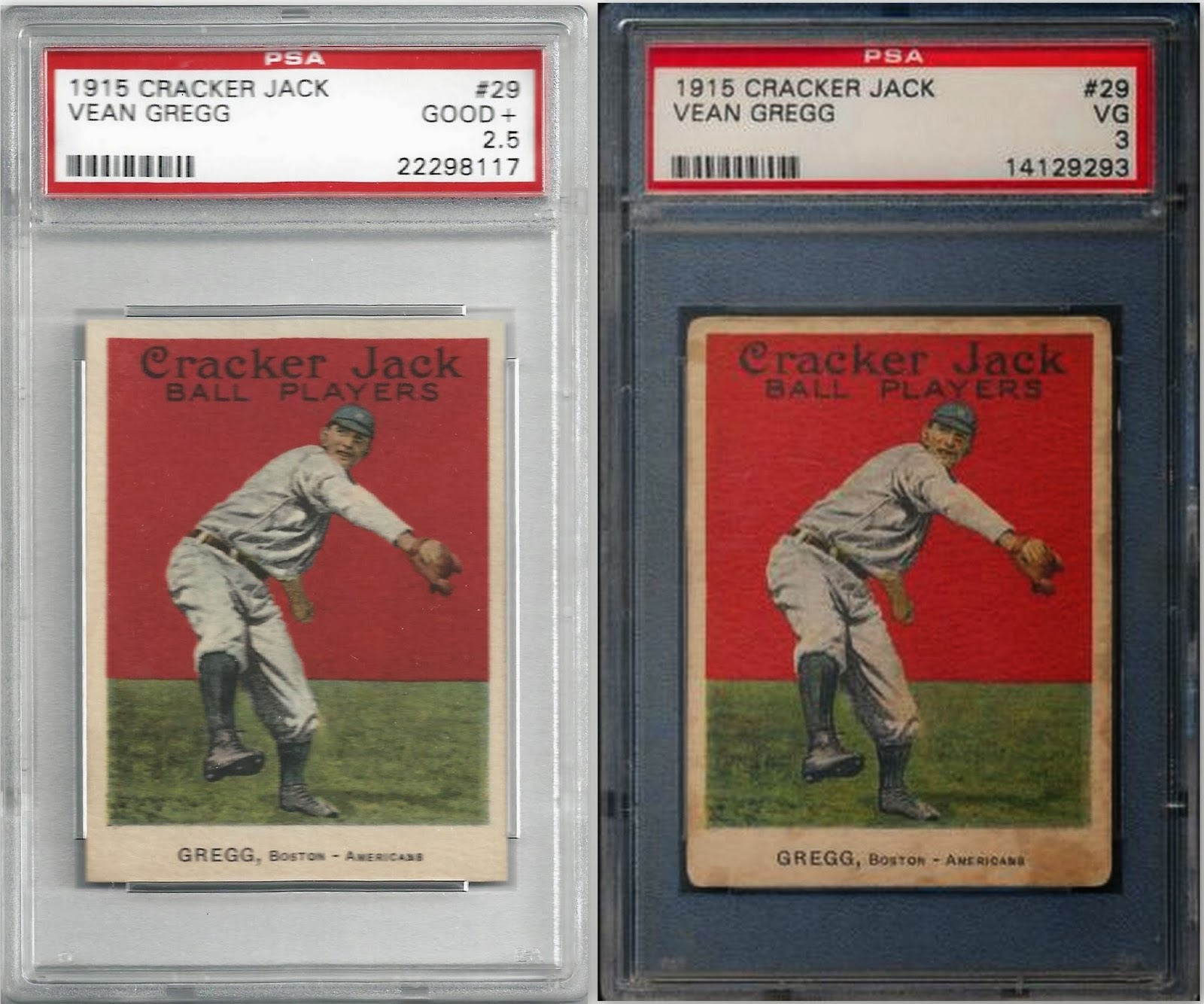 My card is on the left, the one where the seller is asking nearly twice what I paid is on the right.  If you can make any sense out of this then you're smarter than I am!  I even contacted the seller to see if he had any idea why the card graded so low.  He said he was mystified by it, and that if I ever figured it out he'd love to know.  I'm sure I'll never have an answer, but I'm satisfied just adding this fantastic card to my collection at a relative bargain price. 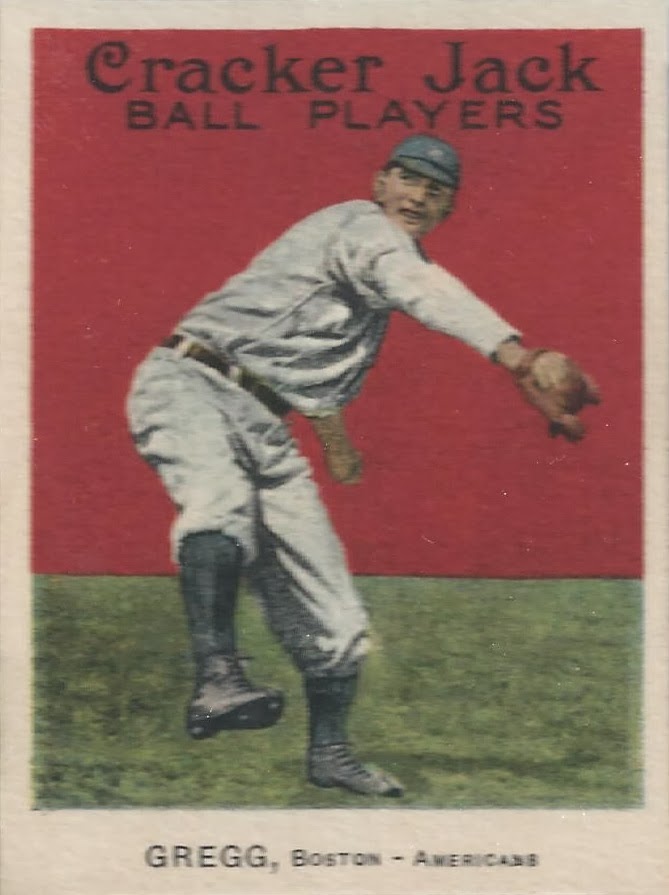 Here's a better look at the front, featuring a great wind-up from the southpaw.  Vean was an interesting player, as he came out blazing to start his career with the Cleveland Naps.  He won 20+ games in each of his first three MLB seasons, the only player of the 20th century to accomplish that feat.  See, if you've read this far you've learned something new today!

Not surprisingly Vean developed a sore arm the very next year (that's what 244, 271, and 285 innings pitched in your first three seasons will do to you!).  I guess you could call him the dead-ball era's Stephen Strasburg, and he never recovered to the same level again.  Gregg was a contributing member of both the 1915 and 1916 World Series Champion Red Sox teams though (albeit far from a significant contributor), so it's great to have his 1915 card in my Sox collection. 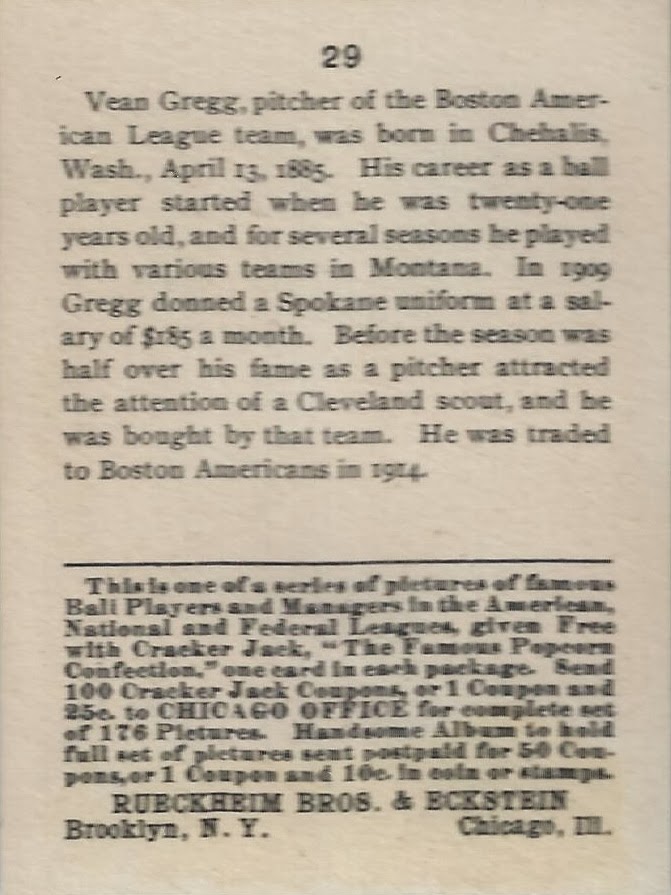 Vean staged an impressive late-career comeback where, after having been out of the Majors for years, he pitched a single season for the Washington Senators at age 40 in 1925!  If you'd like to learn more about him, SABR has a really good write-up here.  It's only a 5-10 minute read and they do a great job, much more fascinating than just reading his brief Wikipedia page...

At the end of the day, Vean was an interesting fellow from an era in baseball that I'm fascinated with, and I'm honored to have this extremely old card call my collection home.
Posted by shoeboxlegends at 6:30 PM

Not sure if this will help but you may find more information here.

back in the late 90s some friends and me got into the grading thing. We quickly found out that the more cards you send to PSA the better your grades would be. SO we started sending all our cards in together. If we got a grade we didn't agree with we would simply crack it open and send it in again. I can't tell you how many 9s we turned in to 10s.

Thanks guys. Adam, I've heard of this before and I think you might be onto something. As I said, it doesn't bother me because I don't really care what grade a card got, just that it's authentic. Maybe I'll save up all my "under-graded" cards, crack them all free and send them in a big batch to be regraded ;)