I was happy to see that Bill over at Thorzul Will Rule was once again hosting his annual "Trade Me Anything" series this year.  If you're not familiar with Thorzul's blog, he basically busts a box of Topps Update and offers up all the cards he has no interest in keeping.  You claim whatever cards you want, and agree to send him "anything" in return.  Anything at all (with a few exceptions, obviously).  You don't even have to tell him what's coming, in fact he doesn't want you to.

Anyway, this year I just happened to be catching up on posts right around the time the trade bait went up, so I basically had first dibs on anything.  In the end, there was only one card that interested me.  I'd never heard of the Etched in History Commemorative Relics, but it sounded interesting enough so I staked my claim. 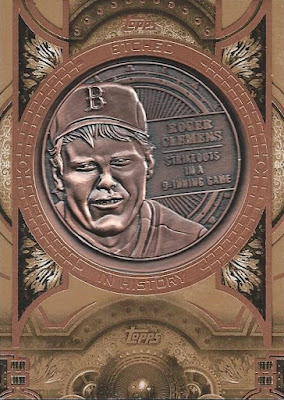 The other day the card showed up, and while I'm generally not a fan of manufactured relics I have to say that it's very impressive in hand.  I ended up seeing a couple of these in display cases at the show last Friday so I had an idea of what the cards looked like, but I was definitely unaware of how thick and heavy they are. 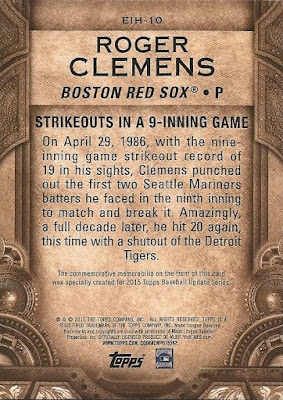 A very cool addition to my Red Sox collection, and it gave me a great excuse to de-clutter and send an entire box of stuff out in return.  I'd call that a win for both parties, and I certainly hope to participate in this again next year...
Posted by shoeboxlegends at 9:51 PM