Tracking Down the Fredericton Express

At a card show a while back I saw a hockey card that really interested me.  When I inquired about it, the vendor told me it was "probably the only card that's not for sale".  I'm not sure why you would pay hard-earned money to rent a table at a show, only to display cards that aren't for sale. 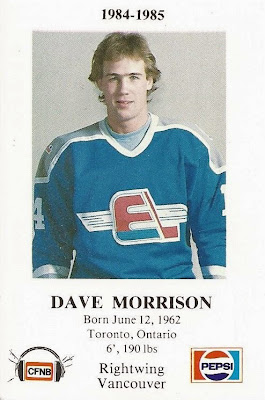 Anyway, I made a mental note of it and a couple of weeks later I found not only that card, but the entire team set that it's a part of on eBay for a grand total of $4.95.  Joke's on that vendor, I would have probably forked over more than that for just the one card I wanted at the show.

This is one of those local "police" sets that were so popular in the '80s.  Don't recognize the logo on that sweater?  Don't worry, neither did I before I ended up buying these.  That is the jersey of the Fredericton Express.  They were an AHL franchise that existed from '81-82 through '87-88.  They were affiliated with  the Quebec Nordiques (you can definitely see the similarity in the logo here), as well as the Vancouver Canucks during their brief existence. 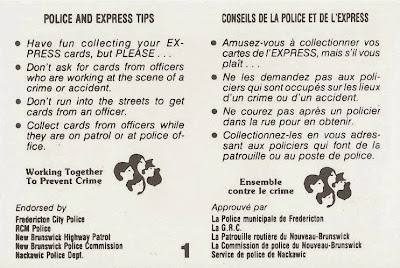 Here's a look at the back, where you get police safety tips in both English and French! 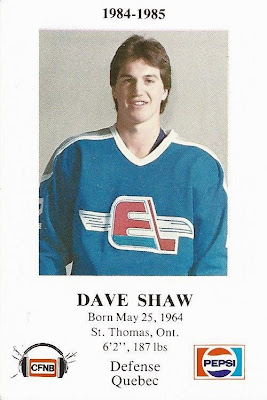 There's not much to the front design.  Sponsored by Pepsi, as well as a local radio station. 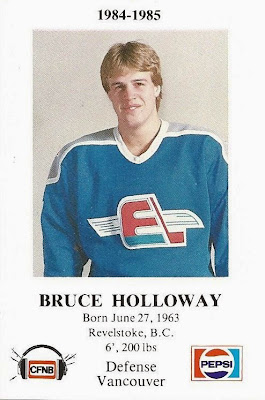 There are a lot of obscure players in the set, like Bruce Holloway here, who has 2 NHL games to his credit. 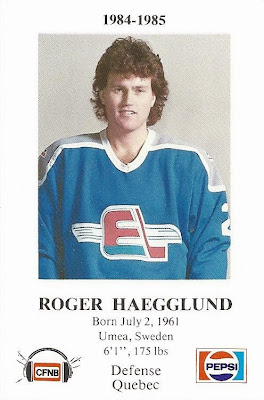 I don't know the first thing about most of these guys, but since I scanned and cropped all the cards I included the full set here.  Hardcore hockey fans will recognize a few names, casual fans probably not many.  I saved the card that turned me on to the set for the very end of the post.  Feel free to scroll past all the mullets and other hockey hair right to the bottom if you can't stand the suspense. 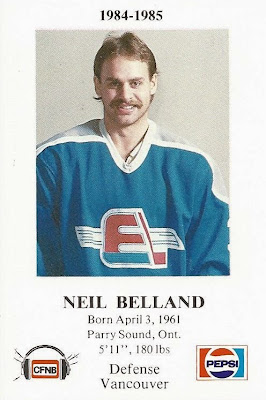 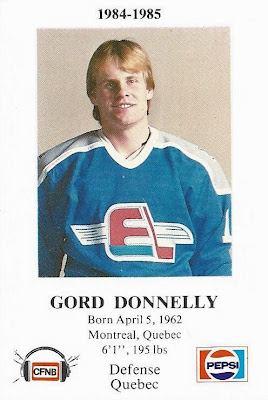 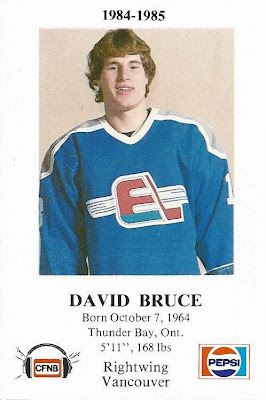 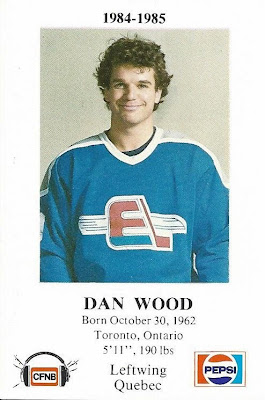 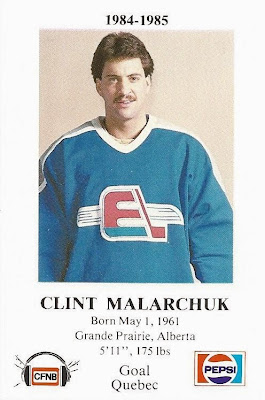 Definitely recognize this name!  Will forever be remembered, at least in my mind, as the athlete who suffered the most grisly injury during play that I've ever seen. 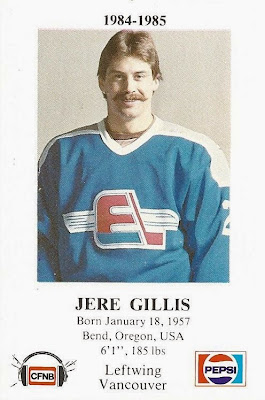 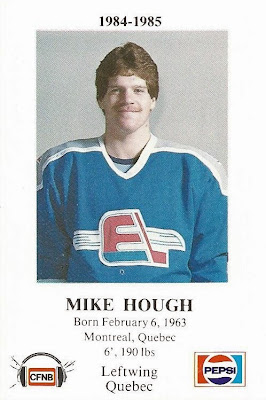 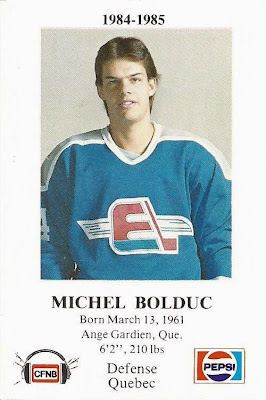 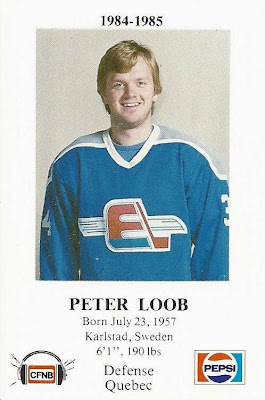 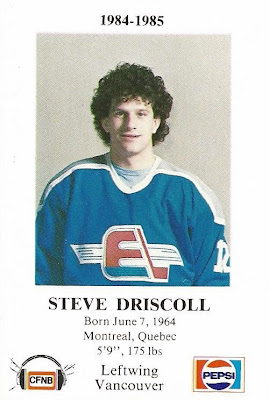 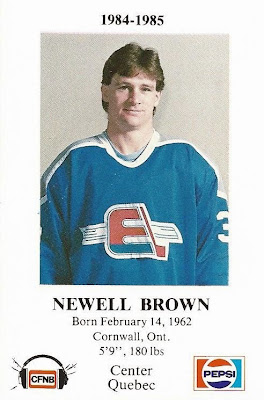 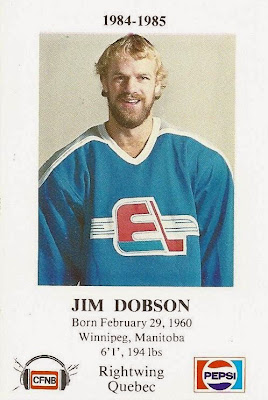 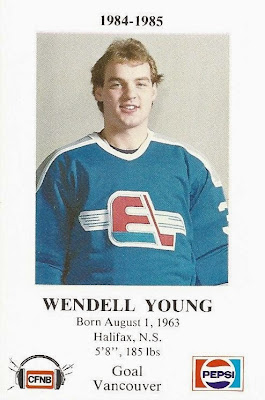 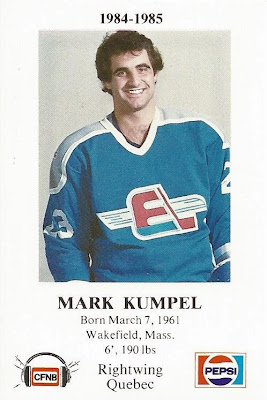 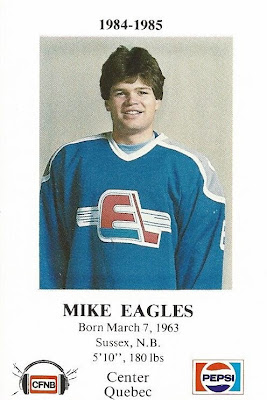 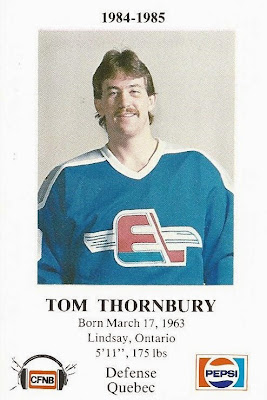 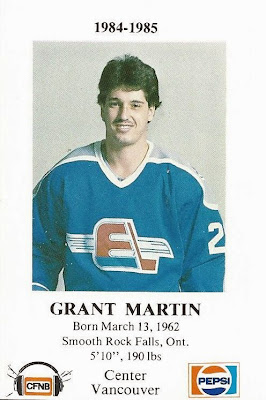 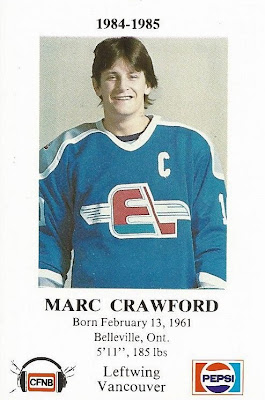 Here's another one most fans of the game will probably recognize, though more so for being a head coach than a player. 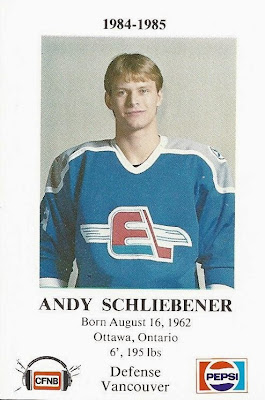 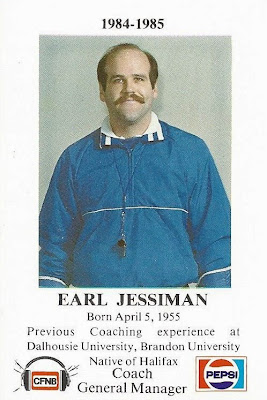 Like any good police set, you're going to have cards of non-players/staff. 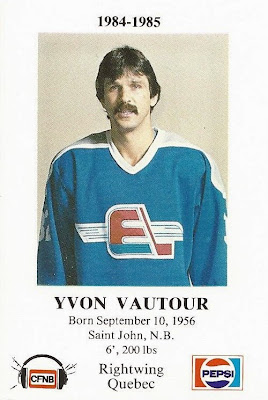 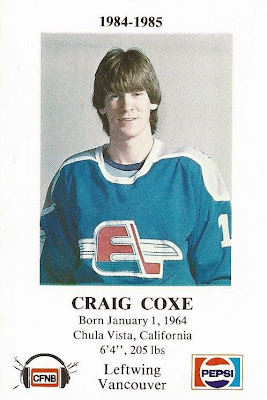 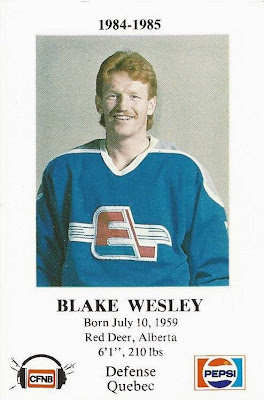 Alright, now for the card that was the catalyst for this team set purchase. 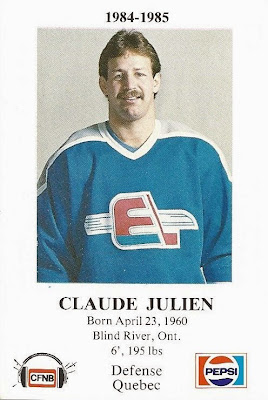 Ta-da!  Yet another addition to my very small collection of hockey cards featuring current Bruins head coach Claude Julien.  This one provides some proof that at one point Claude actually had a full head of hair!  The card was just too random not to own a copy of once I learned of its existence.  The other cards in the team set were just bonus material, even if I end up getting rid of them someday I'll surely hang onto Claude here!

Do you have a favorite card in your collection of someone who's well known as a coach, but barely remembered as a player?  This one would be up there for me...
Posted by shoeboxlegends at 11:13 AM

As a Cubs fan, I may be obligated to loathe him entirely, but Tony Larussa is that guy for me. It absolutely blew my mind when I not only found out that he had been a player, but even played in one game (just one) with the Cubs as a pinch-runner.

I don't know if I own one or not but I should, Coach Q, Joel Quenneville. By the way, if that guy named Peter (somewhere in your middle of nobodies) clocked you real good would it be called a "Loob job"? ;)

Loads of Kitchener Rangers alumni in that set. Shaw, Bruce, Hough, Young, Eagles and Martin in there. You might also remember Craig Coxe for a pair of great brawls against Bob Probert.

What a cool set! I really enjoyed seeing future Pens goalie Wendel Young in with a neat mix of different players.

That's some sweet cardboard you have there. Wouldn't have recognized Julien if his name wasn't listed on the card.

Blake Wesley played for a couple of NHL teams including the Hartford Whalers. His brother Glen played for the Bruins and then the Whalers/Hurricanes.

Congrats on the great find

I had to take a look at someone. I'm from a few hours out of Thunder Bay (small town vcalled Terrace Bay) and David Bruce caught my eye.. Had to look him up..

Always interesting to see things like this. Great find

I knew that's how it would end! Julien was quite the AHL journeyman!