Another quick one today, let's take a look at the fifth card towards my budding 1950 Bowman baseball set: 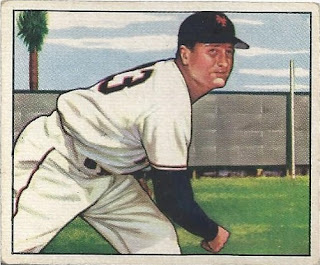 Today's subject is Jack Kramer, who had the flattering nickname "Handsome Jack".  He began his MLB career with the St. Louis Browns all the way back in 1939.  Kramer would remain with that franchise through 1947, with the exception of a couple of years where he served with the US Navy Seabees in World War II.  I certainly have tremendous respect for Mr. Kramer for that alone.

Upon his return to the Browns, he was named an All-Star for three consecutive seasons beginning in 1945.  At the conclusion of that run St. Louis dealt him to my hometown team, the Boston Red Sox.  After two years in Boston he'd move on to finish his career with the team he's depicted with here, the New York Giants, and even played a few games with the Yankees to close it out before he was released for the final time in 1951. 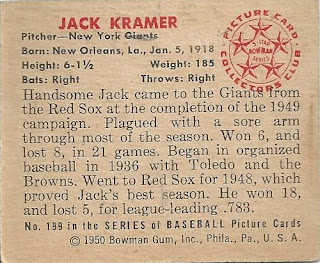 Here's a look at the back, which references not only his nickname but his fantastic 1948 season with the Red Sox.  The right-handed starter went 18-5 for Boston that year!

Another example of an interesting backdrop on this one, between that strange outfield wall and lone (palm?) tree.  These are just too cool, I never get tired of acquiring new cards from this beautiful set.  5 down, 247 to go!

Just a great card from an amazing set. Good luck in the chase. I'm looking forward to more of these posts.

I don't know if it makes any sense but there's a kind of innocence to those 1950's. Maybe it's just simplicity?

Love this set. And I think the simplicity plays a huge factor for me.