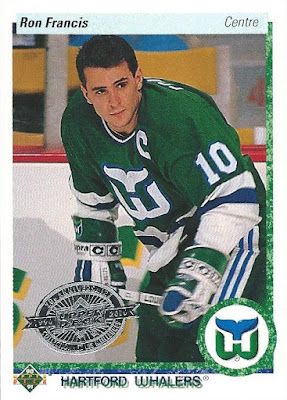 Why?:  After commuting into and out of downtown Boston at peak traffic times the past two days to attend a security conference, a one card post is about all I can muster tonight.

This card is a good example of patience paying off.  As a fan of buybacks, and a huge Whalers fan, it was obviously a prized target for me when these buybacks were released years ago now.  I grabbed a few Whalers over time, but these cards are actually pretty tough pulls and I only saw a Ron Francis surface one single time.  It was on eBay a few years back, and I was out-sniped at the last second.  My maximum bid was somewhere around $12, and when it sold for just a hair over that I was cursing myself for being a cheapskate when it came to a Whalers card I very much wanted and might honestly never lay eyes on again.

Well, you can imagine my surprise when after another couple of years this card surfaced in my inbox this past February, having triggered one of my saved eBay searches.  I wasn't going to let it slip through my grasp a second time, so I was willing to go quite a bit higher than last time if it came down to it.  Well, as you can see above that didn't happen, and I ended up taking this card home at long last for less than half of what the first one went for.  It may have helped that the seller incorrectly listed it as a 2016 card, then again maybe not. 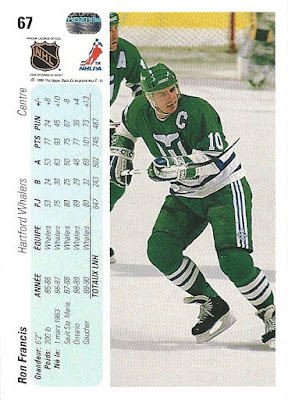 One of those little hobby victories that can be oh so satisfying. 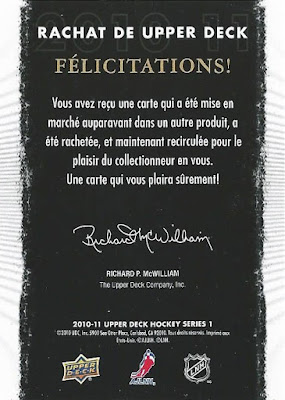 Missing this card the first time around, and having to wait this long for another shot at it, just makes me appreciate it even more.  One of my most satisfying Hartford Whaler pick-ups of 2017 to say the least!
Posted by shoeboxlegends at 8:52 PM

Congrats on the pickup!

Pretty cool! I notice it's the French version as well.

That's a nice price for a Ronnie Franchise buyback. Patience sure does pay off sometimes.

I hate the feeling of being outbid at the last second and you start second guessing whether or not you should have entered a higher bid. Glad you were able to add a copy to your collection the second time around.