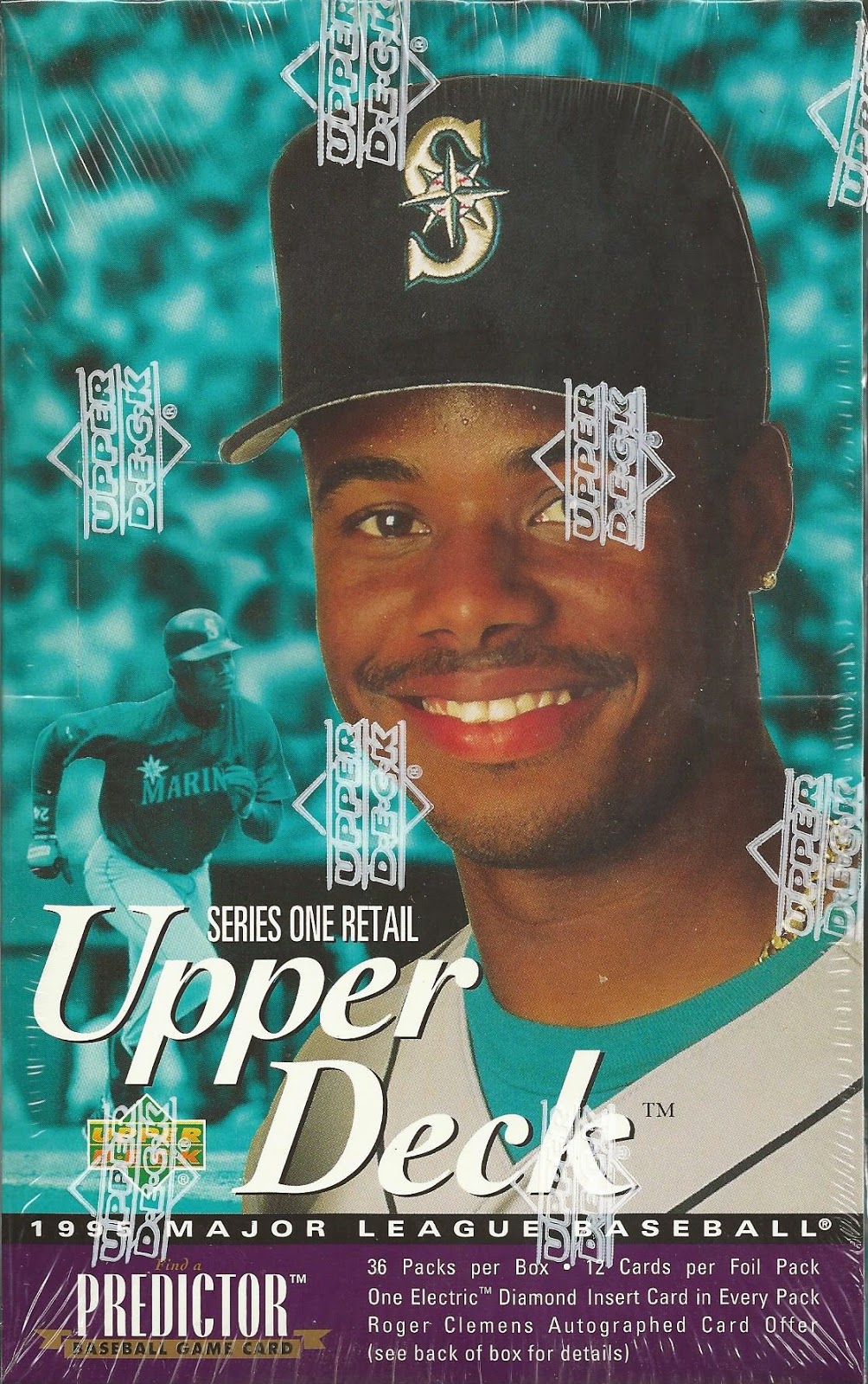 1995 Upper Deck baseball has some special significance to me.  As someone who enjoys an under-stated design where the photography is the star of the show, the cards are beautiful.  Compound that by the fact that this set was released when I was 13 years old, and thus features many of my favorite players and boyhood idols, and you've got a recipe for success.

I had a good chunk of these as a kid, but they didn't survive the years and were lost somewhere along the way.  When I was looking for an add-on item to get me over a free shipping threshold recently, I was excited to find a retail box of Series 1 for just a hair over $20.  Should be a blast opening these packs and enjoying this set a second time around. 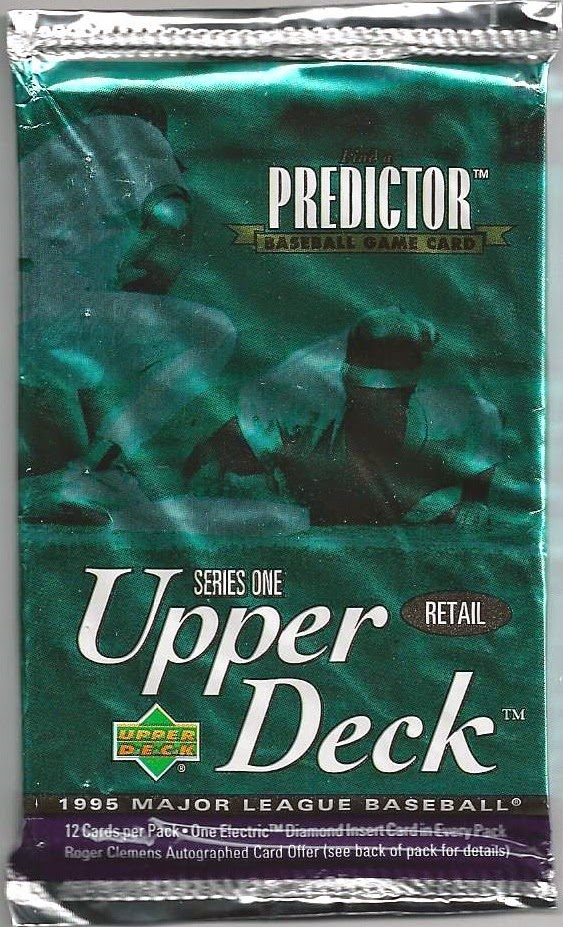 The very first pack out of the box was a perfect example of why I cherish this particular Upper Deck release.  Let's see what 12 cards I found inside this mid-'90s Upper Deck foil wrapper... 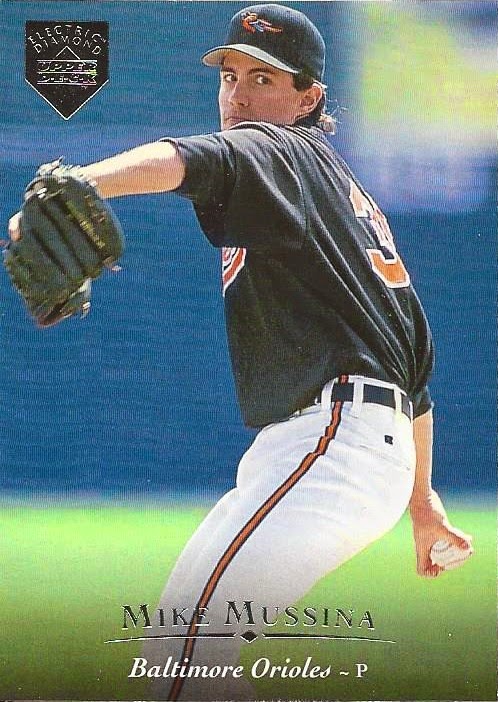 Electric Diamond parallels fall at one-per-pack, and I'm sure most of you are familiar with these (or their Electric Ice hockey counterparts).  Not a bad player at all for my first parallel of the box!  That's going to be a theme for this pack, a lot of star power in these dozen cards. 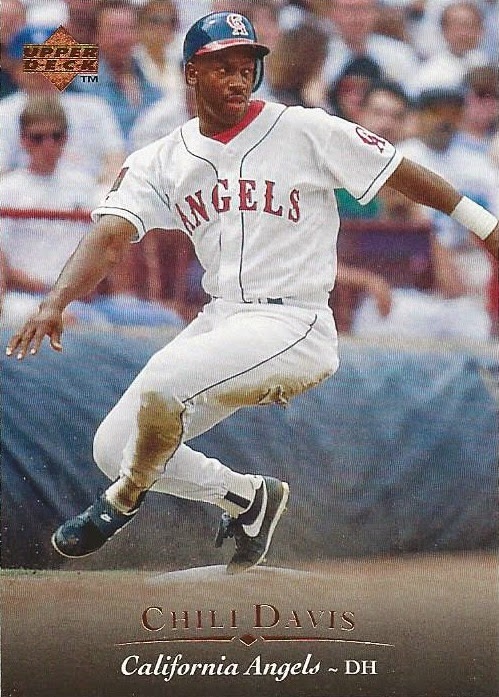 I'm sure you've all seen the design a hundred times over.  Full bleed photo, team name and position at bottom, player name above that in gold foil.  The 2008 Upper Deck flagship set, which also happens to be a personal favorite, was very similar to this design, but with silver foil and a modified layout of team name and position. 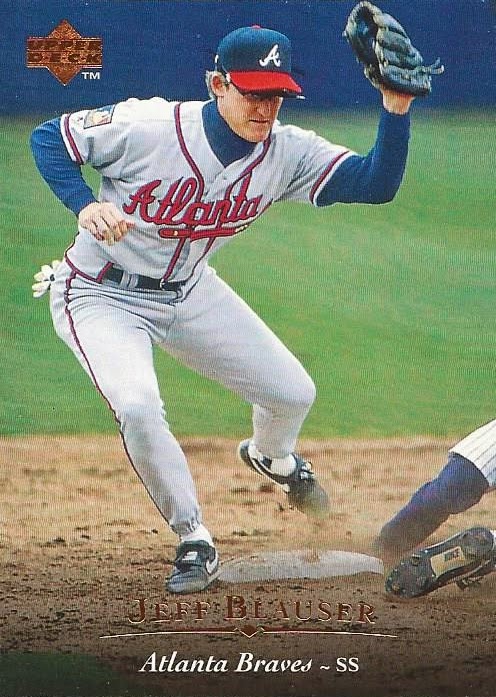 The photographs are the top-notch quality everyone has come to expect from Upper Deck over the years.  Helps makes an otherwise boring common, like this Jeff Blauser, a little more appealing. 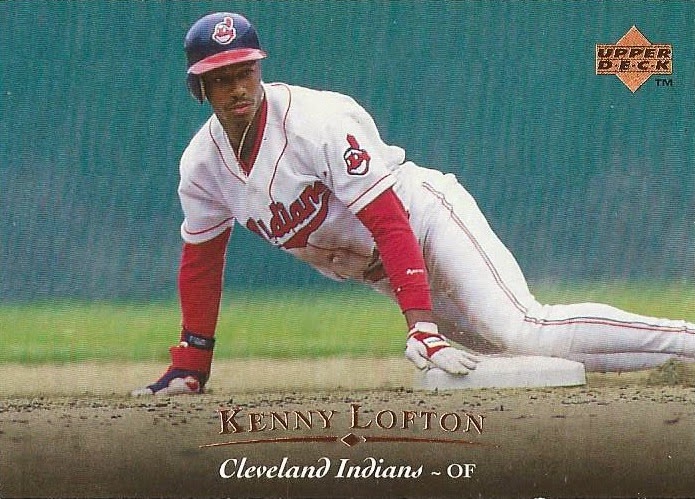 I'm not someone who's bothered by horizontally-oriented cards, in fact when the design calls for full-bleed photos I generally enjoy them even more than their vertical counterparts. 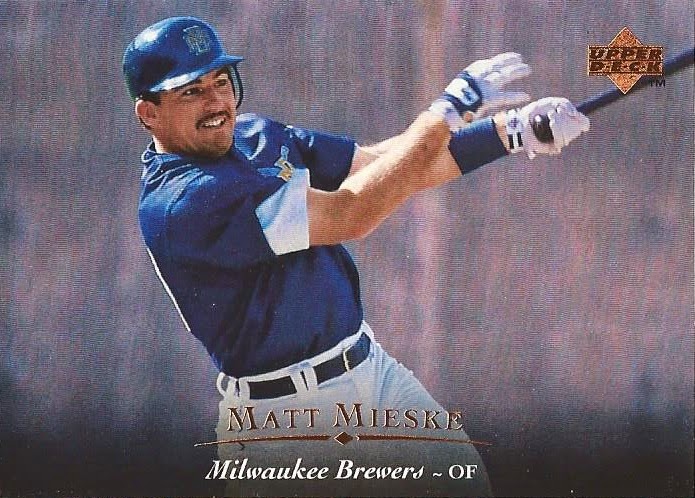 Okay, not everyone in this first pack is a household name... 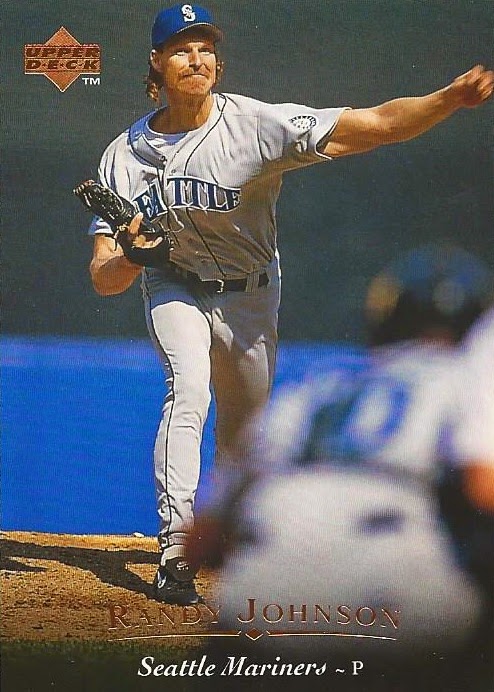 Another of Randy Johnson's cards that reminds me of how terrifying it must have been to stand in the batter's box with his mullet flapping around on the mound. 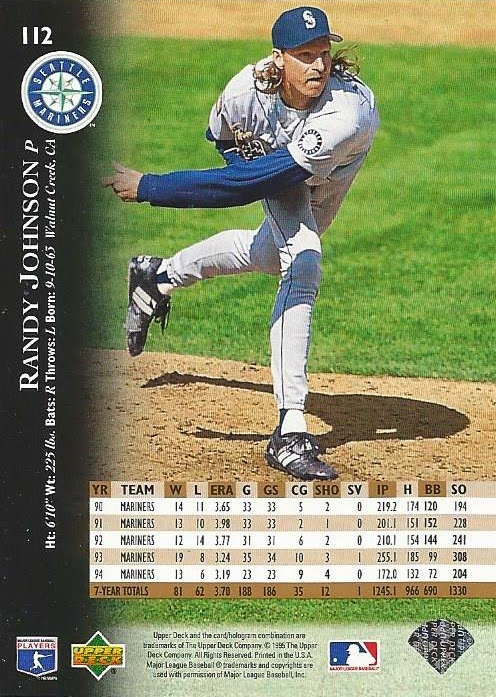 The backs are well designed in my opinion.  Again the focus is on the photograph, but they managed to fit a few years of stats and some biographical info on the card in a manner that looks nice. 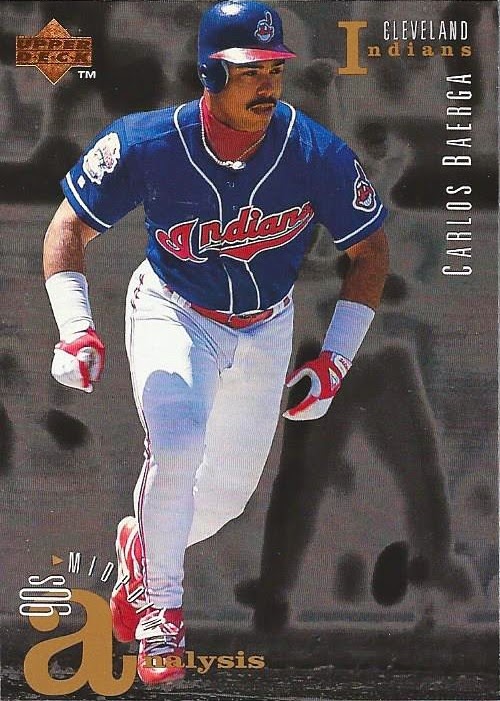 The subsets are not as successful in my opinion.  This Carlos Baerga is a little busy for my taste, looks like a lot of other product being released at the time. 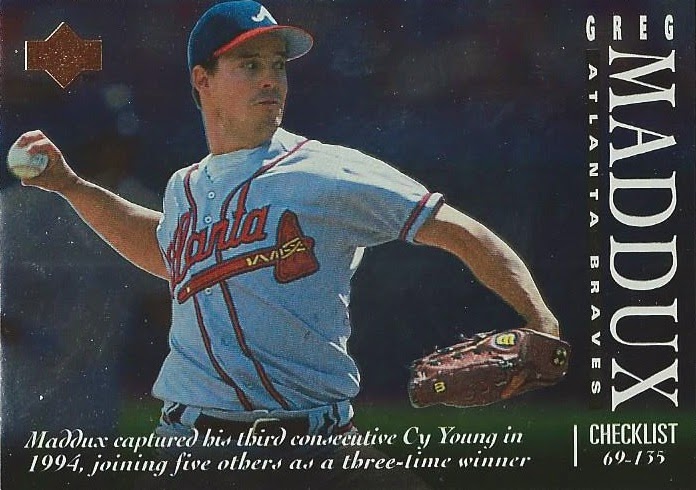 This checklist card is actually an insert, I guess.  They're not part of the standard set, this one's actually checklist #5A.  Nice shot of Maddux in his prime. 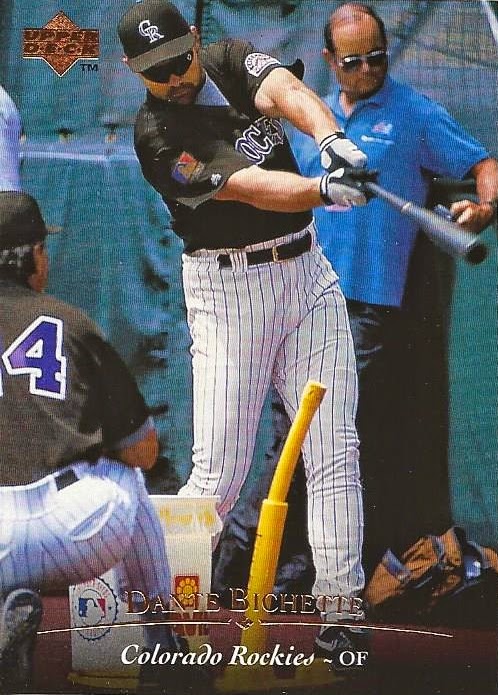 My favorite card in the pack.  Epitomizes the kind of quirky photography I love most from UD.  We've got a little bit of everything in this shot.  A ballpark employee apparently on break, checking his phone with his tool belt on the ground, a sunflower seed bucket, and of course a wiffle ball tee.  What a card! 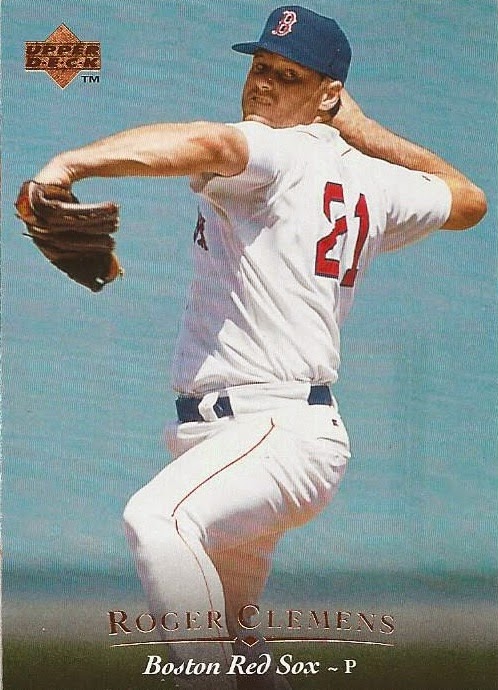 This pack was full of stud pitchers.  You could create a hell of a starting rotation with these players, Randy Johnson, Greg Maddux, Roger Clemens and Mike Mussina, not bad... 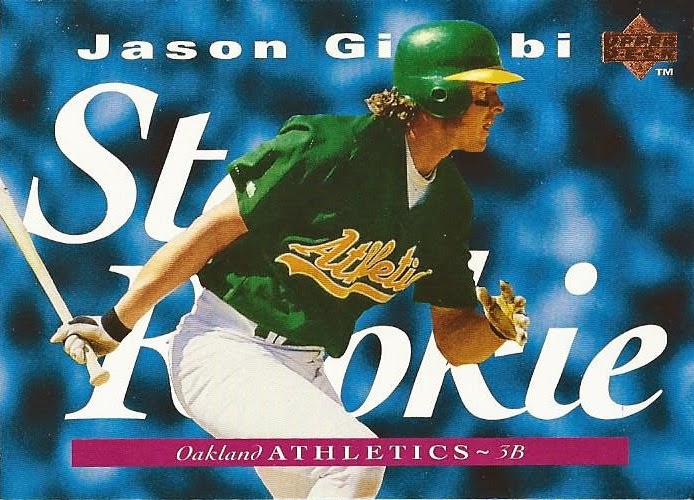 Again, not a huge fan of these Star Rookie subset cards.  Just way too busy, my least favorite cards in the pack.  Giambi's a relatively big name at least amongst the players in the subset. 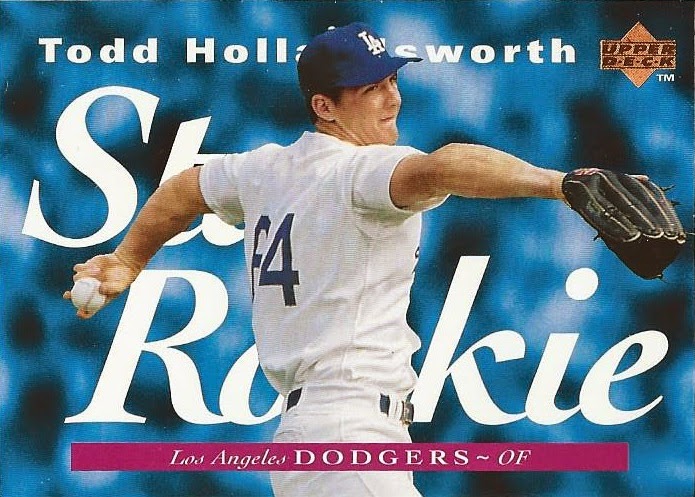 Well, that wraps it up.  A great first pack by any standards.  I'm truly excited to slowly enjoy this box over the next few months, ripping a pack here and there and taking a stroll down memory lane.

I'm sure I'll be posting a few more of these in the future...
Posted by shoeboxlegends at 1:14 PM

95 UD is a set that stuck with me as well. It was actually the football version that hooked me. But the set is one of the cleanest, subtle designs there is, and the photography really speaks for itself.

I'm hoping to put the set together one of these days.

This is a nice looking set

I have great memories of the basketball set as well. Also some not so good memories- the only card I ever had but don't any more came from this set. The only one in 27 years collecting. But I remember it being the first set that I realized I had a promo of, which felt like a big discovery to me at the time. I started collecting basketball in 1995-96 so it was the first UD set I saw, and I really enjoyed it then, as now. They also used the design twice in NASCAR, for the flagship 1996 set, and the 1996 Road to the Cup set, which was all foil, and one of the earliest boxes I remember doing- probably around 10th overall. I actually ordered it from QVC, for some unknown reason, as we had multiple local shops at the time.

Nice baseball rip. I actually know a few of those guys!!

My stupid, younger self used to hate 1995 Upper Deck for no good reason. I've come around on it since. I love the understated design and the photography is some of UD's best. I have that Bichette in my Just Commons cart as we speak.