One of my goals for this year (though I don't typically state them formally) is to post here more frequently.  I don't think I will ever be a "post-per-day" blogger, just way too much going on with work and other personal things to likely ever post at that frequency.  I have been somewhat consistent in the past though, with at least 100 posts in each of the 7 years that I've run the blog so far, and an increasing number of posts over the past couple of years specifically.  In fact, my 190 posts last year was an all-time high for me, and I'd like to cross the 200 post threshold this year if I can.

As I mentioned, I just don't have the time to write an extensive post with 20-30 scans and a lot of commentary most weekdays.  On at least some of those days this year I'm going to throw up a really quick single card post, just like this one.  While I do generally believe in quality over quantity, I also believe in quantity over nothing I guess.  Either way, should make a nice quick read for anyone that decides to stop by.

Alright, now that I've gotten all that out of the way, here's our first card: 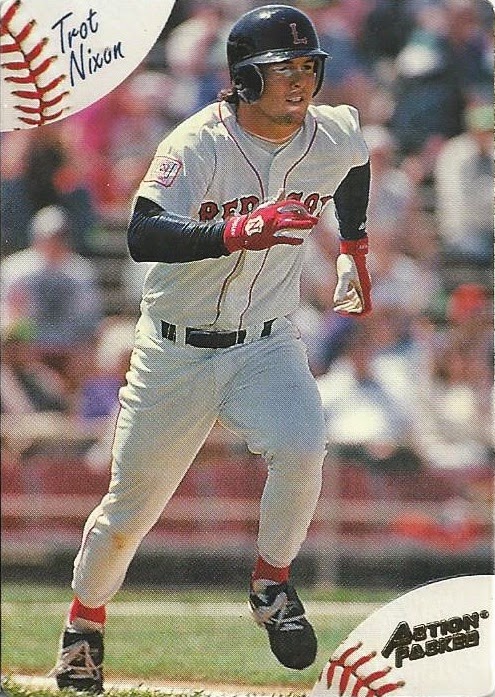 What:  1994 Action Packed #2 - Trot Nixon
Where:  COMC
How Much?:  $.43
Why?:  Always liked Trot "Dirt Dog" Nixon during his time with the Sox.  Just the type of player who, while maybe not the most talented guy on the diamond, seemed to epitomize hustle and grit.  Aside from that I find minor league cards interesting, and I've always loved Action Packed's embossed cards.
Other:  The back of the card contains some pretty interesting facts: 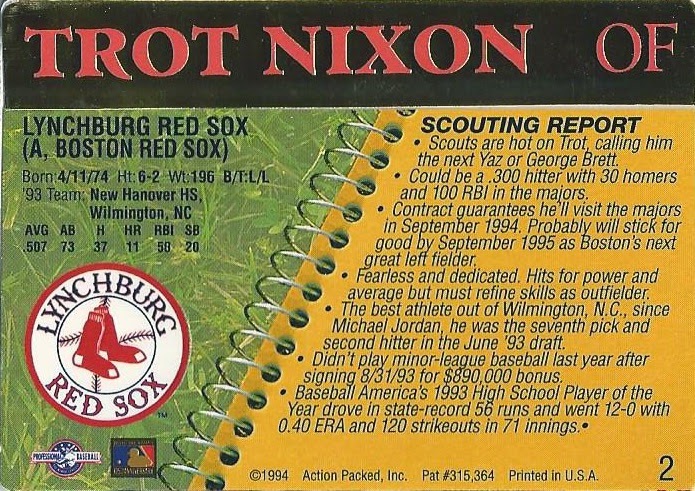 I think calling Trot the next George Brett or Yaz might have been a bit much, no?  I also had no idea that Trot used to be a star pitcher in high school...
Posted by shoeboxlegends at 1:46 PM

I remember watching Game 3 of the 2003 ALDS in a hospital (I was visiting). When he hit the home run to win the game, the whole room cheered. Very cool memory.

Hah, I remember the home run but don't have a cool story. Witnessed that one from the couch!

Nice to be mentioned in the same breath with MJ but that's kind of a distant second.