Collecting Whalers - Tipped Off By My Dad

Recently I was tipped off regarding an awesome deal on a "pick any 10" lot of 1979-80 O-Pee-Chee cards that was listed on eBay. The person who tipped me off to the auction? My Dad! The coolest part is that the reason he sent me the link is that he noticed that quite a few of the cards in the lot were on my Whalers want list here on the blog.  You see, while I completed the '79-80 Topps set a while back, my '79-80 O-Pee-Chee cards are extremely lacking.  Here are the 10 cards I selected for my $5.99: 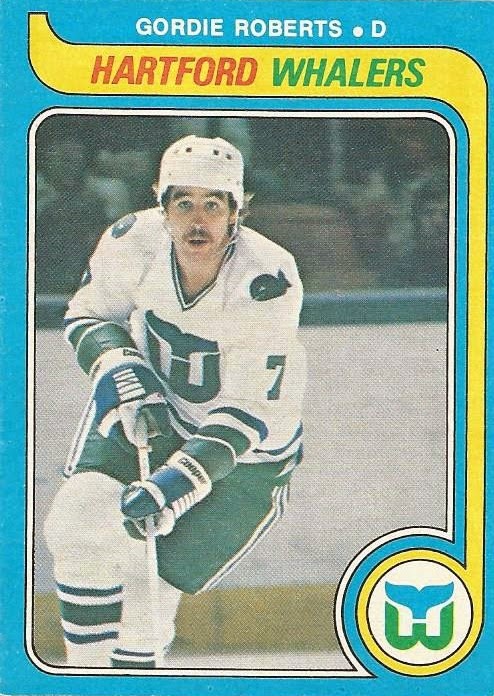 I decided to lead off with this sweet Gordie Roberts card for a couple of reasons.  First, he was a member of the inaugural Whalers NHL team, having transferred over with the New England Whalers when the WHA folded.  Secondly, and more importantly, I met and even skated with Gordie and his brother Doug quite a few times at summer hockey camp as a kid over the years (another thing I can thank my Dad for).  Gordie would go on to play well over 1,000 NHL games, and is a member of the US Hockey Hall of Fame. 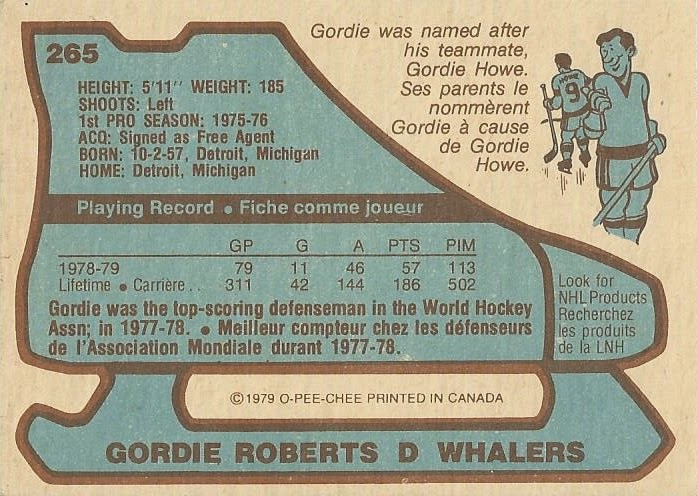 This card also has the best cartoon of the 10 that I picked up in this lot.  I highly doubt that when Gordie's parents named him after the great Mr. Hockey that they had any inclination that the elder Gordie would play for so many years that he would end up as an NHL teammate to their newborn son! 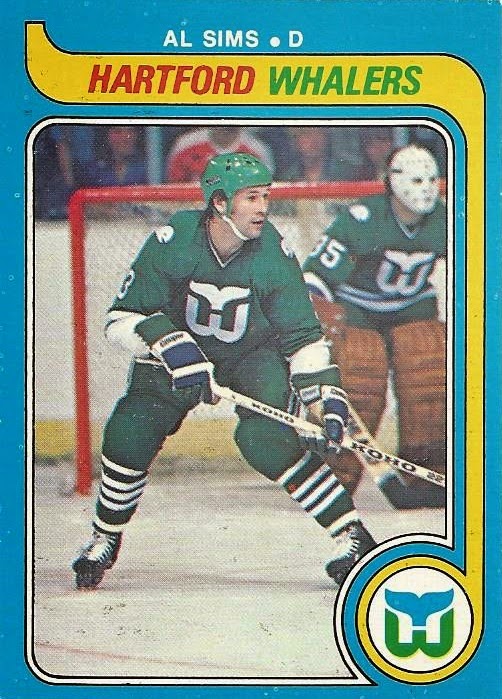 Al was defensive partner to the great Bobby Orr for a couple of seasons with Boston, and after his playing days were over he stayed involved in the game as a coach.  He even ended up at the helm of the San Jose Sharks for one season in the mid to late '90s. 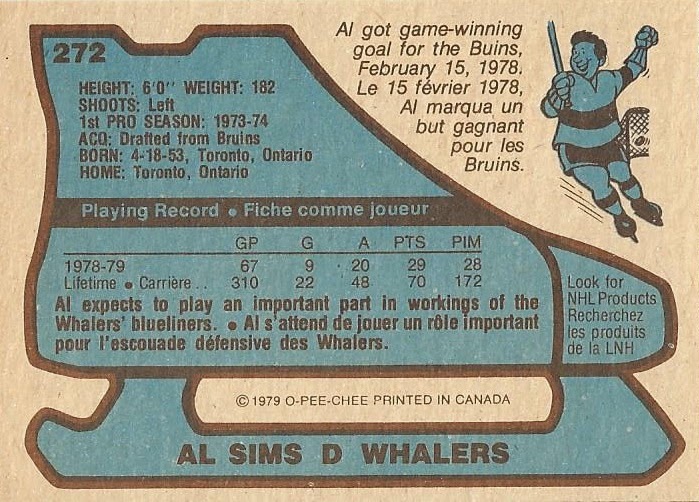 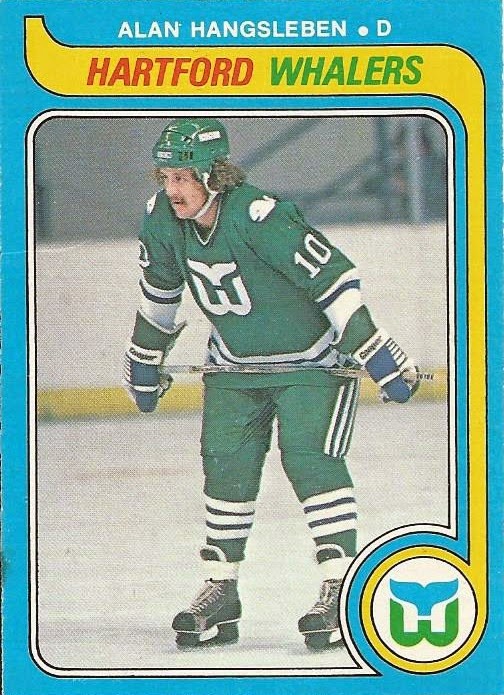 I can say with confidence that this is my first ever Al Hangsleben card.  He has only one other official card released during his playing days, which came in the '81-82 OPC set. 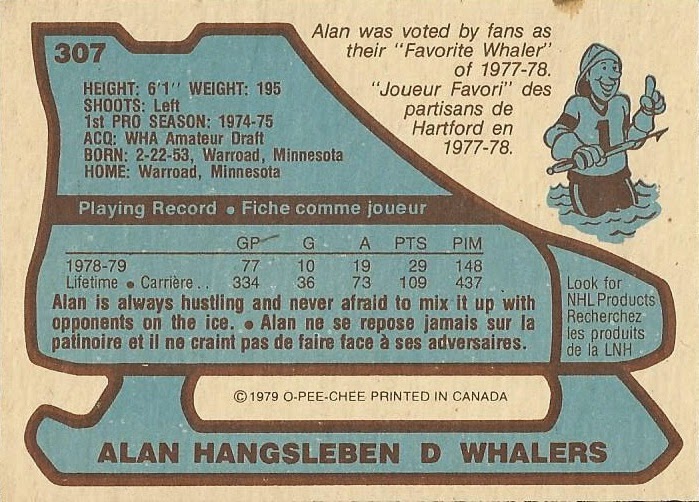 I've said it many times before but I'll say it again, '79-80 OPC/Topps have the best card back design of all-time.  Any sport.  Just one man's opinion, but I know a lot of collectors who share it... 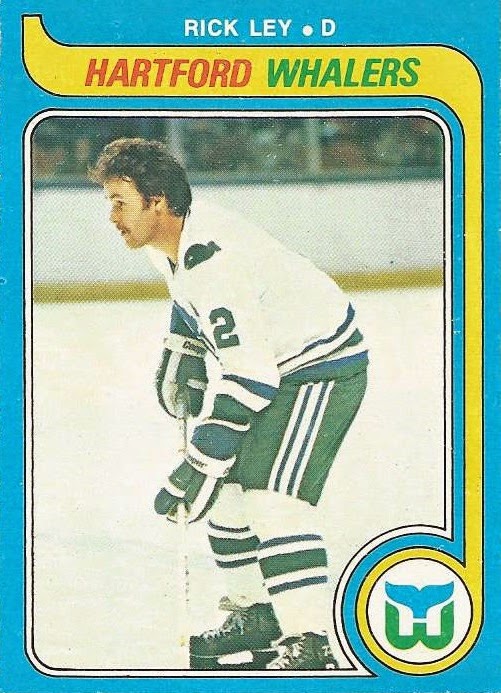 Probably the most well-known Whaler within the fan base among the cards in this lot, Rick Ley played for the New England Whalers for their entire WHA run.  He stayed on with the team for another couple of years after the move to the NHL, and served as team captain for quite a few seasons.  Later he'd actually coach the Whalers for two years, as well as serve as an assistant coach behind the bench in Toronto. 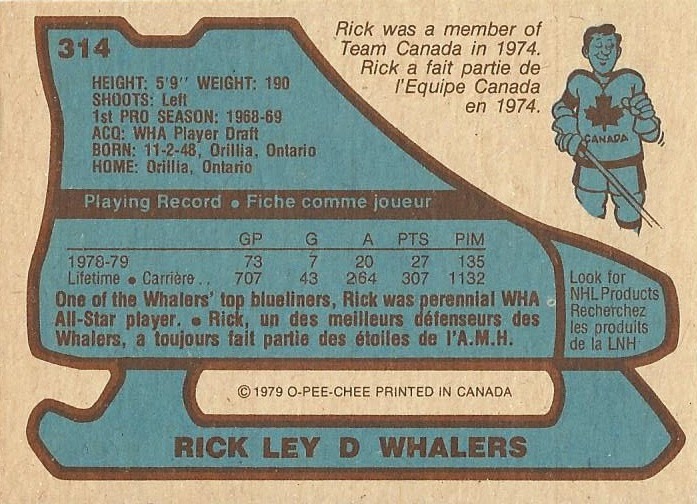 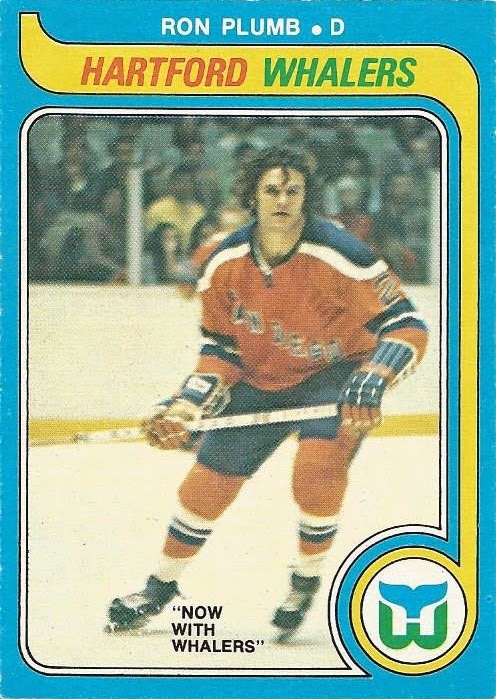 Best thing about this card?  It is true that Ron Plumb was "now with Whalers" for the '79-80 season, however he was also with the New England Whalers in '78-79, so it seems as though the folks at O-Pee-Chee simply didn't have a photograph of him from that season despite the fact that he appeared in 78 games.  How about the season before that?  He started with the Whalers and was traded to the Cincinnati Stingers.  The two years before that he was with the Stingers as well.  The last (and only) time that Ron played with the San Diego Mariners, the jersey he's depicted in on this card, was 1974-75.

So, we get a 5-year-old photo and a somewhat inappropriate "now with Whalers" designation... 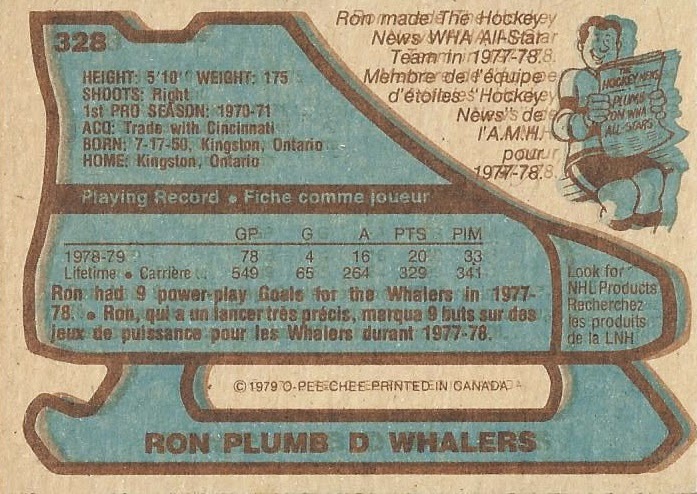 Maybe if I enjoyed a couple of beers first I could actually read the back of this card perfectly. 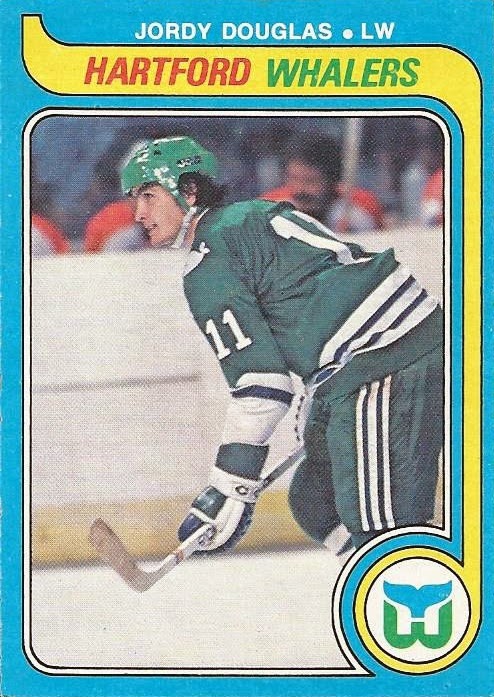 Don't have much to say about Jordy Douglas, so I'll take this opportunity to say that these cards were in much better shape than I expected.  Since there were a ton to select my 10 from, I was going sight unseen with this purchase.  Didn't really care for just over $5, but I was impressed and I'm glad I took the chance on the lot. 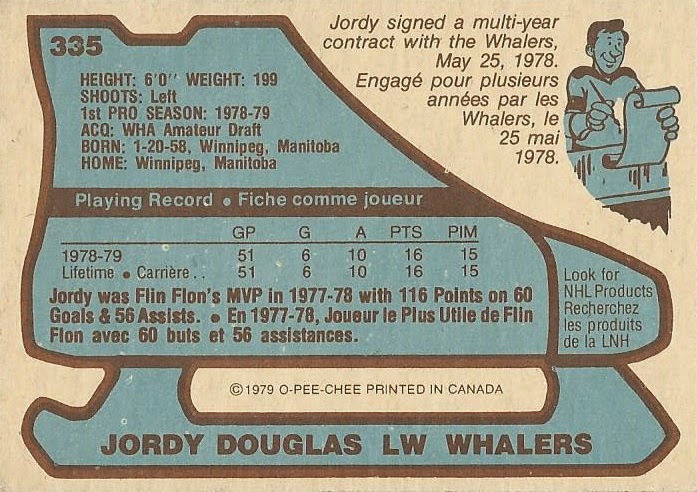 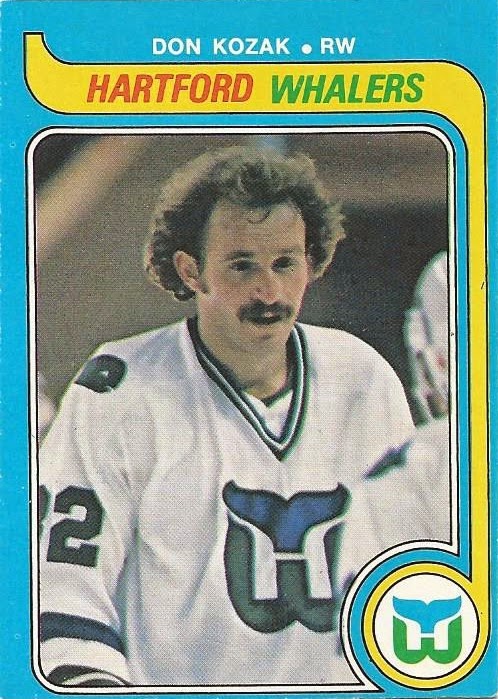 Probably the worst-centered card in the lot, but worth it for the awful airbrush job.  Career games played by Don Kozak for the Whalers franchise?  Zero. 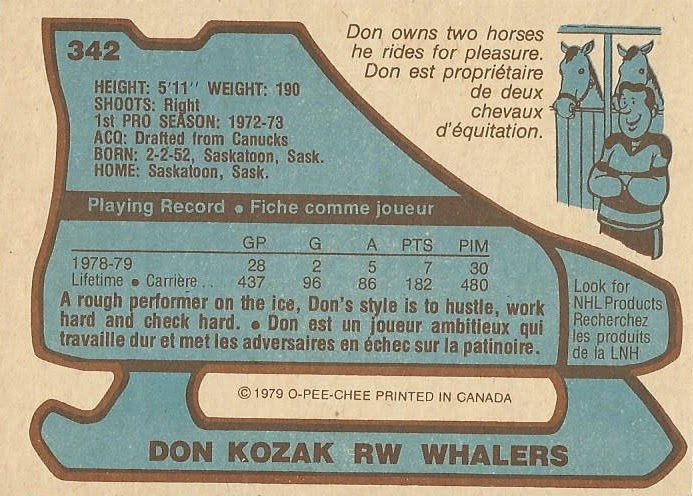 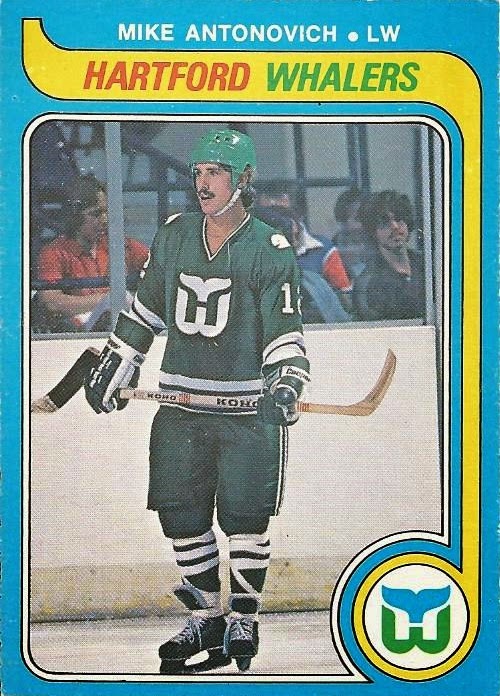 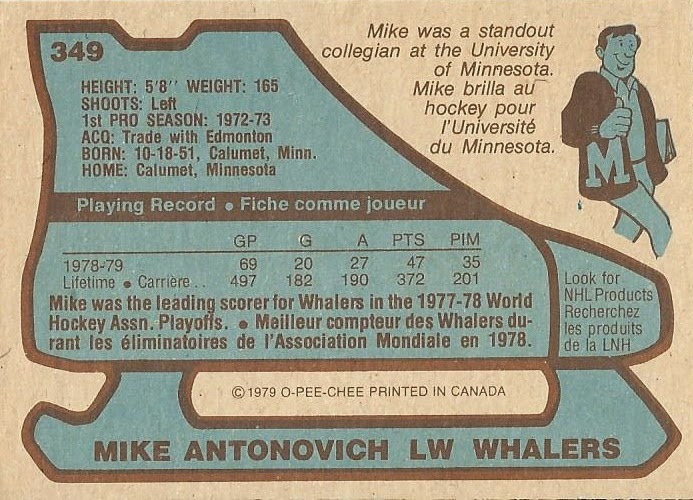 The cartoon on the back is great as Mike, who hails from Minnesota, became a town mayor in the state decades after this card was printed. 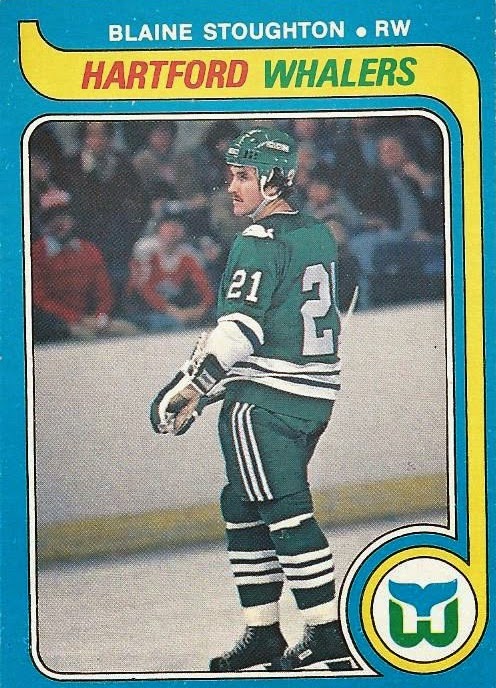 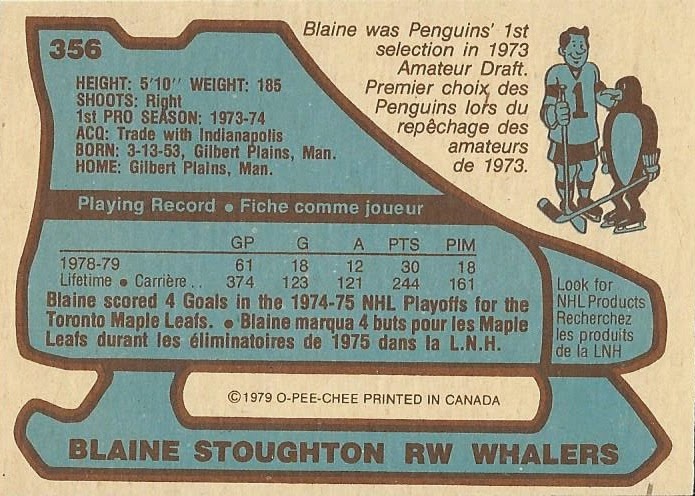 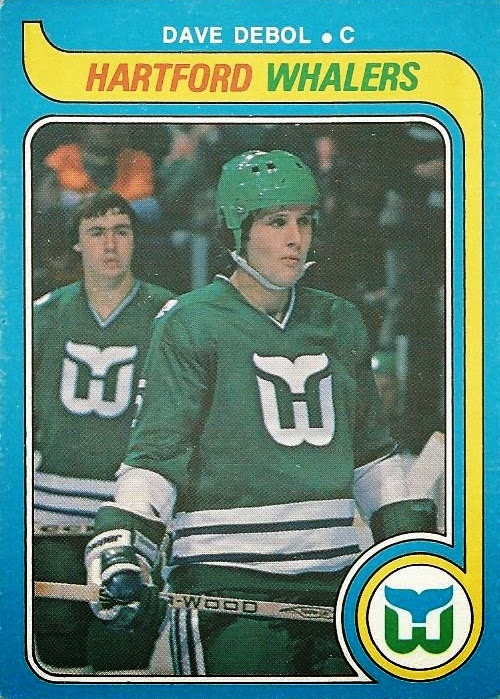 I can now call my Dave Debol collection complete as I have the only two cards released during his playing days. 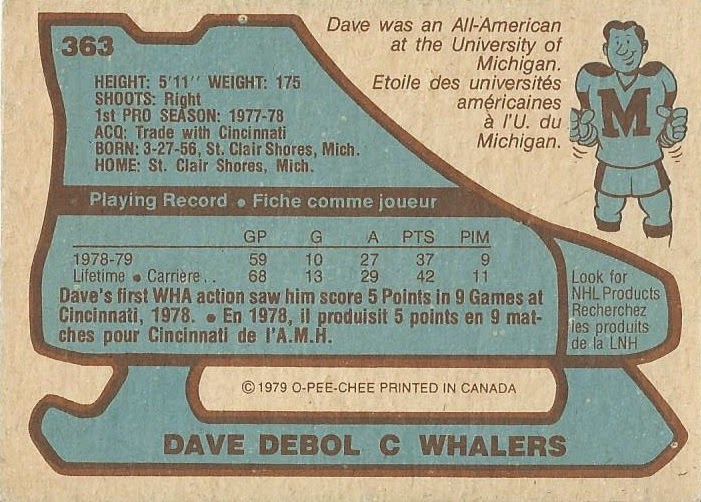 This was a great lot and puts me on the cusp of 1,300 unique Whalers cards.  I enjoyed these so much that I picked up another lot of 10 last week from the same seller, which should be showing up any day now.  Thanks for the heads up Dad!
Posted by shoeboxlegends at 7:51 PM

Can't go wrong for that price!

I remember Hangsleben from his time with the Capitals... I didn't remember that he came from the Whalers. Another card for my wantlist...

I enjoyed reading your commentary. I know almost nothing about hockey so it was all new information to me.

I really enjoy getting obscure players' cards, and it sounds like you got two of them in this lot, can't beat that.