Quick one today, featuring an autograph I finally got around to adding to my Red Sox collection late last year, Jim Piersall: 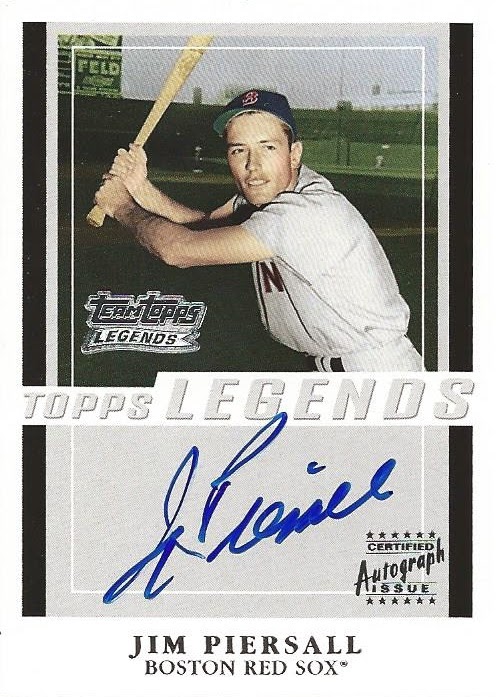 It's really inexcusable that it took me this long to pick up a Piersall autograph, given how reasonably priced they seem to be nowadays ($6 and change for this card).  Jim was a star high school athlete in Connecticut in the mid to late 1940s, and by 1950 was appearing in Major League games with the Boston Red Sox at age 20!

Piersall is most known for basically losing it (mentally) during his true rookie season with the Sox (1952).  There are all kinds of stories out there, most of them true apparently, of Jim going off the deep end; everything from spanking teammates' kids to fistfights with other players.  Eventually he committed himself, got help, and went on to enjoy another 15 solid years at the MLB level.  He would become an All-Star, Gold Glover, and even received MVP votes in more than one season. 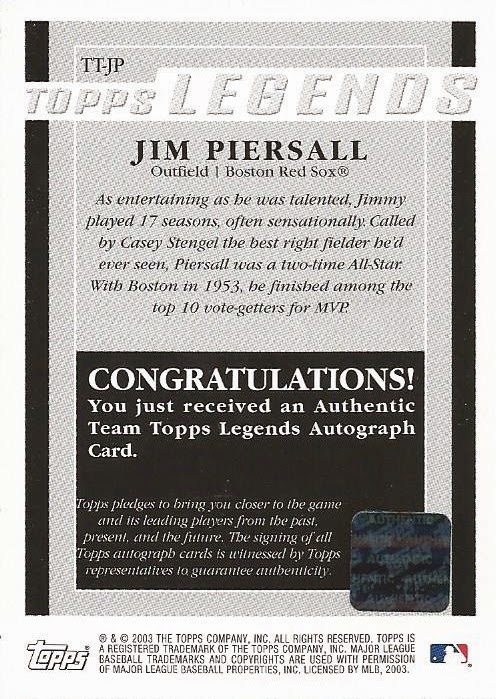 Jim released an autobiography about the ordeal in 1955, titled 'Fear Strkes Out', which I've yet to read.  I'm considering adding it to my reading list though for this year.  Anyone familiar with it?  There's a movie version from 1957 that I've never seen either...
Posted by shoeboxlegends at 11:52 AM

Great card! Piersall has always been one of my favorites.

that is a great card, I may need to add one of his autographs to my collection as well. I have not read his book but heard many of the stories, I think I will add that book to my reading list as well. If you read it we can compare notes.

I'm not a White Sox fan but as a teen Jimmy was paired with Harry Caray on televison doing their games. It was worth tuning in to hear them together. From that era here's a short video of Piersall at a roast for Chicago broadcaster, Tim Weigel.
http://youtu.be/icbpm0Etl-cIf you grew up in Chicago you'll recall Tim's blooper segments called Weigel's Weiners,
http://youtu.be/4HKnKXRZuI4

Wow, re-read my comment. Jimmy was not a teen when he was doing the Sox games. I was.

Beauty of a card. One of these days I'll track down a Piersall auto.

my name is peter sowden i used to live in wilminghton mass, in about 1955 i was at a singing at a market at the head of my street(dirt road) on my hoarse and you came out and asked for a ride and i said yes so you rode my hoarse down the road we knew the permoter and the next day he gave usa autographed pic of you, but the wrong name was on it it was paul, it should have been peter.what are the chances of getting a new one.thanks psowdenelectric@hotmail.com or peter sowden box 300 marion mass, 02738