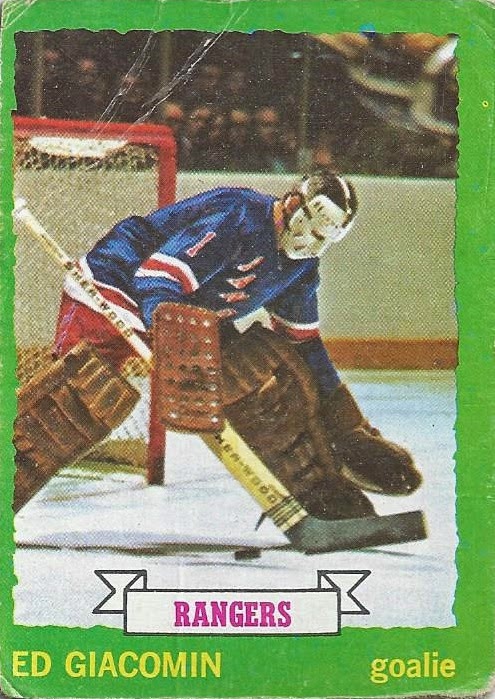 Towards the end of last year (I think), I finally got around to exchanging cards with one of the more well-known traders around the card blogs, Mr. Mark Hoyle.  I'm not sure what took so long, but I'm glad Mark got in touch as he lives right in my neck of the woods!  I sent him a bubble mailer stuffed with extra Red Sox inserts and parallels I had laying around, and in return received an amazing envelope of '70s hockey cards.

The majority of the lot, like the fantastic Ed Giacomin above, came from the 1973-74 Topps set.  I'm trying to complete every Topps hockey set starting with '89-90 and working my way backwards, and this package made a gigantic dent in the '73-74 set in particular.  I've finally gotten around to scanning them all in and adding them to my set binder, but there's no way I can show every card Mark sent in this post.  Instead, here are just some of the amazing cards Mark sent along for my set... 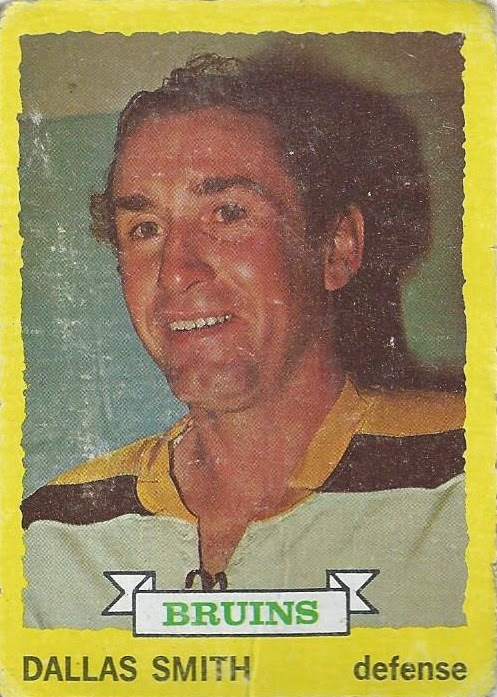 At this point I've gotten far enough back in time to where I don't care much about condition, and will take any card that A) I don't have; or B) is in better condition than the one I do have.  This well-loved Dallas Smith was the former. 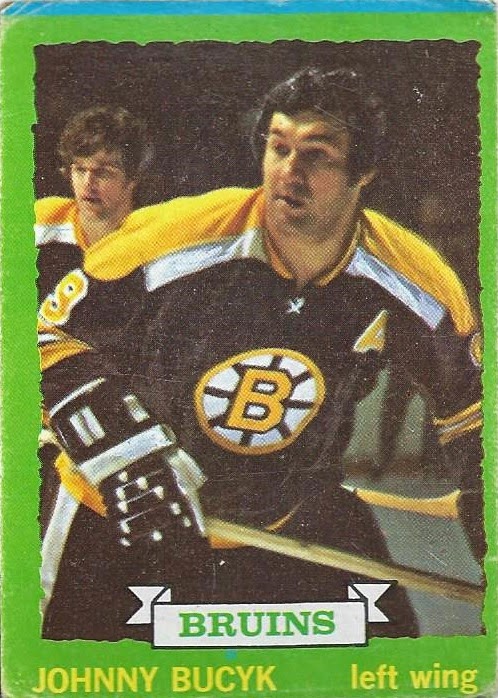 Same for this great Johnny Bucyk, featuring a fairly well-known defenseman in the background.  This card illustrates a relatively common problem with this set, poor cutting that often revealed part of a neighboring card on the printed sheet.  In this case Johnny Bucyk's neighbor to the north had a blue border.  A few of the cards in my set suffer from this, and while I may try to upgrade them someday it doesn't bother me a ton. 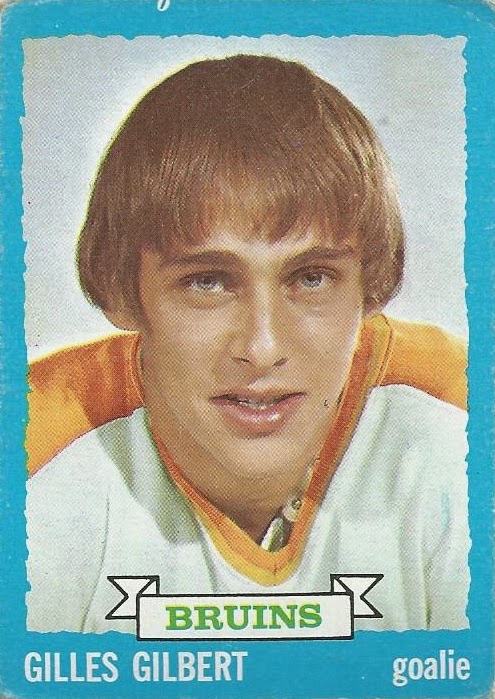 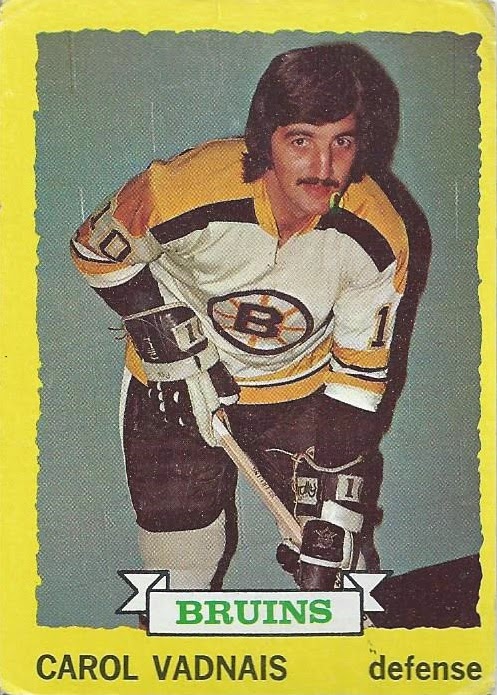 Of course, like any '70s hockey release, you have your share of guys standing around in hallways and/or in front of cement walls. 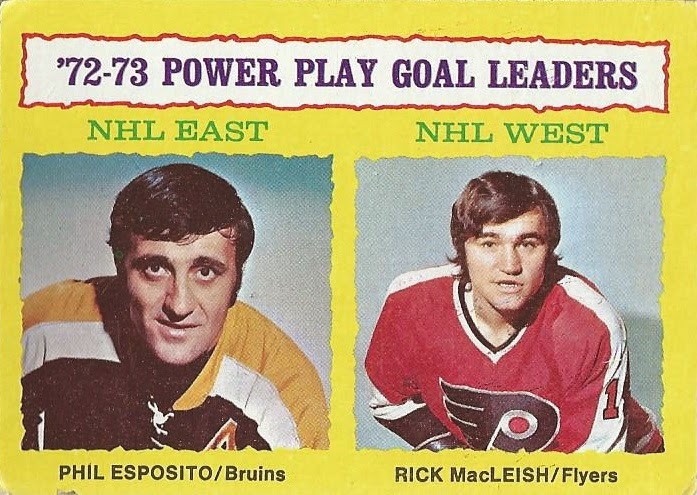 It's not like Mark sent me all scrubs or commons, there were plenty of big name players, and even HOFers, to be found! 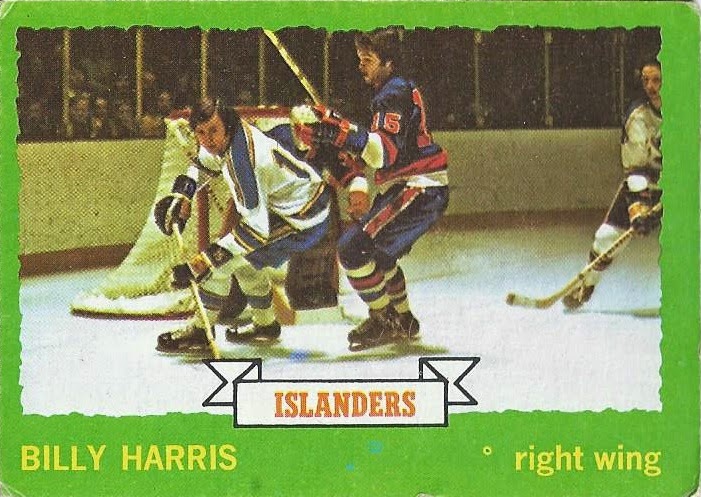 My absolute favorite thing about the '73-74 set are the in-game action shots sprinkled throughout the checklist.  I wish the entire set were like this, love these cards. 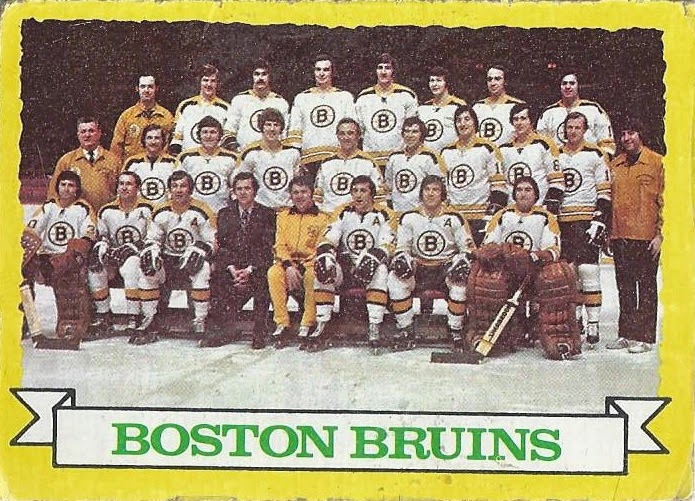 Ditto for the team checklist cards.  Would be cool if Upper Deck would bring this back for even just one set one year.  Although, I'm not sure if teams even sit for a photograph like this any longer? 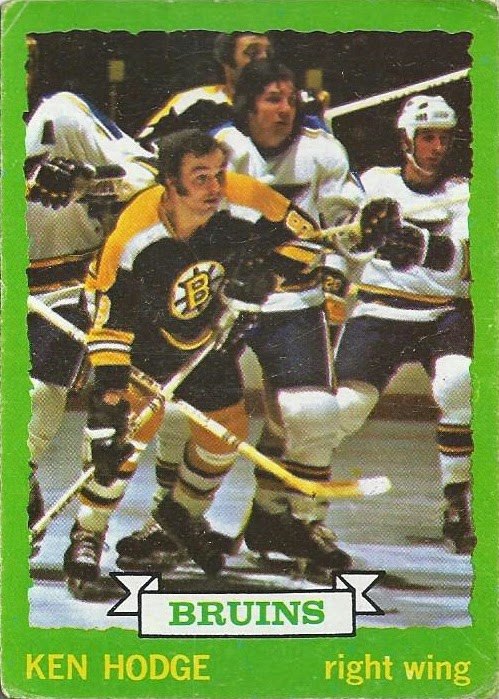 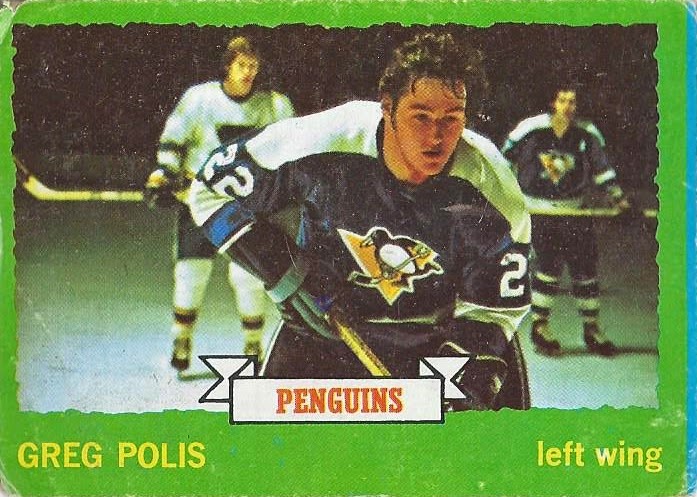 The action photos work best in a horizontal format if you ask me.  I always get a kick out of seeing just how poorly lit the rinks were during this era. 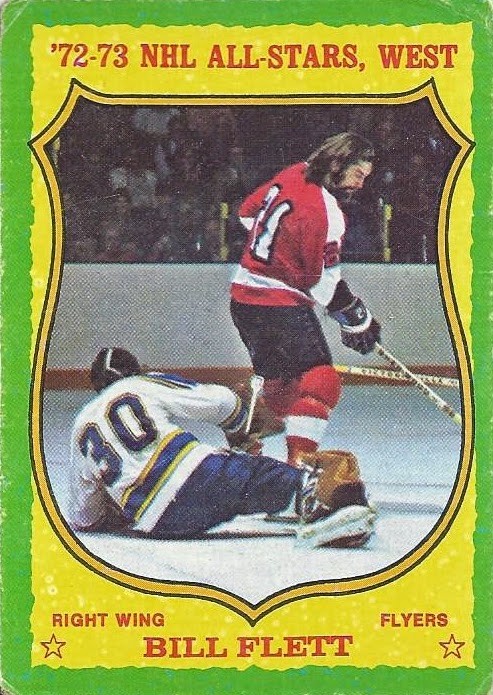 I also love what was done with the All-Star cards for this particular release.  Cropping the photo in the shape of the NHL shield just works. 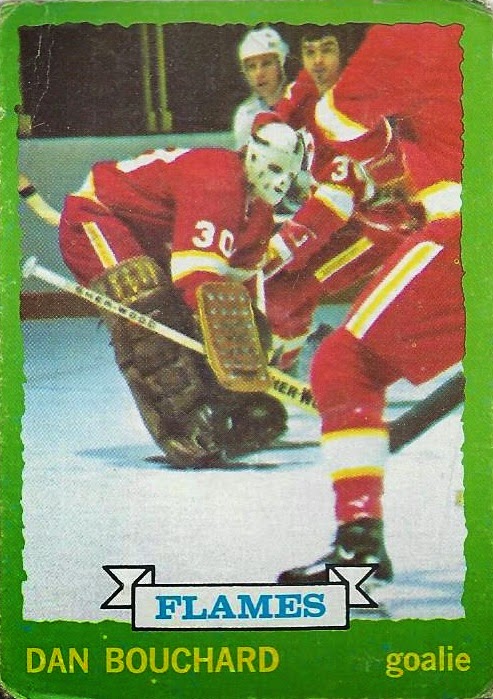 Some of the photographs fall into the "so bad they're good" category.  This one may seem like a blurry, poorly cropped mess, but I like the look at Bouchard's signature mask and wooden Sher-Wood stick. 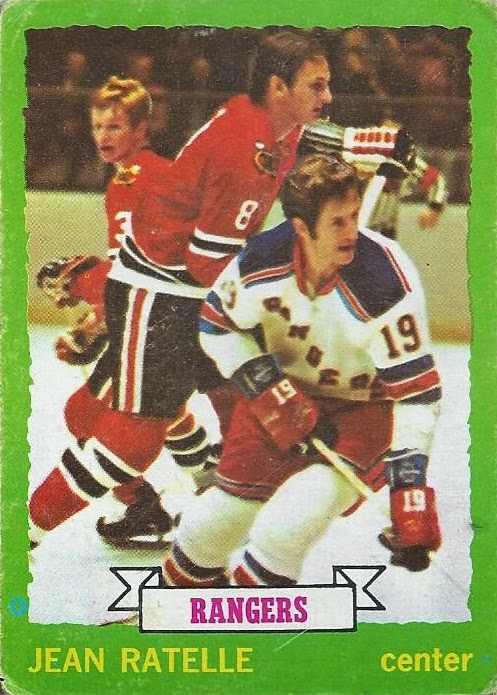 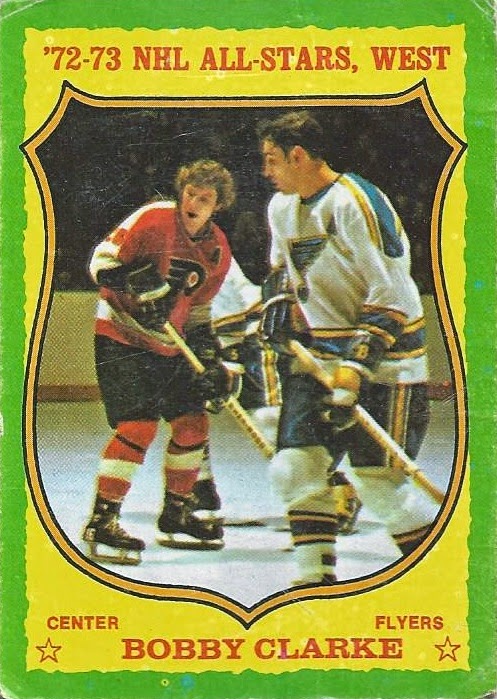 One of my favorite cards in the entire package, always been a fan of Bobby Clarke's. 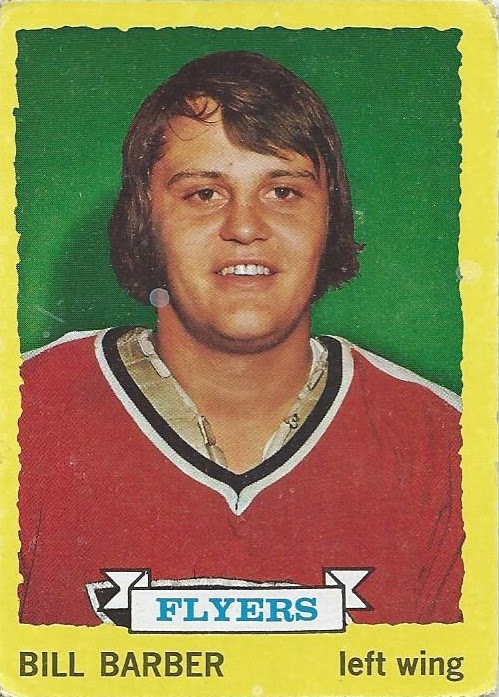 How about a Bill Barber RC?!?!  Do I care that there's a spot on the card that makes it look as though Bill's wearing a pearl earring?  Not in the least. 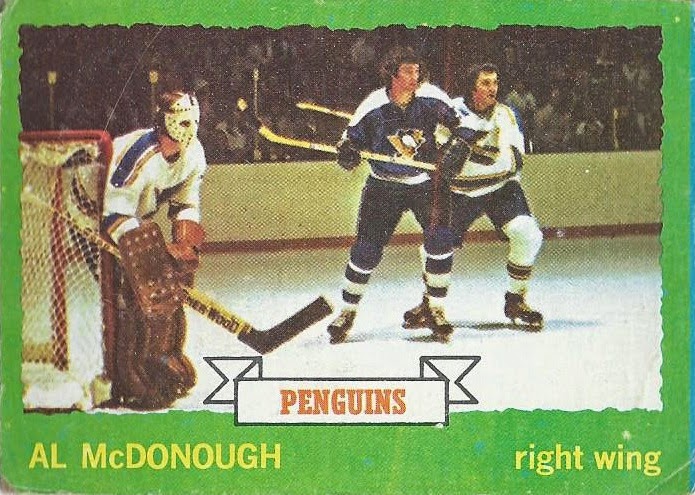 A better example of a more carefully chosen in-game photograph.  I love how this one is framed.  Just a lowly common, but probably one of my favorite 20 cards in the entire set. 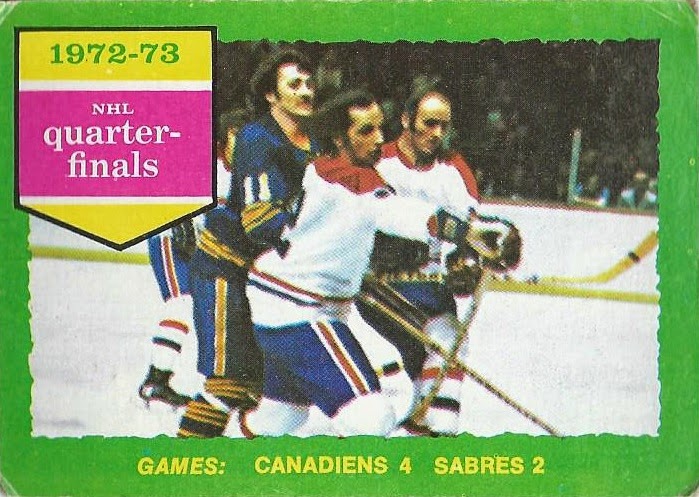 Towards the end of the checklist are some cards that summarize the previous season's playoff matchups. 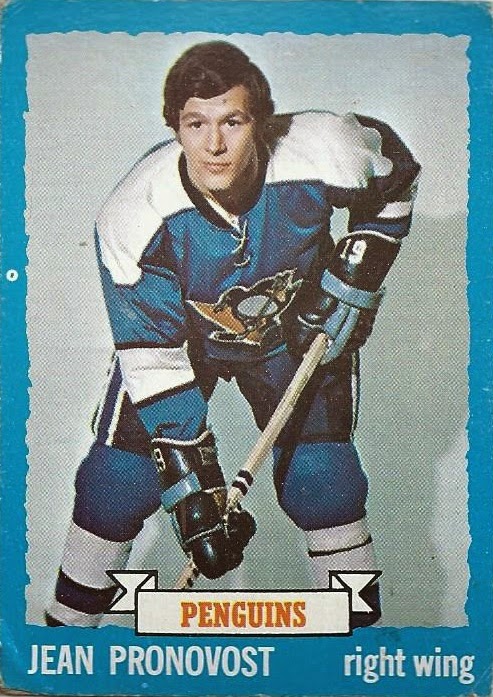 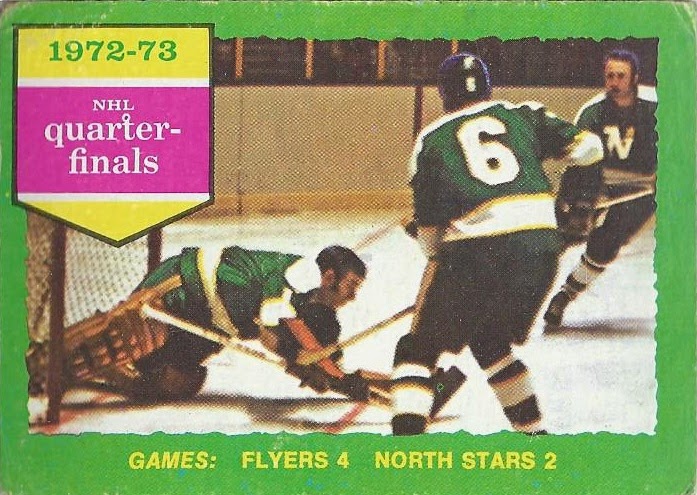 Yes that is a helmet-less Gump Worsley minding the net! 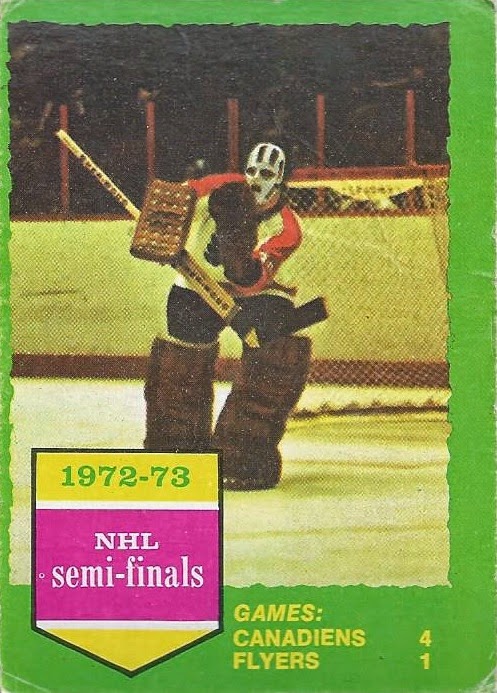 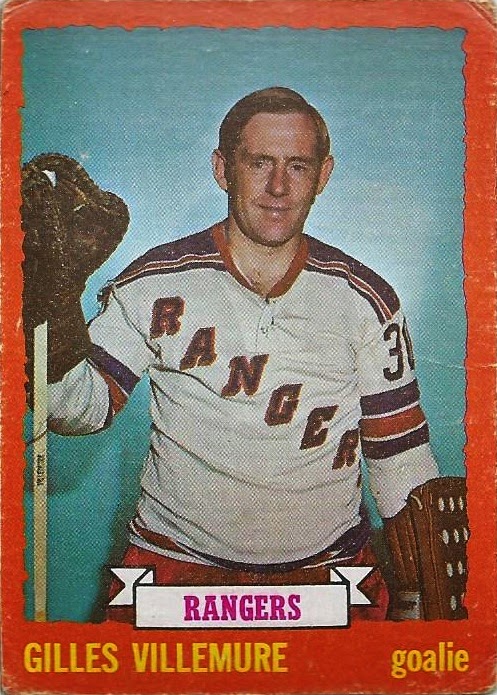 Most of the portrait shots are boring to me compared to the game action photos, but every once in a while I stumble across one I really enjoy. 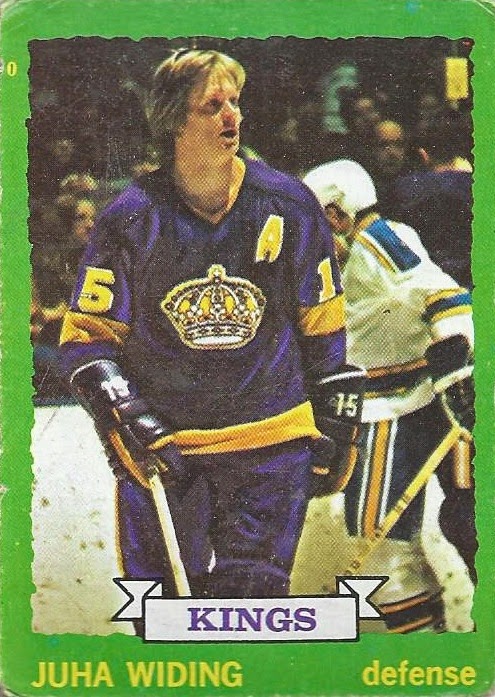 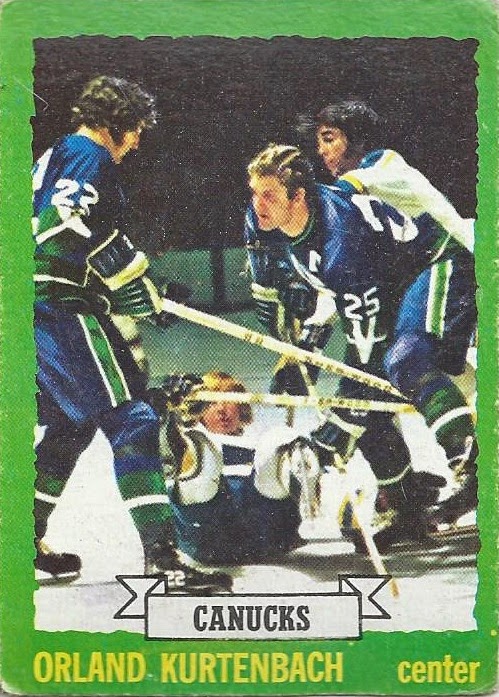 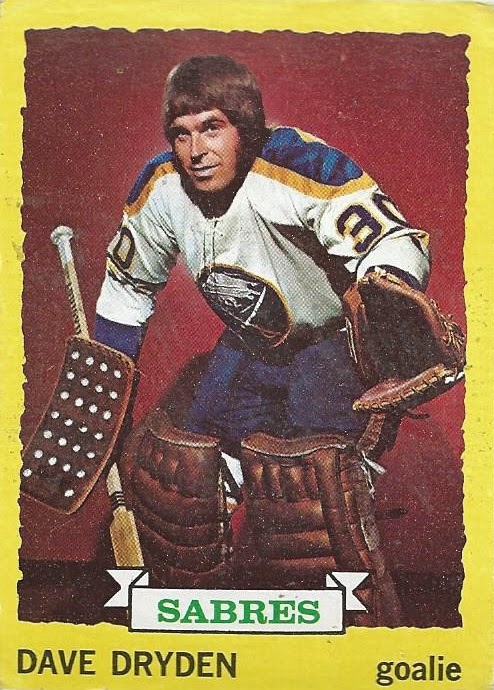 Sweet a Dryden!  Not Ken, but still a Dryden... Topps knew how to close out a checklist, as this beauty represents the final card in the '73-74 set.  I've often thought about starting a mini-collection of all cards featuring actual photographs of the Stanley Cup.  This is one of the better ones out there, even in black and white!  This envelope leaves me at less than 60 cards to go to complete this set.  Even with some of the bigger names left (Orr, Esposito, Dryden, Lafleur), I should be able to knock this one off in 2015 if I stay focused. 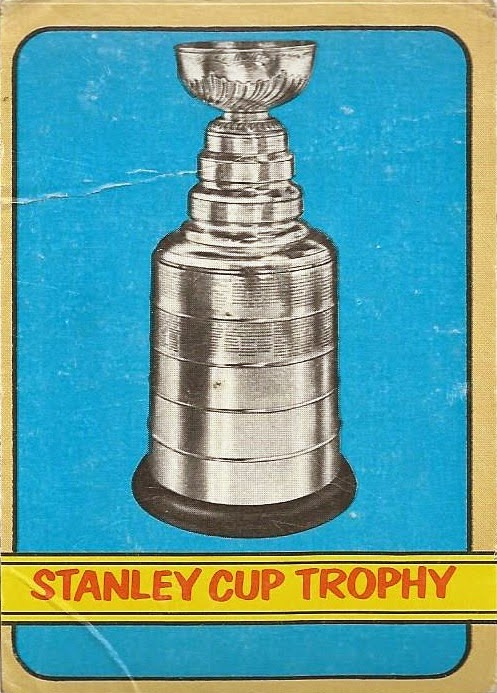 Here's another!  Mark also included a stack of cards from the previous year's set as well.  '72-73 Topps featured cards on the checklist for the major trophies.  Most are featured at the back end of the checklist, but the Stanley Cup card depicted here is towards the beginning, right after the cards that summarize the Bruins' winning Stanley Cup run. 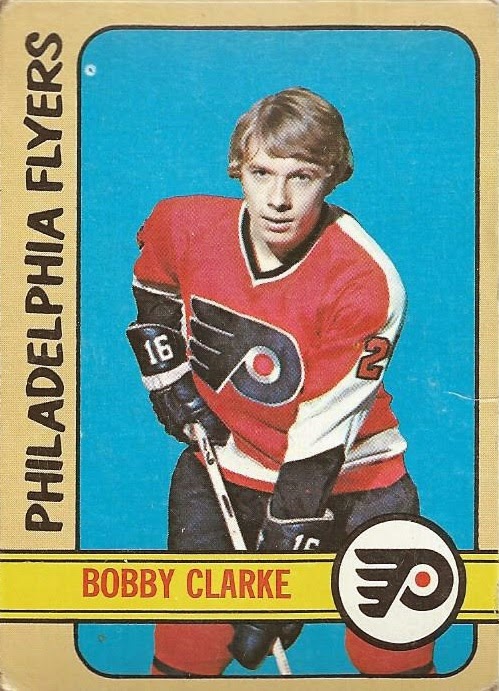 This early-career Bobby Clarke is probably my single favorite card from the entire envelope.  This is Bobby's first Topps card, with his formal RC coming in the previous season's OPC set.  Just awesome! 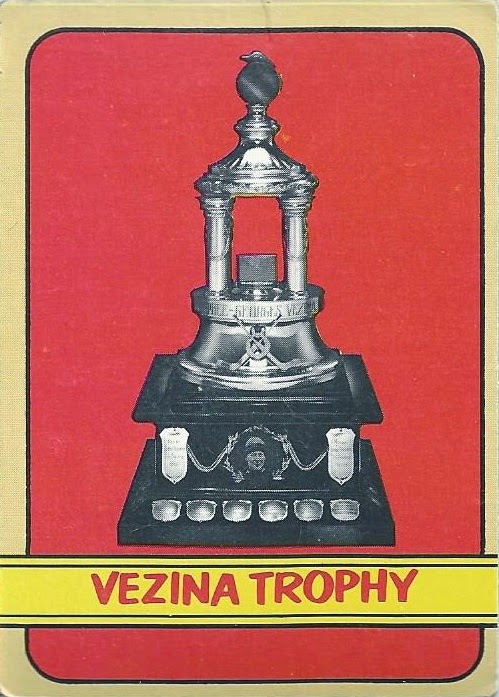 Here's a look at one of the other trophy cards; the Vezina! 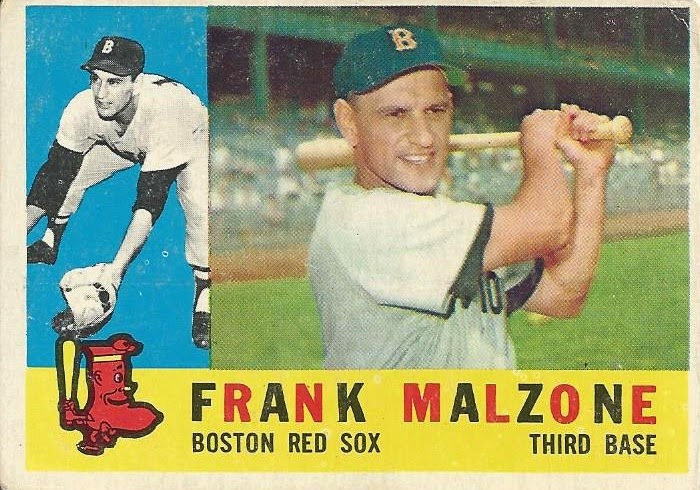 Last but not least, Mark was kind enough to throw in a Red Sox card as well in the form of this great '60 Topps Frank Malzone.

Mark, thank you for the awesome cards!  I'm sorry it took me so long to post this, but it was only due to the sheer number of cards you sent over that had to be scanned and sorted.  I really appreciate the trade, and I've already got my next bubble mailer started for you!
Posted by shoeboxlegends at 12:09 PM

I love that Polis card. Mark is the man!

So many awesome cards! I was getting ready to comment on each one, but it got to be too much... suffice to say that I ended up switching back and forth between this post and the wantlist I kept updating.

I wonder what jersey Gilles Gilbert is wearing. It's sure not a Bruins jersey, nor any of the other NHL teams he played for.

Thanks, that's how I felt looking through the package! Mark has officially gotten me off my butt to try finishing this set this year.

I have a nice Lafleur, Espo, Perrault I can send your way. I can probably finish off your set.

Thanks Mark! I've got a few cards set aside for you, will try to find some more this weekend to make it worth shipping out...