Catching Up with Joe Shlabotnik

For your enjoyment today I have the contents of a great bubble mailer that I received from my buddy Joe Shlabotnik of The Shlabotnik Report this past summer.  Yes, I am still catching up on trade packages that came in over the summer.  I'm not proud of it, but that's where I'm at.  Let's dive in! 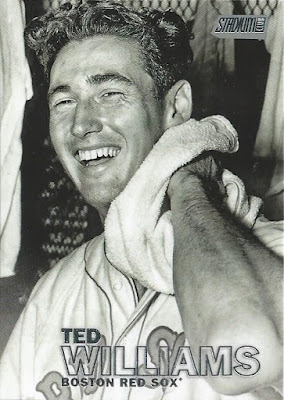 This fantastic Ted Williams card is possibly my favorite in the entire package.  I have a decent chunk of 2016 Stadium Club cards but hadn't managed to get my mitts on this one until Joe's delivery arrived.  Just awesome.  I'm not sure I've seen this image ever used on another piece of cardboard. 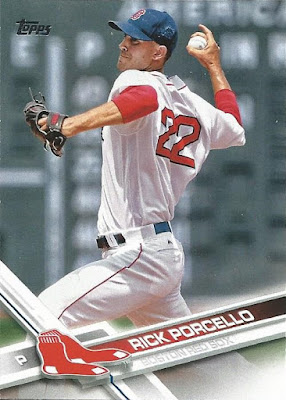 There were a nice smattering of recent Red Sox cards to be found, including a pair from the 2017 Topps flagship set in Rick Porcello... 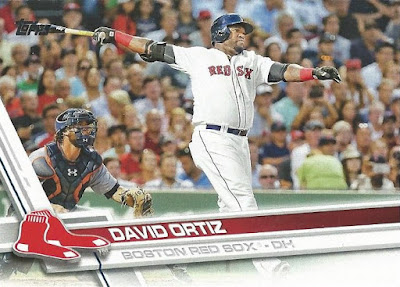 ...and a David Ortiz "sunset" card.  I think Topps made something like half a dozen different photo variations of this particular card, which is just silly if you ask me.  While the 2017 flagship set isn't exactly my favorite design in recent years, I do feel somewhat compelled to complete a flagship team set each season so these are much appreciated. 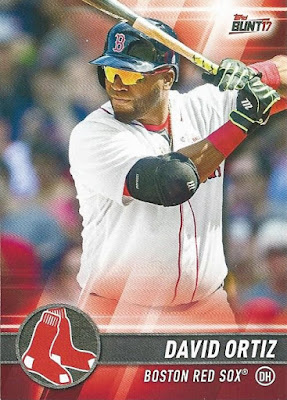 Speaking of Ortiz, here's a Bunt issue from this year.  For a guy who wrapped up his career in 2016, Big Papi sure does show up in a lot of 2017 sets. 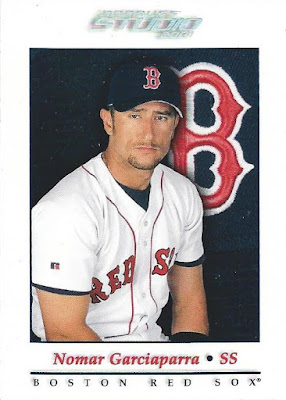 The oldest baseball card in the package was this 2001 Donruss Studio Nomar.  Baseball cards were about the furthest thing from my mind in 2001, so I'd actually never seen this set in person before receiving this. 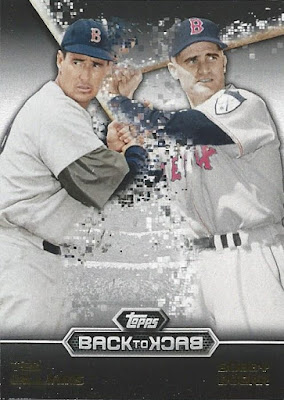 How about a couple of inserts?  From the 2016 flagship set here's a "Back to Back" insert featuring two of the better hitters in Red Sox franchise history... 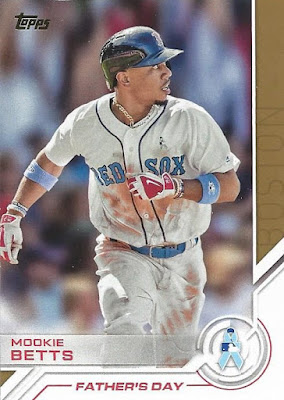 ...and from the 2017 flagship set a guy who hopes to someday join those ranks! 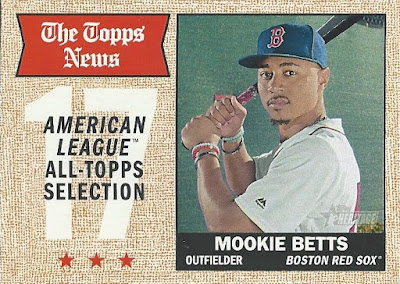 My Mookie Betts count went up by two courtesy of this bubble mailer.  I've really been staying away from the card aisle in Target here in 2017, preferring to use my hobby funds on individual singles and COMC binges, but thanks to the many friendly people in our awesome community you'd never know that looking through my collection. 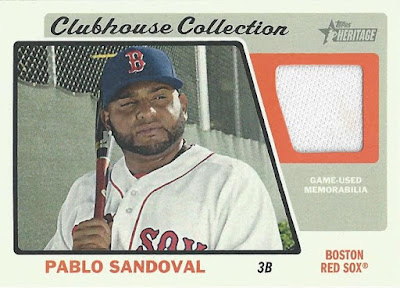 Typically Joe and I exchange PWEs, however he noted that he used this bubble mailer as an opportunity to send a couple of items that aren't very PWE-friendly my way.  The first is this Heritage relic of a player I'm sure many Sox fans would like to forget, the Panda.  I like my collection to be a historical recollection of the sport though, good and bad, so I happily welcome this one. 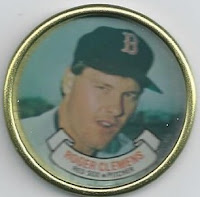 The other item that would be tough to get into a PWE is this 1987 Topps Coins Roger Clemens.  Probably should have taken a photograph of this as opposed to a scan as it's a bit blurry, but I'm sure you've all seen these before anyway.  A unique Red Sox item that went right into the oddball drawer in my desk. 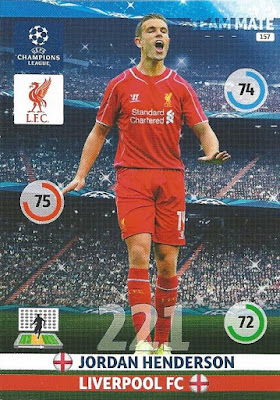 All of those great Sox cards would have been enough, but Joe didn't stop there.  He's one of the few bloggers I know with at least a mild interest in soccer cards, and he bestowed a few nice ones upon me. 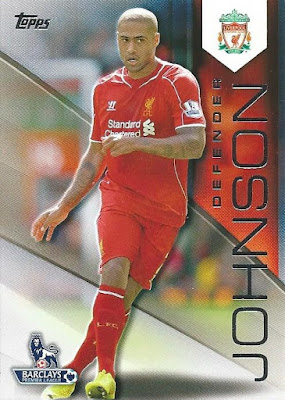 The first few are cards of my personal favorite club, Liverpool. 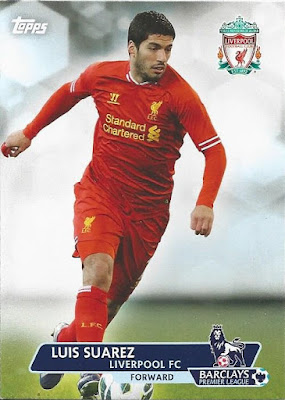 I really like this one, because Suarez was the man for the Reds right around the time that I really started getting heavily into the English Premier League.  In fact, this 2013 Topps Premier League Gold set is one of the first soccer sets that I can remember acquiring quite a few cards from. 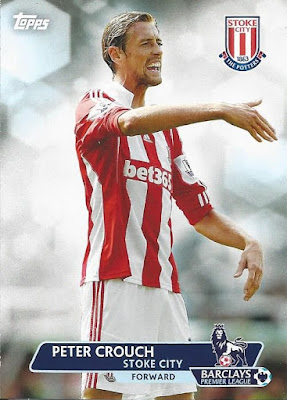 Actually, to that end, Joe hooked me up with a nice little stack of them! 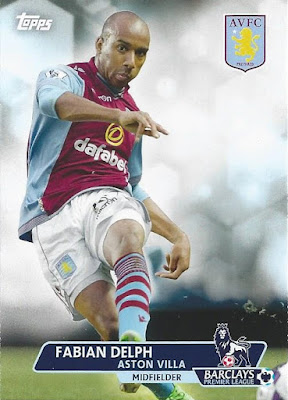 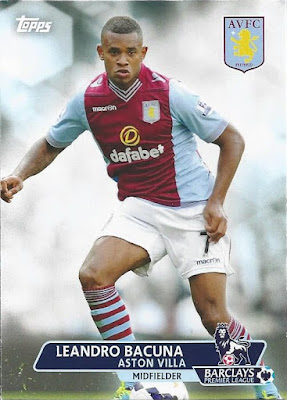 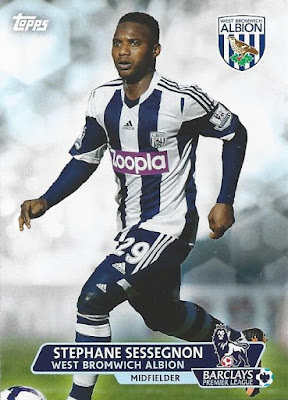 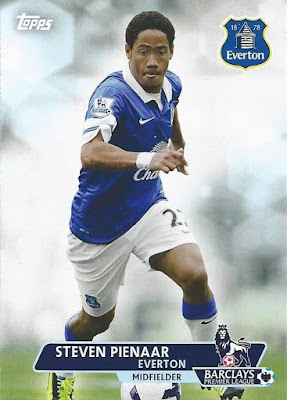 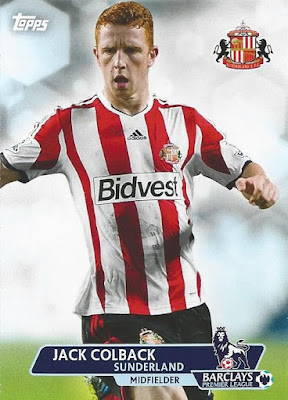 I'm still working on transitioning my soccer collection into The Trading Card Database so I can't say for sure at this point, but I bet with these seven in hand I'm probably close to halfway to the 200-card base set.  Maybe something I can wrap up on the cheap over this coming winter.

Finally, there were also a pair of Topps buybacks to be found!  I'm eternally grateful to the folks who have shipped me buybacks for my franken-set project over the last couple of years.  This isn't the first time Joe has done so, nor the last!  Let's see how the two that he sent along fared in terms of franken-set induction... 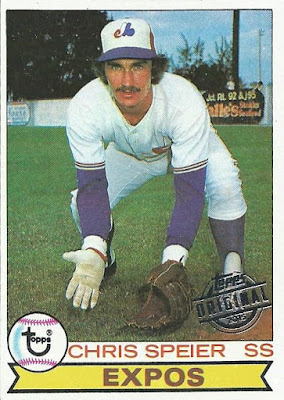 A nice Spring Training shot on this '79 Chris Speier.  Must have been a bit chilly wherever this photograph was taken, as Chris is sporting long sleeves under his uniform, and a batting glove on his non-glove hand.  The binder was lacking a #426 buyback, so this one was a home run and makes the set by default. 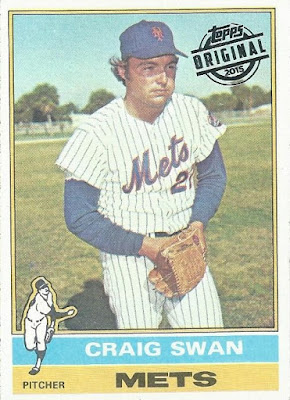 The other buyback that Joe sent along with this delivery was this '76 Craig Swan.  I'm extra grateful that Joe was willing to give this one up, being a Mets fan and all.  Craig actually pitched well for New York as a starter in 1976, but ended up with a poor record presumably due to a lack of run support. 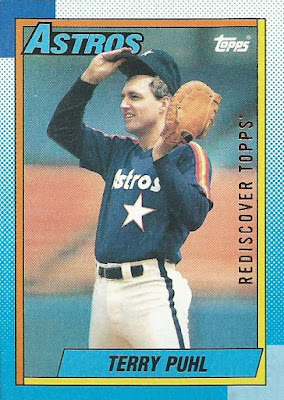 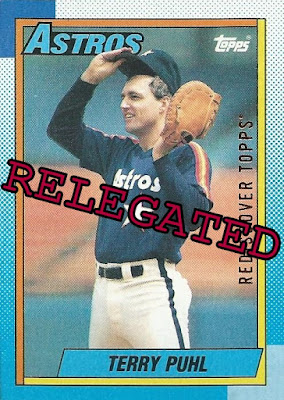 Craig Swan goes into the franken-set, and Terry Puhl gets relegated to my newly formed 1990 Topps buyback set binder!  That's the definition of a win/win right there.

It actually took me so long to get these posted that Joe has already hit me up with another PWE in the interim.  The good news is that I shouldn't be as far behind with that one, as I already have it scanned and you should see it here this coming week.  Thanks Joe for another great batch of cardboard, and thanks everyone else for stopping by and spending a few minutes of your Saturday here at Shoebox Legends!

Great Sox cards! I need to get some of those newer David Ortiz cards for my own PC.

That 2017 Topps Sunset card of Ortiz is fantastic! Gonna grab a refractor for my binder.

At the risk of damaging any "selfless" reputation I may be establishing, I honestly didn't think of the Craig Swan as a "Mets buyback". You enjoy buybacks far more than I do, so any I get go in the "Shoebox pile".