I'll never turn down a '50s Bowman card, and if I won the lottery or otherwise had an unlimited collecting budget I'd love to track down each and every one.  Until that day comes though, I'm satisfied with plucking some cheap ones off of eBay from time to time.

A while back I started officially tallying and dedicating a post to each card I land from the 1950 set, and today I've got the 11th post along those lines, featuring Jimmy Russell of the Brooklyn Dodgers! 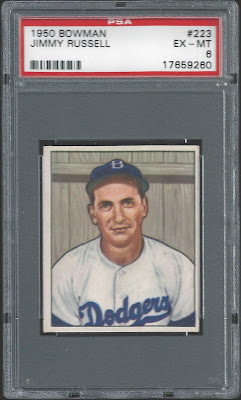 As far as pure aesthetics go, the plain wooden fence isn't the most exciting background you'll find in this beautiful set, but it's a nice enough card anyway.  I mean, is there even such a thing as an unattractive '50 Brooklyn Dodgers card?  I don't think I've ever encountered one!  Of my small collection of 1950 Bowman, this is actually my first Dodger, which is pretty cool.

I picked this card up a few years ago in graded format only because it was dirt cheap, cheaper even than I could find any decent-condition ungraded copies for.  Some day though I'll look to get rid of this and pick up an ungraded version, or maybe even crack it free from its plastic prison.  If and when I land any HOFers or big stars from this release I'd consider graded, but at this point in my collecting career I prefer raw cards at least for the commons. 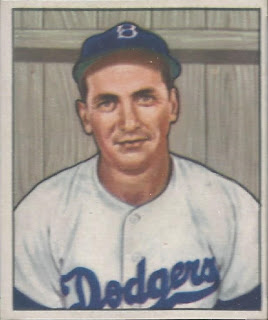 Here's a better look at Jimmy, sans plastic slab.  Russell actually began his MLB career all the way back in 1942 with the Pirates, and was winding down at the Major League level by the time he found his way to Brooklyn.  The 1950 and 1951 seasons that the Pennsylvania native spent with the Dodgers wound up being the final seasons of his Major League career.  After he hung up the spikes, he spent well over a decade as a scout for both the Dodgers and the Senators. 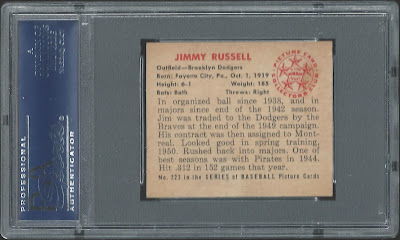 Here's a look at the back, unblemished for the most part... 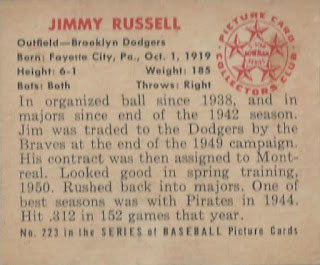 ...and here's a better look for anyone who might want to read the summary.

A 1950 Bowman was the very first vintage baseball card I ever owned, as probably an 8 or 9 year old when my dad bought me one at an antiques store near where we lived.  I've loved the set ever since, and I enjoy the new cards I pick up from this release almost 30 years later every bit as much as I did that first one.  I may never own them all, but you can bet you'll be seeing at least a few more of these on the blog in the future.

Enjoy your Wednesday, and thanks for stopping by!

I actually like the wood fence in the background. Gives the card some character.