I'm away on Cape Cod this weekend getting some badly needed R & R before a major work project kicks up for a few weeks.  If all has gone according to plan I'm aboard a small center-console boat right now, with an airplane spotter, chasing Great White sharks around the Cape!  Yes, for real. 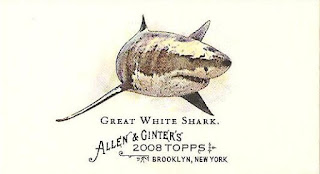 Done in the same style as the standard Allen & Ginter minis from 2008, this 5-card set pays homage to some of the top predators in the ocean.  Of course, the infamous Great White leads off the checklist.  I've been simultaneously terrified and fascinated by these deadly fish since I was a child, and it's pretty great to have them represented in cardboard format in my collection. 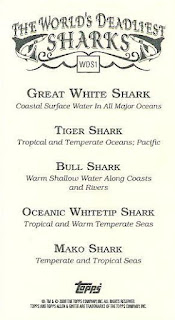 Here's a look at the back, which is essentially just a checklist for the five sharks in the set.  Because of that, I won't bother with a scan of the back for all five of these here. 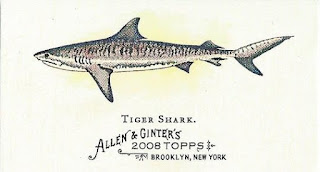 As with the baseball set that these were inserted in, I like that the border-less design really let's the image itself be the star of the show. 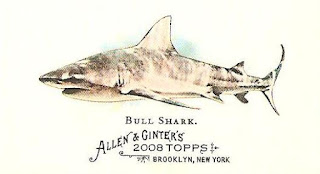 These were very tough pulls back in 2008 when the Allen & Ginter set hit shelves.  I pulled this Bull Shark card from a pack back in 2009, and have since added the others individually to complete the set (with the final piece coming back in 2017). 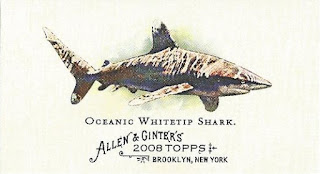 Just how rare are these?  Well, I can't find stated odds anywhere for pulling these, but prices on the secondary market indicate they're scarce and in demand more than a decade after release.  I don't see even one complete 5-card set available on eBay, and picking up each of them at current asking prices on COMC would set you back more than $35 in total. 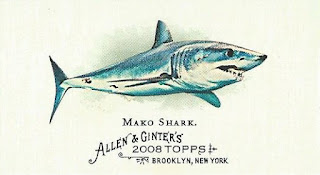 So there you have it, 2008 Allen & Ginter's The World's Deadliest Sharks!  My favorite A & G mini set to date, and a cool little niche piece in my collection overall.

What's your favorite A & G mini insert set to date?  Have you completed it, and if so was it a bear?  I'd love to hear about it in the comments.

I'll be back later this week with more content, assuming I didn't fall off the boat!
Posted by shoeboxlegends at 11:30 AM

Those are awesome! Congrats.

My favorite A&G minis are the Giants of the Deep (whales) from 2012 and the glow-in-the-dark constellation minis from a couple years ago.

Great looking set. My buddy just came back from Hawaii and was telling me how he swam (in a cage) with Mako sharks.

Cool little set, for sure. As for a favorite, I thought the World's Dudes set was pretty good (and funny).

I'm not a huge shark fan...I like the San Jose sharks and I like Hammerheads, that's about it! There are a ton of sharks at the New York aquarium on Coney Island...I'd say roughly 60% of the entire place.