I've got the next three additions to the baseball keepers collection, and unlike the first half dozen entrants one of these has never seen the light of day here on the blog before.  Today's post is all about the great Mickey Mantle! 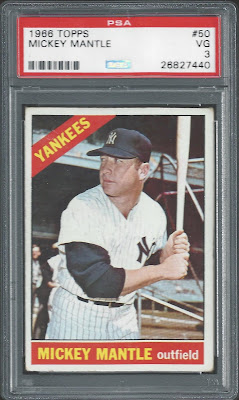 Owning a playing-era Mickey Mantle card seems almost like a rite of passage for baseball card collectors who specialize in vintage, at least in some circles.  I've wanted one quite literally since I was a kid, and I can remember drooling over the handful of vintage Mantles that my childhood friend's father owned way back in the early '90s.

Well, I made it all the way to my mid-30s without crossing that goal off of my collecting bucket list.  Late in 2018 I finally bit the bullet though, and picked up this '66 Topps example.  It still makes me smile when I look at it, coming up on a year later.  In fact, I liked it so much that I think I got the itch. 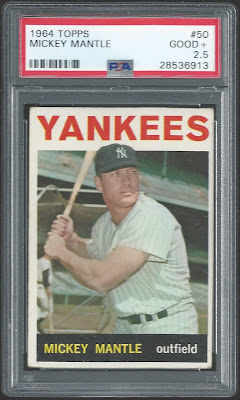 Shortly after featuring the '66 Mantle, I used an eBay gift card I received for Christmas to take about half of the sting out of this beautiful '64.  I like this one even better than the first, and could now say that I owned a pair of Mantle cards proper.

Each of those two cards has received a post here on the blog over the last few months.  I actually have a third 1960s Mantle though, acquired after that initial pair gave me the taste.  I'm especially pleased with and proud of this one.  The pair has now become a trio...behold! 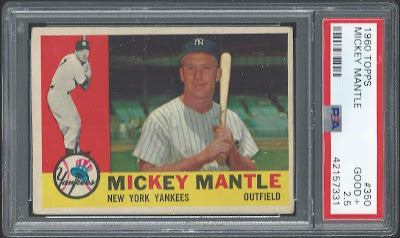 Oh yeah!  Quite possibly my best card from the '60s, period.  I love the look of Mantle on one of the most unique and easily-recognizable designs of the decade.  Just classic.

As with my first two Mantle cards, the low grade allowed me to nag this otherwise unattainable card.  I assume this one received a "Good 2.5" from the folks at PSA primarily based on the soft upper left corner, but it sure feels criminally under-graded to me.  I have a feeling this card would have actually fetched more at auction raw than it did in this holder, but that's fine with me.  A vibrant and visually appealing card if you ask this collector! 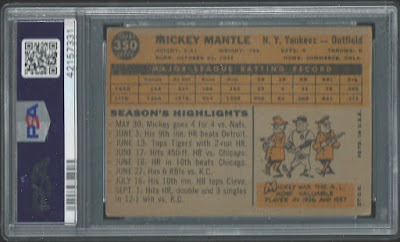 My scanner struggles with PSA slab backs, but you get the picture.  Nice clean back, no paper loss or anything nasty.  Works for me.

So that's how I went from zero proper playing-era Mantle cards to three, all within a year.  I'd love to augment these with a Topps Mantle from the '50s as my next goal.  1959 in particular would be killer since I'm working on that set, but no luck there yet.

For now, I'm selecting all three of these cards for my baseball keepers collection.  That's 9 cards down in that collection altogether now, 991 to go.  You can see the virtual album here if you're interested.

I'll be back with more keepers soon, in the meantime thanks for stopping by!
Posted by shoeboxlegends at 10:00 AM

Wow. That's a great trio of Mantles. Obviously I'd welcome any 60's Mantle into my collection, but the 1960 Topps is definitely one of my favorites from the decade.

Nice! Your three vintage Mantles beats my two ('67 & '69). One day I hope to find an affordable (see: heavily beat-up) copy of an earlier '60s Mick at a show or something.

I've got two vintage Mantles, but they're both oddballs (1964 Giants, 1968 Game). I certainly wouldn't mind adding any of these to my collection, though...

I don't remember if I said this before, but this is a fun series; kinda wish I'd thought of it. :-D

Matt, never really noticed that before either, thanks for pointing it out!

Joe S, I'd love to see you do the same or a similar series on your blog! You were actually part of the inspiration for the series, as I kind of view it as somewhat similar to your desert island '80s binder, just encompassing my entire collection.