Back in July I made a decision that, in furthering my ongoing efforts to condense my collection, I would start selling off some items that didn't fit my present-day collecting tastes or interests too well.  I shared the first half-dozen sales last month, and today I've got another batch of cards to officially say au revoir to! 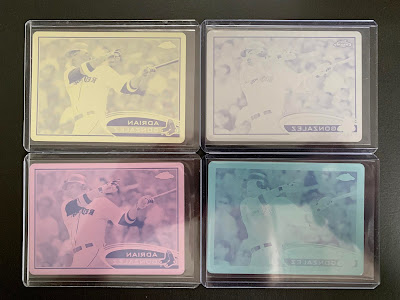 There was a brief period in time, before Xander Bogaerts, where Adrian Gonzalez was my favorite Red Sox player.  I kind of went nuts for a while picking up his 2011 and 2012 releases, where he was depicted with Boston.  The set I collected hardest was 2012 Topps Chrome, eventually completing a rainbow that was missing the 1/1 "Super-Fractor" card, but did have all four printing plates!

Well, these days I'm not a big Adrian Gonzalez guy, and while printing plates are cool and all, these just weren't bringing me a whole lot of enjoyment.  When I was contacted on TCDB by a 2012 Topps Chrome mega-collector, I offered him all four for $50 flat.  Sold!

I'm glad they went to a great home; this guy's 2012 Topps Chrome collection is insane.  He's already completed the base and autograph versions of the base set, refractor set, orange, purple, blue, black, sepia and gold refractor sets, and is just a few cards away from red and atomic refractor complete sets as well.  He's also got a ton of printing plates and super-fractors.  Quite literally, there is probably no place on the planet where these belonged more than with this guy, and I pocked $50 from the transaction.  Win/win! 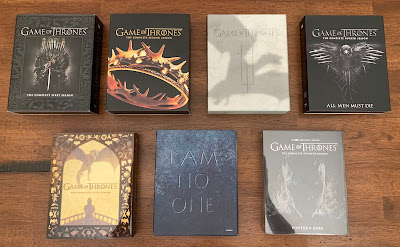 Here's my one non-card-related sale so far, included just because I had a picture mixed in with the others here.  Like many, I really enjoyed HBO's Game of Thrones show, but now that it's over I don't really need my seasons 1-7 in blu-ray format any longer.  Especially not since I already redeemed the digital copies that came with these, and so still have access if I care to watch them again.  I scored $55 for this lot! 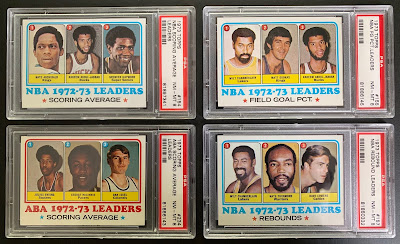 When I re-entered the hobby way back in 2007 I was fairly all over the map in terms of what I purchased.  At some point I snagged these 1973-74 Topps NBA & ABA Leaders cards.  I think I was just enamored with the fact that I could bring home names like Dr. J, Wilt Chamberlain, and Kareem Abdul-Jabbar for just a few bucks.  Looks like I paid $6 each for these back in November of 2007.

I sold them as a lot of four, and accepted an offer of $43, so I guess I made a few bucks on these over the time I held them, although that was not my intent. 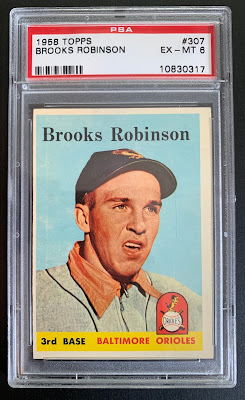 Alright, these next couple weren't that easy to part with, but hear me out.  Back when I first returned to collecting, I cared way too much about obtaining graded vintage in a particular grade.  It was a total OCD thing, but any card from the '50s I wanted in a PSA 6, the '60s and PSA 7, the '70s a PSA 8, and so on.

The thing is, I sometimes paid more attention to the grade than the card itself (hey, we've all done things we're not proud of in this hobby, right?).  That was certainly the case here, and whenever I looked at this second-year Brooks Robinson within the past couple of years it just drove me nuts how off-center it is.  How in the world did this not get the 'OC' off-center designation from PSA? 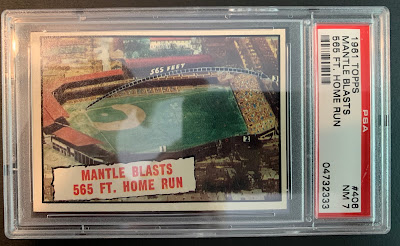 For the longest time, this card from 1961 Topps that pays homage to Mantle's legendary "565-ft" home run was the closest thing I had to a "playing era Mantle" card.  I was able to secure a couple of better Mantle cards beginning late last year though, making this one pretty expendable in my eyes.  Certainly expendable enough to accept a $66 offer for it! 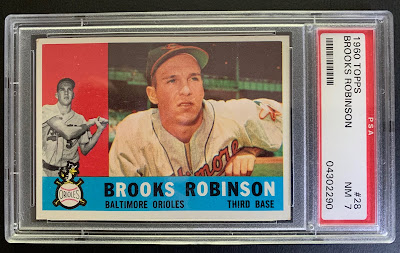 This one was maybe the toughest call in today's post, because I really do like Brooks Robinson and it's a nice looking example of his '60 Topps card.  I'm not looking to complete this set any time soon though, and as silly as it may sound the super old PSA label was driving me kinda nuts.  I gladly took $70 for this card, and moved on. 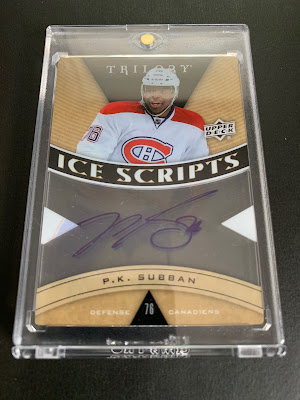 Next, with hockey season right around the corner I decided to part with a couple of on-card autographs.  I still enjoy autographed cards (and in fact plan to revive my Signature Sundays posts this fall!), but this PK Subban didn't really fit into my collection.  I grabbed it because he's one of the most exciting defensemen in the NHL, because I love acetate cards generally speaking, and because I got a really good deal on it.  It's in a better home now though after it fetched $16 on eBay. 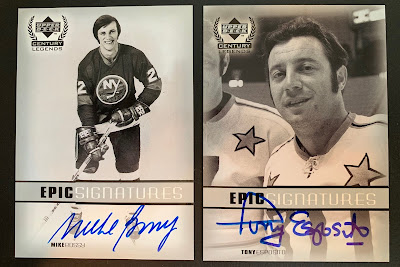 Final sale I'll cover today was for these two big-name HOFers.  While these are on-card autographs, and quite striking in blue ink against a sepia photograph, they're not my favorite autographs of either of these two players.  With a few exceptions (Hartford Whalers and one or two autographed sets I chase) on the hockey side, I don't typically need more than one autograph of any player.  These aren't exactly in-demand autographs, so I paired these up in one auction and accepted $18 for the two.  I might've been able to hold out for more, but I'm really trying to purge here, and the offer was good enough.

Even after eBay fees I still cleared well over $300 in profit from these cards alone, further motivating me to continue my selling spree.  Most of that money went to savings, but I haven't altogether given up on picking up new cards either, and used a small percentage of what I made to add to my collection.

On that note, here are a handful of new cards I've picked up recently! 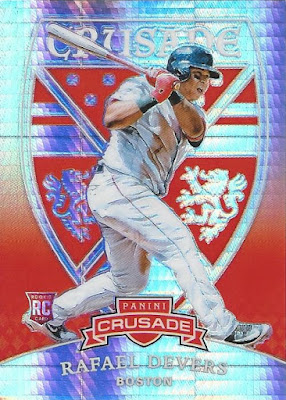 Rafael Devers has cooled off a bit in the past couple of weeks, but I'm still having a lot of fun picking up cards of the exciting 22-year-old slugger.  This Hyper Prizm parallel of his Crusade RC from Panini Chronicles (#'d /299) was a cheap score at $2.00 with 99 cents shipping.  I'm up to 30 Devers cards and counting now, though the number is a bit higher than that as I have a few in pocket that I haven't scanned and added to my collection proper yet. 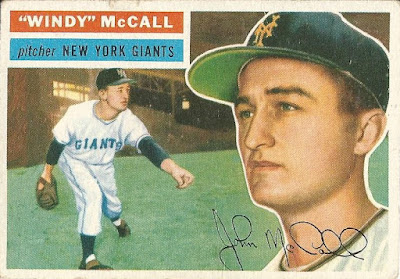 This past Monday was my birthday, and as a present to myself I put together a small order from an eBay seller who offered free shipping on orders of $25 or more.  I didn't go crazy, my final total was a modest $31.25, but I managed to pick up 14 different singles for that price.  Many of those are actually football cards (yes, seriously, post coming Sunday on that), but there were a couple of baseball cards included as well.

This one was too tempting to pass up due to the fact that it cost just $1.50 yet is right in line condition-wise with many of my other '56s.  Also, how can you not love a card where the subject is referred to as "Windy".  Add to the fact that it's a New York Giants card with an odd background (Polo Grounds maybe?), and I was sold. 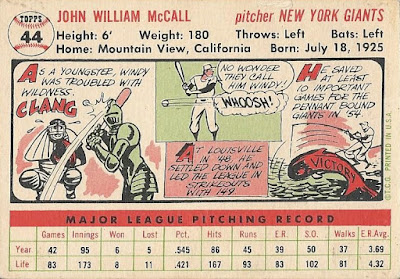 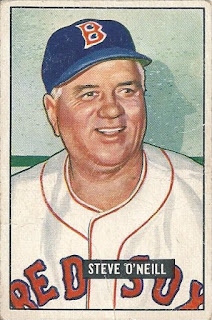 The other baseball card I picked up in that lot, and the final card in today's post, is this fantastic 1951 Bowman Steve O'Neill.  I've gone on record many times now stating my love for the early Bowman releases, the 1950-1952 full color mini releases in particular, and this is one that had somehow escaped my grasp until now.

This is my first Steve O'Neill card of any sort, and it's long overdue.  Steve was involved in Major League Baseball, either as a player or manager, pretty much consecutively from 1911 through 1954! 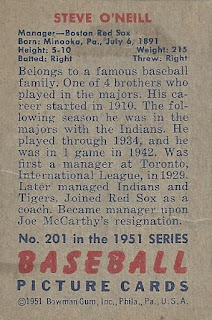 A small surface wrinkle and some gum stains on the back, just about perfect for my collection of early Bowmans as far as condition goes.  This one set me back just $3.  I can't believe it took me so long to pick one of these up when they can be found at prices like that.

So, there's an update from my little corner of the internet on this Friday evening.  Thanks for stopping by, and have a great weekend!
Posted by shoeboxlegends at 4:05 PM

I've been feeling a bit overwhelmed by the size of my collection lately, and I'm wondering if I need to make some harder decisions like you have. There's only so much "low-hanging fruit" around.

Was just talking to a friend of mine at the flea market today... about possibly selling off stuff I don't need to have in order to buy stuff I really want. But at the end of the day... I'm just too lazy. Congratulations on turning some unwanted items into $300. That's awesome!