A Pair of Old Sox

Congratulations to the 2018 Boston Red Sox on being crowned champions of the American League!  The ALCS was a thrilling series to watch, start to finish, and certainly a controversial one as well.  To celebrate the culmination of an amazing season with a World Series berth, here are a couple of much older Red Sox cards from my collection that I've never featured here before... 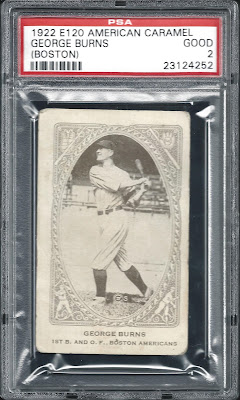 I've mentioned my love for the 1922 E120 American Caramel cards here on the blog more than a few times now.  I adore the ornate borders on these, and the fact that you get actual photographs of the players, not always the case when you go this far back.  I pick up low-grade Red Sox whenever I can find them within my budget, but that is not very often with these.  George Burns here is my sixth Red Sox card from this set, which puts me at 40% of a team set.

George was a damn good player, finishing as a career .307 hitter with three World Series championships.  In 1926 he won the American League MVP Award, which I confess I was not aware of when I picked this one up.  Hitting .358 with 64 doubles (yes, you read that right) seems like a good way to be named Most Valuable Player. 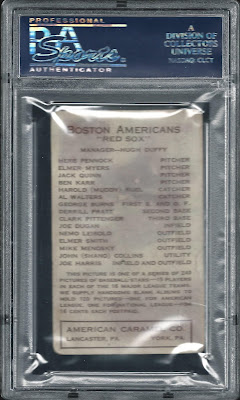 These types of cases don't scan too well due to reflection, but as you see the cards aren't numbered.  Some sites, including the Trading Card Database, list this as card #1 on the checklist.  Six Sox down, nine to go from this set.  Doubt I'll ever get them all, but I'm sure a few more will land in my lap at some point. 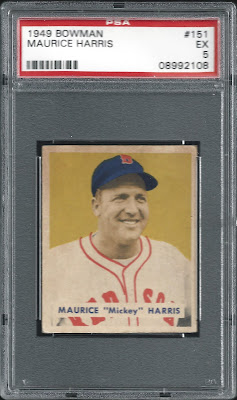 Here's the other half of today's pair, from a couple of decades after the Burns.  The early Bowman releases from the late '40s through the mid '50s have always been and always will be among my absolute favorite vintage baseball cards.  The 1949 release was the first to get the colorized treatment.  The design is so basic that I can't put my finger on exactly why I enjoy them so much, but I sure do.

Mickey Harris was a pitcher who, like so many from his generation, pressed the pause button on his professional career to serve his country in World War II.  After the war he was a major component of Boston's 1946 team that lost the World Series to the Cardinals, and was even named an All-Star that year. 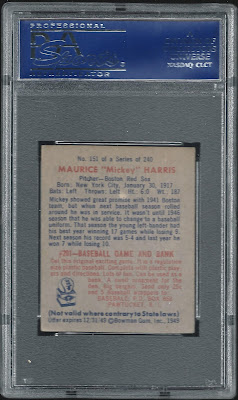 At #151, I believe this might be considered a rarer "high number" from the '49 Bowman set, but don't hold me to that.  Oddly enough, just like with the E120 American Caramel above, this is my sixth '49 Bowman Red Sox card out of 15 in the team set as well.  What are the odds of that?

Well, that's a wrap for today.  Hope you enjoyed this pair of moldy oldies.  I'll certainly be watching the NLCS tonight.  Still not sure who I would prefer win that series, but I certainly want the Brewers to win tonight to stretch it out to 7 games and tire out both teams that much more.

Thanks as always for stopping by!
Posted by shoeboxlegends at 5:04 PM

I love those old caramel era cards too! Especially the Red Sox! You can put 1922 together for cheaper than you'd think.