Twelve more Red Sox cards from my friend Dime Box Nick to show off today.  These are the final twelve from Nick's latest package, so they'll wrap up this Dime Box Dozen series, at least for now.  I've already got a healthy stack of cardboard building up for Nick, so I'm sure we'll have another exchange in the very near future here. 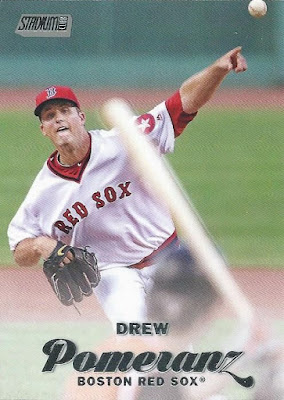 You can't go wrong with Topps Stadium Club, and when Stadium Club is combined with a retro uniform the result is even better. 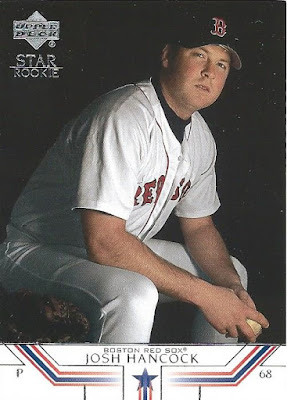 Josh Hancock pitched in just 3 total games for the Red Sox in his career, so it's somewhat remarkable that he's got a card from his time with Boston.  Sadly, he was killed in a drunk driving accident in 2007 when he was pitching with the Cardinals. 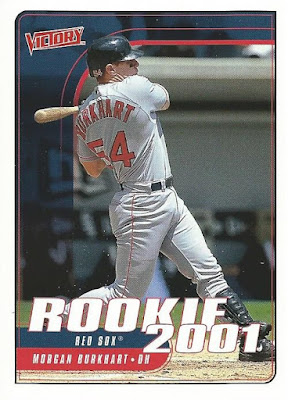 I confess that I have little to no memory of Morgan Burkhart, whose Red Sox career consisted of 36 games played between the 2000 and 2001 seasons.  I'm sure that has to do with the fact that I graduated high school in 2000, and was experiencing my first year living away at college in 2001.  Following the Red Sox during those two years wasn't exactly atop my priority list. Here's a nice holiday card of your 2018 AL MVP?  We'll find out soon enough I guess, though I do hear a lot of talk that Betts is the front-runner to take home the award.  I've all but cut out retail card purchases completely, so it's nice getting cards like this from a set I'd never even seen in hand in trade instead. 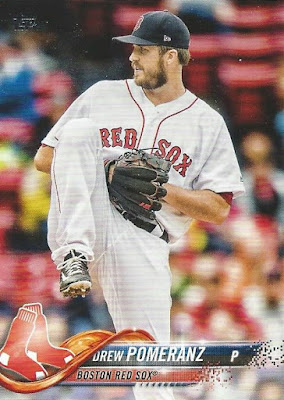 I'm still nowhere near a complete 2018 Topps team set for much the same reason, so I was pleased to see that Nick tossed in this Drew Pomeranz.  A definite need, one more crossed off that list. 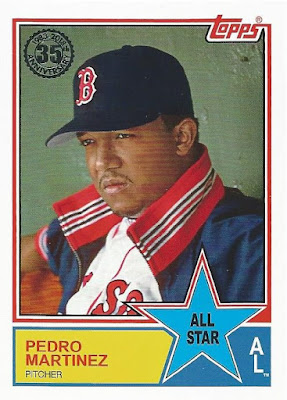 Here's one of those 1983-inspired inserts from this year.  Popped collar Pedro!  While I certainly consider myself more a team collector than a player collector, Pedro does sit comfortably inside my top 10 as far as baseball players I have the most cards of. 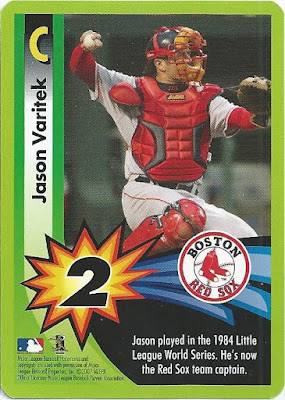 According to The Trading Card Database, this one is from a "Snap MLB Trade Up" set.  Looks like it was obviously part of a strategy game of some sort.  I have no idea, just happy to receive a new Jason Varitek card. 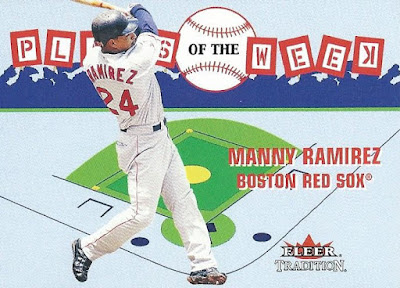 Here's a very busy Plays of the Week insert from Fleer Tradition.  I'm not sure this design worked so well, it looks to me like someone just kind of tossed a bunch of cluttered elements onto a card and went with it. 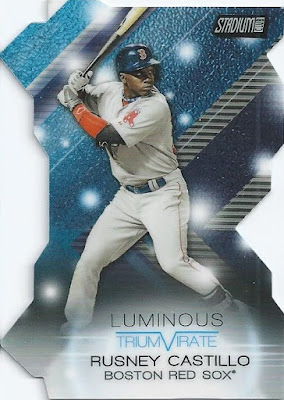 One the other hand, here's a card I feel looks quite nice.  Rusney Castillo may have turned out to be a very expensive bust for Boston, but this die-cut Stadium Club insert is just strange enough to work in my humble opinion. 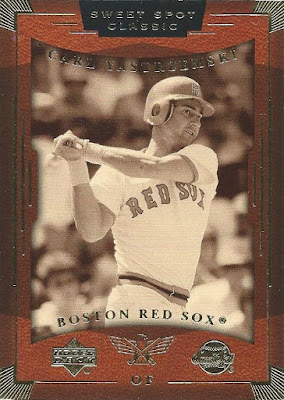 Sweet Spot Classic always felt like a very elegant effort from Upper Deck.  The sepia tones, museum-like border, and use of foil combine to give this card an air of class.  I'm grateful that Nick was willing to send this one my way. 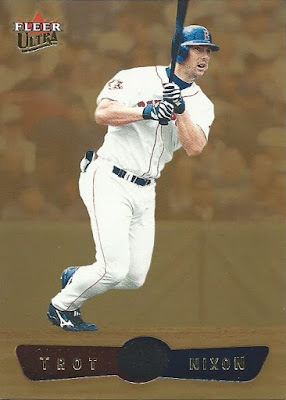 Ultra Dirt Dog, Trot Nixon.  This is obviously a Gold Medallion parallel, which I think is a bit too heavy on the gold this particular year.  I'd prefer something a little more subtle to differentiate these from their base card counterparts. 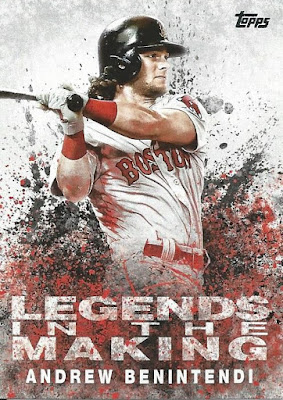 Lastly, here's another 2018 flagship insert, Legends in the Making.  I guess this is an appropriate card for October, since in my opinion it looks a bit like a promotional poster for a horror movie called Legends in the Making, starring Andrew Benintendi as the axe-wielding serial killer.

Nick, thank you one last time for the fantastic delivery of cardboard this past summer!  As I mentioned above, I'll have something headed your way in the very near future here.

With this package out of the way I can now get to some long overdue thank you posts for Douglas, Chris of The Collector, my friend Oscar from Sweden, and Joe Shlabotnik.  Until then!
Posted by shoeboxlegends at 11:05 AM

You're very welcome, Shane! Always fun to put together a stack of cards for you.

The Varitek is indeed from a strategy/board game I found in my room recently. I must've received it as a gift years ago, played it maybe once or twice, stuck it in my closet and promptly forgot about it. I have no memory of the game itself and I'd forgotten they came with cards. They made for nice little oddball additions to my binders (and fun tradeables for others!).

Popped collar Pedro! I like the Pomeranz in a throwback uni. While I don't search out the holiday cards the Mookie is a nice card. I love all the Yaz cards that come out on new cardboard. That is a nice looking card. Legends in the Making are a favorite of mine. Great post.