COMC Blaster - All Baseball, All the Time

As the baseball world pauses for a couple of days to catch its collective breath prior to the World Series, let's do a baseball only version of one of my patented "COMC Blaster" posts.  If you've read one before then you know the drill, let's take a look at how $20 in COMC credit matched up compared to your average retail blaster. 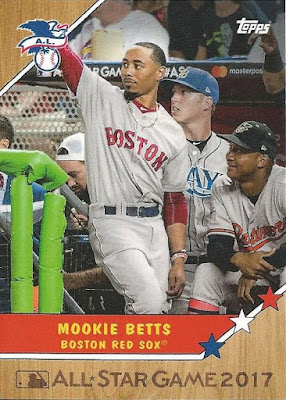 The front-runner in the 2018 AL MVP discussions seemed like an obvious choice to lead off with.  I have to admit, the design Topps used for this (online only I think?) release is not very appealing to me.  It's something a little different for my modest Mookie Betts collection though, and at just 73 cents I didn't exactly break the bank for it. 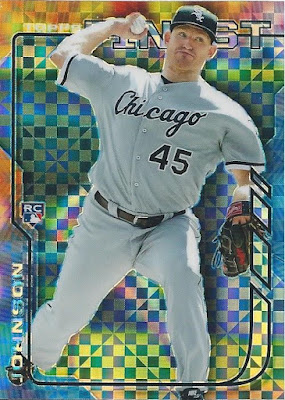 Next up, a trio of some of my favorite parallel cards ever, the 2014 Topps Finest X-Fractors.  Not all of the players on the 100-card checklist are stars, though the majority are.  This one was a need that cost me just 45 cents in credit. 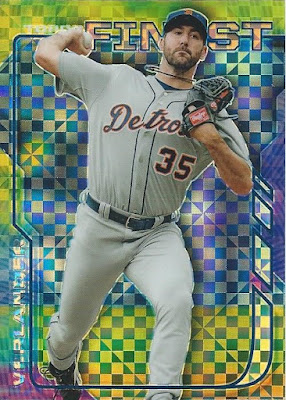 I had to pony up a whole 64 cents for Justin Verlander, but given that he's consistently been one of the best arms in baseball, and is a future HOFer, that didn't seem all that unreasonable. 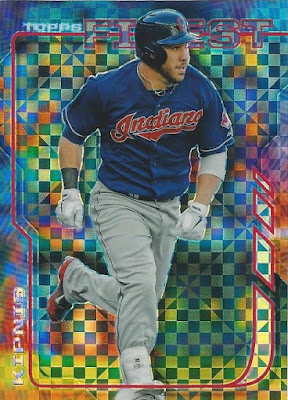 Jason Kipnis is still plying his trade in Cleveland, and had good power numbers this year despite a .230 average.  49 cents for this one.  With these three in hand I'm now at 16 cards out of the 100-card set of these parallels.  Chipping away! 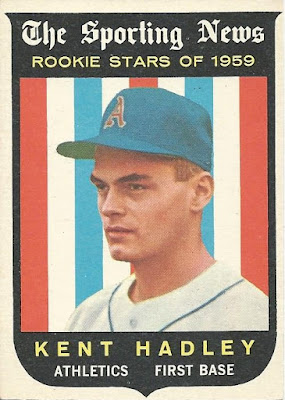 Speaking of chipping away, my painfully slow pursuit of 1959 Topps continues with another three cards here.  Kent Hadley enjoyed a brief Major League career before, to use a Lebron James term, "taking his talents to" Japan.  Still, a nice mint specimen of a card I needed for 67 cents. 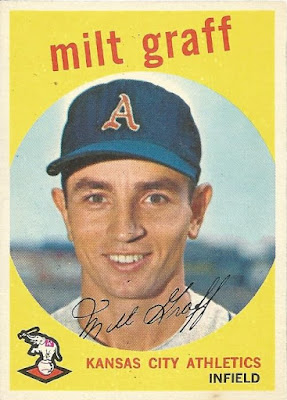 From the same seller in a bundle came this Milt Graff, again at 67 cents.  I will quite literally buy any remaining '59 that I need in this shape at 3-for-$2 prices. 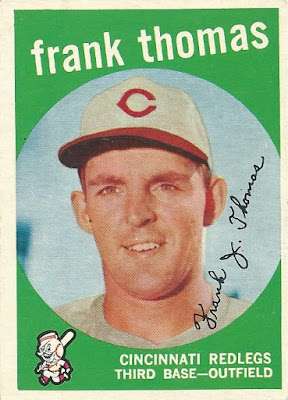 The original Frank Thomas cost me 88 cents.  1959, the only season Frank would spend with the Reds, was a down year for the slugger.  He appeared in only 108 games, but even accounting for a shortened season the numbers weren't pretty.  Oh well, still looks great in the set binder! 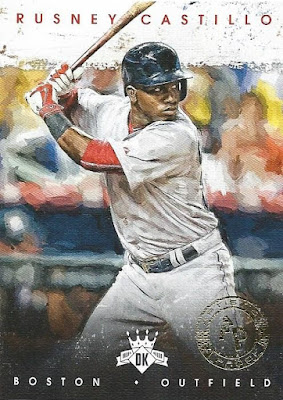 I'm sure someone will get a laugh out of this one.  I shelled out $1.30 for this Rusney Castillo Artist's Proof parallel from Panini Diamond Kings.  It's a relatively rare card, and I'm happy to have it for my Red Sox collection, but I'd say it's one that only a team collector can appreciate most likely. 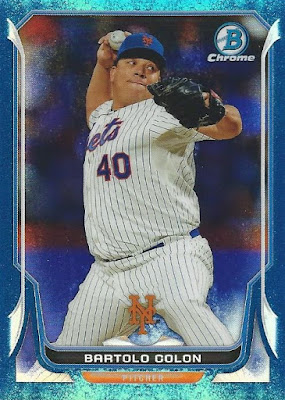 I feel like I end up showing one of these Bowman Chrome Bubbles Refractors every time I do one of these posts.  What can I say, there was a period there where I was snatching up any I could find on the cheap.  I also love just about any new Bartolo Colon card, so this one's a win for my collection on two fronts.  $1.15! 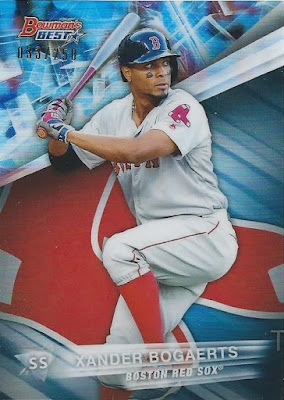 On the subject of shiny blue cards that I like quite a bit, here's a beautiful Bowman's Best Blue Refractor of my favorite active player, Xander Bogaerts.  This is my 110th Bogaerts that I've cataloged so far in my collection on TCDB, still the largest Bogaerts collection on the site at this point.  Considering this card is serial-numbered to /250 I feel I got an amazing deal on it at just 65 cents. 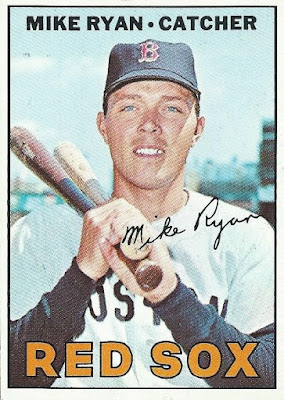 Every once in a while I'll comb through some vintage Topps sets that I don't have completed team sets for and see if there's any low hanging fruit that I'm missing.  That's exactly what happened here with this '67 Mike Ryan.  My cost?  43 cents. 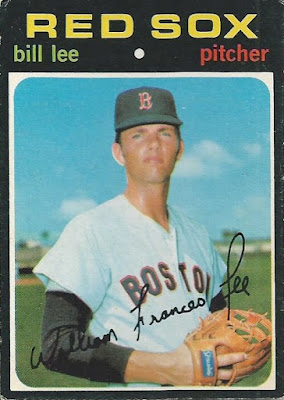 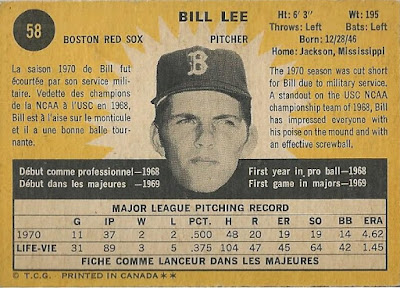 Because it's an O-Pee-Chee!  These floating heads are some of the most well-done card backs in the history of baseball cards in my opinion, and in that of many collectors.  Feels great to add the floating head of one of baseball's more unique characters to my collection at last. 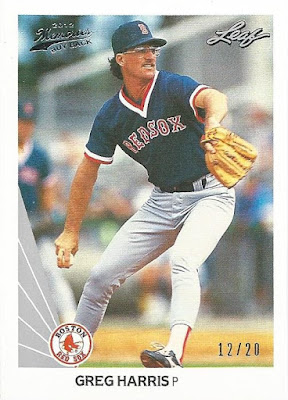 I'm a sucker for the '90 Leaf buybacks from the 2012 Leaf Memories set.  I know they're corny but those of you collecting back then remember what a big deal 1990 Leaf was I'm sure.  These are kind of fun to chase being relatively rare at just 20 copies each.  I think it's my third Red Sox card as far as these parallels go.  Believe it or not, this is the most expensive card in today's post at $2.36. 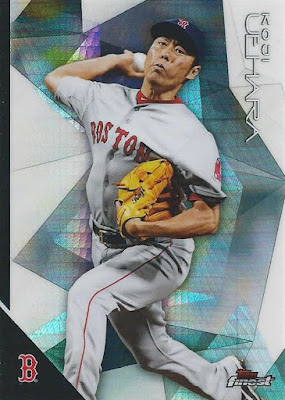 Here's a cheapie.  Since I'm helpless in the face of a good shiny card I couldn't resist throwing two quarters and a nickel at this Finest Koji Uehara Prism Refractor. 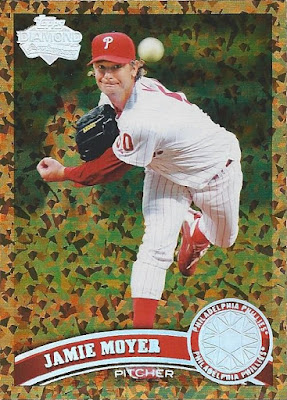 The 2011 Topps Cognac parallels were just fantastic.  In fact, I'm not sure if Topps has made a parallel I like more in the time since.  I've always loved Jamie Moyer (I mean, he was 48 years old when this card was printed!), so I couldn't leave this behind at 45 cents. 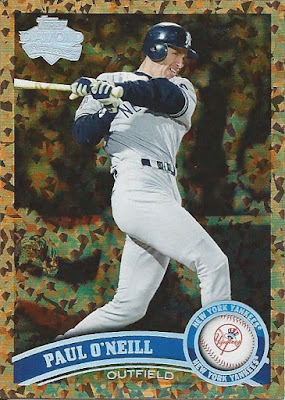 The legends parallels I enjoy even more.  Just about any that are available at a buck or less that I don't already have are going to get snagged.  That's exactly what happened here with Paul O'Neill for an even dollar... 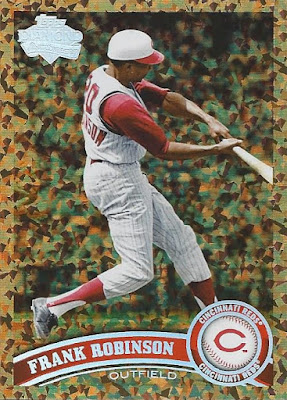 ...and Frank Robinson, who was an even better steal at 75 cents.  Man, for 75 cents I'd probably buy duplicates of this card just because it's so beautiful. 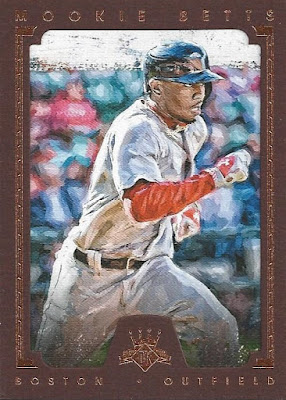 Continuing the theme of cards I got for 75 cents, here's a nice framed parallel of Mookie Betts from Panini Diamond Kings, the 2016 version.  That was a year or two ago now, I doubt I'll find another at that price again. 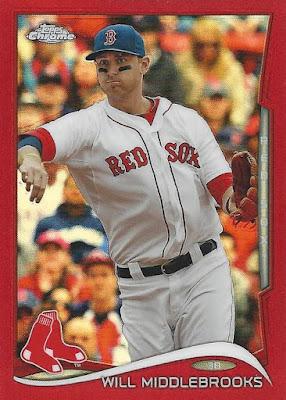 As a Red Sox fan, there's almost nothing more visually appealing than a Topps Chrome Red Refractor parallel.  The only problem is they're pretty damn rare.  This Will Middlebrooks, for example, is numbered to just /25 copies.  I paid $2.32 for it just because it's rare that I ever get the opportunity to pick one up, regardless of the player.

One of my all-time white whales would be the Xander Bogaerts Red Refractor from the very same set as the Middlebrooks above.  I've never seen one, but I'd be prepared to pay dearly should I ever encounter the card. 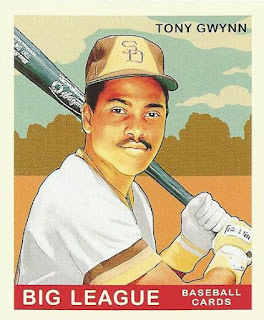 I've mentioned on a few occasions that 2007 Goudey was the set that got me back into collecting over a decade ago now.  A handful of the painful short prints still elude me to this day, but that number has dropped by one now with Tony Gwynn in hand.  $1.27 well spent! 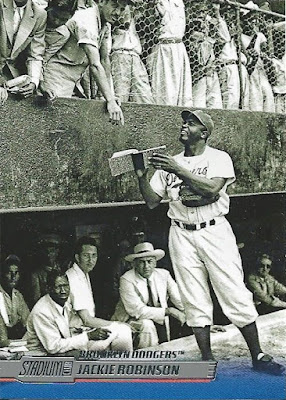 Here's one that I absolutely should not have waited years to pick up.  I was never fortunate enough to pull Jackie Robinson's base card in any of the packs of 2014 Stadium Club that I opened, but I was able to rectify that at long last courtesy of COMC, and for just 74 cents.  What an image!

The 21 cards in today's post bring us to a total of $19.87, so we'll obviously call it there.  A whole bunch of awesome cards for my collection, and saved 12 cents off a blaster price at that!

Hope you saw at least a card or two that interested you.  Thanks for reading!
Posted by shoeboxlegends at 11:00 AM

I check for deals on those 2011 Topps Legend liquorfractors regularly -- once in a while I find steals for 60-70 cents a piece (and thus end up in my cart). That Frank Robinson is especially fantastic.

Love that Jackie Robinson. COMC Blasters are definitely my cup of tea. This morning I broke two 2018 Topps Archives blasters and pulled three cards that would fetch $1 or more on COMC. When you add in the entertainment value of ripping packs... maybe I got $10 to $15 value in total. If I find some free time after school tomorrow... I might try to put together my own COMC blaster.

OPC Lee! And I'm not sure what I like more - the Jackie, or the red refractor of a Red Sox (even if it is Middlebrooks) the '59s are nice, too. I keep an eye out for cheap commons from that set. If I see any on COMC (or the card show, if I go back in Dec) I'll pick 'em up for you.