Today I've got a long overdue post, featuring some fantastic cardboard that made its way to my little household here in Rhode Island all the way from Sweden!  These all arrived in a trade package a few months ago from my buddy Oscar, one of Shoebox Legends' international friends.

Oscar is an awesome guy, and though we've never met in person he enjoys this blog and has taken it upon himself to ship cards halfway around the world to me on more than one occasion now.  Just some further evidence that sports card collectors are among some of the friendliest people you'll meet anywhere on the globe. 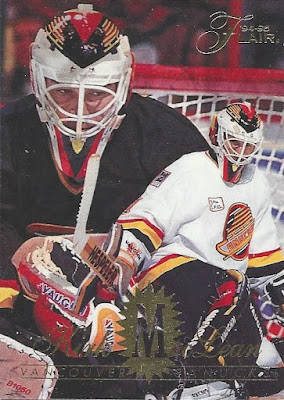 Oscar sent so many cards that I couldn't possibly do his trade package justice here today, but I have picked out a few highlights to share with you.  First of all, you can't go wrong with '94-95 Flair hockey.  Flair was basically the definition of high-end in the days before autographs, patches and scarce serial-numbered inserts ruled the land.  These really hold up and still look classy to this day.  I'd love to complete the set and display it in a binder someday. 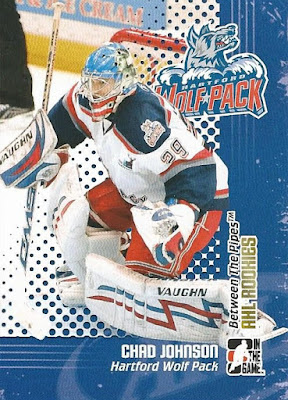 Here's a unique one, featuring Chad Johnson of the Hartford Wolf Pack.  The Whalers may be gone (though the Carolina Hurricanes are going to don the sweaters for a couple of games this season against the Bruins, and yes I have tickets to that game in Boston already!), but we still have the Wolf Pack.  They're the AHL affiliate of the New York Rangers.  Though I have been trying to thin my collection down overall in the past few months, I'll certainly hang on to this one due to the local ties. 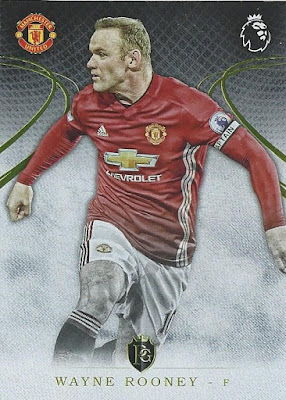 How about some soccer cards?  It is Premier League Saturday, after all.  Oscar's package included my very first three cards from this particular Topps Premier League Gold set. 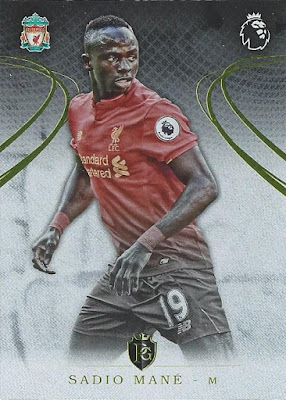 I really like the minimalist design, and sending me a star player from my personal favorite club (Liverpool) is a sure way to make any trade package a success. 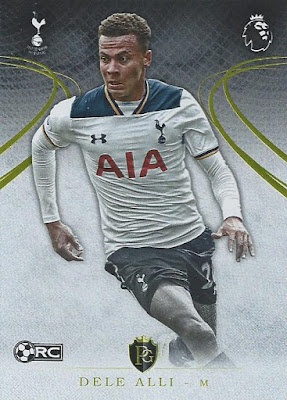 Perhaps my favorite of the trio though is this RC of Tottenham Hotspur mid-fielder Dele Alli.  This guy is a ton of fun to watch, and teamed up with the great Harry Kane has been one of the more entertaining players in the league at times over the past few seasons.  Love this card! 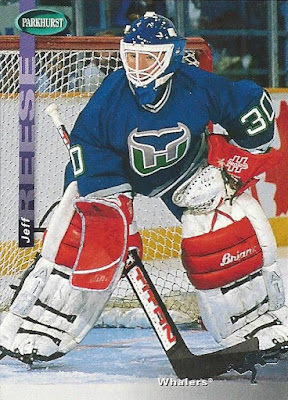 Oscar knows I like the Whalers, and always seems to include some in his trade packages.  It's getting harder and harder to find holes in my Whalers collection as the years roll by, and some of the cards Oscar sent along were dupes, but he did find a couple of new ones including this Parkhurst SE card of goalie Jeff Reese. 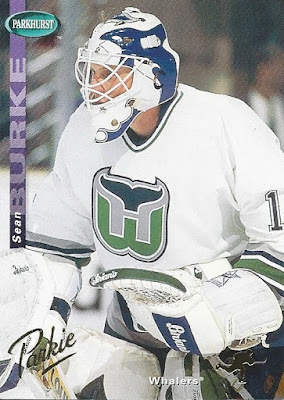 From the same set, I also needed this Sean Burke, which as you can see in the lower left is a "Parkie" parallel.  This pair of new Whalers cards will help me further climb the ranks towards my goal of having the #1 Hartford Whalers collection on the Trading Card Database.  The ones I already had didn't go to waste either, as they've already been routed to Billy at Cardboard History. 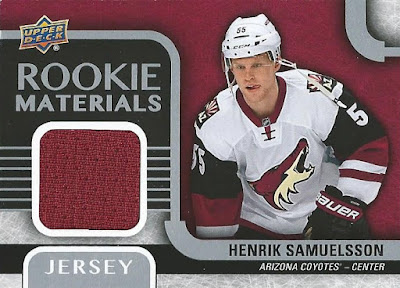 Speaking of the Whalers, here's a great Rookie Materials Jersey card of Henrik Samuelsson, son of former Whalers defenseman Ulf Samuelsson.  Another card with some pretty cool local ties for me, plus it's not every day that you see a Coyotes swatch of this shade on a card.  Very cool. 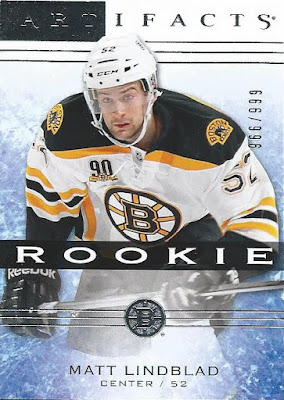 Here's an obscure one.  Matt Lindblad played in four total games with the Bruins, the only four games of his NHL career, before hanging up the skates.  He's still with the organization now, just in a scouting capacity.  I really enjoy cards like this of short-term players for the teams I follow, great stuff. 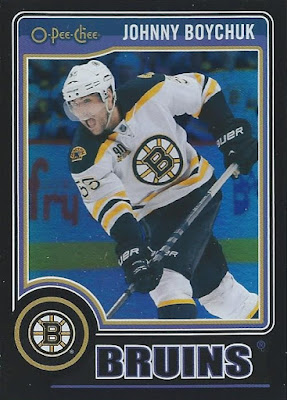 Next up, a nice Black Rainbow Foil O-Pee-Chee parallel of Johnny Boychuk.  Like many Bruins fans, I loved this guy when he suited up for the B's.  Johnny is still playing in the NHL, now with the Islanders in his 12th season in the league.  This card is serial-numbered to /100, and will look great paired up with the Jaromir Jagr I have from this same parallel set. 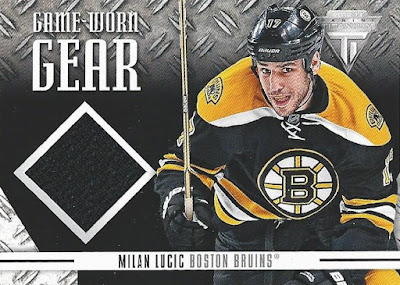 Here's another fan favorite who played on a lot of those same Bruins teams with Boychuck a few years back.  Both of these players are firmly entrenched in the hearts of fans as well due to the fact that they were significant contributors to the 2011 Stanley Cup winning team.  A nice relic card here indeed. 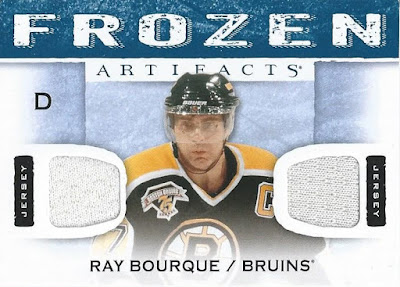 As nice as that Lucic is, the final hockey card I have to show today puts it to shame.  It's not every day that you receive a dual relic card of one of the greatest defensemen in NHL history in your mailbox.  Simply fantastic, I'm not sure what I did to deserve this one but I'll take it! 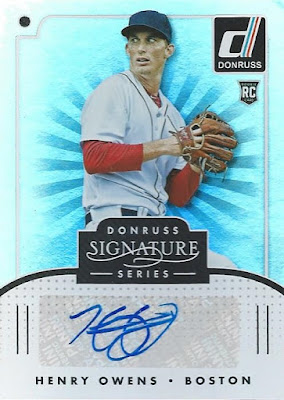 Oscar knows I'm a big Red Sox fan as well, and this time he tossed in a couple of baseball cards to top off the package.  I'd imagine Boston Red Sox cards may not be the easiest thing to come across over in Sweden, so I was shocked and amazed to find a pair of them included.  I know there are about a million Henry Owens cards out there, but an autograph's an autograph and this one's nice and shiny as well. 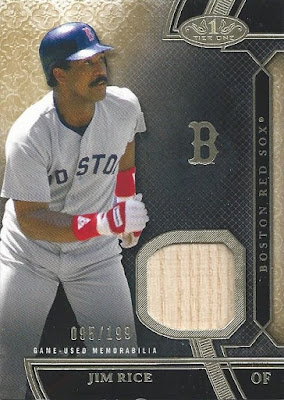 Let's close the post out with this jaw-dropper.  Yup, that's a piece of HOFer Jim Rice's bat.  What a beautiful relic card.  For some reason, when it comes to baseball cards, I've always enjoyed bat relics more so than jerseys.  This one will certainly remain a cherished part of my Red Sox collection, not only because it's a great card, but because of the backstory and the fact that a collector halfway around the world whom I've never met in person just sent it to me out of the kindness of his heart.

I finally got off my butt this week and got together some return cards for Oscar.  In fact, I was so stunned by his generosity that I purchased some football cards on eBay just to send back to him (Oscar's a big NFL fan, and football cards can be tough to locate in his country).  I'll have that on the way to you in the coming days Oscar!  In the meantime...

Posted by shoeboxlegends at 9:51 AM

Cool stuff! And thank you for sending your dupes to me, I really appreciate it, even if I have been too busy to look through much of the box yet, I did pull from it for my card of the day again this week!

Lots of great cards in this post... but you were wise to kick things off with 94/95 Flair. Beautiful set.