I've been too busy to blog recently, but I did want to take a moment to celebrate the 2018 Red Sox World Series Championship!  I've been following the team pretty religiously for a good 25 years now, and this year's club was easily within the top three over that period of time, maybe the best.

To celebrate I've got four new Red Sox cards to show off tonight.  One for each World Series that I've been fortunate enough to see the team win now in my lifetime... 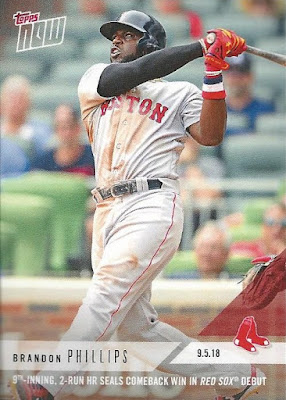 Let's start with the most obscure.  I didn't buy very many Topps NOW cards this season, in fact this one is just my third all year.  I figured it might be my only opportunity to get 37-year-old Brandon Phillips into my collection in a Boston uniform.  His reclamation project with the Sox lasted just 9 games, and wasn't very noteworthy at all, except... 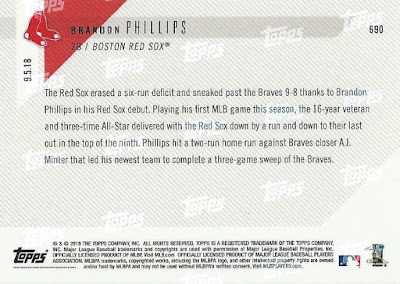 ...for the memorable game on September 5th that resulted in this card.  Phillips' two-run home run with the team down by one and down to their final out swung the game around and resulted in a Red Sox win.  Aside from that one swing, Brandon ended up with just two other singles for Boston, and hit just .130 in his time with the club.  Great card though. 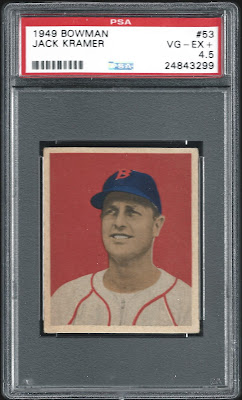 How about another beautiful '49 Bowman card towards my Red Sox team set?  Jack Kramer was a solid starter for the St. Louis Browns for much of the 1940s before the team traded him to Boston after the conclusion of the 1947 season.  In 29 starts for Boston in his first season with the club in 1948, he won a career high 18 games.  In 14 of those 29 games he went the distance, and two of those were shutouts. 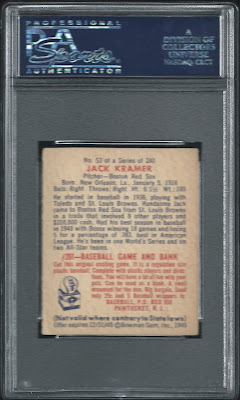 Kramer's production dropped sharply after 1948, however.  He began to be used more out of the bullpen starting in 1949, and his final Major League season came in 1951.  Just about at the halfway point now as far as a team set goes from this release! 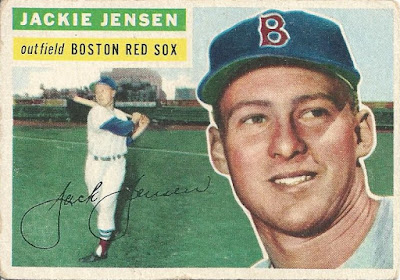 Jackie Jensen had another extremely solid year for the Red Sox in 1956, the year this card was printed.  He hit a career best .315 with 20 home runs, 97 runs batted in, and an impressive .901 OPS.  I can't believe this one set me back just an even $2 on COMC.  Sure, it's not in perfect mint condition but it's more than acceptable to meet my minimum requirements for a card from the '50s. 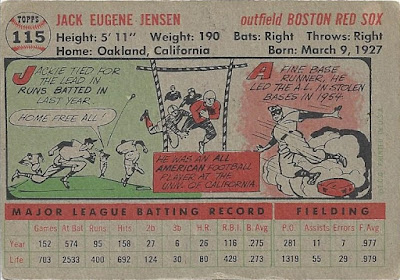 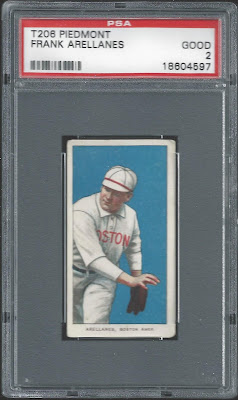 Last card for tonight.  Always a good day when you can add a new T206 tobacco card to your collection!  The subject, Frank Arellanes, was a short-term Red Sox player, as his MLB career (spent entirely with Boston) lasted just three seasons.

His best season by far was 1909.  He made 28 starts that year, winning 16 games, but also completed 15 games and ended up with 8 saves.  Sadly, Frank passed away at age 36 from illness.  A beautiful card here (are there any unattractive T206s?), I love that you can clearly see the Boston uniform. 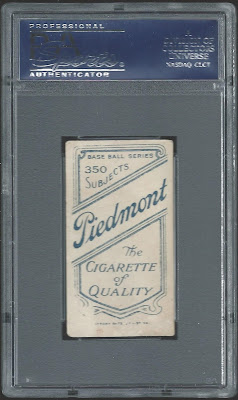 That's about all I have time for tonight.  Four cards with some good variety for my Red Sox collection, with one over a hundred years old and another printed just this past summer.

Fantastic cards! Nice job picking up Dat Dude, doubt he'll have more than one or two Red Sox cards. And the T206 card is a real beauty!

I felt the same way about picking up that Brandon Phillips Topps Now card. I would not be shocked if that is his only card with Boston.

But the Egan card is very appropriate for Halloween!

Great variety of vintage. The 1956 is Topps though.