I spent over five hours in the car today thanks to a brutal commute to downtown Boston for work, so I'm not feeling particularly verbose this evening.  Seems like a good opportunity for processing a trio of 1959 Topps buybacks I've had in queue for the franken-set for a while now! 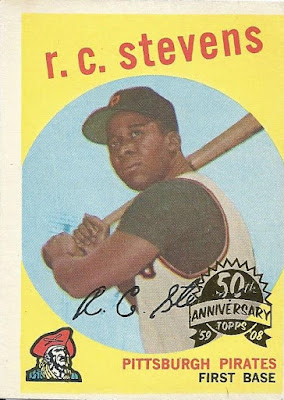 First up, a horrendously mis-cut R.C. Stevens card.  I'm really not familiar with R.C. as a player, not surprising given that in looking him up just now I learned that he appeared in all of 3 games in 1959, and less than a full season's worth of games in his entire career. 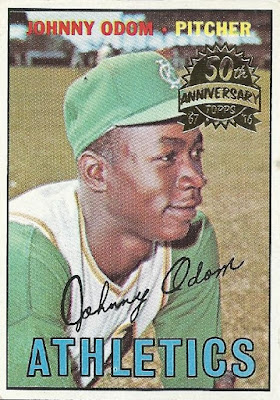 Tough draw for R.C. as far as the franken-set goes as well, as he's matched up against this Blue Moon Odom 1967 buyback. 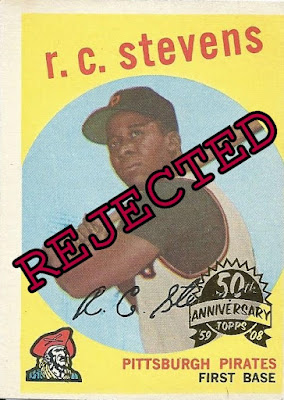 As much as I love 1959 Topps, I can't let that cloud my judgement here.  Odom is just the better buyback. 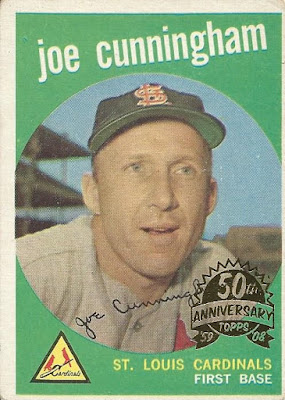 Next up, Joe Cunningham of the Cardinals.  While I do recognize his name, I confess that I wasn't aware of how good a player Joe was.  1959 was the best seasons of his career as well, as he hit an impressive .345!  He led the league with a .453 on-base percentage as well, was named an All-Star and even made a few MVP ballots. 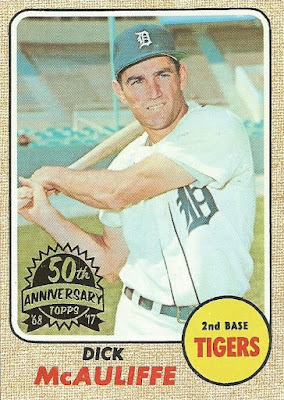 Now, I already had this '68 Dick McAuliffe buyback in slot 285 of the binder.  This is a tough call because I like the photograph better on the '68.  Not only that, but the Tigers won it all in 1968 which gives this card some more weight.  Finally, Dick was no slouch either, in fact he led the league in runs in '68 and finished higher in MVP voting than Cunningham did during his 1959 season. 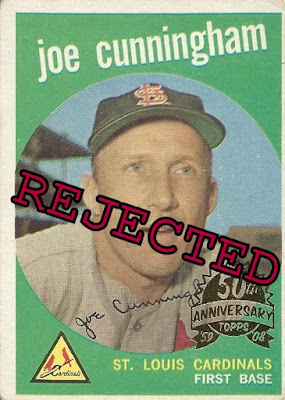 I decided to go with the McAuliffe but I'm honestly not sure whether I made the right call here.  What do you think? 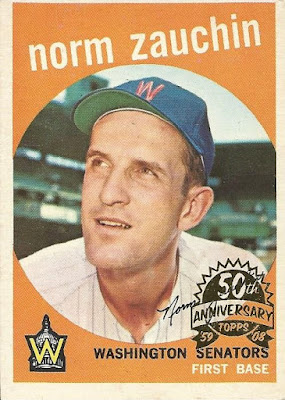 Here's the last one for tonight, and oddly enough it's another first baseman.  Norm Zauchin played his earlier seasons with the Red Sox, but finished up his career with a couple of seasons in Washington in the late '50s.  He finished third in Rookie of the Year voting in 1955 with Boston, but by 1959 he was about out of gas. 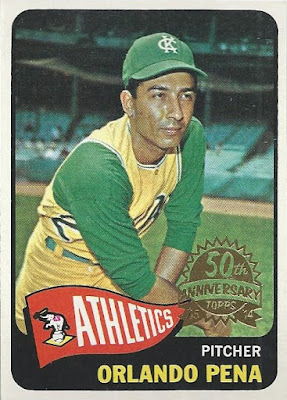 This sweet and very colorful Orlando Pena has held down slot 311 for some time now... 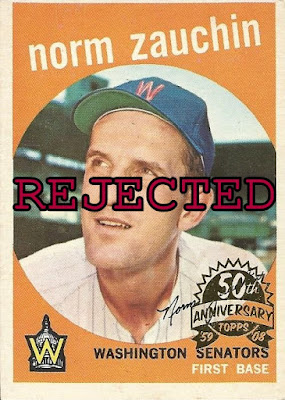 ...and will continue to do so.

Well, that's a wrap for this evening.  Three nice '50s buybacks, and not a one made the franken-set binder.  Just goes to show you that it truly is no small feat for a buyback to fight its way into the binder at this stage of the project!

The A's did fairly well today in regards to your Franken-set.

P.S. Sorry to hear about being stuck in your car for 5 hours. That sounds miserable.

FWIW, I agree on your call on the McAuliffe.

Definitely McAuliffe... But nice buybacks all around!