When I first returned to the hobby in 2007, I was enthusiastic about collecting the way I used to when I was a kid.  Buying boxes and packs, and hand-collating sets.

Over the years though I've become somewhat disenchanted with that approach, and these days I'm much more likely to make a smaller number of hand-selected purchases of more significant single cards for my collection.  A few weeks back I was parsing through some baseball cards I'd picked up years back, scanned and cataloged, and then never really looked at again.  I'm trying to reduce the size of my collection, so 99% of what I came across went into a pile I'm shipping out to other collectors.

I did find three cards from 2012 though that I decided to hang onto, and I was surprised at the "value" this trio holds a few years later. 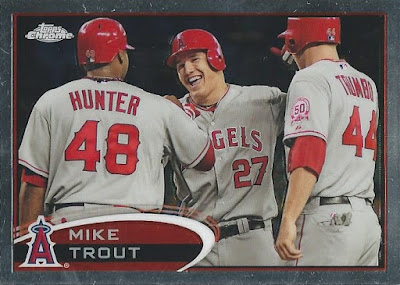 First up, a 2012 Topps Chrome Mike Trout base card.  As most collectors know, Trout's rookie card was actually in 2011 Topps Update.  So, while not a rookie strictly speaking, this is Mike's first Topps Chrome card.  It isn't a refractor or anything like that, just the standard base card, yet the cheapest example on COMC as I type this post is still listed at north of $13. 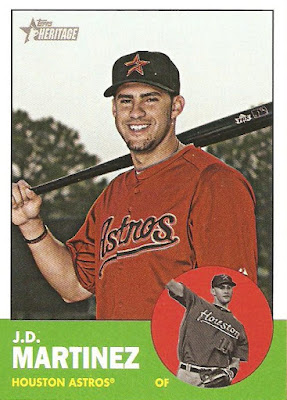 Like Trout, J.D. Martinez had his rookie card in 2011 Topps Update, making this 2012 Topps Heritage card his first in that line.  Martinez obviously doesn't draw quite the same interest among collectors as Trout, but a few more seasons like the one he just put in (and fingers crossed a World Series championship?) might get him a bit closer anyway.  Looks like this one's selling in the $3-$4 range at present, but if this card's on your want list I'd probably grab a copy soon.  Why do I say so?  Because... 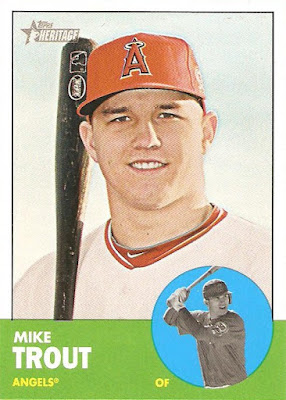 ...the last of the three cards I saved from this particular box is Mike Trout's first Topps Heritage card.  Cheapest copy of this one on COMC as I type this?  How about $34.75, and that one has a "condition note - ding on bottom left corner".  The cheapest mint copy like this one is a hair over $60.  Are you kidding me?  This was sitting unprotected, not even a penny sleeve, in the middle of a stack of 2012 Heritage within a box.  Now it's in a one-touch magnetic holder.

These three cards further reinforced in my mind that I'm doing the right thing with the mass purging I'm currently undergoing.  Had it not been for that downsizing project, these three would've sat in that box for probably another ten years collecting dust.  Now they're properly protected and sorted into my much smaller collection of keeper cards that I look at and enjoy much more often.

Do you have any examples like this of rediscovering buried treasure within your own collection?  If so, I'd love to hear about it in the comments.
Posted by shoeboxlegends at 2:00 PM

Nice! I'll need to check my Trout PC to see if I've got that pair.

The other day going through some of my cards, I stumbled upon a J.D. Martinez Pro Debut card I didn't realize I owned. So that was cool.

I tend to believe this happens all the time with collectors. And that it is a good thing.

I recently discovered a 2013 Topps Update Christian Yelich rookie card in a long-forgotten box I'd had lying around my room. That was a nice surprise -- finally convinced me to take the plunge and start collecting the guy.

Had no idea the Heritage Trout was "worth" that much, especially since it's not even really a rookie. I've had a copy in my Angels binder since that set came out six years ago. I'll never understand the baseball card marketplace...

Man. Can't believe that Heritage Trout is worth that much. I'm tempted to dig through my boxes to see if I have a copy. Most of my buried treasure stories involve basketball rookies. I collected heavily during the Durant, Westbrook, and Curry rookie years... and was blown away by what some of their rookie cards sold for.

I can't think of one off the top of my head where I've come across the same thing. These are some great cards though. I just read about that Heritage Trout card somewhere - probably Blowout cards.com. Always fun to find gems that have gone up so much in value. Congratulations!