Just a single buyback to share with you this evening, but it's a significant one.  Ladies and gentlemen, the great Hoyt Wilhelm! 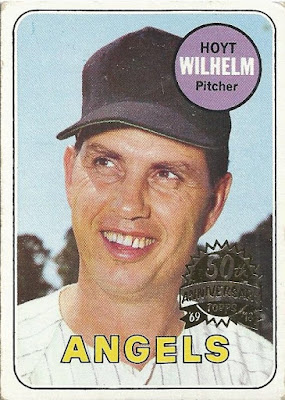 Stumbled upon this one recently while perusing eBay for buybacks.  The release of Heritage High Numbers a little while ago resulted in an influx of 1969 Topps Heritage buybacks in the marketplace.  When I found good ol' Hoyt Wilhelm available as a Buy-It-Now for less than $5 I was sold!

Normally a blacked out ball cap like the one seen here would drive me nuts, however it's not every day that I get the opportunity to add a 1960s HOF card to the Buyback Franken-set so I'm willing to overlook it here.  Besides, the other reason I am excited about this one is that it represents my first #565 buyback, filling another empty slot in the binder.

I'm honored to have the esteemed Mr. Wilhelm included in this project!

LOVE IT! I've been a Hoyt collector for a long time now. Great to have him in the set.

What a sweet pickup! Congrats.

Congratulations on filling an empty slot! Doing it with a vintage hall of famer makes it even more special.

The man, the myth, the legend.