Nothing Plain About This PWE 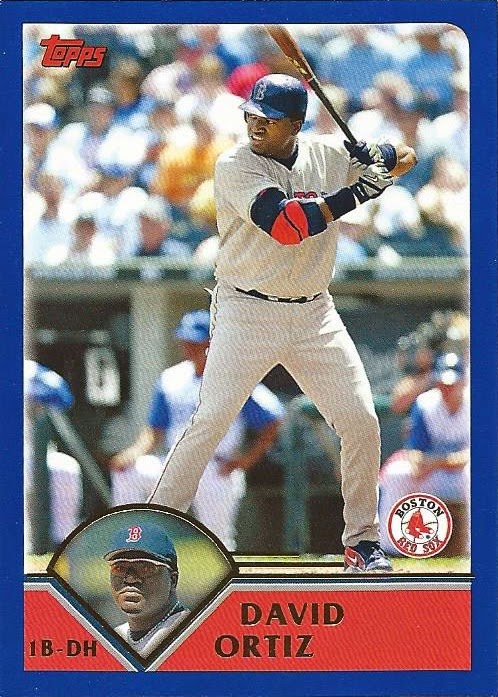 Without a doubt my most frequent trading partner is Mark Kaz of the great blog This Way to the Clubhouse.  Mark's got his Mets collection organized and fully searchable on Zistle, just like I do with my Red Sox collection.  It makes it incredibly easy for either of us to quickly send off super accurate PWEs.  I've totally lost count on how many we've even sent back and forth at this point, but I know the one that arrived in my mailbox earlier this week was incredible!

Let's start with the David Ortiz card above.  It's from the 2003 Topps Traded set, and represents David's "Red Sox RC".  I can't believe I went so long without this essential modern day Red Sox card in my collection.  Just fantastic.  I don't think anyone who was pulling this card from a pack in 2003 could've had any inkling as to how Ortiz's next 12 years would go. 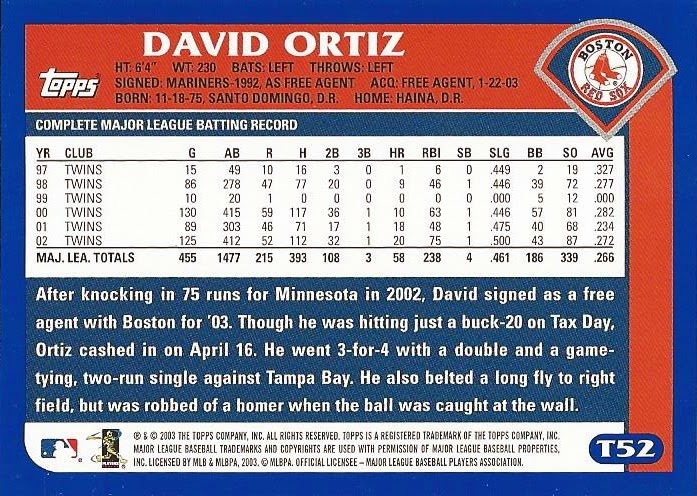 I like that the back of the card actually lists how he was acquired, and the date of the acquisition. 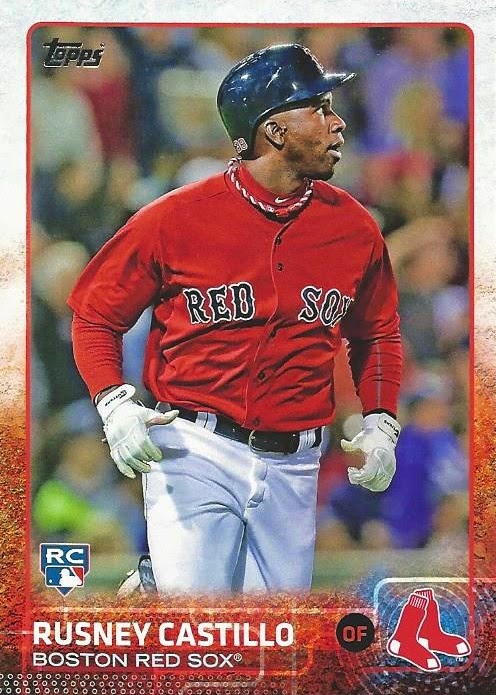 The Ortiz would have made for a great PWE on its own, but Mark also included a true RC from 2015 Topps.  This is the Red Sox card I was most excited to land from the entire Series 1 set, Rusney Castillo's rookie.  Very pleased to finally add my first Castillo card to my Red Sox collection.  The team has way too many potential outfielders at this point, but so far I guess he's in your Opening Day starting 9? 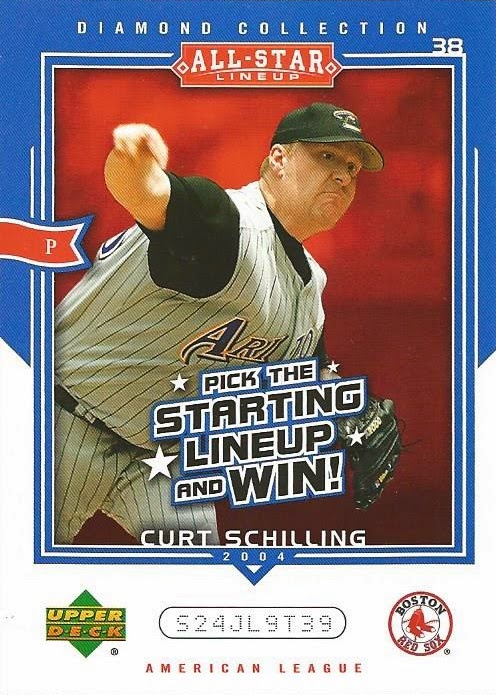 Here's a promotional/advertisement card that came inserted into packs of 2004 Upper Deck Diamond Collection.  Basically you would head over to some website Upper Deck threw together and try to pick the starting 9 for the 2004 All-Star teams.  Not entirely sure what the code along the bottom is for.  I like this because it illustrates Curt's transition from the D-Backs to the Red Sox, since he's depicted with one but listed with the other. 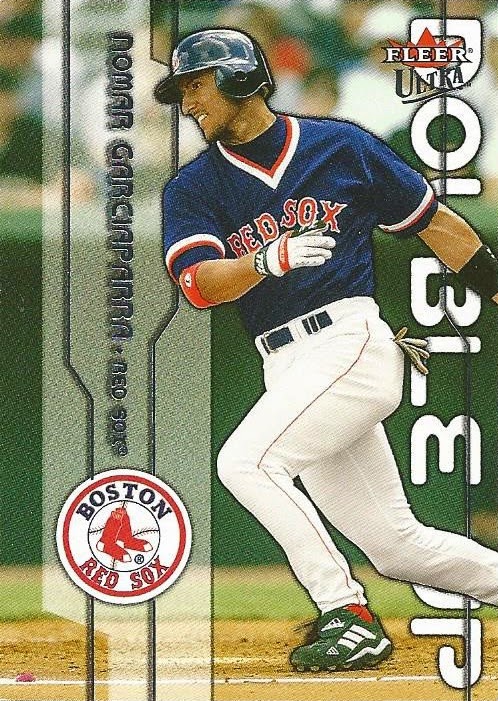 I had never seen these Double Up inserts from 2003 Fleer Ultra before.  As the name implies, each card features two stars.  Sharing Nomah's card... 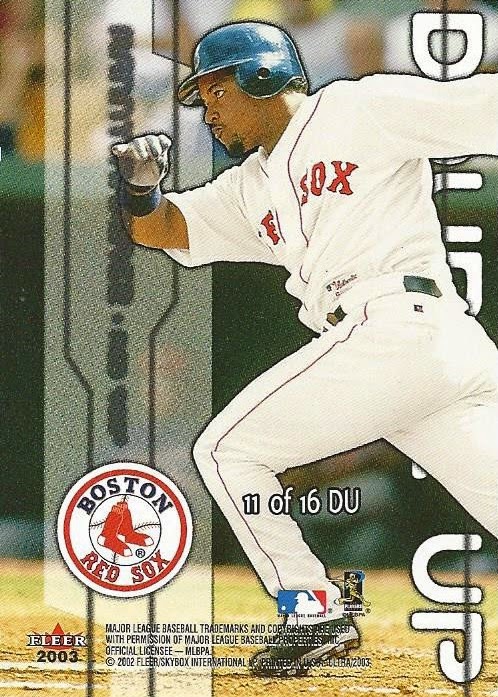 ...is slugger Manny Ramirez.  The awesome thing about this package is that 1997 - 2006 is basically a huge dead zone for my collection.  I wasn't collecting at all during those years, and though I've picked up a handful of cards from time to time, it's the period where I have the largest gaps in my Sox collection.  Many of these cards are right in that wheelhouse.  Great stuff. 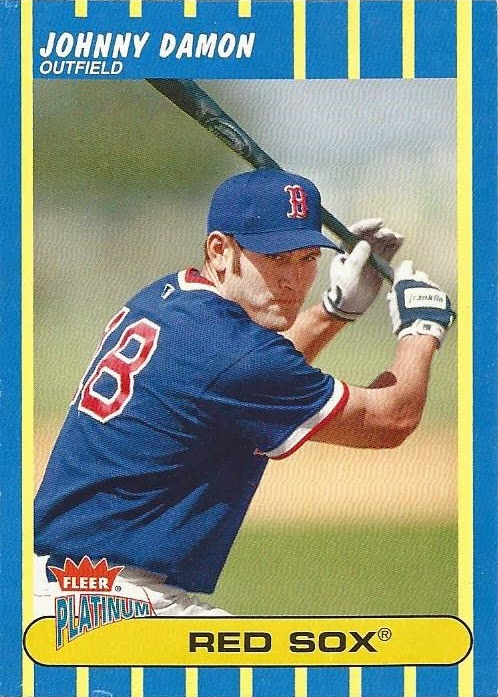 Here's another example of that, in the form of a pre-beard Johnny Damon.  I forgot to scan the back of this card, but it had a great '80s Fleer vibe.  So much so that I liked the back of the card as much as the front. 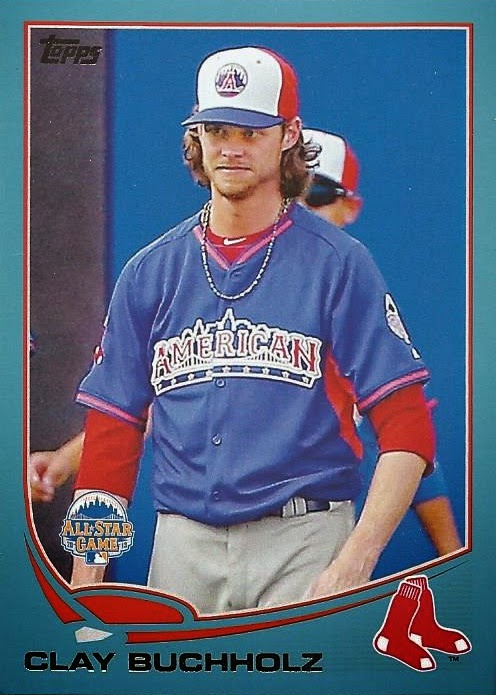 I've stated this many times, but I'm a total sucker for the colored parallels that Topps foisted upon collectors the past few years.  Boston is going to need a solid year out of Clay Buchholz in 2015, and I can't honestly say I'm that optimistic.  He's shown top-of-the-rotation stuff for months at a time during his career so far, but can never seem to stay healthy for even the majority of a season. 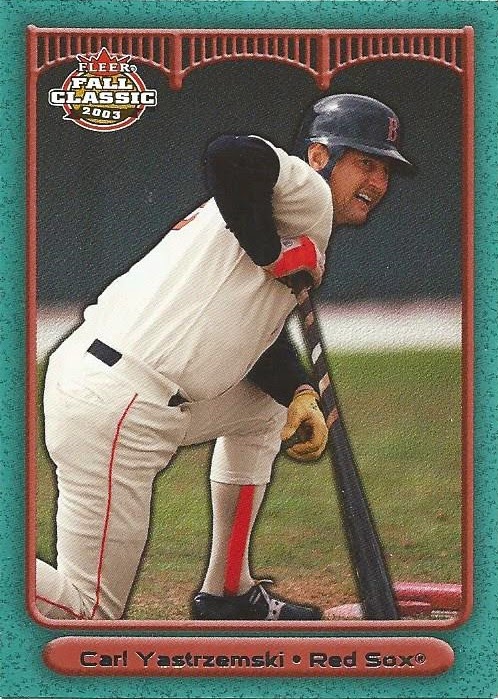 Here's one from a set I had no idea existed, 2003 Fleer Fall Classic.  I'm up to around 70 or so Yaz cards in my cataloged collection, and this is the first time I've seen this particular image.  How refreshing! Sorry, but the Gold parallels in 2015 Topps can't hold a candle to this.  I'm glad I've got one of the 2,014 copies of this card that exist out there.  Now, to wrap things up, since we're talking parallels... 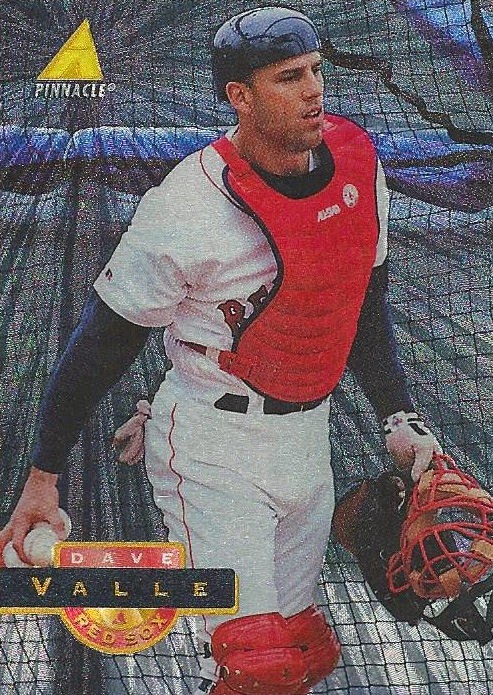 The 1994 Pinnacle Museum Collection Dufex cards (and their Rink Collection hockey counterparts) are some of my absolute favorite parallels of all-time.  I love the way these look, and they bring back a lot of memories having hit the market when I was 11-12 years old.  This might be my favorite of all the cards Mark included in this PWE.  Dave Valle, who'd have thought?

Mark, thanks again buddy!  What a great grouping of cards.  I think it goes without saying at this point...expect another envelope soon...
Posted by shoeboxlegends at 9:15 PM