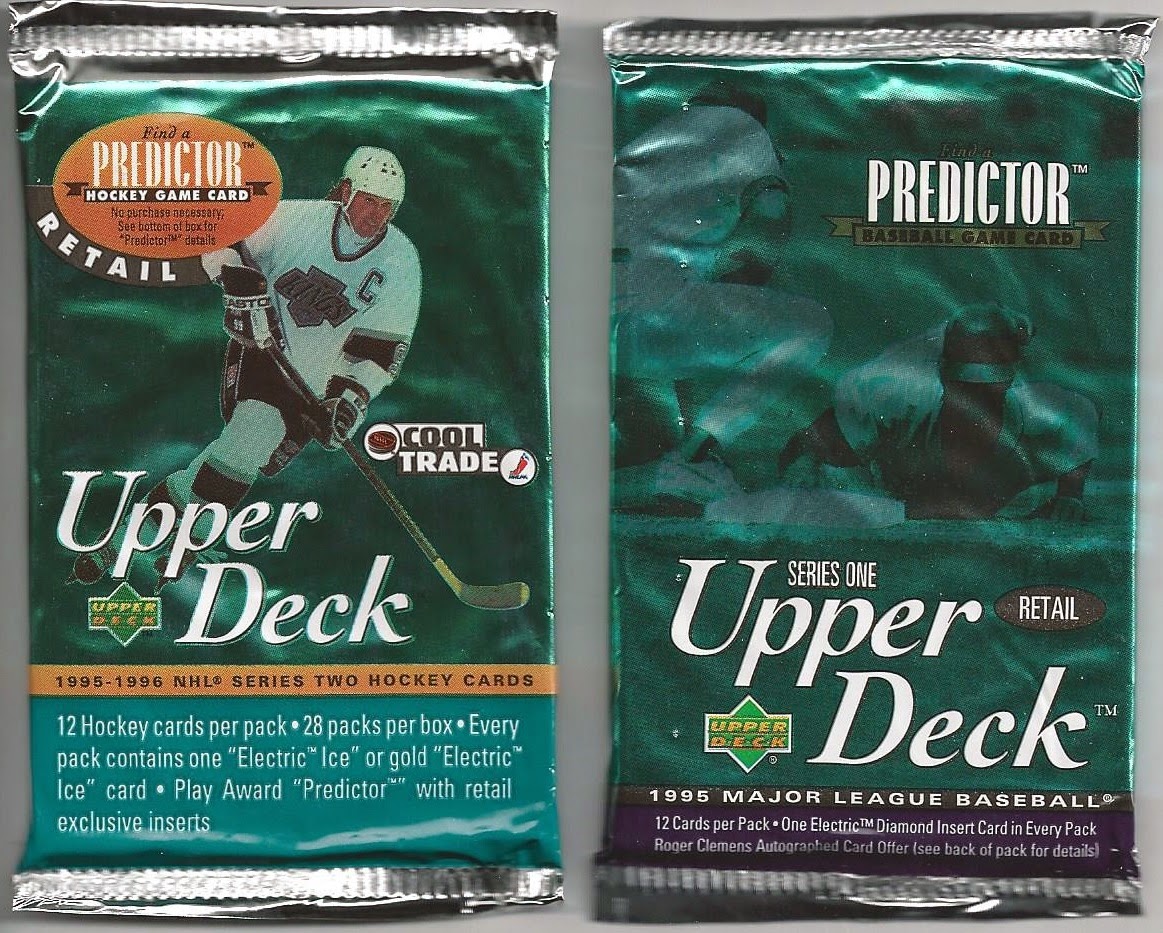 I'm slowly working my way through retail boxes of both 1995 Upper Deck Series 2 hockey and 1995 Upper Deck Series 1 baseball.  Very similar designs, 12 cards per pack each, I figured it would make for an interesting post to pit the two sports against each other and see which pack comes out on top.  If nothing else, maybe you're a baseball fan and will see a hockey card you like, or vice versa.  12 cards per pack, so 12 points up for grabs.  Let's hope we don't get a tie... 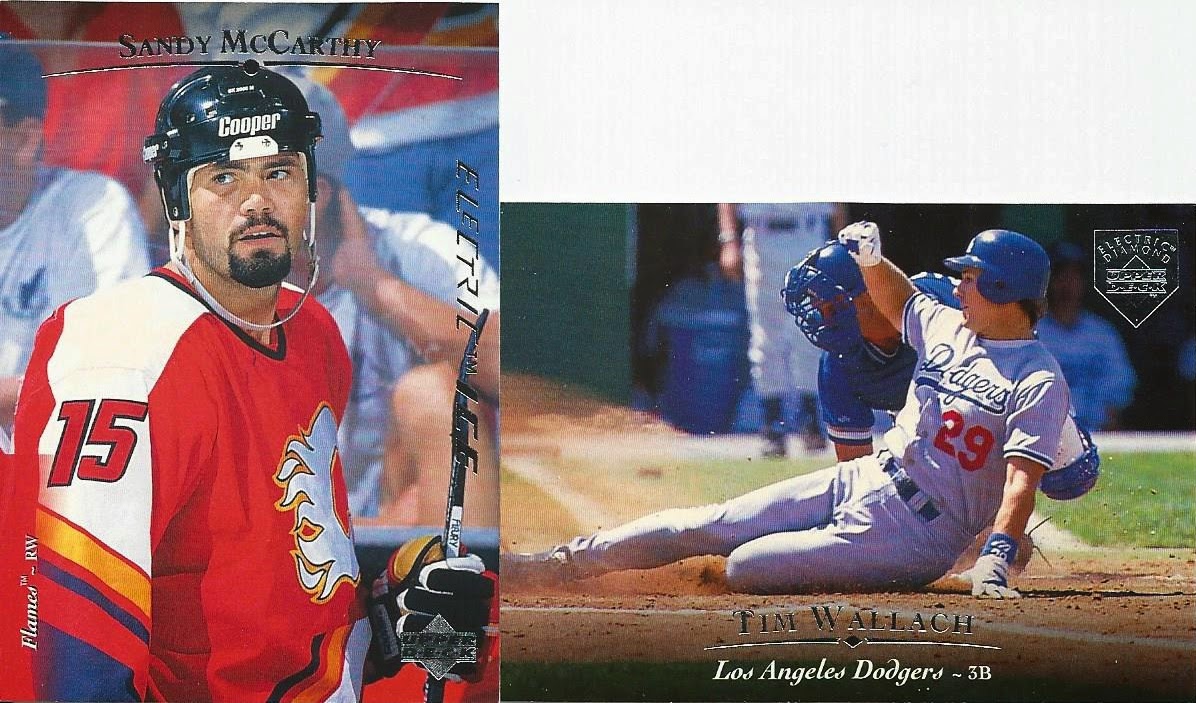 Starting things off is each pack's mandatory parallel card.  Nothing too spectacular here if I'm being honest.  Sandy McCarthy certainly looks like a man I wouldn't want to offend, but I think I have to go with the nice, sunny play at the plate and award the first point to the baseball pack.  This is not a good start for the hockey pack.  Since it's Series 2 there's a little less star power, and typically some set filler crap towards the end of each pack, so I think it needs to get out to an early lead to stand a chance against Series 1 baseball. 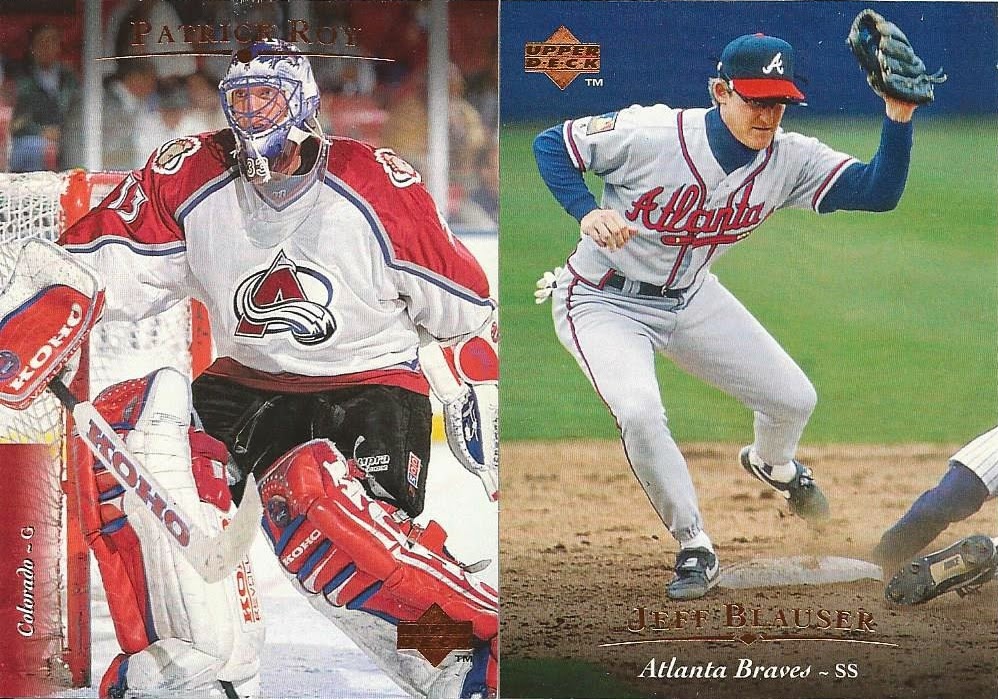 Hockey comes right back to tie it up.  Certainly one of the greatest goaltenders of all time in Patrick Roy, and a very nice photograph from his Avalanche days.  Jeff Blauser didn't stand a chance. 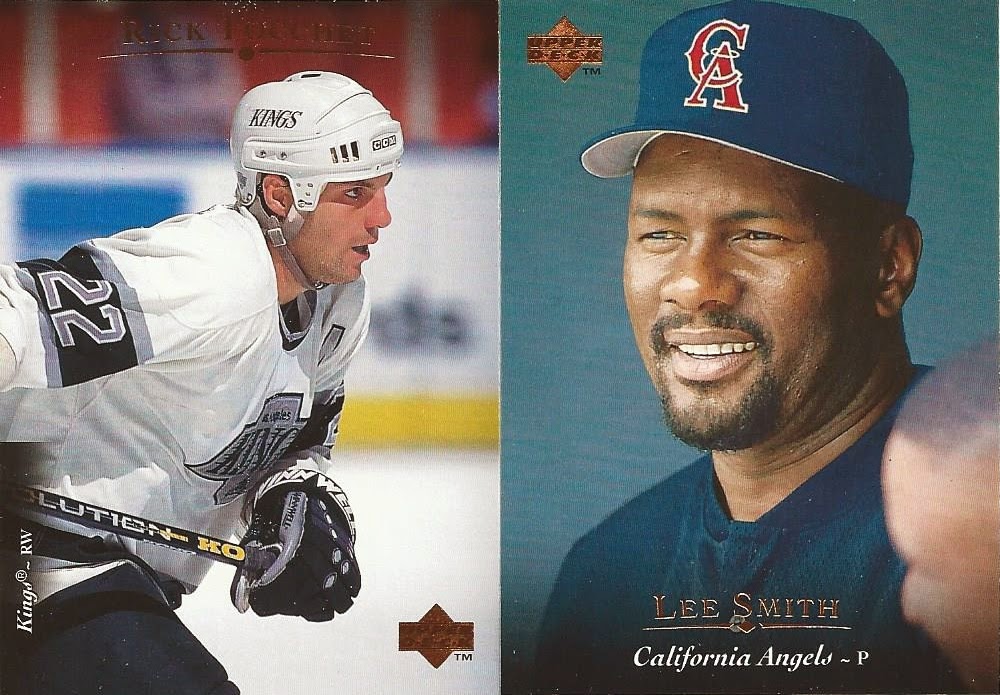 I've got the baseball pack winning out here.  I like the portrait of Lee Smith, and I don't typically associate him with the Angels.  Plus, Rick Tocchet lost some of his glossy surface along the top as a result of being stuck to the back of Patrick Roy's card.  Baseball takes the lead 2-1. 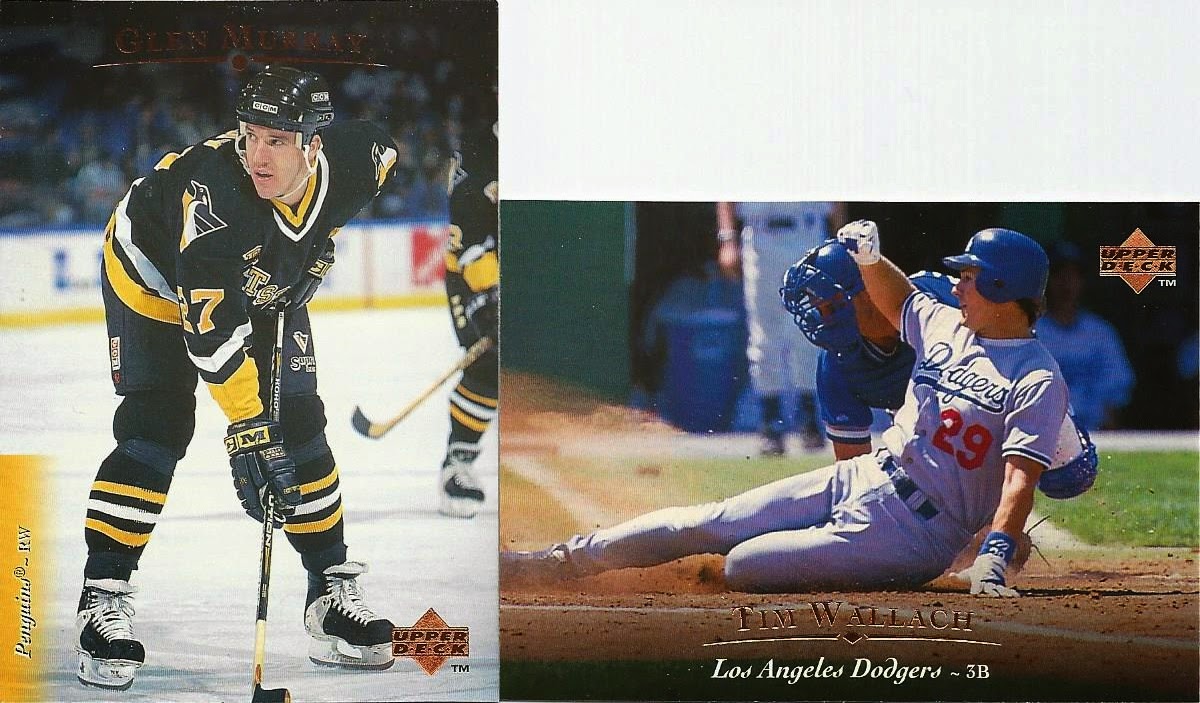 Seeing Glen Murray in anything but a Bruins sweater seems odd to me.  Interesting enough to beat out the very same Tim Wallach image that kicked off the pack.  Hockey ties it at 2. 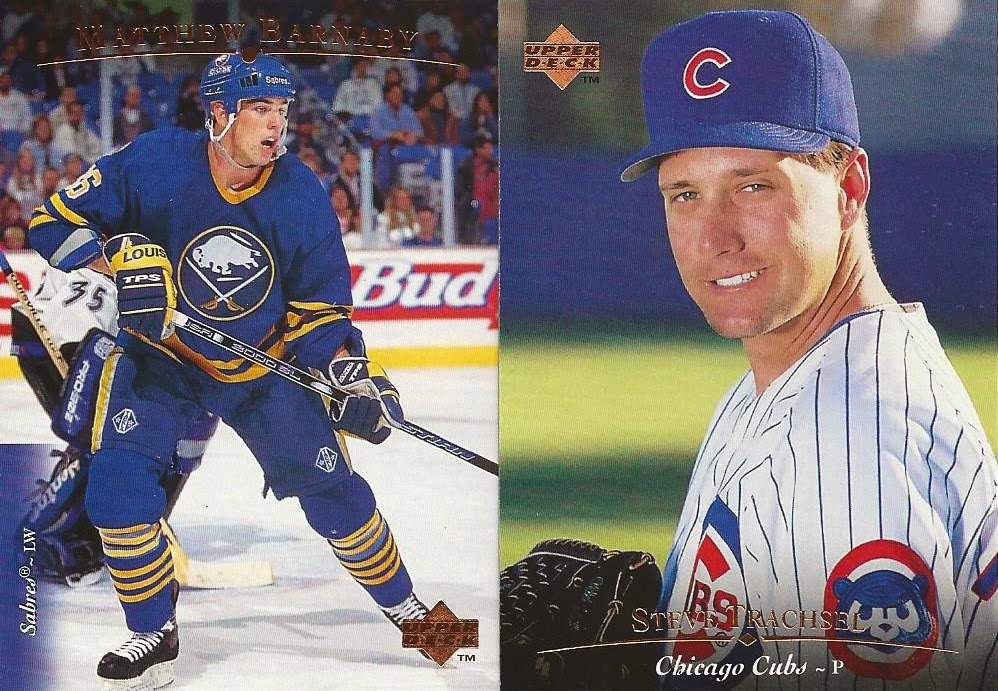 One of the least interesting match-ups in the pack.  Matthew Barnaby never did much for me as a hockey fan, so I'll give this one to Steve Trachsel and the baseball pack on account of that awesome Cubs patch on his sleeve. 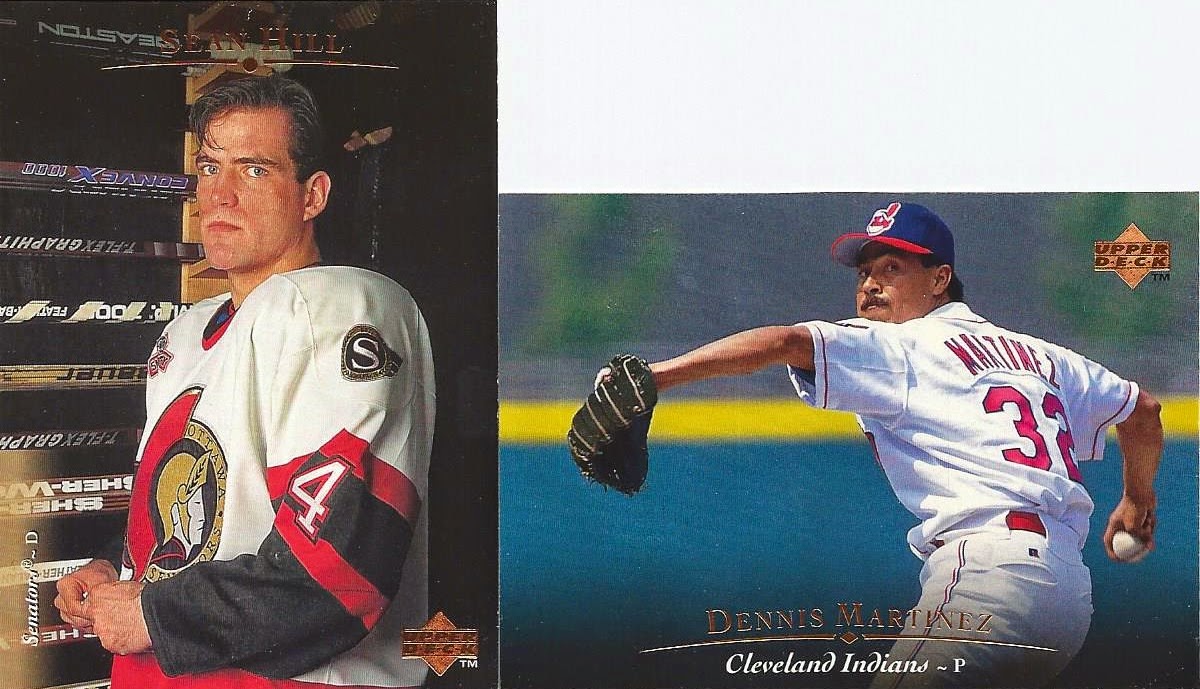 The hockey pack comes right back and knots the score at 3.  The horizontal shot of Denny Martinez isn't half bad, but I like the rare appearance of a stick rack on cardboard so I'm awarding this round to Sean Hill of the Ottawa Senators. 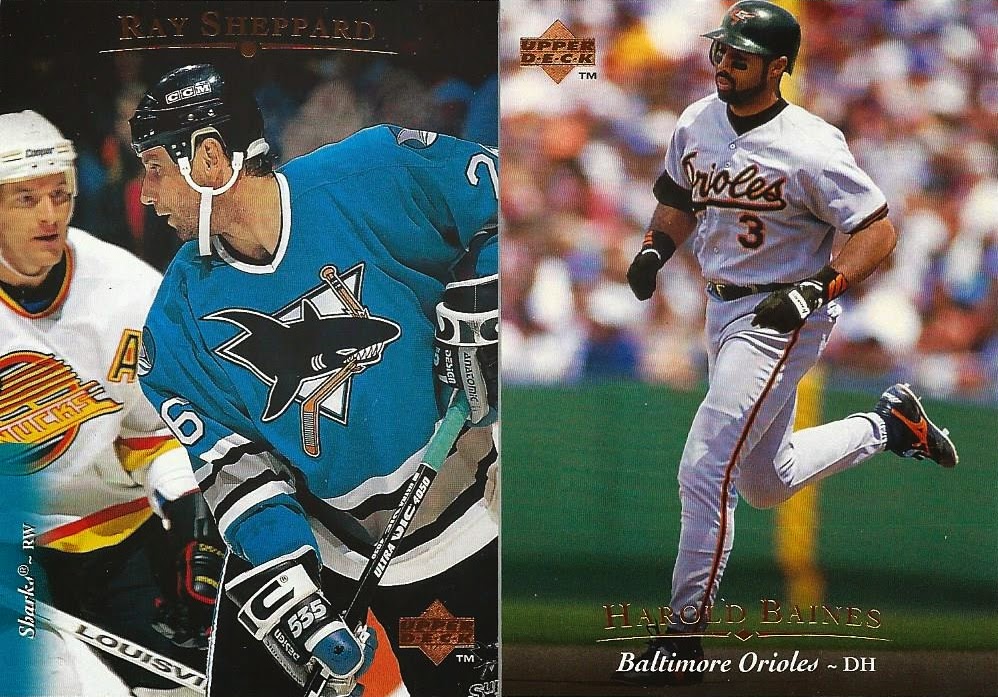 Both of these guys enjoyed pretty lengthy and successful careers, but I have to give the edge to Harold Baines trotting the bases here.  Baseball jumps back in front 4-3. 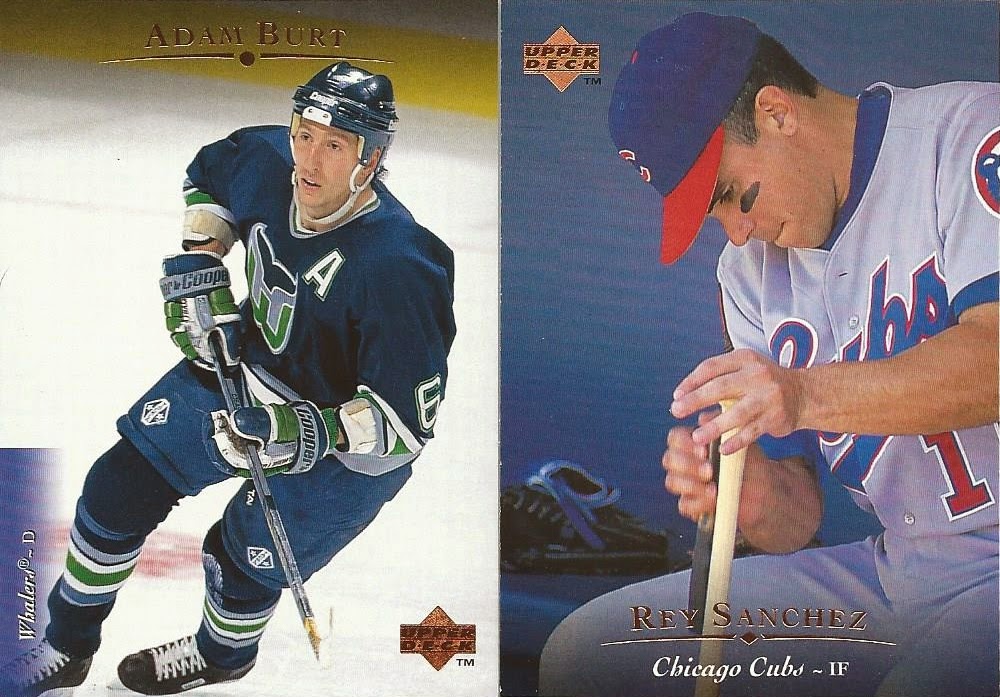 Since this is my blog, I'm applying my own personal bias when judging these cards.  Any Hartford Whalers card is practically a shoe-in for the win, and that is indeed the case here.  We're 2/3 of the way through the packs and all tied up at 4 points each. 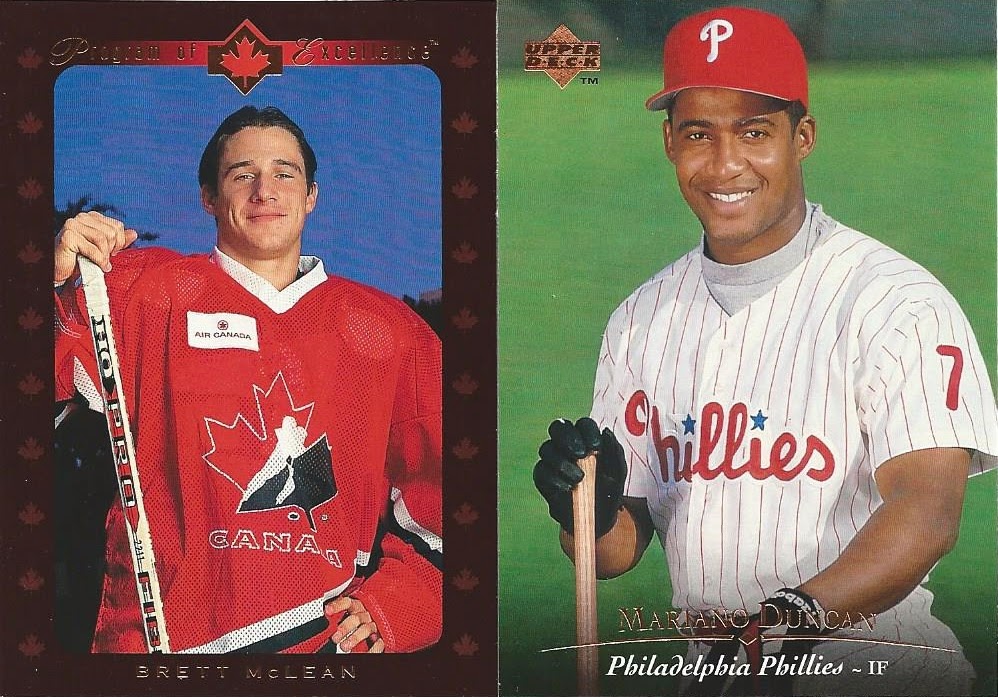 Here's where the hockey pack is going to start taking a dip.  Brett McLean actually did log quite a bit of NHL playing time in the end, but I couldn't tell you one thing about the guy.  At least the Mariano Duncan card reminds me of a time when there wasn't 4' of snow across my lawn.  Baseball pulls in front with 3 cards to go, it's going to take a miracle for hockey to win at this point. 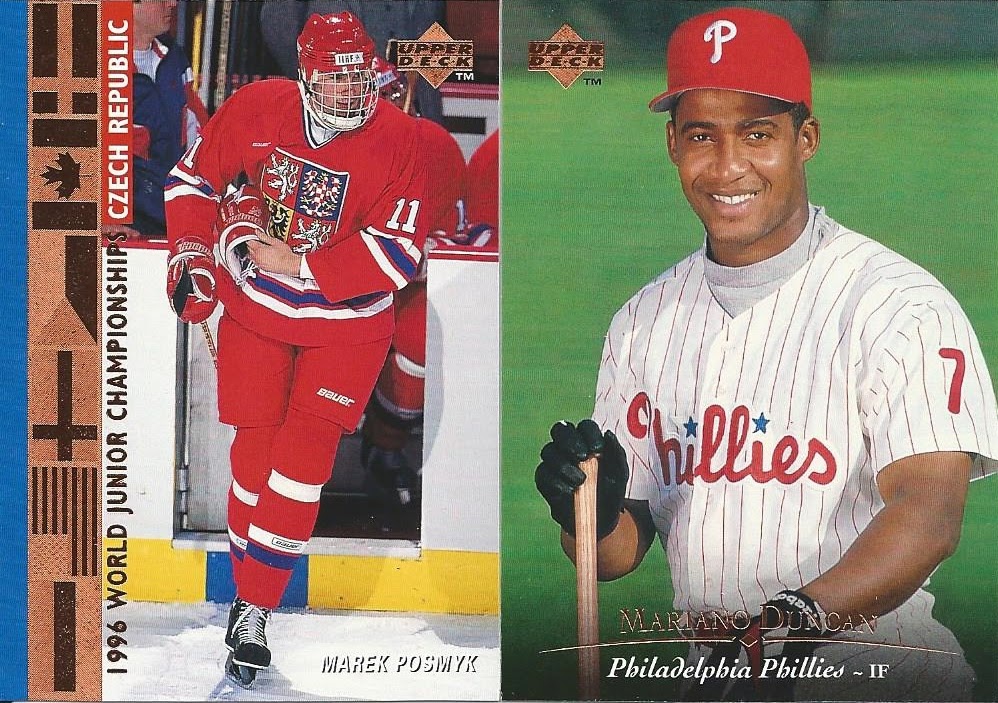 Marek Posmyk's NHL career consists of 19 total games played with the Tampa Bay Lightning.  Quite frankly, this card sucks.  One of the only things I would have ever chosen it over would be a duplicate in the same pack, and as fate would have it that's how the cards landed.  Maybe hockey has a fighting chance after all, tied at 5 a piece with 2 cards to go... 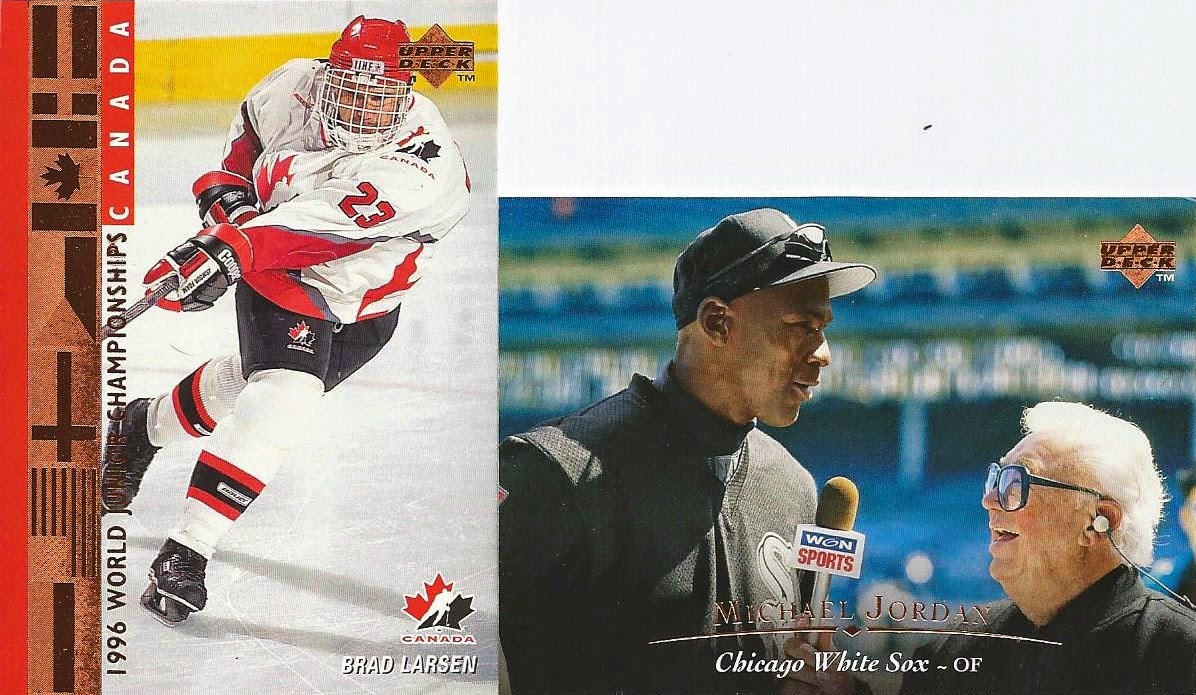 Baseball with a big blow, hockey is stumbling on the ropes at this point.  A World Juniors subset card of Brad Larsen, who has less than 300 NHL games on his resume, vs. one of the greatest base set cards of the mid-90s in my humble opinion.  The greatest basketball player of all time sharing a cardboard square with Harry Caray.  I don't believe there's a single card in the Series 2 hockey set that could have topped this one.  Very happy that I pulled a copy of it from my box. 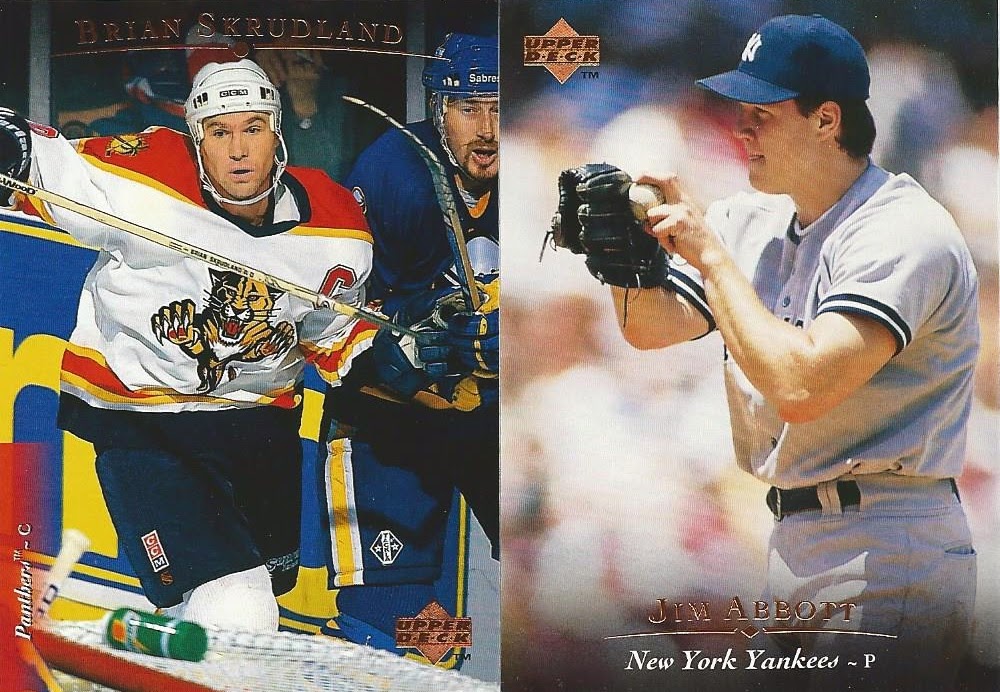 Baseball steps up and delivers the knockout blow.  A generic photo of the Florida Panthers' captain can't stand up to one of the most inspirational athletes in the history of sports. 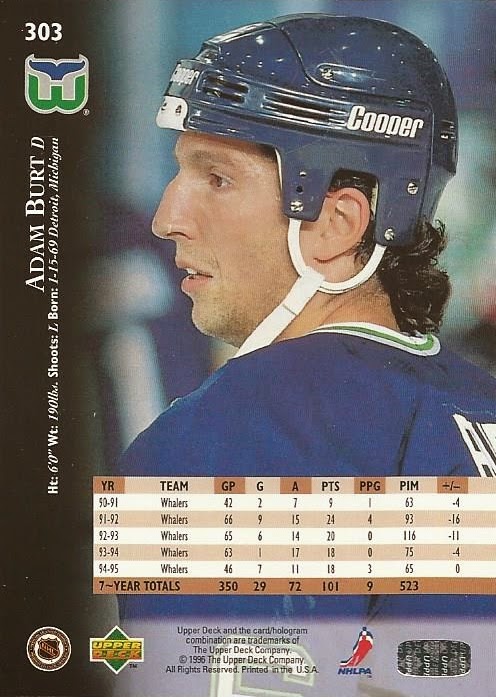 Well, that's a wrap.  Baseball wins this round 7-5.  A valiant effort from the hockey pack, but in the end even Adam Burt's beak/mullet combo wasn't enough to put it over the top...
Posted by shoeboxlegends at 9:16 AM

Interesting pack war. Not that it would've changed the outcome, but if I'm hosting, Blauser for the win!

Dude. You should have called the match after that MJ/Caray card was introduced into the fray. That's like an atom bomb of horizontal card greatness!!!

I would have thought hockey would win easily but no. Underwhelming pack. I do love the Jordan/Caray.

I'd have scored it 8-4.... Dennis "El Presidente" Martinez trumps just about anyone in my book.

95 UD Baseball is among the greats. This match was stacked against hockey from the get-go.