It's time for another installment of Shiny Cardboard, featuring...you guessed it...shiny cardboard!  Today we have a really shiny card featuring the man who was the man at least for a short while back in the late 1990s, Sammy Sosa! 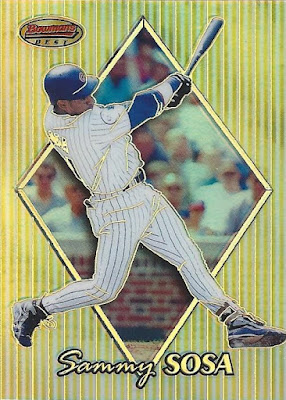 Yep, it's my latest addition from the 1999 Bowman's Best set, refractor style!  I got turned onto these beauties from a YouTube video a couple of months back, and have been on the hunt for cheap examples since.  At 400 copies each, they're rare enough to be fun to hunt, but not so rare that they are impossibly frustrating to find out there.

I just started the 30 for 30 "Long Gone Summer" documentary yesterday, and while I only made it about 15 minutes in due to a work emergency I can't wait to get back to it.  The early portion that I saw largely focused on Mark McGwire, but I know Sammy Sosa is coming as well.

As for my stance on their historic home run race...let's just say that I personally feel that Roger Maris and Hank Aaron are the true single season and career home run kings.  With that being said, I've mellowed out a lot as I've gotten older, and guys like Sosa/McGwire/Bonds don't really bother me like they did 15-20 years ago.  Like it or not, tainted or not, this is what baseball revolved around for one summer there in the late '90s.  That home run race was historic, and as a high schooler at the time I absolutely remember seeing each highlight blast, and checking Sportscenter each morning that summer to see if anyone had clubbed one the night prior.

In retrospect, were we naive and did we have the wool pulled over our eyes as fans?  Sure, I'm not disputing that.  For better or worse though, that home run race happened, and so these days I actually want a couple of Sosa and McGwire cards in my collection just to remind me of that summer of my sophomore year in high school. 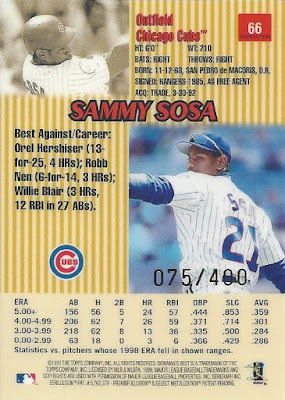 Here's the back, you can see the serial-numbering there at the bottom of the color photograph.

While I was at it though, and because it made perfect sense to pair them, I bid on and won an auction for Sammy's "Performers" subset refractor from this same release: 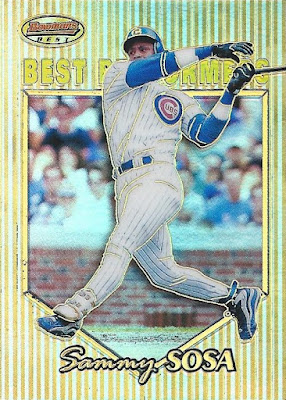 I think I like this one even better than the base card.  It looks absolutely amazing in hand, and the write-up on the back... 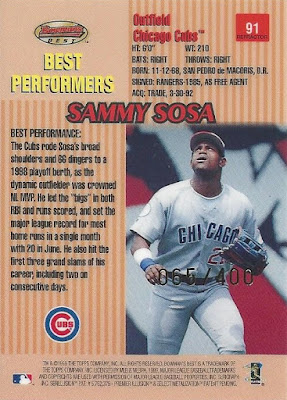 ...is perfect, as it mentions Sosa's 66-HR campaign in 1998 specifically.  This one is serial-numbered to /400 as well, as all standard refractors are in this set.

With these two officially tallied, I'm now up to five of these refractors in my collection.  I've got a couple more inbound though, so you can expect to see this release featured in at least one or two more Shiny Cardboard posts at some point. 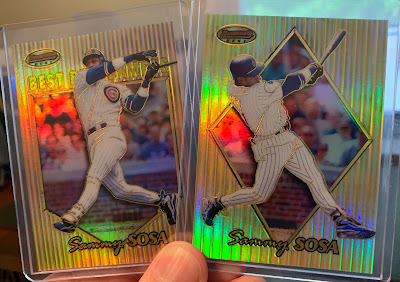 I don't think scans do these cards justice at all, so here's a pic I snapped with my phone to give you a better idea of just how well these guys catch the light.  Simply stunning.  The attention to detail is really noticeable, with Sammy's shoelaces even being painstakingly etched on the base refractor.

These are so much fun, and honestly other than a 1990 Topps buyback RC for my '90 buyback set, and maybe a copy of his '90 Leaf rookie, this is really all the Sammy that my little old collection needs.

Thanks as always for stopping by, and stay safe!
Posted by shoeboxlegends at 5:30 PM

Love 90's shine! By the way... thank you so much for those awesome autographs. Wrote my thank you post here: