Buybacks on Ice - More from the Inaugural Upper Deck Set

These ten come from the same large lot as the ones in the last post, acquired at a price point that was well below $1 each... 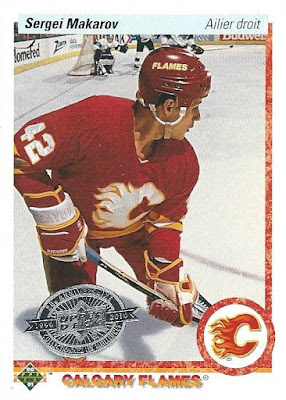 Here's a really interesting one to start things off.  For those who don't know, there was some controversy when a 31-year-old Makarov won the Calder Trophy for Rookie of the Year in 1989-90.  True, it was his first year in the NHL, as he had been permitted to leave the Soviet Union, but he'd played professionally throughout the '80s.  His winning the Calder resulted in an eligibility change that now requires a player to be 26 years old or younger in order to be able to receive the award.

Pretty cool to have this Makarov "RC" in buyback format, given the significance that his first season had on the Calder Trophy alone. 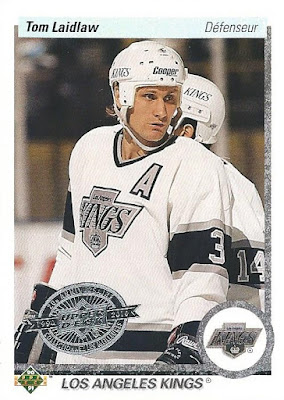 1989-90 was Tom Laidlaw's final NHL season, so this is actually a "sunset" card.  After his hockey career wound down he became a motivational speaker, and also appeared as a contestant on the Survivor television show.  True story. 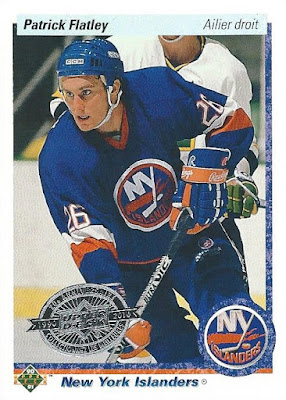 Patrick Flatley spent the latter half of the '80s and the first half of the '90s with the Islanders.  1990-91 was actually his second and final 20-goal season.  Other than that, not much to say about this card, as it's not exactly one of the more interesting ones on the checklist as this iconic set goes. 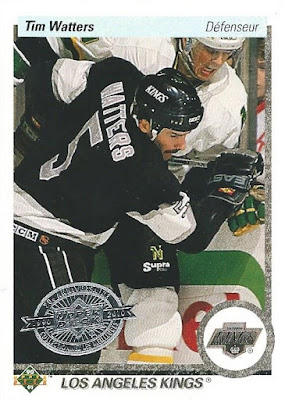 Kings defenseman Tim Watters is next up.  Watters was known as a stay-at-home defenseman who was not flashy, but obviously provided a lot of value.  You don't last 15+ years and 700+ games in the National Hockey League without bringing some talent to the table. 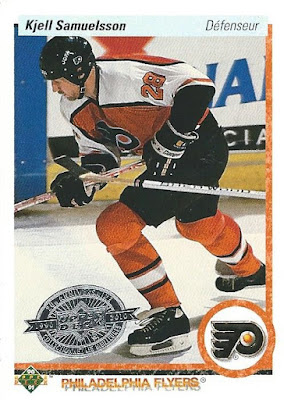 Like Sergei Makarov, defenseman Kjell Samuelsson began his NHL career at a relatively late age.  Kjell had been playing professionally in Sweden for years before making his NHL debut at age 26. 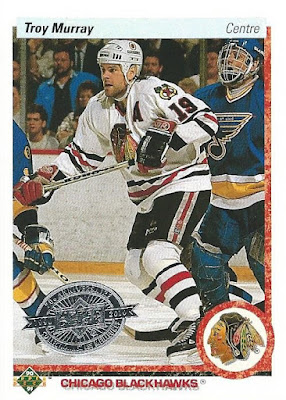 Did you know that Troy Murray had a 99-point season with the Blackhawks back in the mid-1980s?!?!  I don't believe I knew that, or if I ever did had long forgotten it.  Too bad he couldn't have notched just one more assist that year to be able to say that he had a 100-point NHL season. 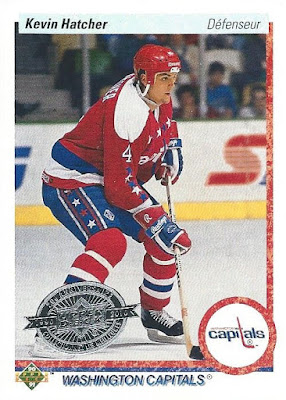 Here's a cool one, mainly because I already had the 20th Anniversary buyback of Kevin's young brother Derian.  Nice to have the pair of brothers in buyback format, both of whom are inducted into the United States Hockey Hall of Fame! 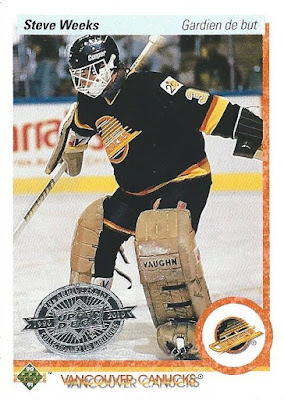 Steve Weeks was the second string goaltender for my beloved Hartford Whalers throughout a good portion of the '80s.  He doesn't have a whole lot of Whalers card representation though, in fact offhand I want to say his only Whalers cards are from the team-issued Junior Whalers releases possibly. 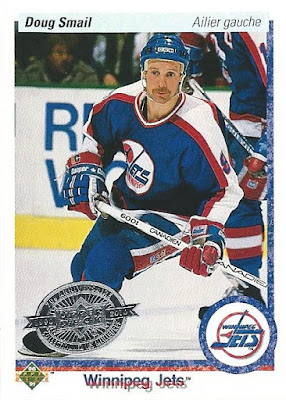 This one is a nice addition for me personally, because it just so happens that Doug Smail shares my birthday!  September 2nd isn't exactly chock full of stars as far as "athletes born on this day" lists go, so I'll take what I can get.

Last but not least... 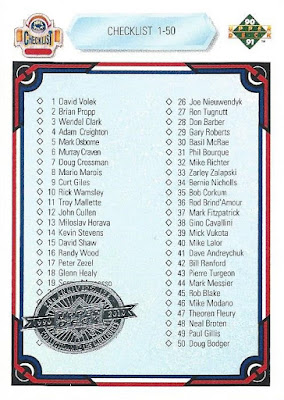 ...a checklist.  Sort of an anti-climactic way to end today's round of ten I suppose.  Hey, every card in the set got the buyback treatment for this program in 2010-11, so I expected to find at least a couple of these among the cards in my large lot.

That's a wrap for today, thanks as always for stopping by.  I'm up to quite a few of these 20th Anniversary buybacks now, 38 in fact, so I decided to create a virtual album for them.  You can check out the whole batch here if you're interested...
Posted by shoeboxlegends at 6:00 PM

I'll never get tired of seeing those team-colored marble borders. You're not planning some sort of hockey buyback frankenset project, are you? ;)

Is Flatley related to the dancer?

Hey same birthday as me, that's pretty cool! Smail's career was over before I ever got into hockey so as far as 9/2 guys go, Jason Blake was the most familiar to me.

Cool cards...especially that first one. Good stuff and a nice set to get buybacks from.