Still going strong on my goal of posting every single day during the month of July!  Let's keep it going with a PWE that showed up a short while back from my hobby friend Douglas of Sportscards from the Dollar Store! 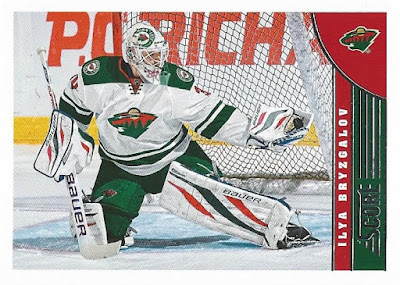 The catalyst behind this particular PWE was that Douglas had opened even more 2013-14 Panini Rookie Anthology (I swear I've never seen a collector rip as much of any one product as Douglas has of that set!).  As usual, he was kind enough to check my want list against the Score "update" cards that he pulled, which were available in those Rookie Anthology packs only. 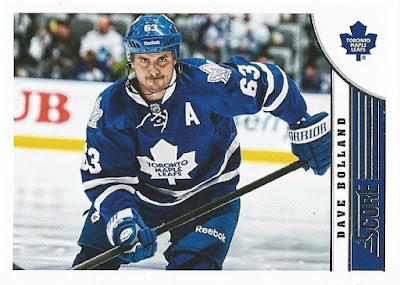 As it so happens, he hit on a pair of needs on that front, with Ilya Bryzgalov and Dave Bolland here.  Pretty remarkable that he pulled these two needs, given how few cards I'm down to needing now in my pursuit of the set.  In fact, let's take a look here...for the standard set I'm at 649/650, these "update" cards I'm at 34/35, and the "update" Hot Rookies I'm done, at 65/65.

Yep, thanks in large part to Douglas' generosity over the years, I'm just two cards shy of completing this entire 750 card beast of a set! 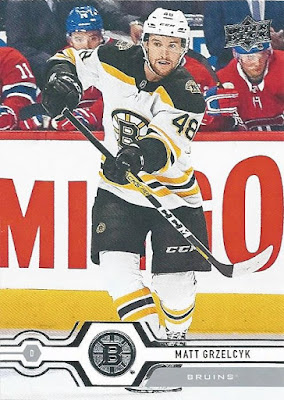 From this year's flagship Upper Deck set, local guy Matt Grzelcyk was included as a throw-in.  I think this might be my first card of the Bruins defenseman, pretty cool. 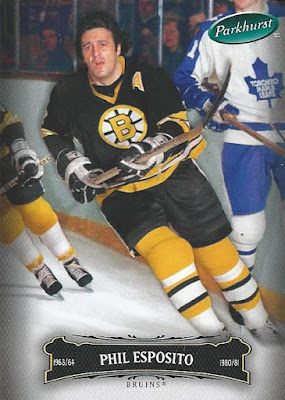 Also thrown in with the Score cards was a smattering of cards from this awesome Parkhurst set that's now coming up on 15 years old.  While I've never really gone out of my way to track many of these down (save a few of the on-card autographs), I love the set and have held on to any and all cards from it that I came across over the years. 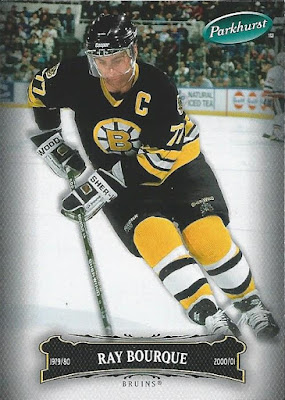 Douglas hooked me up with a bunch of Bruins legends this time around.  A couple of them were dupes and were boxed up for one of my bulk deliveries to Billy Kingsley, but all the cards shown in this post were new to me and remained behind in my collection. 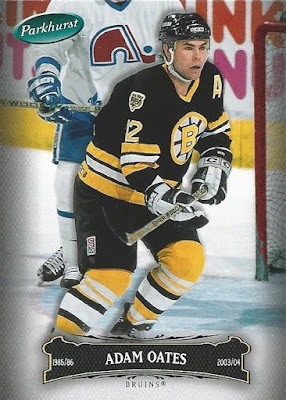 With an amazing base card design and great on-card autographs, this is one of the few relatively modern products that I could see myself busting an entire box of someday. 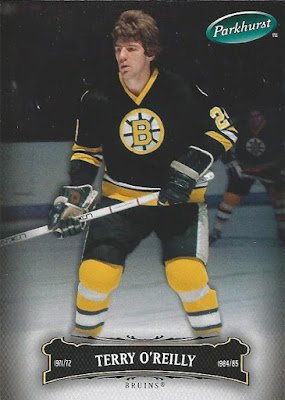 While guys like Bourque, Esposito, and O'Reilly here will always be most remembered as Bruins, there were also some slightly more obscure names on the checklist... 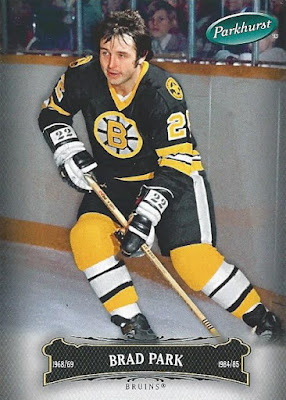 ...like Brad Park, who I associate primarily with the New York Rangers (even though he played many years in Boston)... 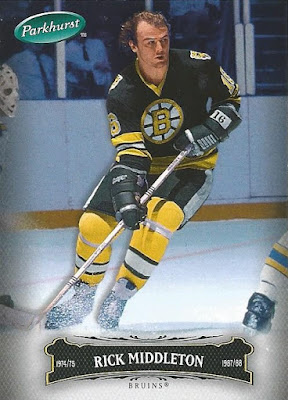 ...and Rick Middleton, who I do associate most with the Bruins, but who isn't a member of the Hockey HOF or anything like that.  Great grouping of cards here, for sure! 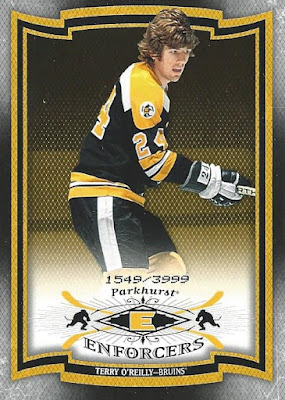 Oh, and as if all that wasn't enough for a completely out of the blue and unexpected PWE, Douglas also threw in this Terry O'Reilly from the Enforcers subset.  The high numbered portion of the release included a few subsets like this one, with all cards being serial-numbered.  The cherry Terry on top of this really great PWE sundae!

Douglas, thanks so much for this great batch of cardboard.  For as long as I collect, I will forever and always think of you whenever I see the 2013-14 Score set.  You've pretty much single-handedly put me within striking distance of finishing it off.  Thank you!

To everyone else, thanks as always for stopping by.  I've got more new content queued up for the weekend, so I hope you'll visit again soon!
Posted by shoeboxlegends at 8:40 PM

Congrats on your near-completion of the 750-card set. Not easy.

The Adam Oates edges out the Ray Bourque for my vote. Mainly because of that goofy Nordiques logo in the background.

(No helmet on a hockey player always seems weird / extremely dangerous to me. So glad they mandate one now.)

Parkhurst had a numbered enforcers subset? I'm gonna have to see if there are any Sharks in that subset.