Since I've avoided retail stores for many months now (and I hear they're bereft of cards anyway), I've relied on the internet to provide some enjoyment when I get the itch to rip a pack while dealing with COVID.  Tonight's post features a pack of cards that I actually purchased long before the Stadium Club blaster that I just wrapped up posting on.

I get Topps' daily (sometimes more frequent, lay off a bit Topps!) email updates, where they peddle the latest Project 2020 cards and other wares.  Generally I ignore them outright, but all the way back in April or May I believe it was, I saw a product that looked appealing to me.  Topps was reviving the classic T206 mini set with a brand new 2020 release, sold online in a few different waves of 50 cards each.

You get 10 mini cards in a pack for $14.99.  I picked up two packs, and after applying a coupon my total was around $27.  Fast forward to last week, and this arrived in the mail: 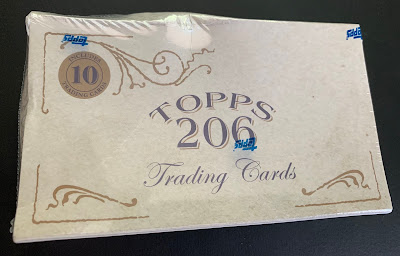 Alright, what can I say about this?  I fully realize that I'm not exactly a big spender when it comes to Topps retail or online purchases, but I'd hope that they'd package cards for any customer just a bit better than this?  I assumed my purchase would come in a small flat rate box or something of the like, but no.  My two packs came loosely floating around in a bubble mailer, which had been fairly well crushed in its travels.

Here's an overhead look at this first pack, totally mangled.  Thankfully I'm not someone who cares about keeping packaging around after opening it, so these were headed to the recycle bin anyway.  Still, bad look here Topps.

The good news is that the small silver package that contained my ten mini cards seemed to be undamaged in any way.  Had this been banged up or had the cards inside suffered any real damage due to the shipping and handling snafu I'd have been really upset, but thankfully that was not the case.

Within each pack, from what I've seen anyway, you typically get at least seven standard base minis, and at least two Piedmont back minis.  There are back variations that pay tribute to the many different back types that exist in the original T206 set.  I haven't researched the rarity of any particular back type other than a general awareness that the Piedmont ones are most prevalent of the variations at a couple per pack.

Anyway, I'll open the first of two packs in this post, and save the second one for a rainy day in the coming weeks.

As far as what I'd most like to pull?  Xander Bogaerts is in this series, of course I'd love to see one of those in here for my player collection.  Other than that, I'm probably more excited to pull minis of retired HOFers than current rookies, but I expect a mix of both. 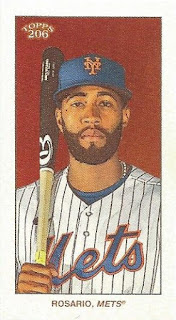 First card out of the pack is Amed Rosario of the Mets, a player I'm not all that familiar with other than the fact that he's the young full-time shortstop for New York, and has been the past couple of seasons.  30 doubles, 15 home runs and 70+ RBI last year, pretty good offensive numbers for the position.  This one will be sent off to one of my Mets-collecting buddies in the near future. 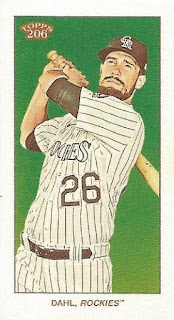 Next up, David Dahl of the Rockies, another NL player that I'm only marginally familiar with.  As you can see, these stay relatively faithful to the original T206 design, which isn't all that hard to do.  A mini card with an inset photo within a white frame, and player and team name at the bottom.  These first two just used solid color backgrounds, but like the original set that this one draws inspiration from, there are detailed backgrounds on some cards. 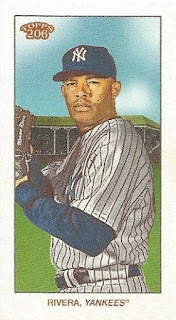 Like this Mo Rivera.  That's much more like it!  While I don't see either of those first two cards sticking around in my collection for long, I'll probably tuck this future HOFer in with the rest of my non-Red Sox mini cards for now. 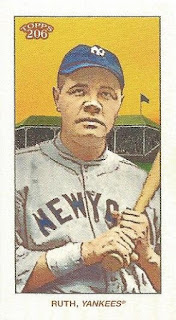 The next card is even better.  I'll absolutely be hanging onto this Babe Ruth, even if the background is nearly identical to the Rivera (just with a different color sky, and a flag thrown in for good measure).  To me, the old-time players just look so much better as far as this release goes, which makes sense I suppose. 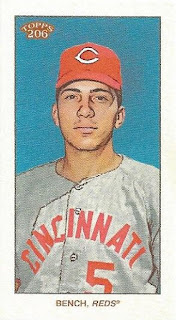 Next up, another keeper with the lone Cincinnati Red in the first wave of this set, Johnny Bench.  Now's probably a good time to take a peek at one of my gripes related to the set... 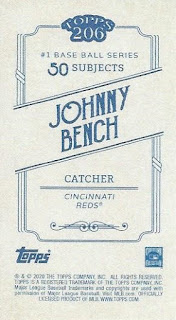 ...and that is a lack of card numbering.  Ugh.  As you can see, the only information you get on the back is the player's name, position and team, and then a note along the top indicating that it's from the first series of 50 subjects.  I'm really not sure why Topps couldn't have numbered these 1-50, and the next wave 51-100, and so on.  Oh well, I won't be chasing the set, just keeping a few select singles and enjoying the ripping, so I won't get hung up on it. 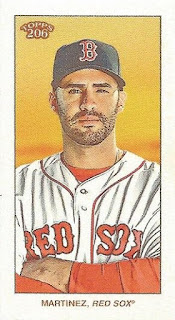 Really got on a great streak here, with four consecutive cards that are keepers for me.  That's honestly more than I was expecting out of this pack going in.  Can't wait to see JD and the rest of the Red Sox take the field shortly here to kick off this strange 2020 season! 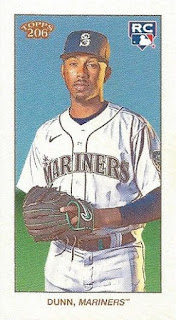 Back to some guys I'm not all that familiar with now.  I guess I can forgive myself for this one, as Justin Dunn's MLB experience consists of four starts for Seattle last year.  He looks like he performed very well though in that limited action (2.70 ERA), so I guess I can see Topps' rationale behind including him in this set. 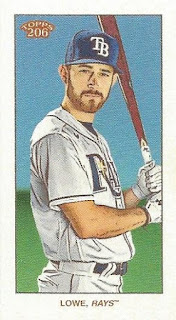 Here's Brandon Lowe of the Tampa Bay Rays.  We've gotten to the point in the pack where we have a couple of the alternate back versions.  Brandon here is a Piedmont back, and I'm grateful that we have the internet available because if you weren't aware of who this was... 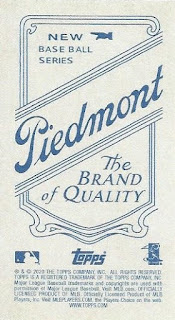 ...you'd have no way of knowing it by looking at this card.  Nowhere on these back variation cards, front or back, does it list the first name of the player depicted.  I'm just pointing this out, but not really giving Topps any grief over it, because the reality is that this is true to the original T206 cards these are based off of. 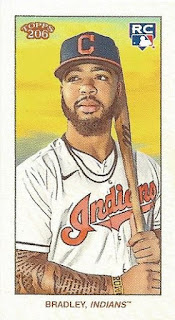 I'll be totally honest and admit that, since it's a Piedmont back, I had no idea who this was when I pulled the card.  Turns out it's Bobby Bradley, who swatted .178 over 15 games with Cleveland last year.  Alright then... 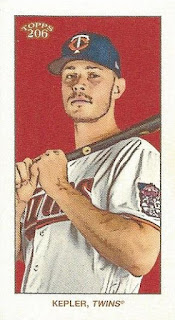 Final card in this first pack is Max Kepler of the Twins.  36 home runs and 90 runs batted in for this guy last year, pretty crazy.  He even made at least one MVP ballot.  This one is a rarer back parallel... 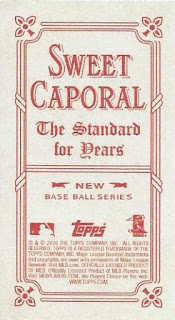 ...a Sweet Caporal back.  Again, not sure how rare these are but, like the three cards before it, this one is headed to my trade/giveaway stack I'd say.

So, there's my first look at Topps' 2020 206 set.  Was it worth the $13 and change that the pack set me back?  Absolutely not, but is it ever, and is that even the point?  As for how I feel about the set, I like it enough that I don't regret picking up the two packs that I did, but it doesn't do enough for me that I'll plan on purchasing any more from future "waves" of the product.  I'll most likely keep my eyes peeled for cheap Red Sox and retired stars on COMC whenever these make it there in the future, but that's about the extent of what I envision for these in my collection.

At some point I'll bust the other pack open and do one more post like this, but for now thanks for joining me on my journey through this first one!  Have a great weekend everyone!
Posted by shoeboxlegends at 6:00 PM

Sweet Caporal was big in Canada.

I like the look... but not the price. However... you're paying a few bucks for the thrill of opening a box/pack. Considering you pulled several cards you consider "keepers", I'd say you did okay.


It's a shame your cards arrived like that, but Topps is far from alone in the "Really? You shipped it like that?" category. I suspect that corporations have determined that the 'return on investment' is not there for reasonable packaging.

The cards seem pretty well executed, at least. I really don't get the appeal of different-back parallels, but then again I'm not a parallel collector or a tobacco card guy, so I'm not the intended target for this set.

FYI, Justin Dunn was one of two well-regarded prospects the Mets traded to Seattle in the Cano/Diaz deal... So if he pans out at all, there will much wailing and gnashing of teeth among the Mets faithful... not me, I thought it was a pretty good trade at the time.

Sadly, you're not the first person I've seen whose packs of these arrived in a caved-in package. Another example of Topps's frequent cluelessness. I doubt I'll get any T206 packs, but I'm definitely interested in seeing which singles I can find on the cheap on the secondary market.

Very nice design on these cards. It's too bad they had to place the team name in italics and add the registered symbol, though. (Minor gripe, but it sort of takes away from the old-timey feel.) Glad you got a few keepers!