Landed a really sweet new Sandy Koufax while sheltering in place these past few months, and want to take an opportunity to show it on the blog today as it's truly one of the more beautiful cards I've acquired in some time. 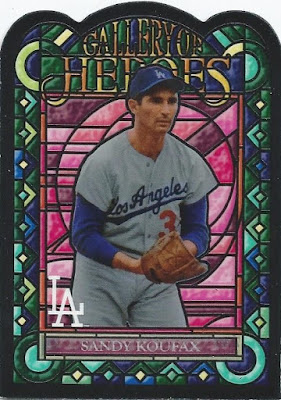 Love this one!  These Gallery of Heroes inserts are from the 2013 Topps Archives set, and pay tribute to the insert set of the same name that Topps produced for a few years beginning in the late '90s.  These are fashioned after the 1997 release in particular.  They're die-cut at the top and feature an acetate-type material, in order to give the semblance of a stained glass window.

These were relatively tough pulls back in 2013 as well, as the odds of landing one were 1:31 hobby packs.  A hobby box of 2013 Archives has just 24 packs, so you weren't even guaranteed one of these in a box necessarily.  Roughly speaking they were found about four per five hobby boxes.  The black borders take an absolute beating condition-wise, but if you aren't super picky you can still find these at a decent price.  I paid $6 with free shipping for Sandy here... 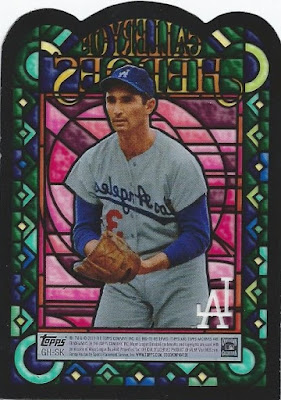 Here's the back which, given that the card is acetate, is basically just a mirror image of the front.

There are fifteen cards on the checklist for this insert set, featuring a mix of current (circa 2013) stars and retired legends.  To me, this is what makes this new revision of Gallery of Heroes so awesome, as the late '90s/early 2000s Gallery of Heroes inserts that Topps did across all sports only featured active players if I'm not mistaken.

Alright, all of that is nice and everything, but there's truly only one way to appreciate the sheer beauty of this card.  Put it in an UltraPro One Touch magnetic holder, and hold it up in the sunlight! 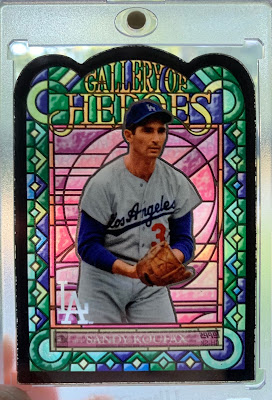 Wow!  Look at how that card just pops to life when back-lit.  If it wasn't for the fact that the Mike Trout is so expensive, and that I'd fear the sun would fade them over time, I'd love to acquire all 15 of these and make some type of window display for my home office/hobby room.

I think I can say with complete confidence that this is the most visually stunning card I've acquired for $6 or less in a long, long time.  If you're a fan of acetate baseball cards I cannot recommend this set enough.  If your favorite player or team is included in the short checklist go out and grab one now, you won't be disappointed.  With a little hunting you should be able to find 14 of the 15 subjects for $10-$15 each, or even less.

Mike Trout is the exception, as I mentioned.  A few weeks back two copies of his Gallery of Heroes insert went up for sale at the same time on eBay, both with some border chipping like you see on my Koufax here.  I made a play for one, but lost out when they each climbed above $40.  I guess if you're a Mike Trout collector you're probably used to paying that kind of premium, but I'm certainly not.

For now, I'm pleased and grateful to have Sandy here anyway.  I grabbed a couple more of these before I went on my newly announced spending hiatus, so I'll get around to posting some company for Sandy soon I'm sure.  In the meantime, thanks as always for stopping by!
Posted by shoeboxlegends at 3:33 PM

I pulled the Roberto Clemente from this set back when 2013 Archives hit the shelves, and it's still one of the better cards I've ever gotten out of a pack. They're simply stunning.

Beautiful card! All of the stained glass cads I've seen are fantastic, and Sandy Koufax in particular seems to have a lot of eye-catching cards.

Well, I think I know what card I'll be looking for next! Thanks for sharing.

A few years ago I was at a going out of business sale for a comic/collectible store, and I pulled one of these from an old pack of Gallery. Fortunately, I was sitting in my car when I ripped my pack because the first thing I did was hold it up in the sunlight and bask in its glory. :-D

I have this card!

One of the best inserts sets from the past decade... and it just happens to be a flashback set from the 90's. It's kinda sad... but a beautiful insert nonetheless.

I love all the Gallery of Heroes cards. There were a couple of insert sets of them in the late 90's that I am still chasing.