Here's another really cool box bottom card that I picked up a while back in my bid to acquire a bunch of Gretzky cards for a future "Top 99 of #99" card countdown here on the blog... 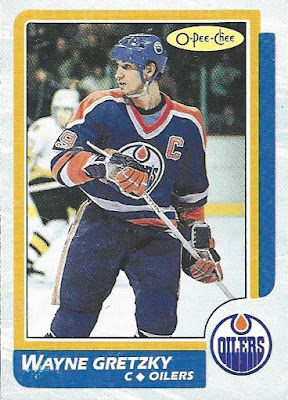 This particular card was cut from the bottom of an '86-87 O-Pee-Chee wax box.  In addition to featuring a different photo than Wayne's standard '86-87 Topps/O-Pee-Chee release, there's also a difference to the outer border of the card.  In the base set the borders are white, on these box bottoms they have a grey and white effect that looks almost like a sheet of ice. 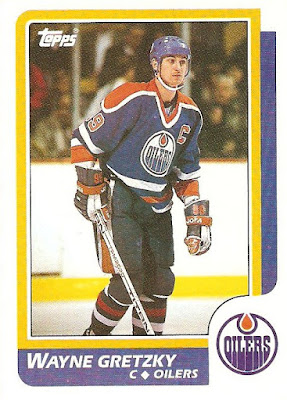 Here's Wayne's base card from the '86-87 Topps set for comparison's sake.  I don't yet have an O-Pee-Chee version of this card, but it's got the same design and photograph, just different branding in the upper left corner there.

I'm not sure if I prefer the box bottom or the standard card, both are really nice.  We'll call it a draw I suppose. 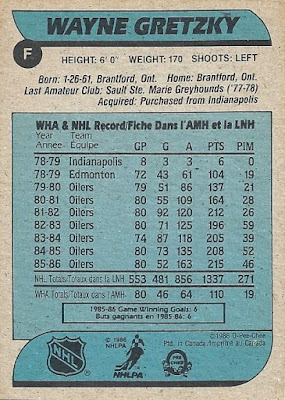 Here's the box bottom back, in typical fashion these are assigned card letters rather than numbers.  Complete career stats up to this point in time, including WHA totals!  No matter how many times I see a 200-point season, I'm still in awe.

Well, that's my latest Gretzky addition for you.  It always feels good to pick up any new cardboard of The Great One, but it feels especially good when I can land a new '80s card of Gretzky like this.

I vote for the box bottom. It's a more interesting photo.