In today's post, we'll finally get around to inducting a couple of basketball cards to the Cardboard Keepers collection.  I'm not a big basketball guy overall, but I have decided to try to pursue some significant cards of the best players across many different sports, and so finally have a couple that I feel are worth induction into this collection.  Let's get to it! 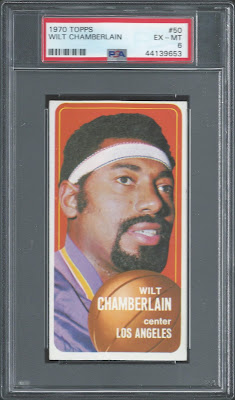 In the lead-off spot today is my very first card of an absolute legend of the game, Wilt Chamberlain!  This is actually a tall-boy format card from Topps' 1970-71 flagship basketball release, which is the same width as a standard, modern-day trading card, but taller.  Very fitting for basketball in particular.

An easy choice here for inclusion in this project.

Same goes for the second and final inductee in today's post! 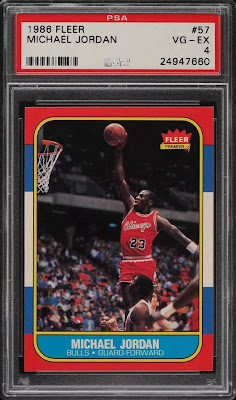 BAM!  If you've been following my blog throughout 2020 then you probably knew this was coming.  Arguably the greatest basketball player of all-time, and certainly on anyone's top 5 list.  By many standards, the most iconic single basketball card ever produced, though opinions obviously differ there.

When I started working out this Cardboard Keepers project in my mind, one of the big goals was to acquire some significant cards of greats in sports other than baseball and hockey in order to broaden my horizons and better round out my collection.  This exact card was one that I specifically had in mind from the outset.  I had to sell about three dozen graded cards over a period of weeks on eBay to raise the funds required, and made many trips to the post office, but finally this beautiful Jordan "RC" was mine.

It's my favorite basketball card by a country mile, and always will be.  It was only a matter of time before I selected it as a Cardboard Keeper.  Hell, it would make this list even if I were hanging onto only 20 non-baseball cards, forget 1,000!

Hard to argue with either of these cards, and I'm happy to have them be the first cards to represent the sport of basketball in this project overall.  I guess I need to get out there and find myself LeBron and Kobe cards at some point now, and I wouldn't mind a nice Dirk Nowitski either.

In the meantime, the non-baseball Cardboard Keepers collection is up to 23 cards in size now, and can be viewed here.  I've still got a long way to go, with 977 cards remaining to be selected.  I'll be back soon with the next card or group of cards for the project, but until then thanks as always for stopping by!
Posted by shoeboxlegends at 5:00 PM

I think you're jumping the gun on Dirk.

Yep, every one of those is a guy I'd like to add to this project someday for sure. A couple I have cards ready to go, just need to type up a post. Others I'm still seeking out. Great list!

If ANY card of LeBron, Kobe and Dirk will do, I can take care of them. And probably any other NBA you need.

If I owned a Jordan rookie... it'd be hands down my favorite basketball card.