Here's a few random hockey cards that I've added to my formal, organized collection in recent weeks.  None of these were necessarily interesting enough to warrant a post of their own, but as a group they're entertaining enough... 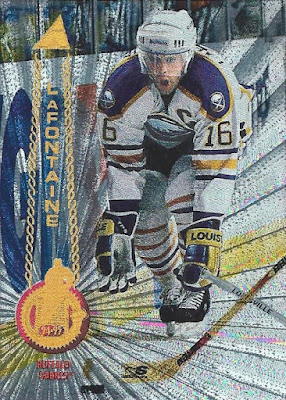 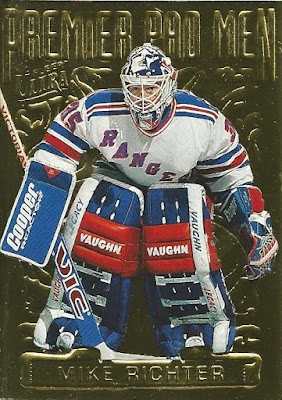 If you like gold cards, I'd imagine you'd be a fan of this Premier Pad Men insert from Fleer Ultra.  The '90s certainly were a decade of excess in many ways.  Sometimes that worked out well, sometimes not so well.  You be the judge here. 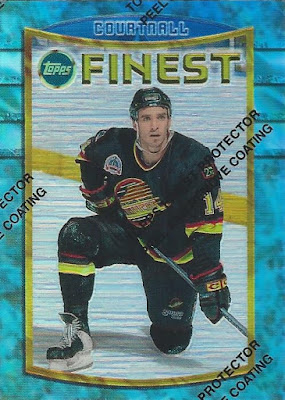 '90s Finest Refractors absolutely rule, regardless of the sport.  These '94-95 hockey versions in particular are just awesome.  The blue borders absolutely glow.  At just two per hobby box, these are tough little buggers to track down on the cheap.  I believe I paid a dollar even for this Geoff Courtnall, which is actually a steal. 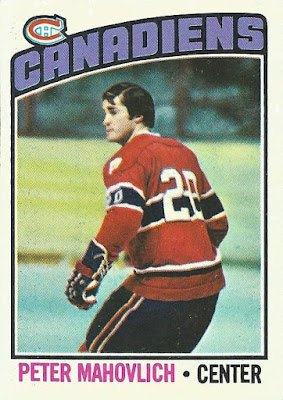 A nice, clean copy of Peter Mahovlich's 1976-77 Topps issue is next.  I believe this was quarter box fodder back in the day as well. 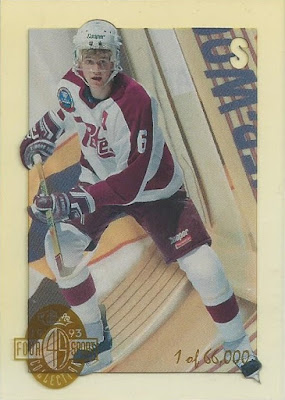 This Chris Pronger has "yellowed" a bit with age, but it's actually an acetate card.  I guess I was drawn to it because Chris was property of the Hartford Whalers when the card was released, but it doesn't do a whole lot for me these days. 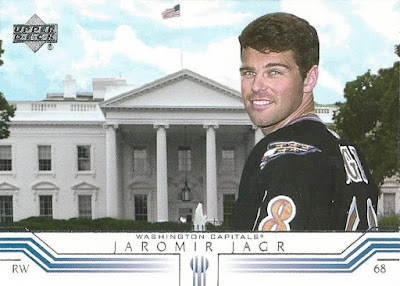 We'll close it out with a few singles from the 2001-02 Upper Deck set.  Many years ago I purchased either a complete or near complete (honestly not sure) set at a bargain price online.  It sat in the box in my closet for the longest time, until I decided to ship it off in one of my boxes to Billy Kingsley.

I did hold onto a select few singles from the set for my own collection though, like this great shot of Jaromir Jagr in front of the White House.  I can't seem to pass on any Jagr cards that I don't already have, and the oddness of this one made it irresistible.  I think I'd trust Jaromir to lead us through this COVID crisis more so than the guy currently doing so, but this is a blog about sports cards so let's move on, shall we? 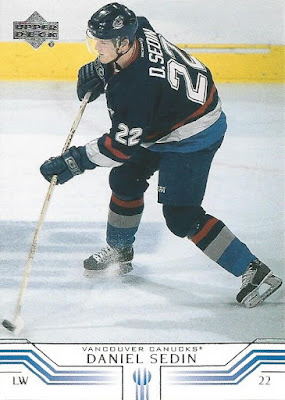 Each of the Sedin twins, Daniel... 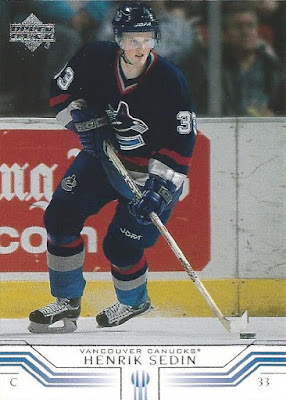 ...and Henrik!  Fresh-faced and with barely any NHL experience at this point (2000-01 was the first season in the NHL for these guys). 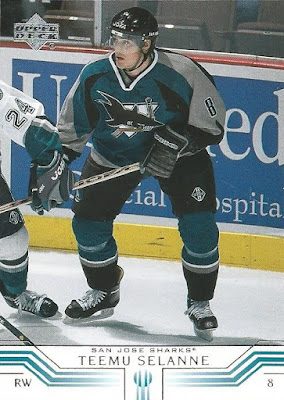 Teemu Selanne with the Sharks?!?!  Yeah, it happened.  For just a hair over two season there in Teemu's early 30s.  Great card commemorating one of the less-remembered stops on his NHL journey. 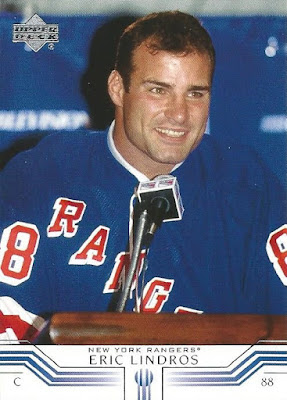 For whatever reason, Upper Deck gave collectors a whole lot of "press conference" shots in this set, featuring players who'd recently been dealt or signed with new teams.  After sitting out the entire 2000-01 season, Lindros moved to Manhattan for the 2001-02 campaign. 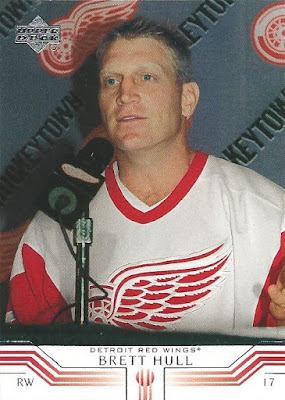 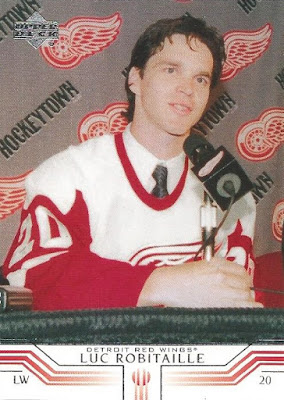 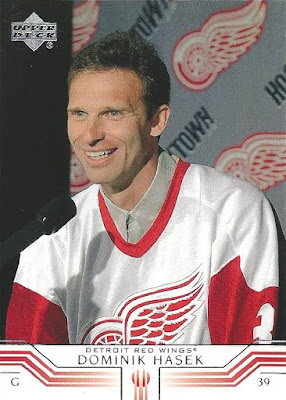 ...and one of the best goaltenders I've ever seen play, Dominik Hasek, who like Hull was 37 years old for the 2001-02 season.  How'd it work out for the Wings?  Well, they won the Stanley Cup in 2002, so I'd say pretty damn well.  I thought this trio of cards representing their "aged" off-season additions that season was kind of cool. 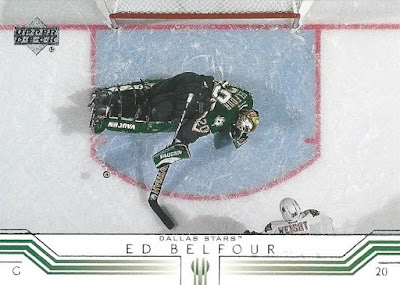 Last but not least, just a fantastic overhead shot on this Eddie Belfour.

Some fun cards there, thanks for joining me in taking a peek at these random new additions to my hockey collection.  I'll be back tomorrow with more new card content, until then thanks as always for stopping by!
Posted by shoeboxlegends at 7:00 PM

Jagr as a Cap? Lindros as a Ranger? Selanne as a Shark? Hull and Robitaille as Red Wings?

What is this madness?

I remember Teemu with the Sharks. I wasn't really a fan of Teemu when he was with the Ducks and things didn't really change when he became a Shark. I met him at a Ducks Casino Night and he was one of the least personable players I met... although he was very nice to the ladies attending the event.

I've cut back on spending this year... but my last two eBay purchases involved hockey cards. Not sure they'll ever make they're way onto the blog though since I don't have very many readers interested in hockey cards. :(

Those are some nice shots on the Belfour and Jagr cards (but those particular Caps unis still make me cringe). It comes as no surprise to those that know me that the 1976/77 Mahovlich is my favorite of the bunch.