Today I add a hockey player to the non-baseball collection who absolutely belongs there.  One of the great old-time NHL players, and certainly one of the all-time best Chicago Blackhawks... 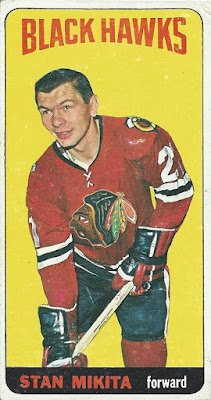 ...it's Stan Mikita!  If you've followed my blog for any length of time then you know that I absolutely adore the various 1960s/70s 'tallboy' sets that Topps produced.  On the hockey front, these card dimensions were used for just one year, 1964-65.  I've got well over a dozen of these now and will be closing in on two dozen soon, but Stan the Man here is the best of the bunch I'd say.

He's a little dinged up, but great visual appeal overall for a card that's pushed well past 50 years old now.  I love the contrast of the vibrant yellow background with the bright red 'Hawks gear.  I'll save you a complete write-up of Mikita's career and various accomplishments, that's not what you came here for anyway.  Suffice it to say he's widely regarded as the best NHL center of the 1960s, and I'm absolutely pumped to have this beauty in my collection. 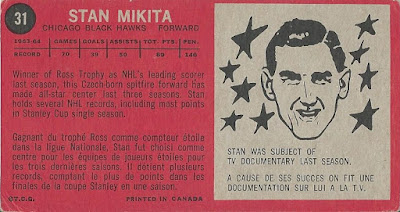 Here's a look at the back, though I have to say that's not much of a likeness there in the cartoon.  I've not heard of the documentary that's referenced here before, but I suppose that's not surprising given that I was still nearly a couple decades from even being born when this set was printed up.

I have a few other Mikita playing era cards, mostly from the '70s, but not many of his '60s releases.  I've yet to acquire his rookie card, which can be pricey, but aesthetically speaking this '64-65 is the better card of the two in my opinion anyway.  Certainly a card that I think merits inclusion on a list of my top 1,000 non-baseball cards!


The non-baseball Cardboard Keepers collection is up to 24 cards in size now, and can be viewed here.  I've still got a long way to go, with 976 cards remaining to be selected.  I'll be back soon with the next card or group of cards for the project, but until then thanks as always for stopping by!
Posted by shoeboxlegends at 6:00 PM

That's a beauty... certainly no arguing with this choice!

My artistic skills are just good enough that I can create a drawing that looks like *someone*, even if that someone is not the actual subject... which is to say, "Hey, I can draw a portrait that doesn't look like Stan Mikita!" Maybe I should be leaning into that more than I have been. :-D

He's one of maybe ten to fifteen guys I was familiar with prior to the late 80's when I started to learn about hockey history. Never watched him play, but I somehow knew he was a legend.