The Gallery of Heroes Pursuit is On!

Recently I showed off a sweet trio of Topps Gallery of Heroes inserts that I'd acquired for less than the cost of a blaster combined, with shipping included.  Chris the Collector asked in the comments if I had any plans on trying to complete the insert set.  Well, I certainly do! 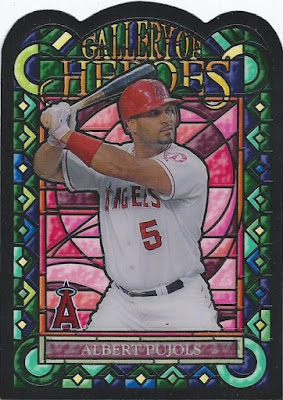 I'm really enamored with the creativity and overall beauty of these "stained glass" inserts from 2013 Topps Archives baseball.  That's why shortly after I got my initial trio in hand, and from the same seller, I picked up Albert Pujols here.  A future HOFer, for sure, and a great looking card, as they all are in this set. 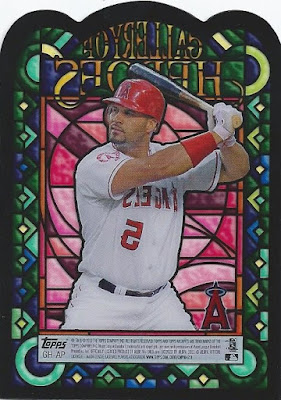 Here's the back, given that it's an acetate-type card it's just a mirror image of the front of course, as I've shown before.  That's not all though... 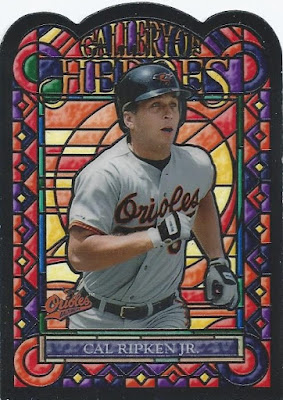 ...as the seller had one of my childhood favorite players available, Cal Ripken Jr!  I mentioned this previously, but one of the reasons I've gravitated towards these 2013 inserts rather than the late '90s/early 2000s cards they mimic, is that the 2013 release includes retired greats like Cal here. 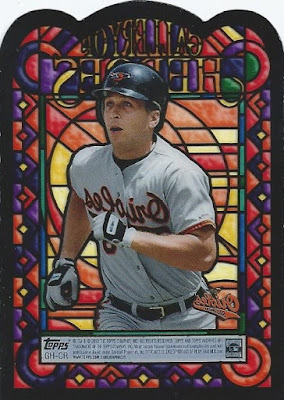 There's not much I can say about these cards that I haven't already covered in recent weeks.  I love the creativeness and bright, bold colors of the Gallery of Heroes line in general, and with retired stars included this 2013 revival is my favorite of them all.  I'm absolutely going to go for a set now, and in fact picked up a few others before my spending hiatus began in July.  With the five I've featured here so far I'm at 1/3 of a complete set already. 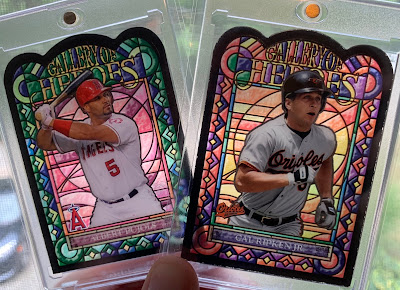 As I've done with the other cards I posted from this set, here's a look at Albert and Cal as they're meant to be enjoyed, in brand spankin' new Ultra Pro OneTouch magnetics with some nice back-lighting to accentuate the stained glass effect.

Yep, simply beautiful cards.  Can't wait to track down and feature the remaining ten here on the blog.  Until then, thanks as always for stopping by!
Posted by shoeboxlegends at 6:00 PM

These cards look great, I don't know how I missed them when they came out.

Congratulations! One third down. Two thirds to go. I feel like these would look fantastic displayed in a window sill or something.

One of the best inserts of all-time.

These are fantastic cards... Just a little too pricey for me to chase, otherwise I'd be going after the set myself.

These are great inserts! I made a run at a Trout a few weeks back, but it ended higher than I wanted to go. Good luck on the pursuit of the set.