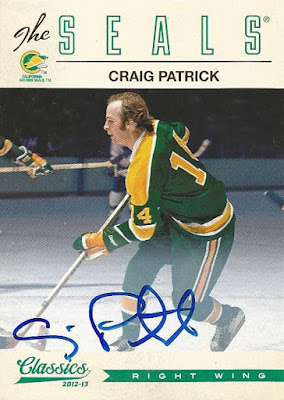 Panini's 2012-13 "Classics Signatures" remains one of my favorite hockey sets to be released since I returned to collecting back in 2007.  I went a little nuts collecting the on-card autographs from the set for a few years there.  I reached the point where I had every single standard autograph, and quite a few of the SSPs, and finally trailed off when the few remaining SSPs I needed were either never spotted in the wild, or prohibitively expensive. 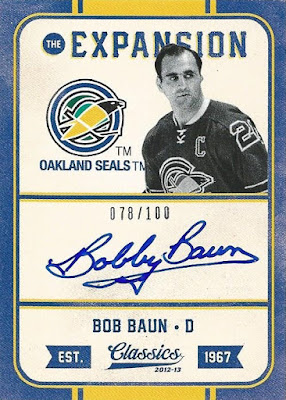 Bobby Baun is most remembered as a long-time defenseman for the Maple Leafs, a franchise where he won no fewer than four Stanley Cups throughout the '60s.  When the team left him unprotected in the 1967 NHL Expansion Draft, he was grabbed by the Oakland Seals (thus the fitting name for this autograph set).

Baun did not exactly enjoy his time with Oakland, and demanded a trade back to an Original 6 club after just one unsuccessful season.  Pretty awesome to have a "short term stop" autograph that also features a long-gone franchise as well.  Add to that Bobby's absolutely stunning penmanship, and you've got a real winner of a card. 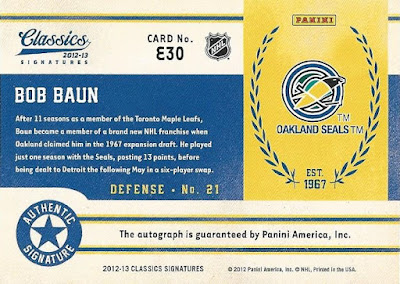 Here's the back, with the write-up featuring the expansion draft selection that I mentioned.  Another great look at the Oakland Seals logo as well.  Panini did a great job with all of the card backs from this release if you ask me.  The bright, bold colors are easy on the eyes.

This one will pair quite nicely with my base autograph of Bobby from the set, which features him in more familiar Maple Leafs garb.  If I had to choose between the two though, I'd take this Seals one all day long.

Thanks as always for stopping by, and please check back throughout the week for new content as I continue with my goal of posting every single day for the month of July!
Posted by shoeboxlegends at 4:00 PM

Wow! Those are both absolutely amazing cards!

I always enjoy spotting a new Seal I've never seen before. Both of those autographs are fantastic. The 2012-13 Classics Signatures is one of the greatest autographed sets out there.